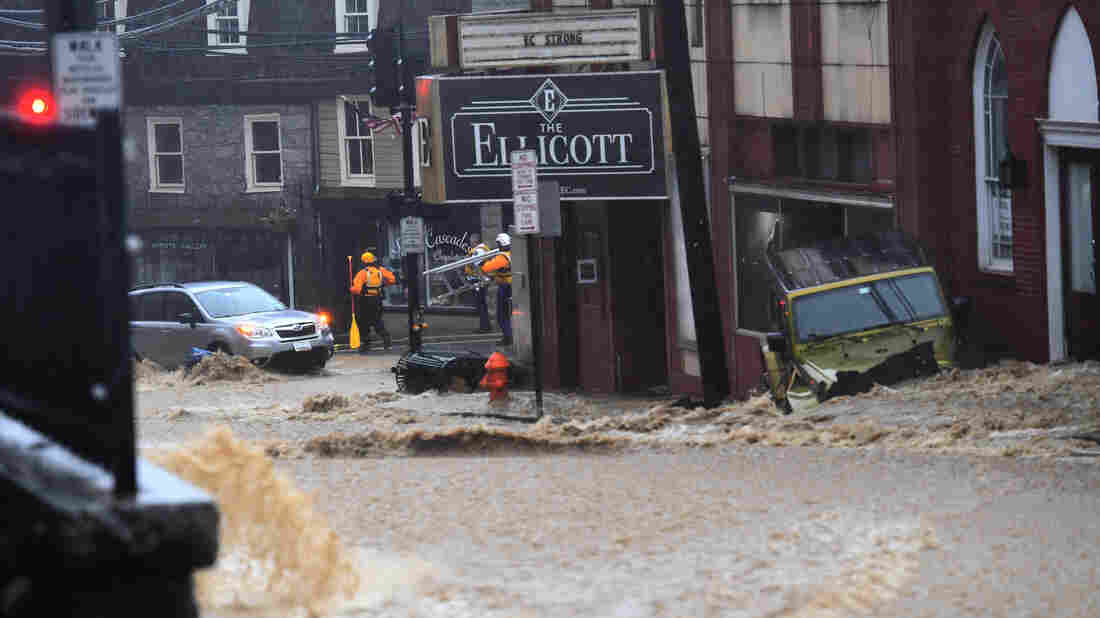 Ellicott City, Md.’s Main Street was turned into a raging river on Sunday, in a catastrophe that followed another flash flood in 2016. The water wrecked storefronts and left cars strewn amid debris on Monday. Katherine Frey/The Washington Post/Getty Images hide caption 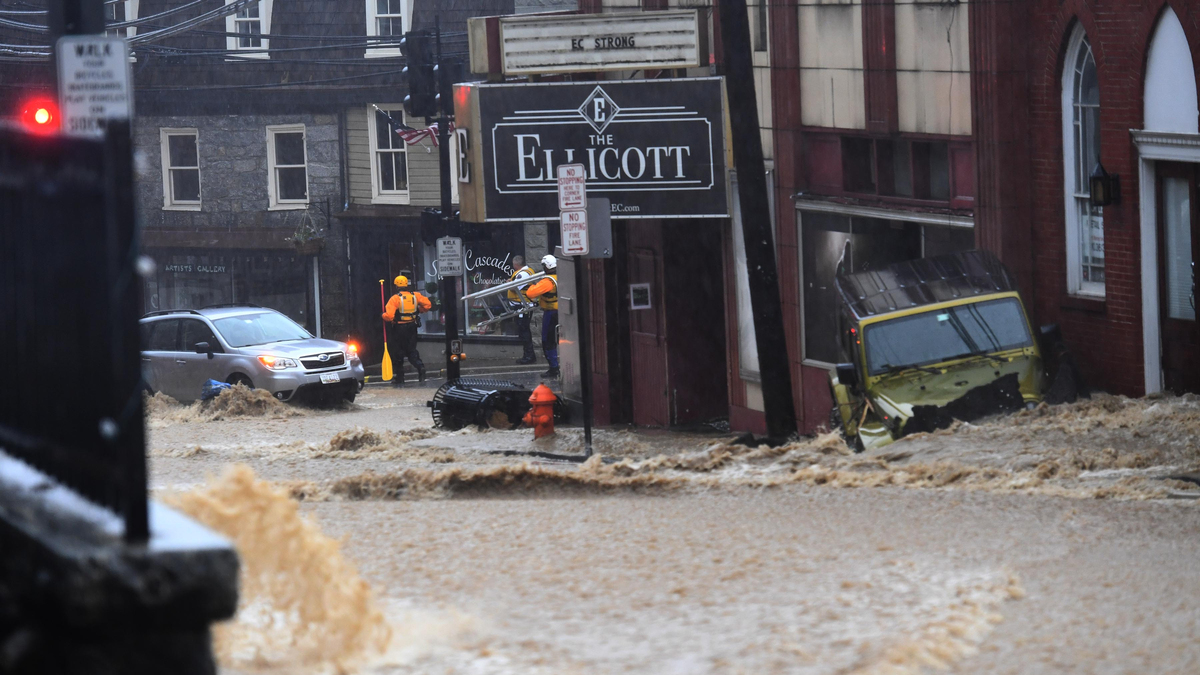 Ellicott City, Md.’s Main Street was turned into a raging river on Sunday, in a catastrophe that followed another flash flood in 2016. The water wrecked storefronts and left cars strewn amid debris on Monday.

Howard County Police say Eddison Hermond, 39, of Severn, Md., is unaccounted for; they’re asking the public to help find him. Washington-area radio news outlet WTOP describes Hermond as “an Air Force veteran and a member of the National Guard.”

A friend of Hermond’s told WTOP that the veteran had been in a restaurant in downtown Ellicott City on Sunday; witnesses said he was swept away after trying to help people.

Swiftwater rescue teams searched for Hermond last night, both on foot and in all-terrain vehicles – but the search was suspended and resumed on Monday, according to the Arbutus Volunteer Fire Department.

Founded in 1772, Ellicott City’s Main Street and downtown have been designated a historic district. The same area suffered massive flooding in 2016, when the city barely avoided having to tear down any buildings in a long and expensive rebuilding effort.

In that catastrophe in July of 2016, two people died in what was called a “once in a 1,000 years” event. But in 2018, it has happened again, devastating an area that, due to its valley setting, had endured other floods in the past.

this is eddison hermond. he was swept away in the ellicott city flooding yesterday around 5pm trying to help people and hasn’t been seen or heard from since. if you have any news, please contact me #EllicottCityFlood pic.twitter.com/moxxJm1Sjj

Rain storms in the area have been growing more intense in recent years, according to an expert who also says the flooding is linked to how the area’s land surface has changed.

“It’s heavily paved, there’s lots of narrow streets that act as very rapid conduits of water – so the flood was as much about the nature of the underlying land surface as it was the large amount of rain falling from the sky.”

Intense flooding hit the town’s Main Street in at least two waves on Sunday, shoving cars down the street and bursting through storefronts – including at several buildings where people found themselves suddenly trapped in stores and restaurants.

Images and video from the scene are striking, showing fast-moving water rising nearly as high as the bottom edge of the streets’ stop signs and obliterating anything in the torrent’s path.

One day after the flooding hit, people are reaching out to help. The Howard County government says anyone who wants to volunteer can register at its website – but that for now, the downtown area remains off-limits.

The Visit Ellicott City organization says a local non-profit called the Ellicott City Partnership is taking donations to help the community recover from the flood, as it did in 2016.

On Monday, conditions had dried out enough that salvage crews could begin towing vehicles that had been caught in the disaster.