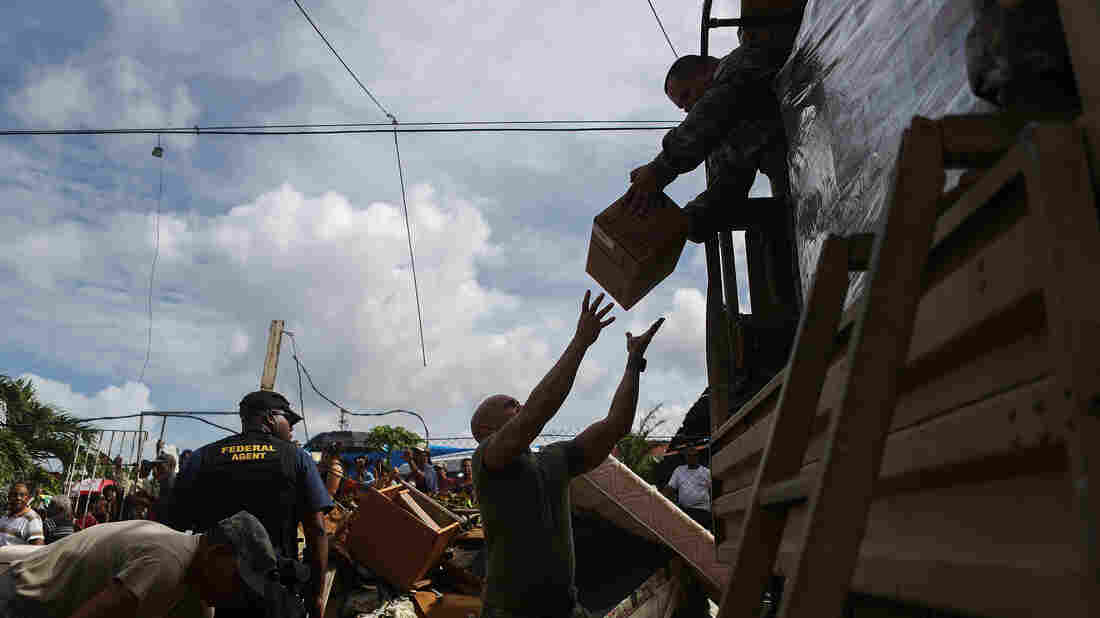 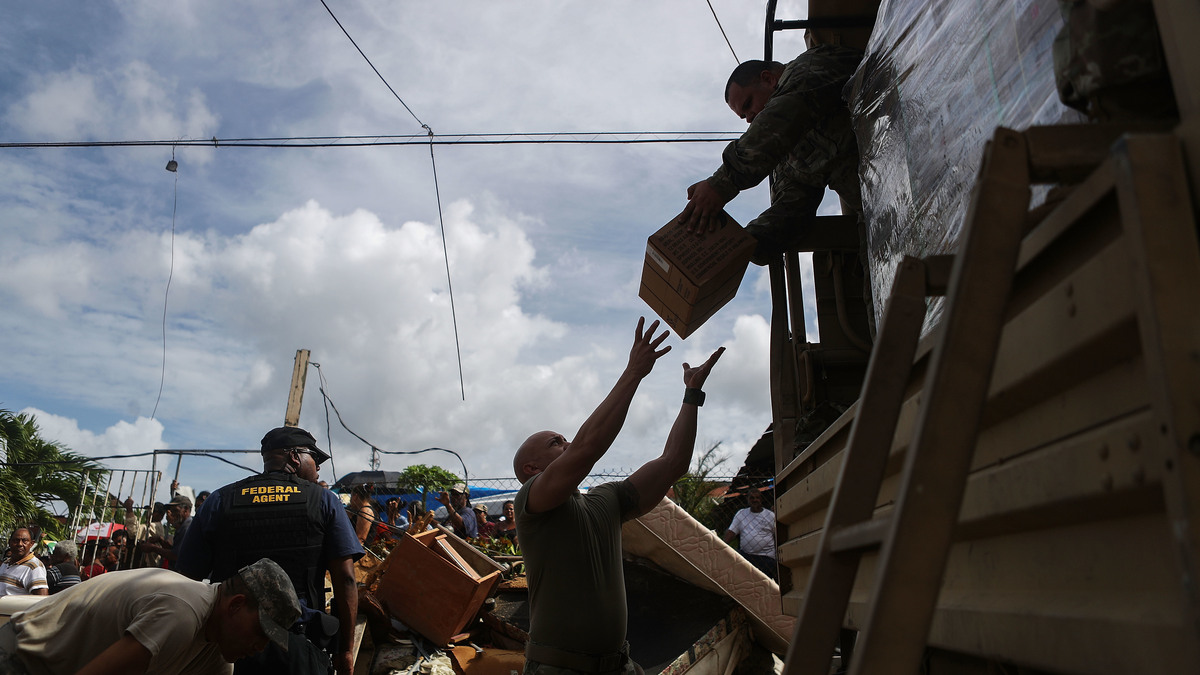 A month after Hurricane Maria hit Puerto Rico, Army Lt. Gen. Jeffrey Buchanan stepped off a helicopter in the town of Ceiba with a mission: Get relief supplies to people in need.

He and FEMA’s regional administrator, Thomas Von Essen, told the town’s mayor and other mayors from across the island that generators, plastic roofs and tarps would be there within days.

“There are 50,000 more blue tarps coming in over the next week,” Buchanan said. “So these will all get pushed to all the mayors.”

Von Essen added that FEMA had as many as 500 generators on the island before the storm and would soon distribute them.

But today, it’s clear none of those promises were kept, and FEMA and the federal government failed on multiple fronts to help the devastated island recover.

NPR and the PBS series Frontline examined hundreds of pages of internal documents and emails. Rather than a well-orchestrated effort, they paint a picture of a relief agency in chaos, struggling with key contracts, basic supplies and even its own workforce. 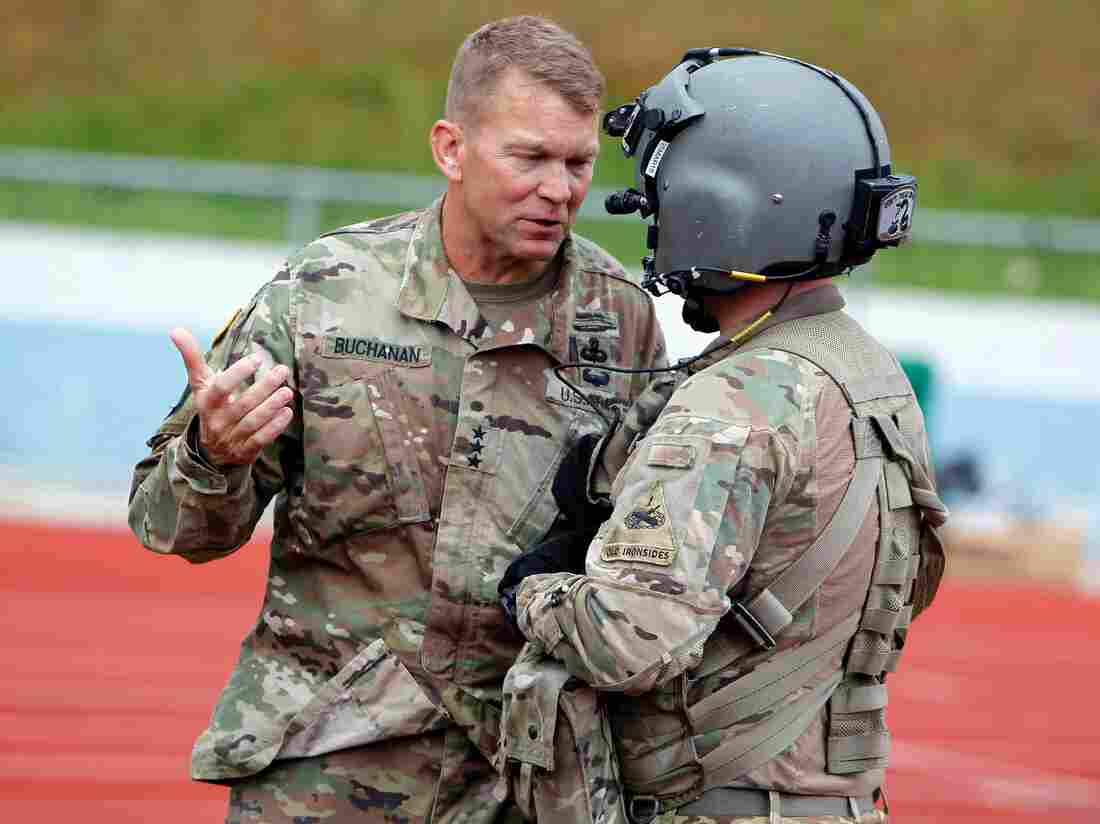 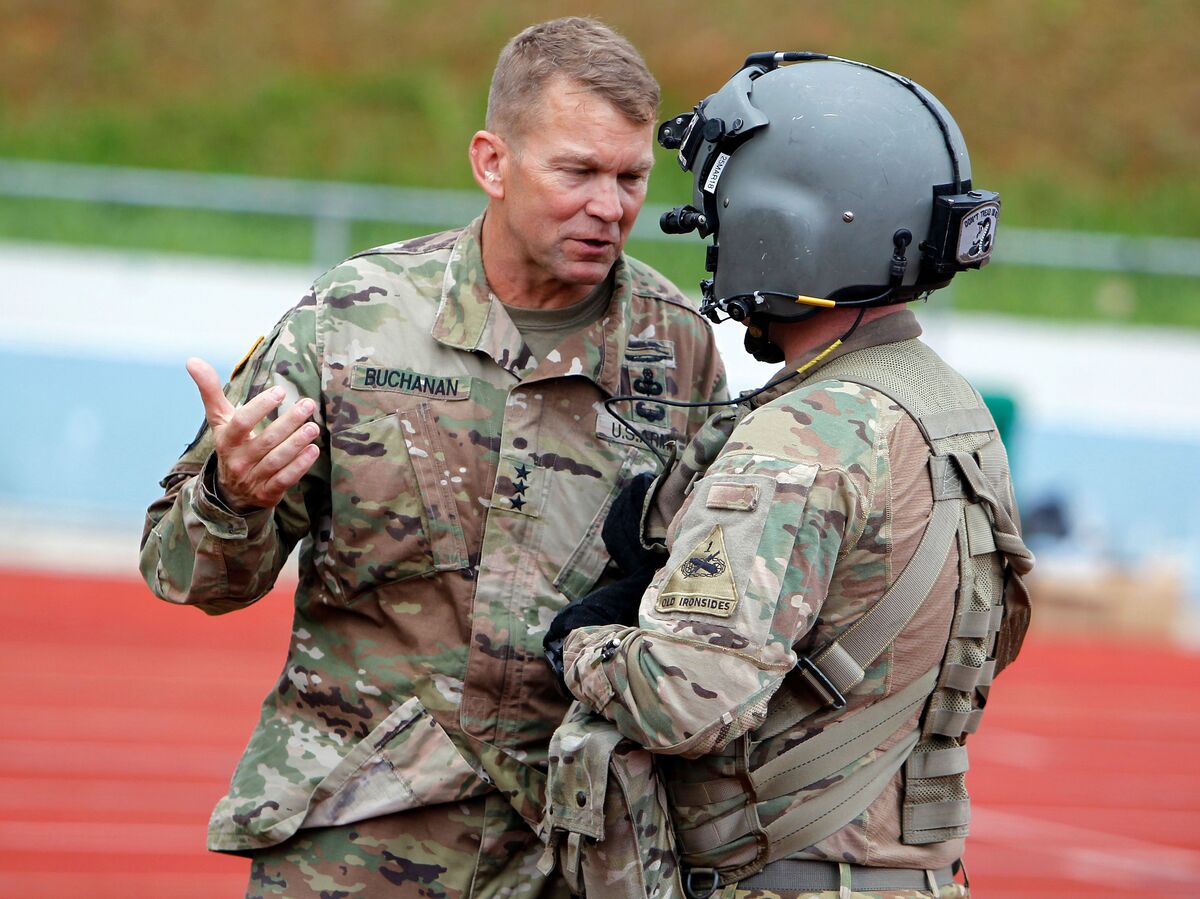 Internal briefing documents show FEMA never had 500 generators on the island before the storm — it had 25. Its plastic roof program was out of plastic, and the most tarps FEMA ever produced was 125,000 — months after people needed them.

“If there’s a villain here, it’s the 190 mph winds and the 50 inches of rain,” Byrne said. “That’s the villain. That’s what did the damage to the people. We’ve done nothing but try to remedy that.”

Still, as NPR and Frontline traveled the island in the months after the storm, it was clear many of the problems were man-made.

In Luquillo, Mayor Jesus Rodriguez said he had been waiting more than two months for FEMA to provide just seven generators that would power the town’s water pumps. He said he couldn’t understand what could hold up such a critical request in a town that had no running water.

“Water is life,” he said, frustrated.

In Piñones, William Torruella, a pastor, and his congregation spent weeks gathering supplies on their own to deliver to nearby towns. He said when FEMA arrived in Morovis, two months after the storm, he asked what had taken so long. Officials told him the roads to the town had been closed.

“They were not closed,” Torruella said, shaking his head. “I’ve been going there. The excuses do not explain what’s happening.”

Even an international disaster worker checking on survivors in Yabucoa in January was confused by the delays.

“We were pretty surprised to see how slow the response was [in Puerto Rico],” said Alice Thomas, a program manager with Refugees International, who has been to more than a dozen disasters. “Compared especially to major emergencies I’ve seen in foreign countries,” she said. “And we couldn’t get over particularly how bad the shelter response was.”

The seemingly simple process of distributing tarps to storm victims illustrates the problem. Thomas said storm victims need tarps in the first week or two if they hope to save their homes.

“Why they couldn’t get tarps, I do not know,” she said, adding that federal officials working on the ground called the tarp delays a “mystery.”

When asked what accounted for the delays, FEMA’s Byrne said it was difficult to get supplies to Puerto Rico because it’s an island.

“We had problems getting everything,” he said. “When you have to ship it, you have to add seven days or sometimes longer to everything that you want to bring in. It’s definitely a challenge.”

Yet 20 years ago, after Hurricane Georges hit the island, there weren’t reports of these logistical problems.

And the agency’s own records reflect a different picture.

According to planning and briefing documents, the agency did not pre-position enough supplies on the island before the storm, as federal rules require. The day Maria hit, agency records show, FEMA had fewer than 12,000 tarps on the island. Then, the agency failed to acquire more. 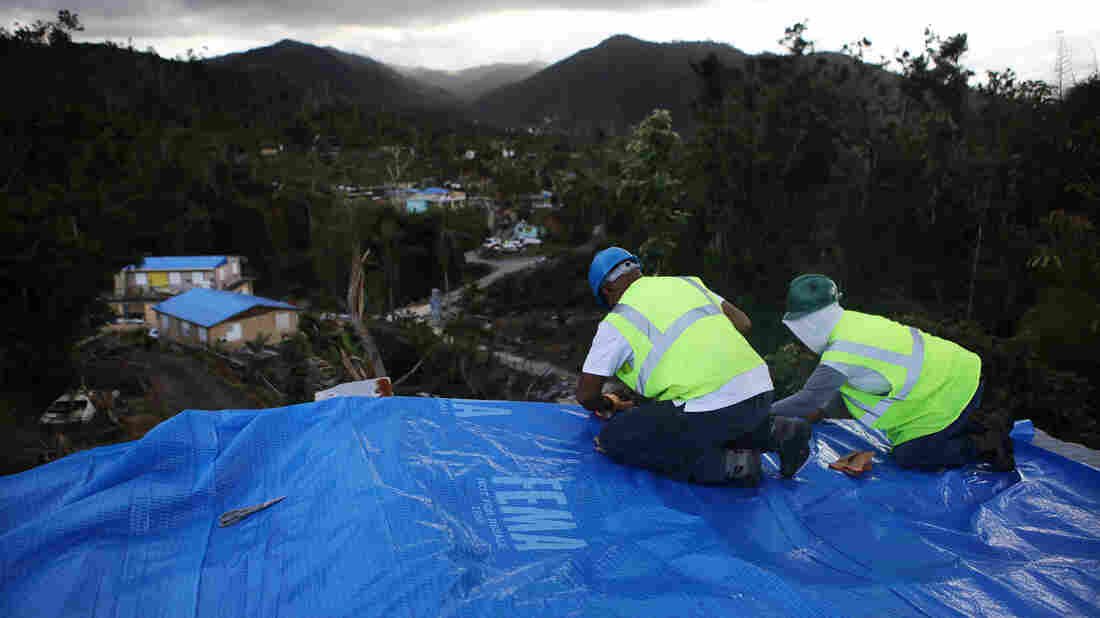 Contractors apply a FEMA tarp to a home in Morovis on Dec. 20, 2017, three months after it was damaged by Hurricane Maria. The day Maria hit, FEMA had fewer than 12,000 tarps on the island, far below what was needed. Mario Tama/Getty Images hide caption 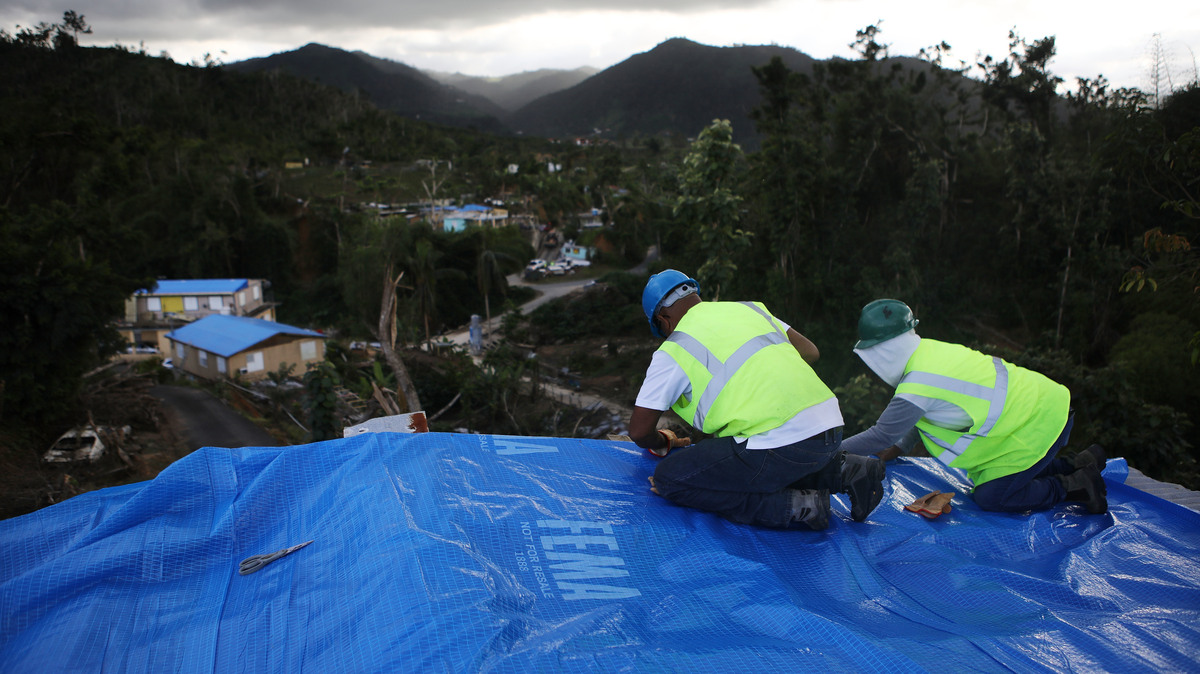 Contractors apply a FEMA tarp to a home in Morovis on Dec. 20, 2017, three months after it was damaged by Hurricane Maria. The day Maria hit, FEMA had fewer than 12,000 tarps on the island, far below what was needed.

Finally, FEMA turned to a third company, called Master Group. Its specialty, according to its website, is importing hookah tobacco. It produced some tarps, but when employees examined them in a warehouse in January, FEMA says, the tarps failed a quality-control inspection.

FEMA was also struggling with contracts to deliver food, diesel fuel and other supplies.

Byrne said these were just a few troubled contracts out of more than 2,000 that did not have problems.

“We had a couple of ones that didn’t work out well and we dealt with it,” Byrne said. “I continue [to] focus on getting it solved.”

Behind the scenes, though, some federal workers were discouraged. In one email, a top Army Corps official complained to FEMA managers, “We cannot survive any longer with any delay of materials,” the engineer wrote. “I cannot keep saying we are trying. … I need solutions.”

But FEMA didn’t have enough plastic sheeting on the island. In the first month after Hurricane Irma in Florida, records show, the Army Corps put up 4,500 blue roofs. In Puerto Rico, just 439.

“It goes back to how much material do you have?” said Lt. Gen. Todd Semonite, who oversees the Army Corps. “Almost all the warehouses were empty. So when we hit, the amount of available supplies, either generators, blue roof material, whatever it might be, were just not there … that could have gotten us more of a jump-start.” 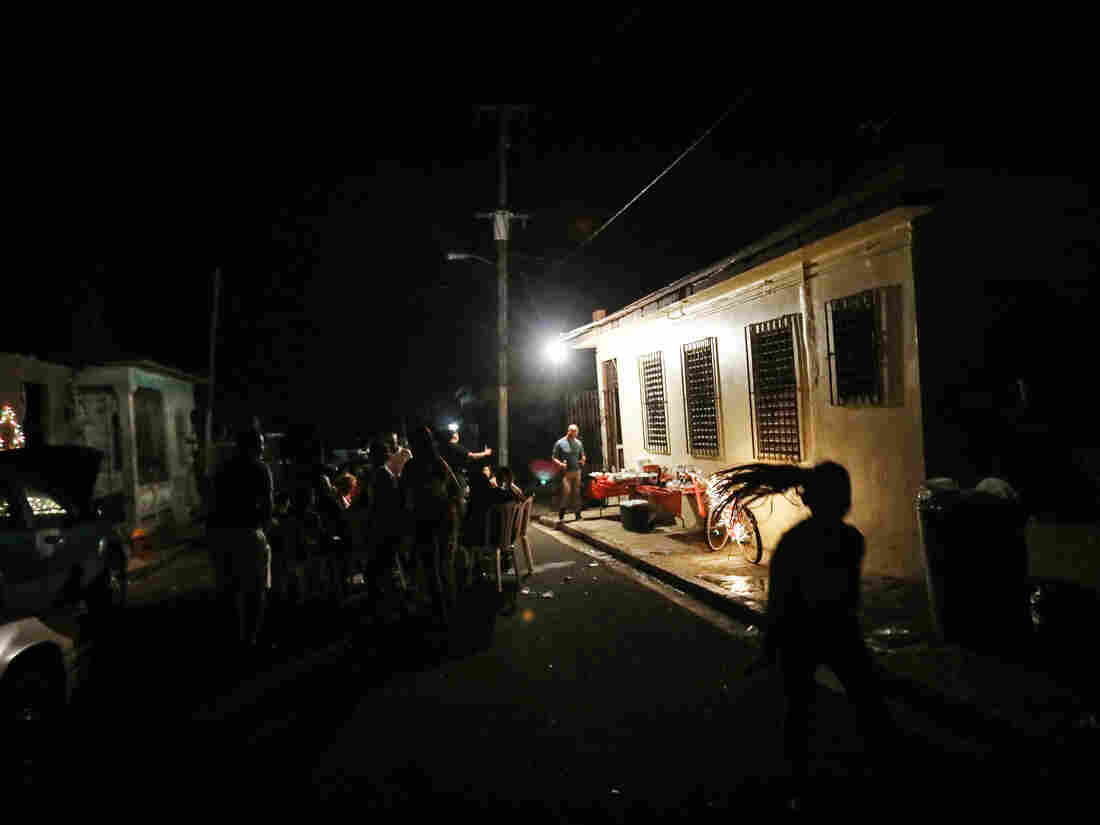 A car battery connected to an inverter and a generator provides power for a street party on a block without electricity on Dec. 24, 2017. Mario Tama/Getty Images hide caption 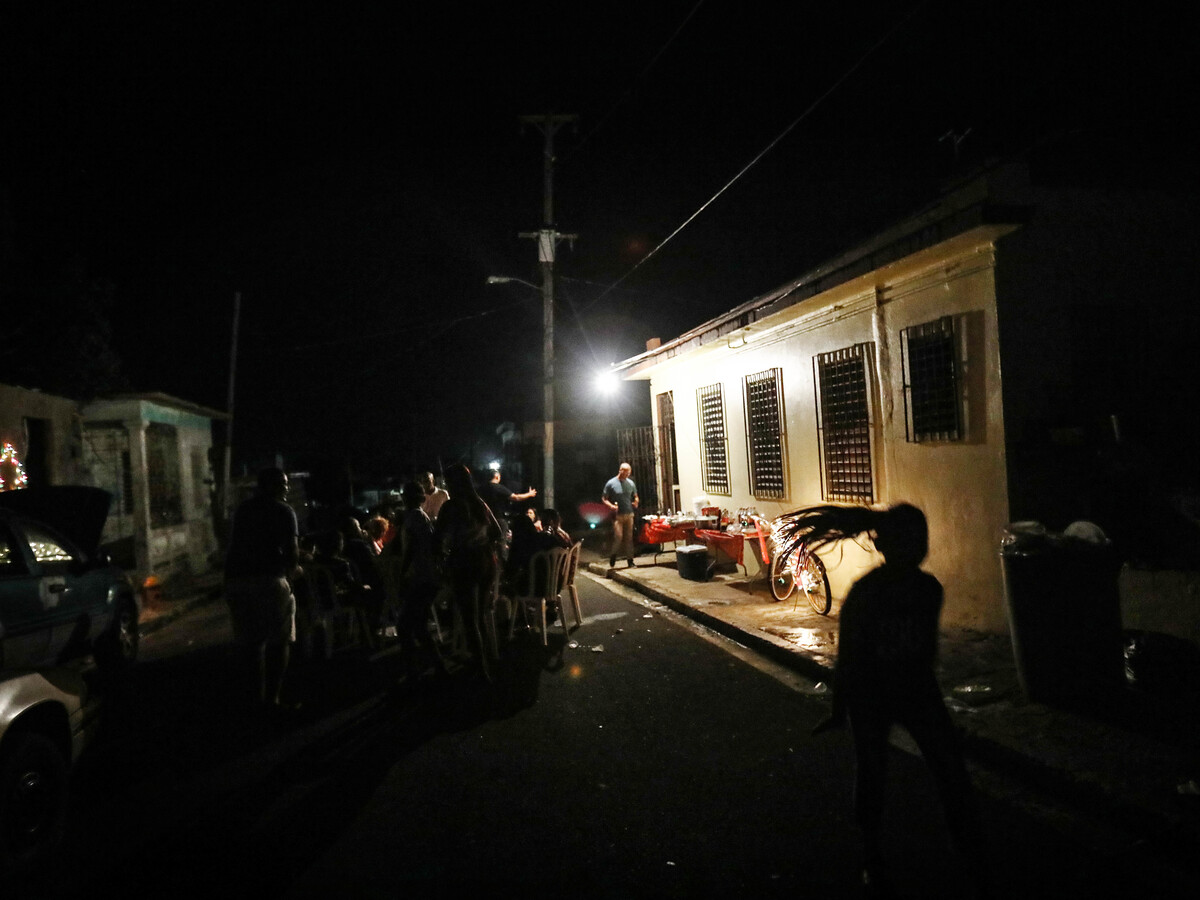 A car battery connected to an inverter and a generator provides power for a street party on a block without electricity on Dec. 24, 2017.

When it came to getting the lights on, federal officials chose a contractor named Fluor — a company with global experience building power generation plants but little experience rebuilding the grids that distribute power to communities. Government sources said they went with Fluor because it was a company they trusted, but they also described weeks of bureaucratic delays as the company got up to speed.

But that wasn’t all that was causing FEMA headaches. FEMA was struggling with its own staff. One internal staffing document reveals that more than a quarter of the staff FEMA hired to provide people assistance on the island was “untrained” and another quarter was “unqualified.”

Byrne bristles at the suggestion that FEMA didn’t help people.

“I think we’ve done a lot of support,” he said. “How can you look at the fact that we gave a billion dollars in assistance out, that we’ve given out 62 million liters of water, 52 million meals to the people. How can you categorize that as not providing assistance? I find that that doesn’t connect.”

Still, he said FEMA will learn from its mistakes. There were “a number of places where we weren’t perfect,” he said. “I’ll accept that. I’m going to keep working to get better.”

He had taken it upon himself to turn the lights on and had already restored power to 3,000 neighbors.

Oscar Carrión taught himself how to string up electrical wire and restored power to thousands in his town.

“I’m afraid of heights and of the electrical current,” he said in Spanish. “The first time I got up there, I was trembling all over. I still tremble.”

Carrión owns a grocery and has four kids. He has no experience working on power poles and doesn’t own any safety equipment. He and his neighbors pooled together $2,500 to buy an old rusted bucket truck.

On this day, the neighbors unwound wire along the street and Carrión worked pole to pole.

“I guess I am taking a risk,” he said, “but it’s difficult to live in the dark. We were tired of hearing that they can’t get to us. So we’ve decided to move forward on our own.”

As he got back into the truck, he paused for a minute and said, “If we don’t do it, nobody will do it for us.”

Emma Schwartz, Kate McCormick and Rick Young of Frontline and Justin Elliott of ProPublica contributed reporting to this article.