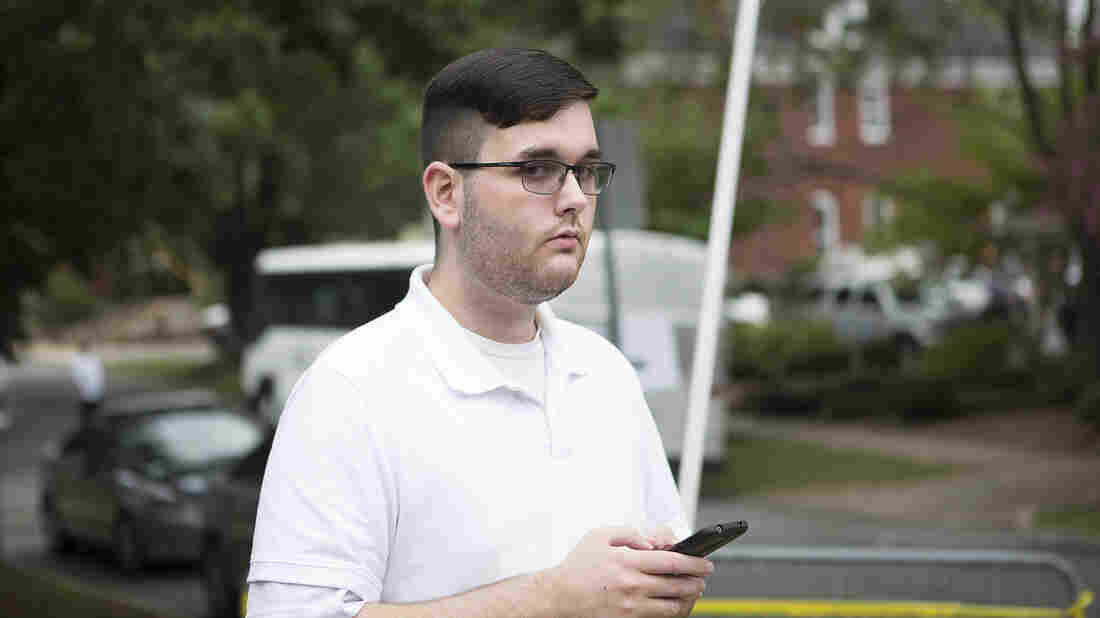 James Alex Fields Jr. stands on the sidewalk ahead of a rally in Charlottesville, Va., on Aug. 12, 2017. Later that day he is accused on ramming his car into a crowd of counterprotesters, killing Heather Heyer. On Wednesday he was charged with federal hate crimes. Eze Amos/AP hide caption 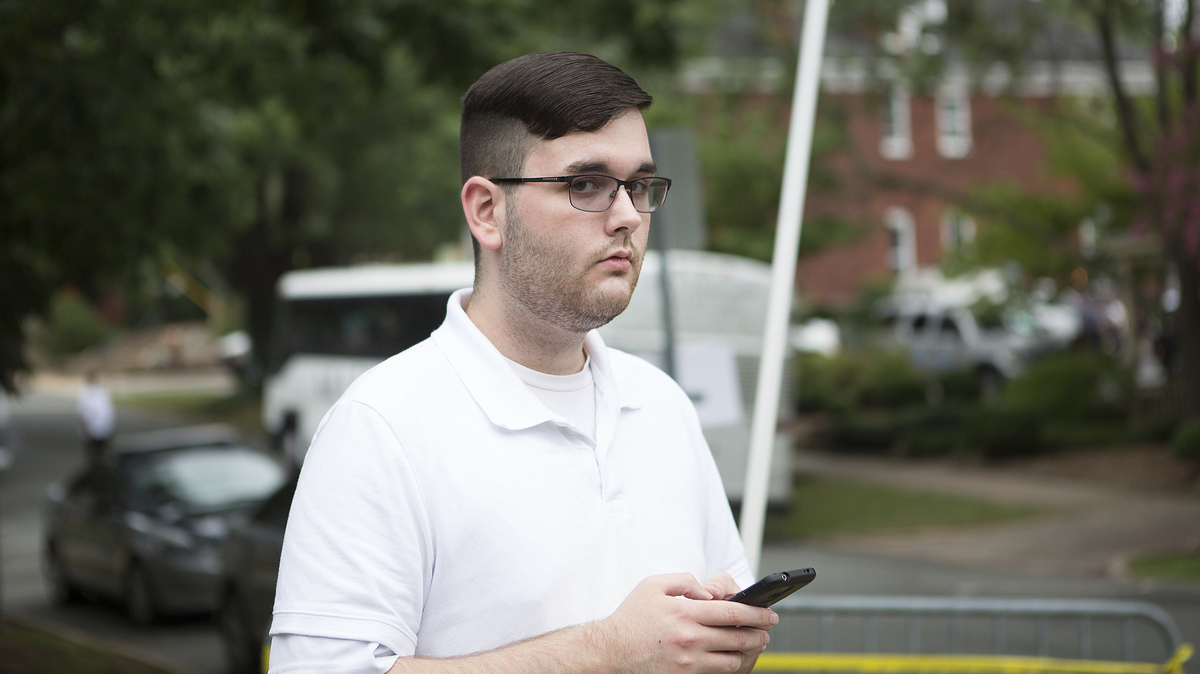 James Alex Fields Jr. stands on the sidewalk ahead of a rally in Charlottesville, Va., on Aug. 12, 2017. Later that day he is accused on ramming his car into a crowd of counterprotesters, killing Heather Heyer. On Wednesday he was charged with federal hate crimes.

The Justice Department announced Wednesday that a federal grand jury in Charlottesville charged James Alex Fields Jr. with one count of a hate crime act resulting in the death of Heather Heyer.

Heyer was demonstrating at the Aug. 12 counterprotest when authorities say Fields deliberately sped his gray Dodge Challenger into the crowd, killing the 32-year-old and injuring many others. Graphic video of the incident was shared on social media.

Fields was also charged Wednesday with 28 counts of hate crime acts causing injury and involving an attempt to kill.

In all of the cases, prosecutors say Fields willfully injured the victims because of their actual or perceived race, color, religion and national origin.

The federal charges were filed in addition to charges Fields was already facing in Virginia. He was arrested and charged with second-degree murder shortly after the incident, and in December a judge upgraded the charge to first-degree murder. Fields is set to stand trial on those charges in November.

It indicates that Fields demonstrated a history of racism having “expressed and promoted his belief that white people are superior to other races and peoples” via multiple social media accounts.

And as Fields prepared to leave his home in Maumee, Ohio, to drive to the Unite the Right rally some 550 miles away, prosecutors say he sent an ominous message to a relative.

A family member had texted him, urging him to be careful.

“We’re not the ones who need to be careful,” Fields responded, according to the indictment. Attached to the message was an image of Adolf Hitler.

Fields arrived in Charlottesville on Saturday, prosecutors say, and participated in the rally, chanting racist and anti-Semitic slogans.

He then returned to his car and watched a group of counterprotesters chanting and carrying signs promoting equality. As the crowd moved up Fourth Street, prosecutors say Fields reversed, then rapidly accelerated into them, only stopping once he struck another vehicle.

The Unite the Right rally was pegged as an opportunity for protesters to come out against the city’s decision to remove the Robert E. Lee statue in Emancipation Park and was widely promoted as a white supremacist event.

It devolved into violence from the onset.

A torch-lit rally a night earlier on the campus of the University of Virginia, saw marchers chanting racist slogans and scuffling with counterprotesters.

The violence continued at the main event on Saturday where two Virginia State troopers also died in a helicopter crash.

“Last summer’s violence in Charlottesville cut short a promising young life and shocked the nation,” Attorney General Jeff Sessions said in a statement Wednesday. “Today’s indictment should send a clear message to every would-be criminal in America that we aggressively prosecute violent crimes of hate that threaten the core principles of our nation.”

The rally spun out into a wider debate about race relations in the country.

President Trump faced heat for comments he made that appeared to equate the white supremacists with counterprotesters, saying “there’s blame on both sides” for the violence.

Sessions, however, emerged as an early voice denouncing the violence and saying the car crash that killed Heyer met the standard for “domestic terrorism.”

Sessions opened a civil rights investigation soon after the attack.