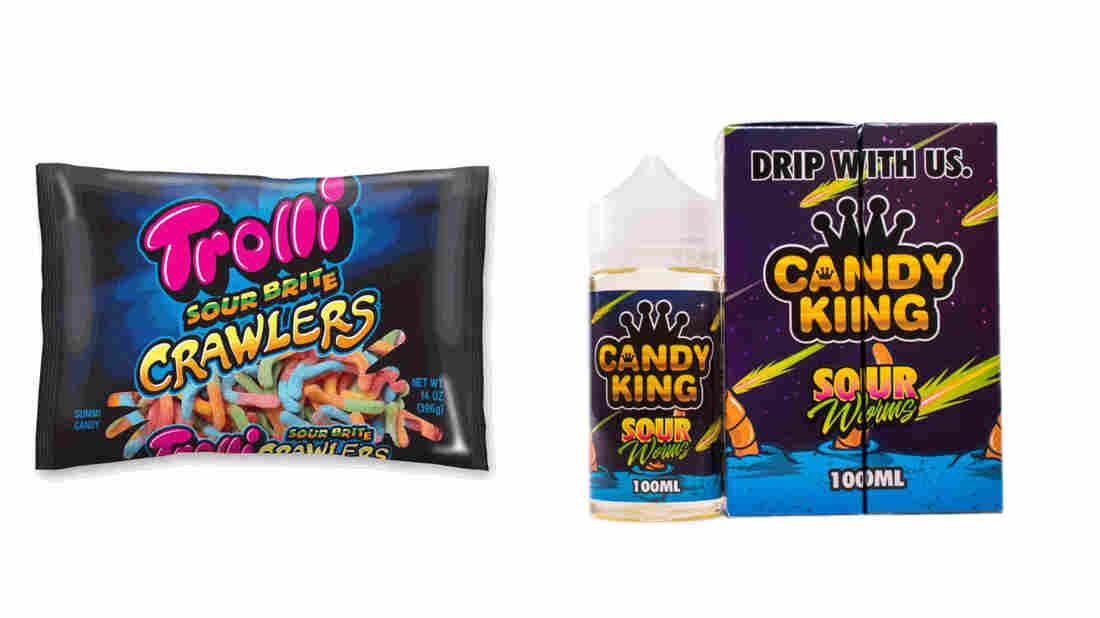 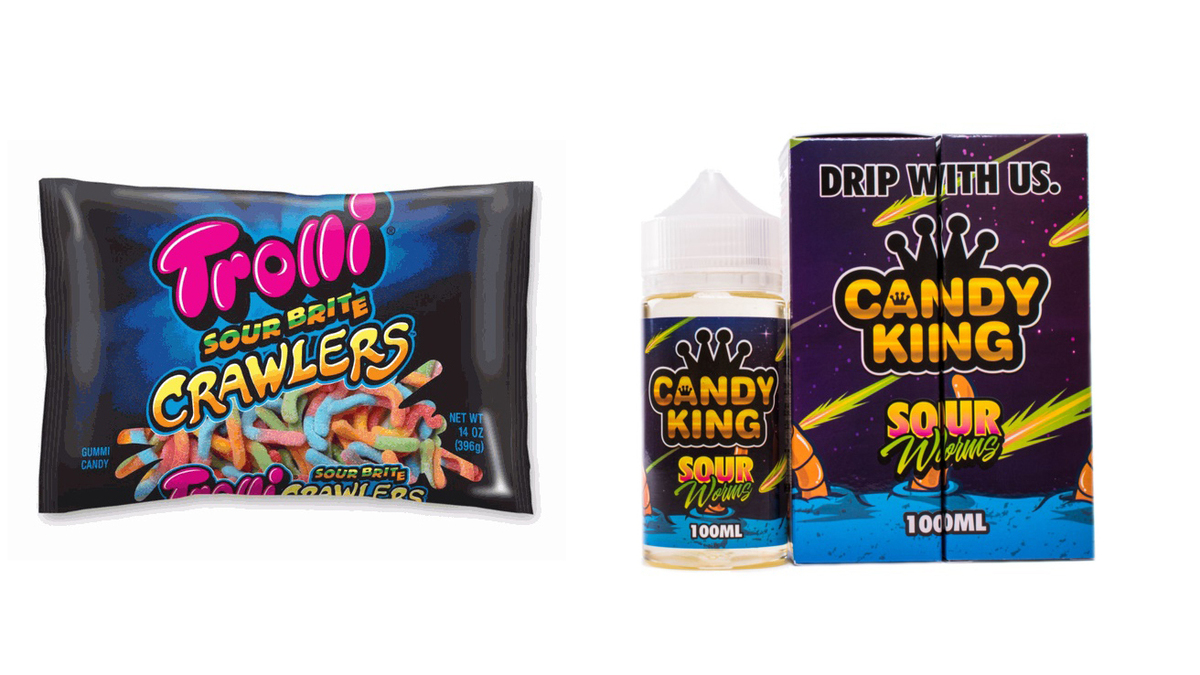 The Food and Drug Administration and Federal Trade Commission on Tuesday sent warning letters to 13 manufacturers, distributors and retailers of e-cigarette liquids. In a phone briefing for reporters, FDA Commissioner Scott Gottlieb said the companies are endangering kids by marketing the products to resemble juice boxes, cookies or candy.

“You look at the lollipop for example. I don’t see how my 4- or 5-year-old doesn’t just look at that and see a lollipop. It’s a lollipop,” he said.

E-liquids are used in electronic cigarettes, and they often use nicotine which can cause illness — even death — if ingested by a small child. Products targeted have names like Smurf Sauce and V’Nilla Cookies & Milk. 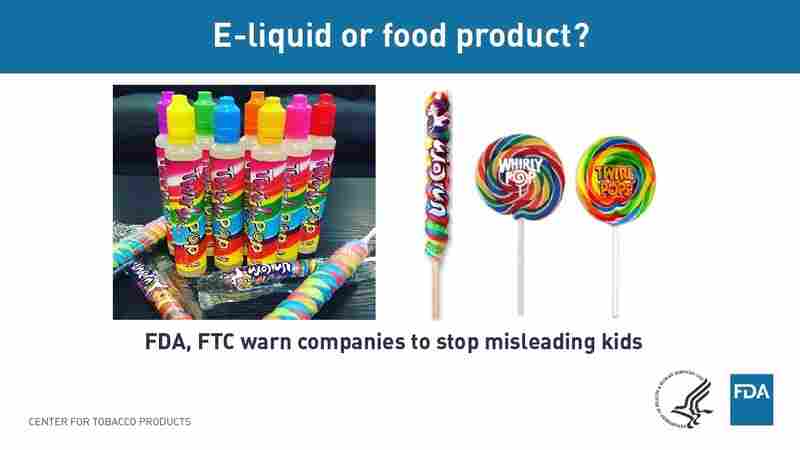 Two U.S. government agencies are warning companies that sell vaping products that their packaging resembles candy and may be in violation of safety and marketing guidelines because of its possible appeal to teens and children. Food and Drug Administration hide caption 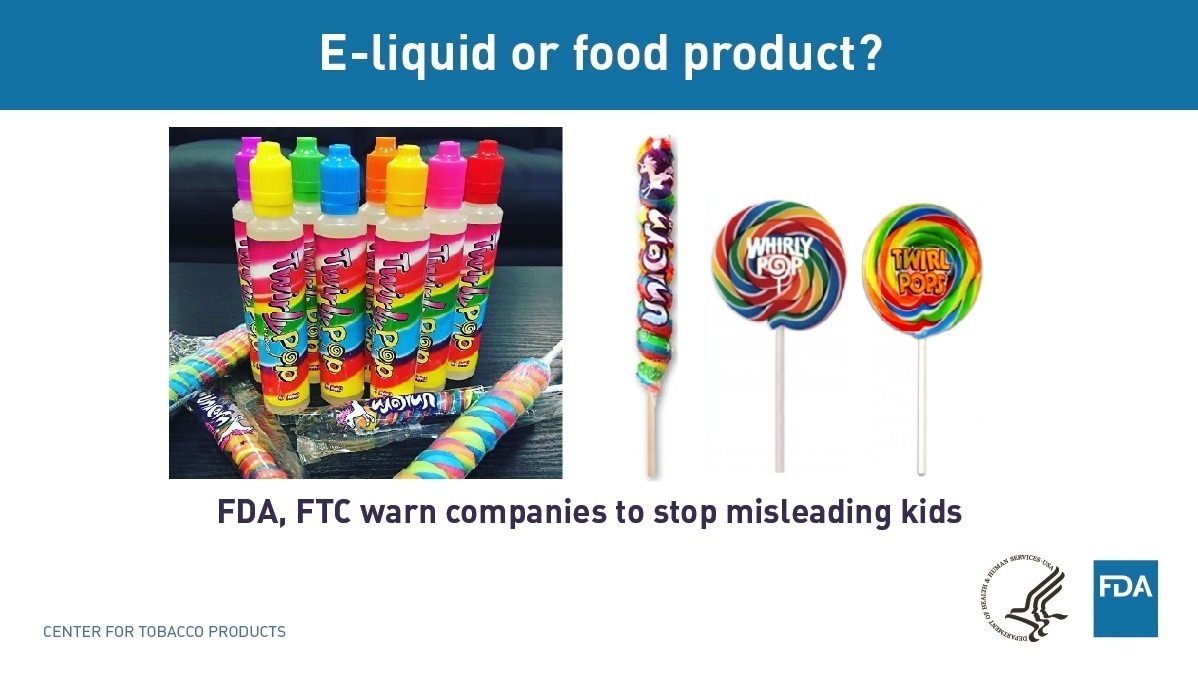 Two U.S. government agencies are warning companies that sell vaping products that their packaging resembles candy and may be in violation of safety and marketing guidelines because of its possible appeal to teens and children.

“These are being deliberately designed in ways that they can be just mistakenly confused by a child,” Gottlieb said in the briefing.

The agencies cited recent national data of thousands of nicotine exposures in kids younger than 6, who accidentally ingested the vaping liquid. The letters and violations vary somewhat by company but, overall, the letters say the products’ appeal to minors violates parts of the Federal Food, Drug and Cosmetic Act, which gives the FDA authority over marketing and distributing tobacco products.

“Today’s announcement should send a clear signal that companies selling these products have a responsibility to insure they aren’t putting children in harm’s way or enticing youth use,” Gottlieb said. He warned more actions would be coming.

Jameson Rodgers is vice president of business development for California-based NEwhere Inc., one of the companies that received a letter. He says his company’s products are only for adults who want to switch to vaping from traditional cigarettes, which he says are less healthful. The FDA targeted the company’s One Mad Hit Juice Box e-liquid. Rodgers says the company voluntarily removed it from distribution last year.

“We definitely didn’t intend to position it as a product that would appeal to anybody who wasn’t of legal smoking age,” he says, though he admits it might have sent a “questionable” message.

Ray Story, CEO of an industry trade group based in Georgia called the Tobacco Vapor Electronic Cigarette Association, says he welcomes the federal agency crackdown on what he calls “fly by night” companies targeting minors.

“Really would you buy a product, a vape with the name Dancing Monkey or Cotton Candy? At the end of the day we’re trying to create products that have the ability to compete against Big Tobacco,” he says. According to its website, TVECA is a nonprofit dedicated to “create a sensible and responsible electronic cigarette market” by providing education, communication and research to media, lawmakers and consumers.

Tuesday’s warning letters are part of a larger push by the federal government to crack down on youth access to tobacco products, including vaping. Last week the FDA sent a warning letter to 40 retail stores for selling the e-cigarette brand Juul to minors. They also asked the company for research on its appeal to children and teenagers. Health officials say Juul is highly addictive, and it’s so new there’s scant research about its health effects.

The companies targeted Tuesday have 15 days to respond — to either defend their practices or explain how they’ll change their labeling, or risk federal action such as fines or prosecution.

This story is part of a reporting partnership with NPR, Colorado Public Radio and Kaiser Health News.