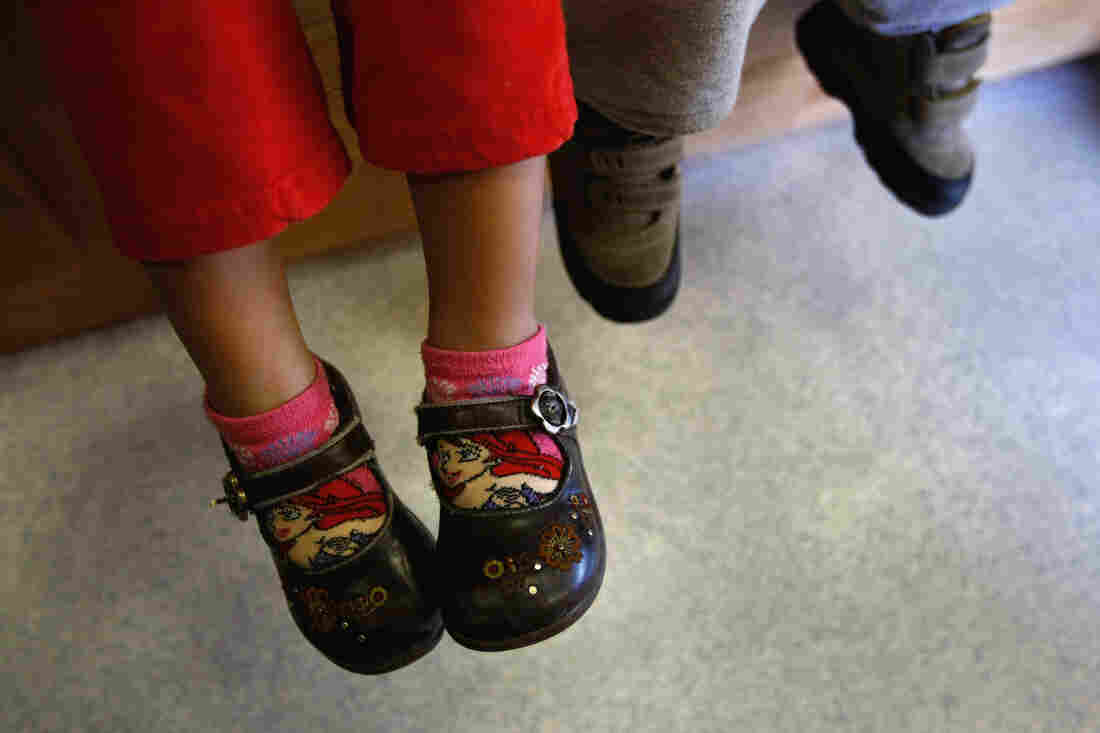 Children of Mexican immigrants wait to receive a free health checkup inside a mobile clinic at the Mexican Consulate in Denver, Colo., in 2009. The Trump administration wants to ratchet up scrutiny of the use of social services by immigrants. That’s already led some worried parents to avoid family health care. John Moore/Getty Images hide caption 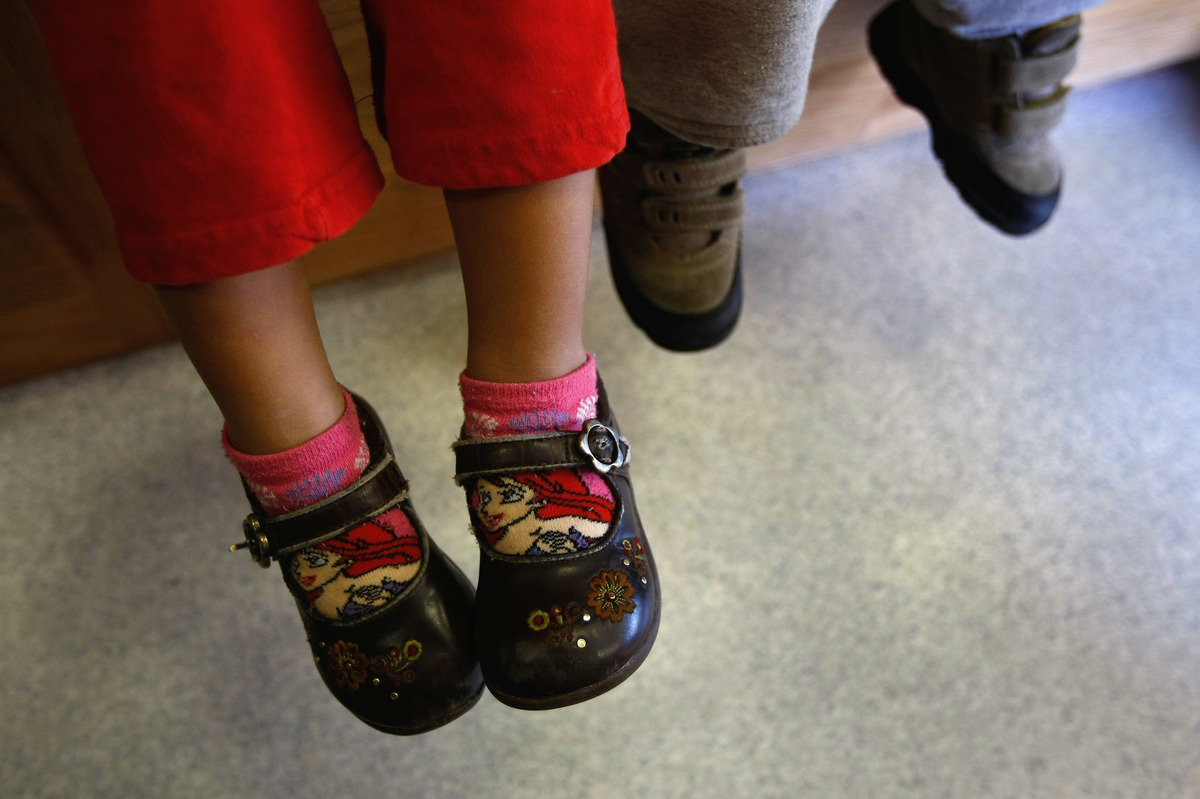 Children of Mexican immigrants wait to receive a free health checkup inside a mobile clinic at the Mexican Consulate in Denver, Colo., in 2009. The Trump administration wants to ratchet up scrutiny of the use of social services by immigrants. That’s already led some worried parents to avoid family health care.

As U.S. immigration enforcement becomes stricter under the Trump administration, more immigrant families are cutting ties with health care services and other critical government programs, according to child advocates who work with these families.

In Texas, researchers studying the issue say it’s a major reason why more children are going without health insurance.

Ana, who lives in Central Texas with her husband and two children, has been increasingly hesitant to seek help from the government. In particular, she’s worried about getting help for her 9-year-old daughter, Sara, who was diagnosed with autism a few years ago.

Ana entered the country without documentation about 10 years ago, which is why NPR has agreed not to use her last name. Both her children were born in the U.S. and have been covered by Medicaid for years. But ever since President Trump took office, Ana has only been using the program for basics — such as checkups and vaccinations for the kids.

This decision to forgo care comes at a cost. Managing Sara’s behavior has been challenging, even after the diagnosis brought some clarity about what was going on. Sara acts out and has tantrums, sometimes in public places. Ana finds it difficult to soothe her daughter, and it’s become more awkward as Sara grows.

“To other people, Sara just seems spoiled or a brat,” Ana says.

After the diagnosis, Ana felt unsure about her next steps. She eventually went to a nonprofit in Austin that guides and supports parents whose children have disabilities. It’s called Vela (“candle” in Spanish).

At Vela, Ana learned about a range of services Sara could get access to via her Medicaid plan — including therapy to help the child communicate better.

However, the thought of asking for more government services for her daughter increased Ana’s anxiety. “I am looking for groups who are not associated with the government,” Ana explains.

Ana is in the middle of the long, expensive legal process of applying for permanent resident status, known informally as a “green card.” Recently, the Trump administration announced that it may tighten part of this process – the “public charge” assessment. The assessment scrutinizes how many government services a green card applicant currently uses — or might use later in life. If a person uses many government services, they could pose a net financial burden on the federal budget — or so goes the rationale. The government’s algorithms are complex, but “public charge” is part of the determination for who gets a green card and who doesn’t.

The rule change proposed by the Trump administration — which may not come to pass — has already led many applicants, or would-be applicants, to be wary of all government services, even those that wouldn’t affect their applications.

“I am afraid they will not give me a legal resident status,” Ana says.

Her husband already has a green card, and the couple is determined to not jeopardize Ana’s ongoing application. So they have decided — just to be safe — to avoid seeking any more help from the government. That’s even though their daughter, who is a citizen, needs more therapy than she’s getting right now.

She says she would love to treat her daughter’s autism, but has decided that there is nothing more important than getting that green card, in order to keep the family together in the U.S.

“I’m running into families that, when it’s time for re-enrollment or reapplication, they are pausing and they are questioning if they should,” says Nadine Rueb, a clinical social worker dealing with Ana’s case at Vela.

Reub says a range of fears are behind immigrants avoidance of government services. Some are staying under the radar to avoid immediate deportation. Others are more like Ana — they just want to be in the best position possible to finally get permanent legal status and move on with their lives.

“The climate of fear is so pervasive at this point, and there is so much misinformation out there,” says Cheasty Anderson, a Senior Policy Associate with the Children’s Defense Fund in Texas.

Anderson thinks the parents’ fears have led to an uptick in children going without health coverage in Texas.

A recent study from Georgetown University’s Center for Children and Families found that one out of every five uninsured kids in the U.S. lives in Texas. And a big percentage of those uninsured children are Latino.

The report shows that after years of steady decline, the number (and percentage) of uninsured children in the U.S. increased in 2017, the first year of Trump’s presidency. Nationally, 5 percent of all kids are uninsured — and in Texas the rate rose to 10.7 percent, up from 9.8 percent in 2016.

Joan Alker, the author of the Georgetown report, says the Trump administration’s effort to crack down on both legal and illegal immigration is one of many factors driving up the uninsured rates. And it’s especially perceptible in Texas, where a quarter of children have a parent who is either undocumented, or who is trying to become a legal resident.

“For these mixed-status families, there is likely a heightened fear of interacting with the government, and this may be deterring them from signing up their eligible children up for government-sponsored health care,” Alker said in a phone call with reporters in November, when the report was released.

“Texas is proud to be Texas in so many ways, but this is one way in which we are failing ourselves,” she says.

From the perspective of Reub, a disability rights specialist, timing is an essential issue for these children.

For now, Ana says she’s relying on the services offered by her daughter’s public school — which aren’t counted in the federal government’s “public charge” assessment. And she’ll keep doing that until she gets that green card.

This story is part of NPR’s reporting partnership with KUT and Kaiser Health News.