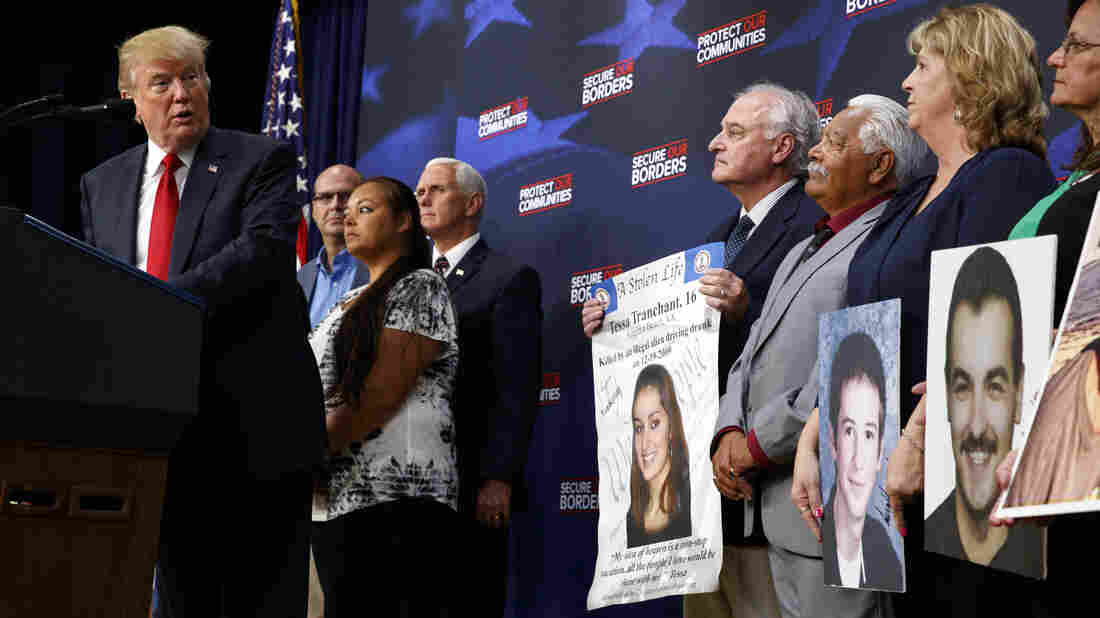 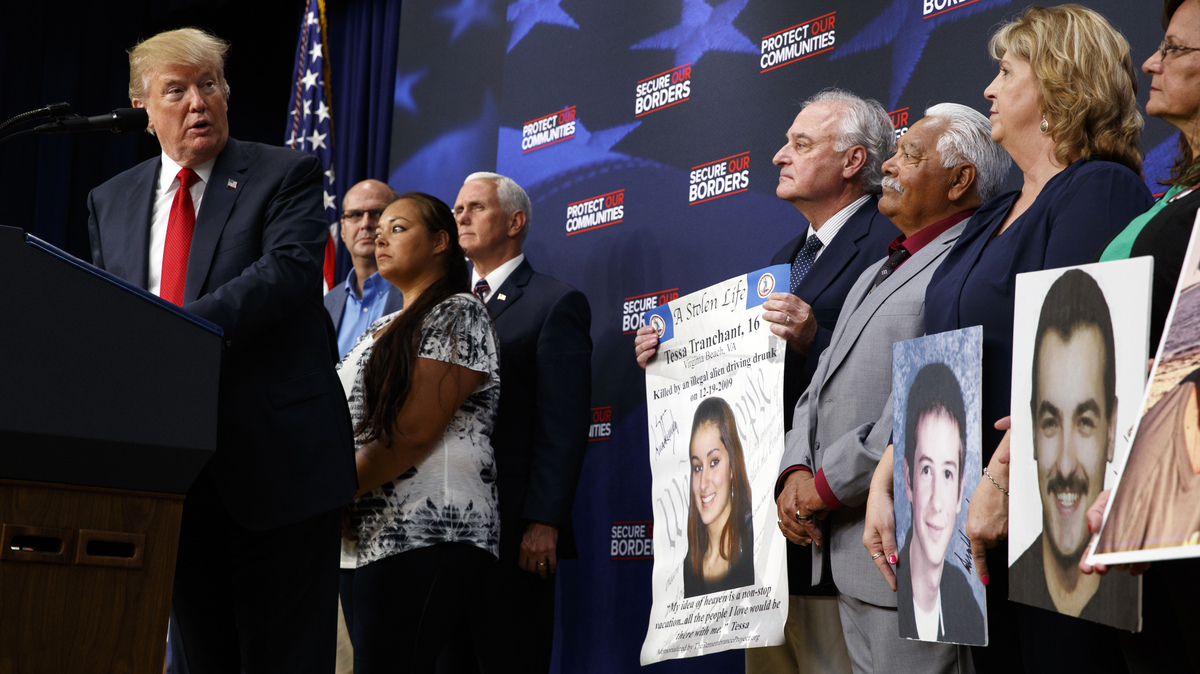 President Trump speaks about immigration alongside family members affected by crime committed by undocumented immigrants, at the South Court Auditorium on the White House complex Friday.

After days of damaging news stories about an administration policy that separated immigrant families at the southern border, President Trump tried to change the narrative Friday. He spoke up for grieving family members who’ve lost loved ones at the hands of people in the country illegally.

Trump has frequently pointed to sympathetic crime victims to justify his get-tough policies at the southern border. But experts say the president’s rhetoric overstates the threat posed by immigrants, who tend to commit crime at lower rates than people who are born in the United States.

The president was joined at the White House by more than a dozen parents whose children were killed — in some cases in traffic accidents — by immigrants in the country illegally. Their stories offered a counterpoint to those filling newspapers and television broadcasts this week of immigrant children forcibly separated from their parents after crossing the southern border illegally.

Trump reversed course and ended his family separation policy on Wednesday. But he vowed to continue a crackdown on illegal immigration, defying critics.

“They don’t talk about the death and destruction caused by people who shouldn’t be here,” the president said. “People that will continuously get into trouble and do bad things.”

During the 2016 campaign, Trump often highlighted the case of Kate Steinle, who was fatally shot in San Francisco by Jose Ines Garcia Zarate, a Mexican national who had repeatedly crossed the border illegally. Garcia Zarate was acquitted of second-degree murder last year. A California jury was apparently persuaded by the defense argument that the shooting was accidental.

The study found higher conviction rates among illegal immigrants for gambling, kidnapping, smuggling and vagrancy, but those offenses were rare and made up a tiny fraction of overall crime in Texas in 2015.

A separate March 2018 study in the journal Criminology looked at whether violent crime increases as the number of immigrants living illegally in a community goes up. Researchers found it does not. If anything, the opposite is true. Violent crime appears to fall when more immigrants are living in a community illegally.

Trump disputed those findings during his White House event Friday but he did not offer evidence to the contrary.

In the past, the president has exaggerated threats facing the U.S. to justify his travel ban, tough-on-crime measures and a now-folded commission on voter fraud.

In an interview with NPR last month, White House chief of staff John Kelly acknowledged that most people crossing the border illegally do not pose a security threat.

“The vast majority of the people that move illegally into the United States are not bad people,” Kelly said. “They’re not criminals. They’re not MS-13” gang members.

Kelly defended the administration’s southern border crackdown, however, arguing that immigrants coming from rural parts of Central America with little education might not easily assimilate into the United States.

“We must maintain a Strong Southern Border,” Trump tweeted Friday. “We cannot allow our country to be overrun by illegal immigrants as the Democrats tell their phony stories of sadness and grief.”

We must maintain a Strong Southern Border. We cannot allow our Country to be overrun by illegal immigrants as the Democrats tell their phony stories of sadness and grief, hoping it will help them in the elections. Obama and others had the same pictures, and did nothing about it!

The president made similar comments in a meeting with lawmakers earlier this week.

Illegal immigration at the southern border dropped off sharply in the early months of the Trump administration. But in recent months, the number of apprehensions has rebounded, driven in part by a growing number of children and families. Overall, the number of illegal border-crossers is still lower now than it was in 2014 and a fraction of what it was a decade earlier.