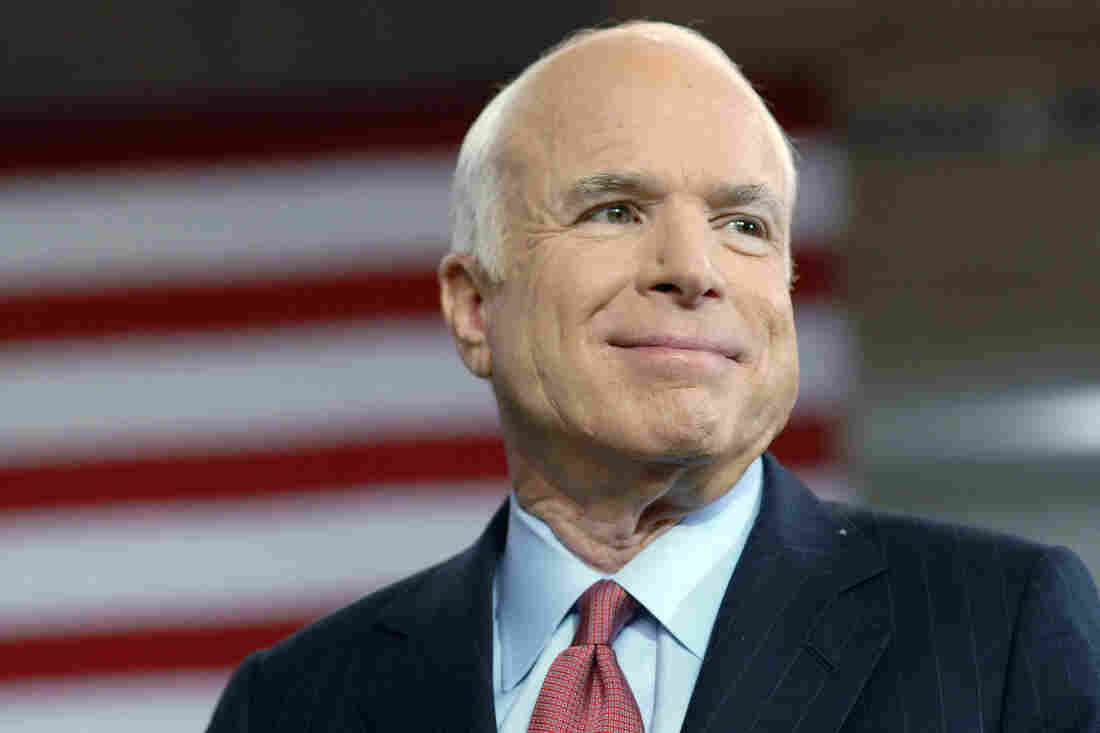 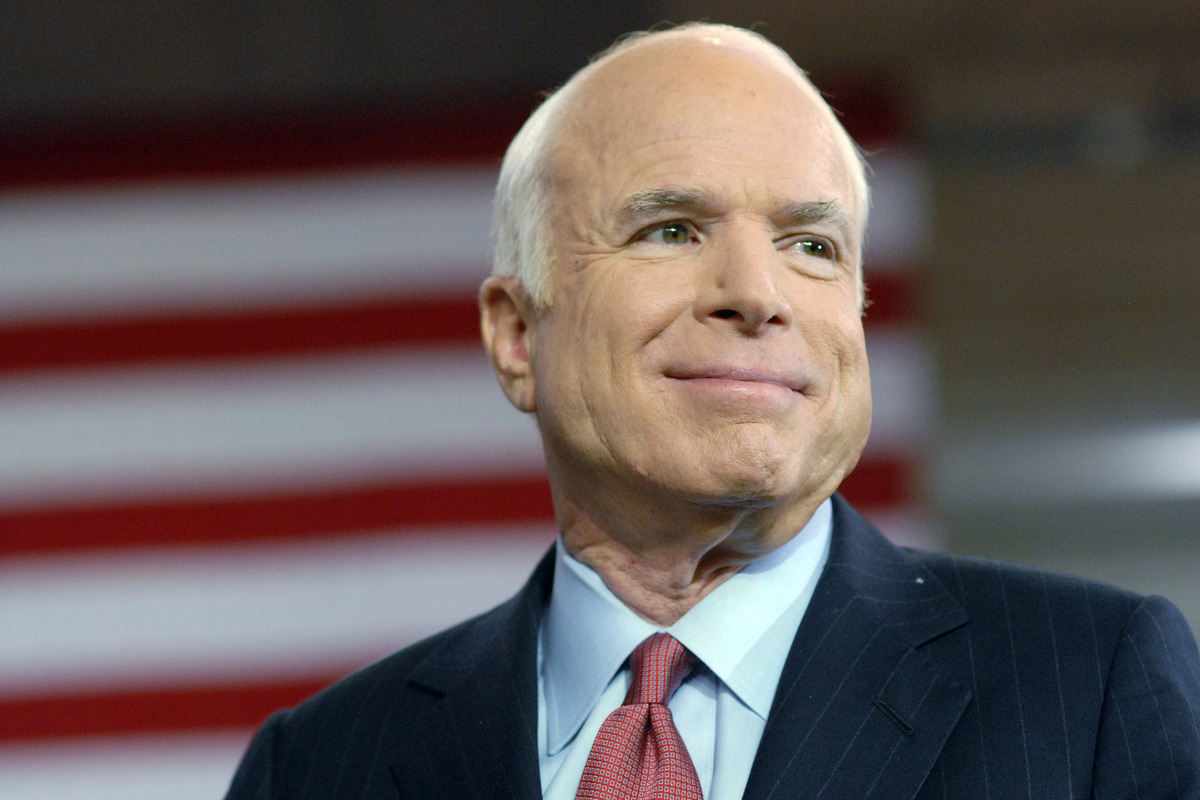 Arizona Sen. John McCain speaks at a town hall meeting in Pennsylvania during the 2008 presidential campaign.

Anyone who has followed the saga of Sen. John McCain or ever reacted with emotion to his words or actions will recognize the man speaking in this valedictory volume.

The voice and manner are familiar enough that we can almost hear and see him on every page.

It recalls his previous literary efforts (he’s written seven books with longtime collaborator Mark Salter), but it also ventures deeper into our collective memories of McCain and his world — as we prepare to part with both.

The Restless Wave is a plain-spoken and often painful personal accounting; a resume of a contentious career and a defense of controversial political decisions. It may inspire or enrage. But it is less an effort to provoke such conflicting responses than a paean to McCain’s idea of America.

McCain wants to celebrate the America he knew — or perhaps only imagined — in the full flower of its global preeminence. Call it heritage or call it myth, it is a concept of America that McCain clearly feels he personifies, and one he senses is passing even as he reaches the end of his own life.

At 81, he is battling the same kind of brain cancer that claimed his Senate friend and frequent antagonist, Ted Kennedy. McCain knows the odds, and even notes that he may not live to see this book published. 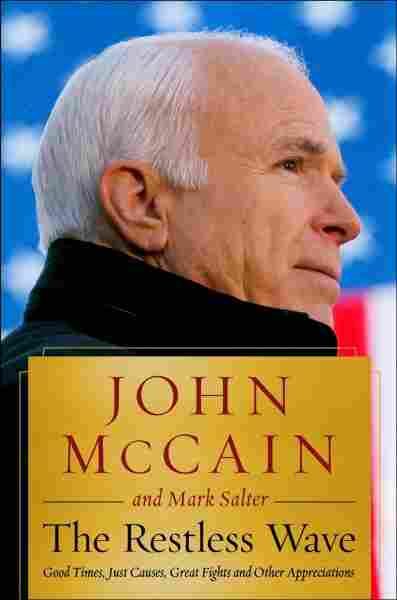 This is a man who should have leave to speak his mind. He has served more than 30 years in the U.S. Senate, after serving almost as long in the U.S. Navy. He suffered more than five years in a Vietnamese prisoner of war camp, ran twice for president as a Republican, once as his party’s nominee. Through it all, he has been stubbornly individual, at times cantankerous and even exasperating to friend and foe alike, relishing his political persona as “The Maverick.”

There are flashes of that McCain in Restless Wave. He lashes out at conservative talk show hosts and at those who use the Internet “to spread conspiracy theories and calumnies about candidates to people with an appetite for that sort of thing or an inability to discern what could be true from something spawned in the fever dreams of people who should probably seek psychiatric help.”

The Maverick moniker figured prominently in both McCain’s bids for president, in 2000 and 2008. But in this memoir, McCain picks up the narrative with the latter. He recalls his campaign’s near collapse in the previous summer, then revels in recalling how he climbed back to win the New Hampshire primary. He attributes his capture of the Republican nomination to his emphasis on the improving battlefield situation in Iraq.

But McCain’s march to the White House was blocked that Fall by the Barack Obama phenomenon and two major distractions. One was the mortgage-backed security crisis that tanked Wall Street and prompted an unpopular bailout for financial institutions and a deep recession for the U.S. economy. McCain bore no special responsibility for that campaign catastrophe, but he does own up to choosing Sarah Palin, his ill-fated running mate.

McCain recounts fighting with his campaign staff over his first pick, the Democratic Sen. Joe Lieberman of Connecticut, who had been Al Gore’s running mate in 2000. Relenting, McCain looks around as the Republican convention in St. Paul, Minn., looms. Desperate for a way to re-frame the election, McCain goes with the upstart, populist governor of Alaska.

“She was a popular, energetic and accomplished reformer as mayor, governor and as a campaigner,” McCain writes. He also thought she would appeal to Democrats who had preferred Hillary Clinton to Barack Obama in that year’s primaries. McCain notes her knockout speech at the party convention, but admits it was downhill thereafter.

“She stumbled in some interviews,” McCain relates, “and had a few misjudgments in the glare of the ceaseless spotlight. Those missteps too are on me. She didn’t put herself on the ticket. I did.”

The bulk of the book strives to re-litigate the major issues of the past dozen years, both before and after the 2008 campaign. We revisit the Iraq war, the use of “enhanced interrogation techniques” (which the administration of George W. Bush insisted on calling EITs and McCain calls torture), the surge that stabilized the situation and the later battles over how long the U.S. should stay. McCain also devotes a chapter to his repeated efforts at comprehensive immigration reform, an issue that united him with both Bush and with Kennedy, but put him at odds with much of his own party — including in his own state of Arizona.

He also devotes substantial space to the struggle he now sees defining U.S. foreign policy, which is the struggle against Russia — particularly against Russian President Vladimir Putin. He reminds us of his personal duels with Putin, who once said McCain had been driven mad by his years as a captive “kept in a pit” in Vietnam.

Here is where McCain finally gets serious about talking about the current U.S. president, who rates only passing mentions in the first 270 pages (there are roughly twice as many mentions of Putin). But what thoughts he does give to Donald Trump are troubled.

“I’m not sure what to make of President Trump’s convictions,” he writes, adding later, “He threatened to deliberately kill the spouses and children of terrorists, implying that an atrocity of that magnitude would show the world America’s toughness.”

He also has no use for the Trump stance on refugees. “The way he speaks about them is appalling, as though welfare or terrorism were the only purposes they could have in coming to our country.”

And: “His reaction to unflattering news stories, calling them ‘fake news’ whether they’re credible or not, is copied by autocrats who want to discredit and control a free press.”

Most of all, he is disturbed at what he sees as Trump’s tolerance of Putin, implying moral equivalence when Trump said, “We have a lot of killers too.” McCain responds: “It was a shameful thing to say, and so unaware of reality.”

McCain also makes repeated reference to Putin’s attacks on American democracy through the Internet, which he calls Putin’s revenge on Hillary Clinton for supporting popular protests against the regime in Russia: “[Putin] would seek revenge … by ordering his trolls and hackers and subcontractors at WikiLeaks to help defeat her.”

Another foreign policy issue especially salient for McCain regards torture and its use by the U.S. in the war on terror. He examines the efforts of Vice President Dick Cheney and others in the administration of President George W. Bush to overcome McCain’s opposition to anti-terror tactics he regarded as torture. Drawing on his hellish experiences in Vietnam as a torture victim, McCain explains why torture is likely to produce misleading or faulty intelligence. But his real point is that torture betrays the American ideals for which he and countless others have risked or sacrificed their lives.

At one point, McCain quotes a letter he received from an Army captain who was disturbed at reports of the U.S. using torture on suspected terrorists. The captain writes, “I would rather die fighting than give up the smallest part of the idea that is America.” And McCain adds, “If there is a finer declaration of an American duty and sense of honor, I haven’t heard it.”

It is framed by a deep commitment to the military and to the traditions of McCain’s own family. Descendants of a man who settled in the Mississippi Delta in the mid-19th century, the 20th-century McCains produced two Navy admirals (the senator’s father and grandfather). The latter stood on the deck of the U.S.S. Missouri at the surrender ceremony that ended World War II. He witnessed the beginning of an American era unlike any before it. His grandson has written a tribute to that era, to his own place in it and to his hopes for its future.

McCain also renews his crusade to rein in the campaign finance excesses of the 1990s and beyond, a surge in political spending that beggars the imagination and threatens to upend the electoral system entirely. And he writes at length about the thought process and emotional struggle that led to his vote against his own party’s signature legislation in 2017, the repeal of Obamacare.

At its best, the prose in The Restless Wave has some of the terse effectiveness we associate with the 20th-century writer Ernest Hemingway. And on his final page, McCain returns to the model of the Hemingway character he calls his hero, Robert Jordan of For Whom the Bell Tolls. That novel ends with Jordan lying wounded on open ground, armed to fight one last battle that he knows will end with his death. “The world is a fine place and worth the fighting for,” Jordan says to himself, “and I hate very much to leave it.”

To this, McCain adds his own response: “And I do too. I hate to leave it. But I don’t have a complaint. Not one. It’s been quite a ride. … I made a small place for myself in the story of America and the history of my times.”