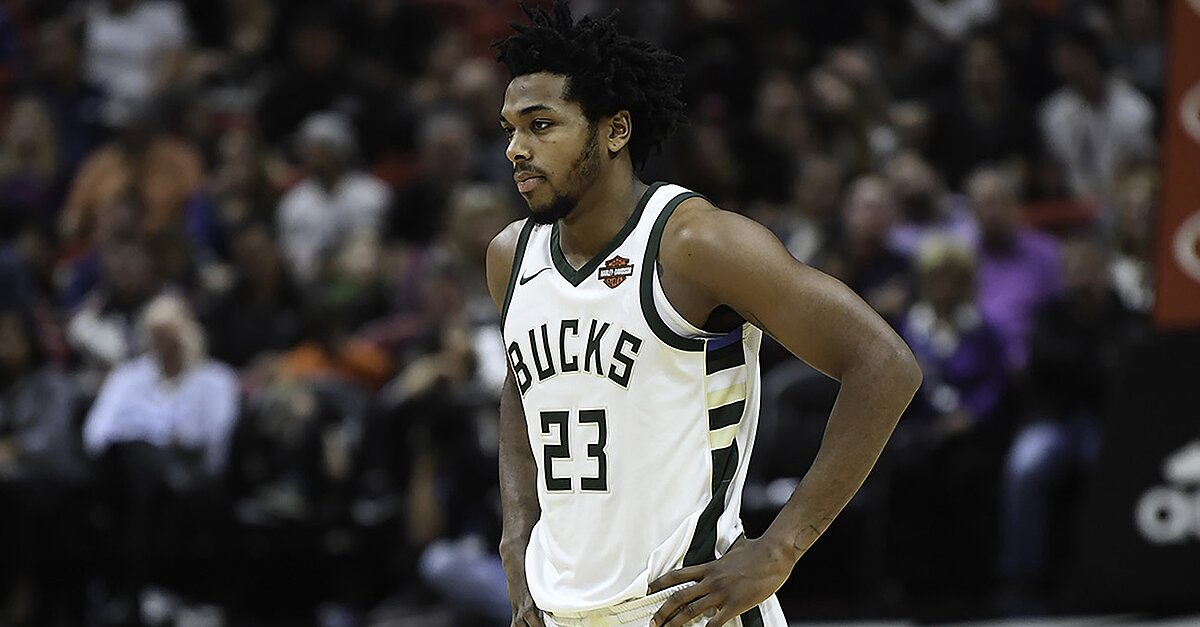 The Milwaukee Police Department on Wednesday released a video of Milwaukee Bucks rookie guard Sterling Brown being arrested in January for the misdemeanor charge of resisting or obstructing an officer. The video, taken from the body camera of one of the arresting officers, shows an unarmed Brown being tased by an officer while being taken to the ground. This incident occurred in spite of the 23-year-old former SMU star appearing non-combative on the video. Brown has signaled plans to sue the city of Milwaukee, most likely for civil rights violations and police brutality. As explained below, any lawsuit might also include claims for negligence, battery and intentional infliction of emotional distress.

Brown was arrested in a Walgreens parking lot at around 2 a.m. on Friday, Jan. 26. This particular Walgreens is located near the Bradley Center, where Brown and his teammates played their home games this past season (beginning in the fall, the Bucks will play at the new Wisconsin Entertainment and Sports Center). At that time, a police officer spotted Brown’s unoccupied car parked horizontally—and illegally—across two handicap spaces.

Shortly thereafter, the 6’6″ Brown left the Walgreens and encountered the officer near his car. Brown would later receive a $200 ticket for committing a municipal parking violation. Based on the video, it does not appear that Brown did anything wrong other than park illegally. To that end, there is no clear reason why the encounter needed to extend beyond the mere issuance of a parking ticket.

According to the police report, however, the officer “repeatedly” asked Brown, who was standing next to the officer, to take a step back and that Brown refused. Brown’s refusal, at least as depicted by the police, worsened the dynamics of the encounter. The officer reported that Brown then “became very aggressive.” At that time the officer called for backup and another officer arrived within minutes. The officer contends that Brown became argumentative when officers asked him questions, including a request to see his driver’s license, and that “Brown physically resisted officers attempts to handcuff him.”

The police report says that Brown was then “taken to the ground in a controlled manner” and that “a Taser had to be employed to get Brown in control with handcuffs.” Audio on the video reveals an officer yelling “Tase him. Tase him. Tase him!” Brown can be heard reacting in pain while receiving electric shocks.

Brown was initially taken by police to a hospital and then jailed for a few hours. He was then released without being charged. Officers reportedly reviewed the video and realized there was no probable cause to charge him with any crime. Later that night, Brown played for the Bucks in their home game against the Brooklyn Nets. Media reports indicate Brown’s face showed cuts and scratches which were consistent with injuries caused by being thrust to the ground.

Brown’s incident takes place in the context of a larger controversy in Milwaukee over relations between law enforcement and residents. There have been several controversial incidents of alleged police brutality in recent years. According to Kevin Crowe and Ashley Luthern of the Milwaukee Journal-Sentinel, “police misconduct has cost Milwaukee taxpayers at least $17.5 million in legal settlements [from 2015 to 2017], forcing the city to borrow money to make the payouts amid an ever-tightening budget.”

The fact that Brown is a professional athlete is also relevant. If this same incident involved a regular person, it would not have attracted nearly the attention it has commanded—if it would have attracted any attention at all.

Brown is aware of his relatively high-profile status and expresses a desire to make sure he uses his stature to ensure his incident is not forgotten. In a statement released by the Bucks on Wednesday, Brown notes that “situations like mine and worse happen every day in the black community.” He adds that “being a voice and a face for people who won’t be heard and don’t have the same platform as I have is a responsibility I take seriously.” Brown also references fatal incidents involving African-American men and police officers, and stresses “the common denominator in all of these situations has been racism towards the minority community, the abuse of power, and the lack of accountability for officers involved.” For their part, the Bucks are fully supporting Brown. “The abuse and intimidation that Sterling experienced at the hands of Milwaukee Police,” the Bucks assert in a statement, “was shameful and inexcusable. … Unfortunately, this isn’t an isolated case.”

Law enforcement and other public officials have offered varying kinds of comments since the incident. For instance, Mike Crivello, president of the Milwaukee Police Association (union), has defended the arresting officers. In a Facebook post days after the arrest, Crivello wrote, “To be clear, the offender was not arrested solely for illegally parking a vehicle. His actions determined the outcome!” Crivello adds that the officers were justified in questioning Brown. Crivello asserted that Brown’s car was parked in a way that suggested something was amiss and a crime was possibly in progress. “Vehicle cross-parks in front of a business… robbery get-away-vehicle, irresponsible uncaring individual, or maybe a motorist under duress; our officers investigation was absolutely appropriate!”

Other Milwaukee officials appear more critical of the officers. Milwaukee mayor Tom Barrett has told the Journal-Sentinel, “it was a disturbing video when I saw it, and I know that the police chief feels the same way … it is disconcerting to see some of the actions in that video.” For his part, Milwaukee police chief Alfonso Morales assures the public, “If there’s ever an incident where one of our members makes a mistake, unnecessarily escalating a situation, I’m going to be honest and transparent about it. In those instances where we have made mistakes and are wrong, I’m sorry.”

The release of the Brown video on Wednesday came as part of an internal investigation by the Milwaukee Police Department. It is unclear at this time whether the investigation has found the officers at fault or cleared them.

If Brown files a lawsuit, he would most likely raise several claims. At the top of the list would be an argument that he was the victim of excessive force and police brutality. Such claims would invoke Section 1983 of the Civil Rights Act of 1871, better known as the Civil Rights Act.

Among other things, the Civil Rights Act prohibits law enforcement officers from violating a citizen’s constitutionally protected civil rights. Section 1983 would empower Brown to insist that his due process protections under the Fifth and 14th Amendments to the U.S. Constitution were violated. He might also cite his Fourth Amendment protection from unreasonable searches and seizures. Brown would likely also argue the officers were racially motivated and their alleged racial animus contributed to a decision to deprive Brown of these liberties without adequate due process. Brown would also insist the officers lacked justifiable cause to detain him and exerted unnecessary and harmful force in taking him down to the ground.

Brown would stand a stronger chance at prevailing on a Section 1983 claim if he could show that the Milwaukee Police Department exhibits a continuing pattern of race discrimination and that his incident fits into that pattern. Such a point would help Brown establish that the supervisors of the officers who arrested him have been on notice of patterns of mistreatment and have failed to take effective steps to correct it. Brown’s claims would also benefit if the officers who detained him have records indicating accusations of discrimination and mistreatment.

Brown could add other claims to a lawsuit and those claims would not depend on civil rights-based arguments. Such claims would probably include negligence, battery and intentional infliction of emotional distress. A negligence claim would assert that the officers were completely unreasonable in how they interacted with Brown and that the city of Milwaukee ought to be considered liable for allowing these officers to behave in such a fashion. Battery would center on the officers’ decision to take Brown to the ground. It would portray the takedown as unwarranted and physically harmful. For its part, a claim of intentional infliction of emotional distress would focus on the depiction of the officers as engaging in outrageous conduct.

In response to a lawsuit, the police officers would likely raise some of the points mentioned above by Crivello. Namely, the officers would assert that a vehicle cross-parked in front of a business at 2 a.m. suggests that something is off and warrants further investigation. Crivello surmises such a car parked in such a way could signal a “robbery get-away-vehicle, irresponsible uncaring individual, or maybe a motorist under duress.” The officers would contend that circumstances they encountered at 2 a.m. provided them with reasonable suspicion to briefly detain and ask Brown questions and that, in response, Brown proved uncooperative.

The officers would also stress that Brown’s potential damages may not be significant. Brown apparently suffered only minor physical injuries and those injuries did not prevent him from playing 27 minutes in the Bucks game that same night. On the other hand, Brown could focus on the more considerable emotional and reputational damages he has suffered as a result of the incident. Brown could argue that he was humiliated by the arrest and that he felt degraded. He would also emphasize race played a role in how the incident played out and living through such experience was itself damaging.

It should be noted that some police departments are able to avoid or limit liability through the doctrine of “sovereign immunity.” This doctrine refers to the principle that government and public entities cannot be sued unless they grant consent. However, there are a bevy of limitations to this doctrine. Further, there is no shortage of police brutality lawsuits in Milwaukee. This signals the doctrine of sovereign immunity has not insulated the city’s police department from liability.

This matter will probably be resolved through a settlement, apology and a pledge for change

The most likely scenario is that Brown and the city of Milwaukee do not end up in a trial. This matter is far more likely to be resolved through an out-of-court settlement. But for a settlement to work for Brown, it seems clear he will want an apology. He likely will also demand a commitment from the city to adopt the kinds of reforms that would make the incident he experienced much less likely to be experienced by others.