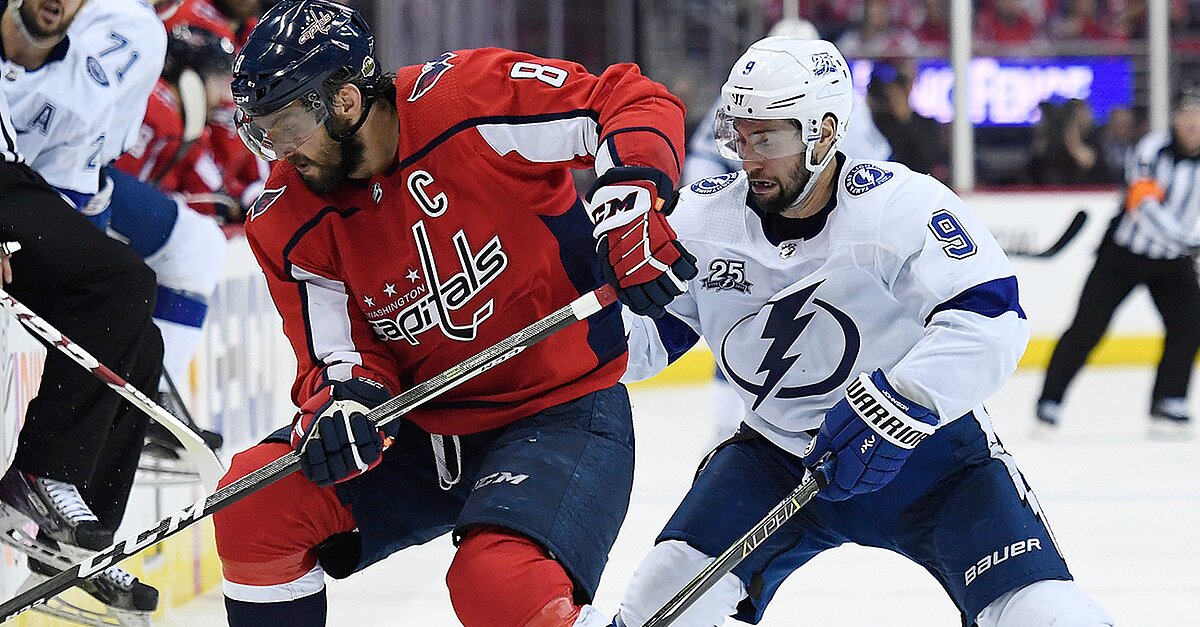 WASHINGTON – Well, this was not the way it was supposed to work out. The Washington Capitals, perennial Eastern Conference place horse, finally get past the Pittsburgh Penguins. Thereupon, having squeezed into the conference finals at last, they go down to Tampa Bay and take two in a row from the Lightning, skating loose and free without that 10,000-pound monkey-in-a-Penguin-suit off their backs. Alexander Ovechkin, in particular, looked five years younger. So they return to Washington, to a home rink steaming both literally and figuratively; the ice surface occasionally took on the consistency of an Italian Ice. With the assembled fans, hangers-on, and Beltway bagmen losing their devious little minds, the Capitals present their home fans with a world-class dud, falling behind 3-0 as the second period had barely begun, and losing, 4-2, in a game that fundamentally now has transformed the series. And, from an area a few degrees east of their shoulder blades, the Capitals hear an ominous and familiar apish screeching again.

“No one expected 4-0, right?” said Capitals center Evgeny Kuznetsov. “We all know it’s going to be a tough series. We just have to relax a little bit and stay positive. It’s still fun.”

On Tuesday night, besides failing to solve Lightning goalie Andrei Vasilevskiy, whom it chased from the net in Game One, Washington let itself down by botching what scoring opportunities it had–Ovechkin had nine shots by himself–and by concocting a suicidal combination of silly penalties and shabby penalty-killing. It started early, when Capitals goalie Braden Holtby tripped Tampa’s Yanni Gourde and, his team playing a man up, Lightning star Steven Stamkos blew a one-timer past Holtby from the left faceoff circle. It was the first time in the series that Tampa had kicked off the scoring. Also, it was only the third time in 15 games that the Capitals had fallen behind first.

For all intents and purposes, the game got away from Washington in the first three minutes of the second period. First, Nikita Kucherov scored on a power-play occasioned by a curious call on Washington’s Lars Eller for closing his hand on the puck. Only a minute and change later, Victor Hedman scored for the Lightning to push the lead to what clearly was an insurmountable 3-0.

The game essentially ended with an exchange of goals a few minutes later. For a stretch in the middle of the second period, the energy of the Capitals rose to a level appropriate to the situation. Their forechecking sharpened and they challenged every pass. Brett Connolly whistled a wrist shot past Vasilevskiy just inside the left post to cut the lead to 3-1. This was followed by a fruitless Washington power play on which Vasilevskiy stopped all three shots that he faced. With Tampa back at full strength, Brayden Point fired a shot between the legs of Capitals center Chandler Stephenson that got past Holtby and took the air out of the game for good.

“You’ve got to make them chase the game,” said Tampa coach Jon Cooper. “Maybe they play a little different. That was big for us. They get that 3-1 goal and the building is kind of hopping a little bit and they pushed. Pointer getting that fourth one kind of popped the balloon.”

The Capitals conspired deeply in their own demise. The bad penalties combined with shabby penalty-killing was bad enough but, except for that spasm in the second period, the Capitals were far too loose with the chances they had, outshooting Tampa by 15 shots but still losing by two goals. In addition, Washington had the devil’s own time trying to get the puck out of their own zone, something they’d done superbly in the two wins in Florida. Too often, they tried to clear the puck simply by throwing it down the middle of the ice, which is never an optimal method of doing that. In addition, during these playoffs the Capitals are curiously mediocre at home. They are 7-1 on the road, but 3-4 in their own building, which is extraordinarily strange. “I like playing on the road,” Kuznetsov said.

To be fair, Washington was due for a botch of this kind. They had been uncommonly cool ever since they began the playoffs by beating Columbus in six games. Dispatching Pittsburgh seemed to change the character of the team completely and the ease with which they won the first two games of this series, outscoring Tampa 10-4, came as something of a surprise to everyone, not least to the Lightning themselves. For the moment, however, the Lightning have reasserted their defensive persona and the Capitals know it.

“They’re just working the chances that they had and we didn’t,” said Kuznetsov, who had a whopping 12 shots on goal himself. “The power-play meant everything. They scored and we didn’t. We had so many good looks and we just did not score.”

But nobody is more central to the series than Ovechkin, who had nine shots without scoring on Tuesday night. He had carried more of the burden of his team’s playoff stumbles than did anyone else. He heard endlessly about the years in which he put up dazzling regular seasons only to have his team falter in the postseason. Because of Washington’s inability to get past Pittsburgh, he found himself playing the role of Wilt Chamberlain to Sidney Crosby’s Bill Russell. For two years in a row, Washington put up the league’s best record and then lost in the playoffs to Pittsburgh. Ovechkin felt history turning to stone all around him. Nobody looked more relieved when Kuznetsov scored to eliminate the Penguins than Ovechkin did.

Now, with various Penguins off to various golf courses, more than anyone else, Ovechkin seems more unburdened than any of his teammates. Even his opponents have noticed. After the second game in Tampa, Lightning coach Cooper told NHL.com, “I think he’s taking [13] years of frustration out on one playoff season. He’s taking it out on that. There’s a reason he has 600 goals and he’s done all of these wonderful things in the league. In the past, he’s not had playoff success and when you do get to taste a little bit of it, it really tastes good.” Ovechkin put up a goal and an assist in both games in Tampa, and he was the heart of the brief flurry in which the Capitals almost got back in Tuesday night’s game and, after it was over, he was quite sanguine about the series going forward.

“We had pretty good chances to score and maybe make it 3-2, and then they score on the next shift, you know,” Ovechkin said. “Nobody said it was going to be easy. I don’t think they were more desperate. They just scored more power-play goals. Five-on-five was even. It’s OK. We lose and we move forward. We believe in each other and we know what we are going to have to do. We just have to play more desperate. I think as soon as they got the lead, we tried, maybe, a rash play, make some plays through the neutral zone. We can control it. It’s still in our hands.”

There is nothing sillier in sports than judging excellence by jewelry, than defining a brilliant career solely by the number of championships won. Alex Ovechkin has scored more than 600 goals in 13 years. That is an astounding record. Without question, when it comes simply to shooting the puck, Ovechkin is the transcendent player of his era. He sees angles that nobody else does. He sees openings invisible to everyone else on the ice. To give more weight to his lack of a Stanley Cup championship than to what he does, every night, on the ice, is to judge art with the heart of an accountant. And this is a town that does far too much of that, every day, as a matter of business as usual. Washington can use a little art for art’s sake, if you ask me.