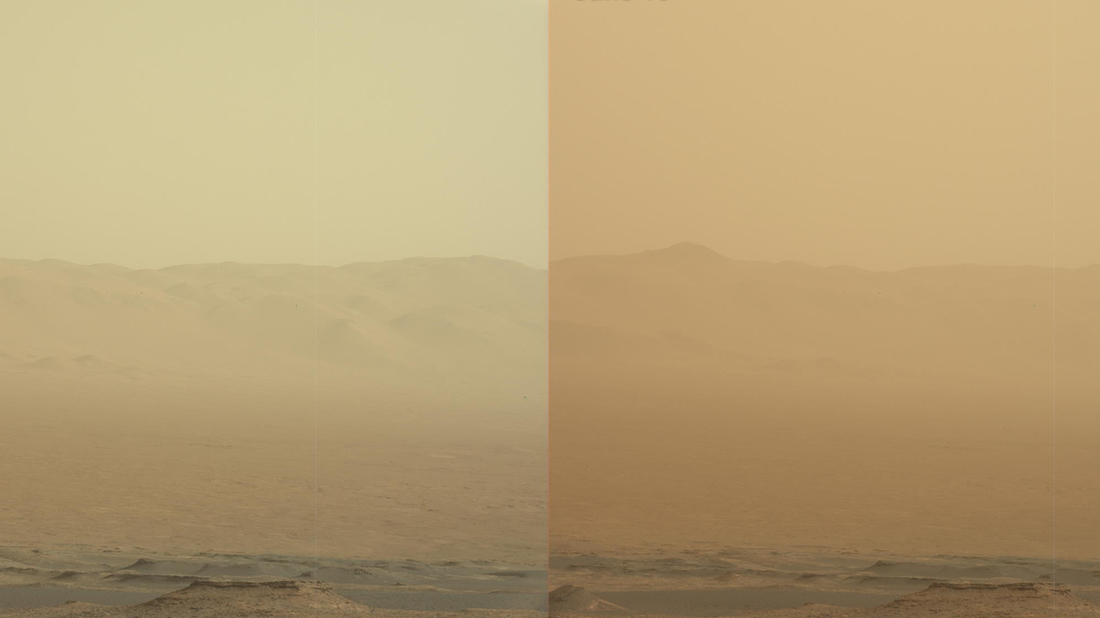 These two views from NASA’s Curiosity rover, acquired specifically to measure the amount of dust inside Gale Crater, show that dust has increased over three days from a major Martian dust storm. The left-hand image shows a view of the east-northeast rim of Gale Crater on June 7, 2018 (Sol 2074); the right-hand image shows a view of the same feature on June 10, 2018 (Sol 2077). NASA/JPL-Caltech/MSSS hide caption 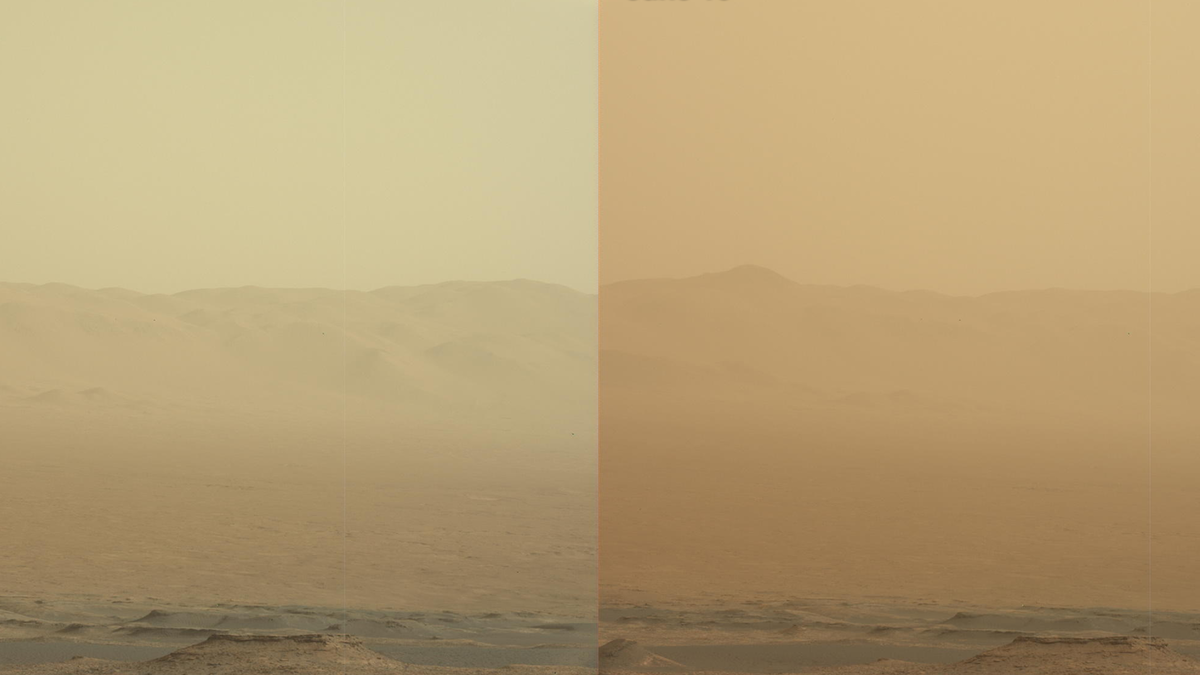 These two views from NASA’s Curiosity rover, acquired specifically to measure the amount of dust inside Gale Crater, show that dust has increased over three days from a major Martian dust storm. The left-hand image shows a view of the east-northeast rim of Gale Crater on June 7, 2018 (Sol 2074); the right-hand image shows a view of the same feature on June 10, 2018 (Sol 2077).

A massive dust storm on Mars is threatening NASA’s Opportunity rover, which has been conducting research on the Red Planet for well over a decade.

Where the rover sits, the dust storm has completely blotted out the sun, depriving Opportunity of solar power and cutting off communications with Earth.

NASA scientists believe the rover has fallen asleep to wait out the storm, and that when the dust storm dies down and sunlight returns, the rover will resume activity.

“We’re concerned, but we’re hopeful that the storm will clear and the rover will begin to communicate with us,” says John Callas, the Opportunity project manager.

The rover has survived dust storms before, but it’s never lost power this thoroughly.

The dust storm on Mars grew from a small, local storm into a massive event over the course of the last two weeks. Opportunity is located near the middle of the storm, while the newer rover Curiosity — which is nuclear-powered, so not threatened by the loss of sunlight — is currently near the storm’s edge.

Last week, scientists who watched as the dust storm grew more and more intense responded by reducing Opportunity’s activity levels, to save power generated by the rover’s solar panels. But they kept checking in on a regular basis.

“We do want to maintain some level of activity on the rover, because that’s what keeps the rover warm,” says John Callas, the Opportunity project manager. “So [we were] trying to not only manage power consumption but manage the temperatures on the rover.”

But eventually the storm became so intense that keeping even minimal activity was no longer possible. Opportunity stopped communicating with Earth altogether, presumably as a result of a low-power fault.

“Our expectation at this point is that the rover has gone to sleep in low energy mode,” Callas says.

“The storm is one of the most intense ever observed on the Red Planet,” NASA says. “As of June 10, it covered more than 15.8 million square miles (41 million square kilometers) — about the area of North America and Russia combined.

“It has blocked out so much sunlight, it has effectively turned day into night for Opportunity, which is located near the center of the storm, inside Mars’ Perseverance Valley,” NASA says. 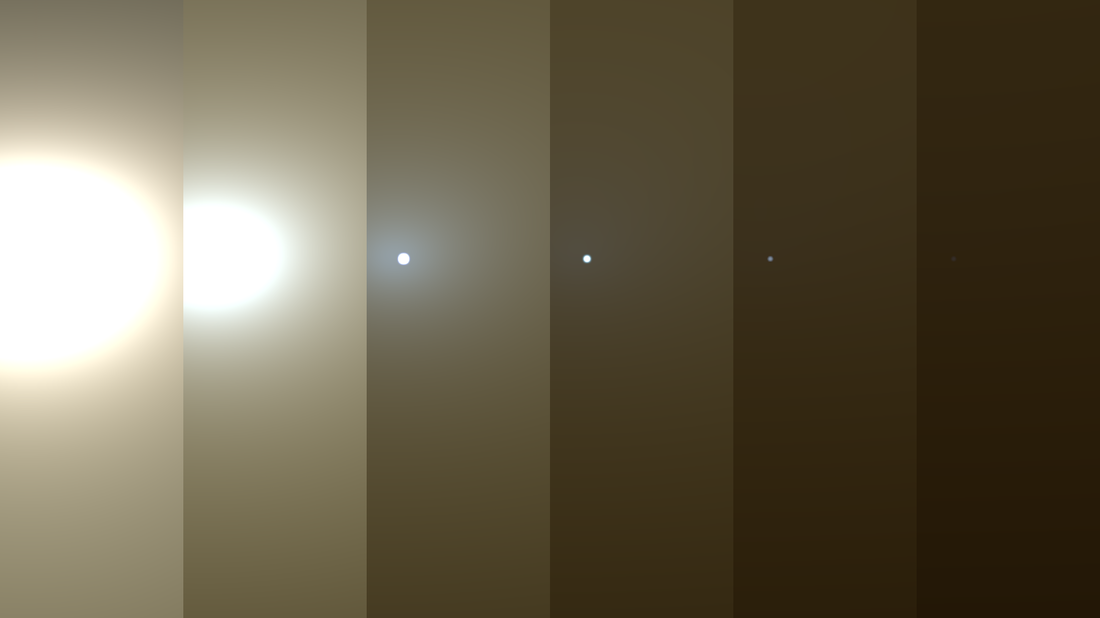 A series of images shows simulated views of a darkening Martian sky blotting out the Sun from NASA’s Opportunity rover’s point of view, with the right side simulating Opportunity’s current view in the global dust storm (June 2018). NASA/JPL-Caltech/TAMU hide caption 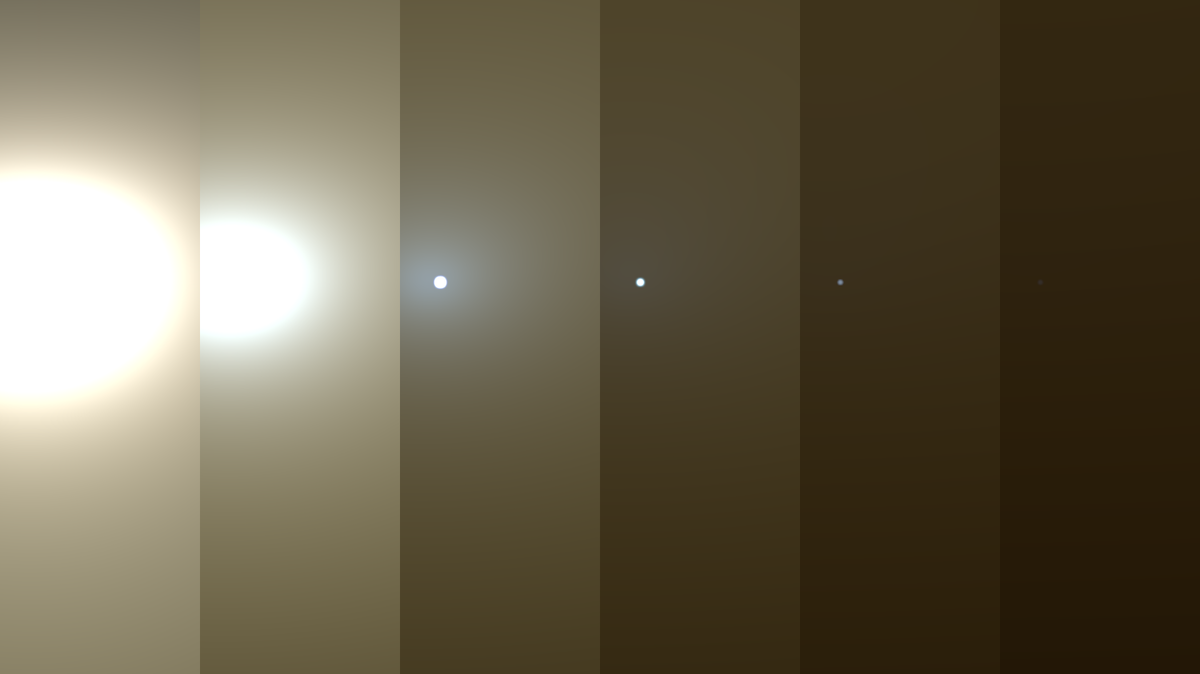 A series of images shows simulated views of a darkening Martian sky blotting out the Sun from NASA’s Opportunity rover’s point of view, with the right side simulating Opportunity’s current view in the global dust storm (June 2018).

With no news from Opportunity, the question is whether the little rover that could will make it out of the storm still kicking.

There’s no expectation that the rover will be buried by dust, but there are risks associated with the lack of temperature control and the extended lack of power.

“The good news there is that the dust storm has warmed temperatures on Mars,” Callas says. “We’re also going into the summer season so the rover will not get as cold as it would normally.”

The rover also has small, plutonium-powered heater units on board that will help keep it from freezing, and NASA scientists believe the rover will be able to ride out the storm until the skies clear. It’s not clear how long that will take.

At that point, when the sun returns, the rover should be able to generate more power, recharge its batteries and start back up.

There is a possibility that the rover might lose so much power that it can’t maintain its internal clock, which would make recovery more difficult, but still possible.

Scientists who work with the rover get emotionally attached, Callas says.

“The analogy I would use right now is it’s like you have a loved one in a coma in the hospital. The doctors are telling you that you’ve just got to give it time and she’ll wake up, all the vital signs are good, so it’s just waiting it out — but you know, if it’s your 97-year-old grandmother you’re going to be very concerned. And we are.

“By no means are we out of the woods here,” he says.

The Mars Opportunity rover has been on the Red Planet for well over a decade — it landed in 2004.

As NPR has reported, the rover has had problems with its memory banks for several years. It also has one arthritic arm (NASA’s term, not ours) and has lost some of its steering capacity.

But while the batteries onboard are aging, they’re still functioning well, NASA scientists say.

“We’re all pulling for Opportunity,” says Jim Watzin, the director of NASA’s Mars Exploration Program. “As you know, it’s been a remarkably resilient rover, lasting 15 years — well beyond its original design life of just 90 days.

“Its longevity has taught us much about operating on the surface of Mars. But regardless of how this turns out, this little rover has proven to be an invaluable investment that has greatly increased our ability to explore the Red Planet.”

Scientists say that while the storm threatens the rover Opportunity, it is an opportunity itself — a chance to learn more about dust storms on Mars.

That’s helpful both for understanding the storms in general, and also for preparing for human trips to Mars.