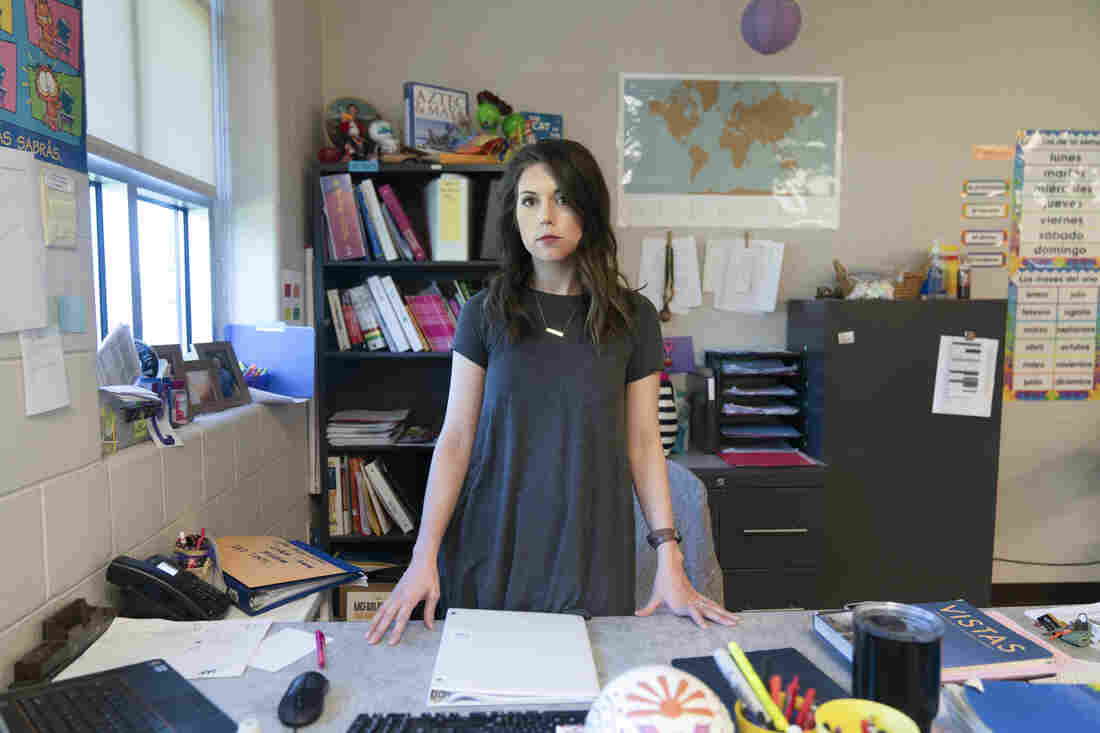 Kaitlyn McCollum teaches at Columbia Central High School in Tennessee. After being told her TEACH grant paperwork was late, her grants were converted to loans. “I’m on the phone in between classes … trying to get all of this information together, crying, trying to plead my case,” she says. Stacy Kranitz for NPR hide caption 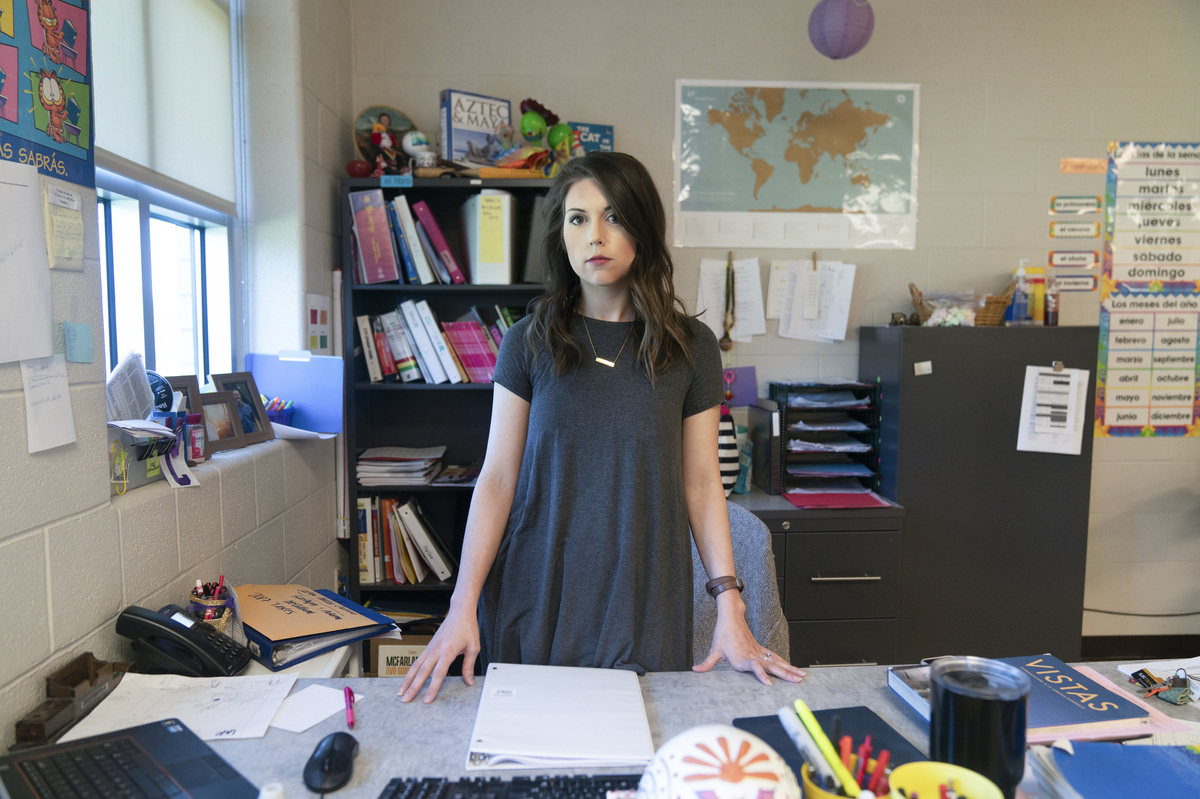 Kaitlyn McCollum teaches at Columbia Central High School in Tennessee. After being told her TEACH grant paperwork was late, her grants were converted to loans. “I’m on the phone in between classes … trying to get all of this information together, crying, trying to plead my case,” she says.

It’s a financial nightmare for public school teachers around the country: Federal grants they received to work in low-income schools were converted to thousands of dollars in loans that they now must pay back.

NPR revealed these problems in a series of recent stories. The Department of Education now tells NPR it has launched a new, “top-to-bottom” internal review of all aspects of the TEACH grant program. Officials say the review is aimed at fixing the issues and that the department is “absolutely committed to improving” the program.

“It’s ridiculous, it’s mind-boggling,” says Kaitlyn McCollum, a high school teacher in Columbia, Tenn., who is among potentially thousands of teachers who met the teaching requirements for these grants but nevertheless were saddled with debt for money they never borrowed. “It’s been two years of torture.”

This is how the grant program works: It gives teachers money to pay for an undergraduate or a master’s degree. In exchange, they agree to teach a high-need subject, such as math, for four years in a school that serves lots of low-income families.

It sounds simple enough. The teachers need to send in paperwork every year, certifying that they’re keeping those promises. But too often, a little mistake — such as a missing signature or sending in documents even a couple of days late — can lead to their grants getting converted to loans with interest. So, what was free money suddenly becomes a major debt and financial burden.

After NPR aired stories about the problem, emails and social media messages poured in from dozens of teachers saying this had also happened to them.

McCollum, the teacher from Tennessee, received $16,000 in TEACH grants. And every year, she says, she sent in the paperwork on time documenting that she’s been teaching in a low-income school as she promised. But the fourth year, she says, the company that manages the program, FedLoan, told her it got her paperwork late.

Suddenly, her grants were converted to $22,000 in loans (including interest, which keeps adding up). By the time she’s done paying the government back, it will have cost her $30,000. 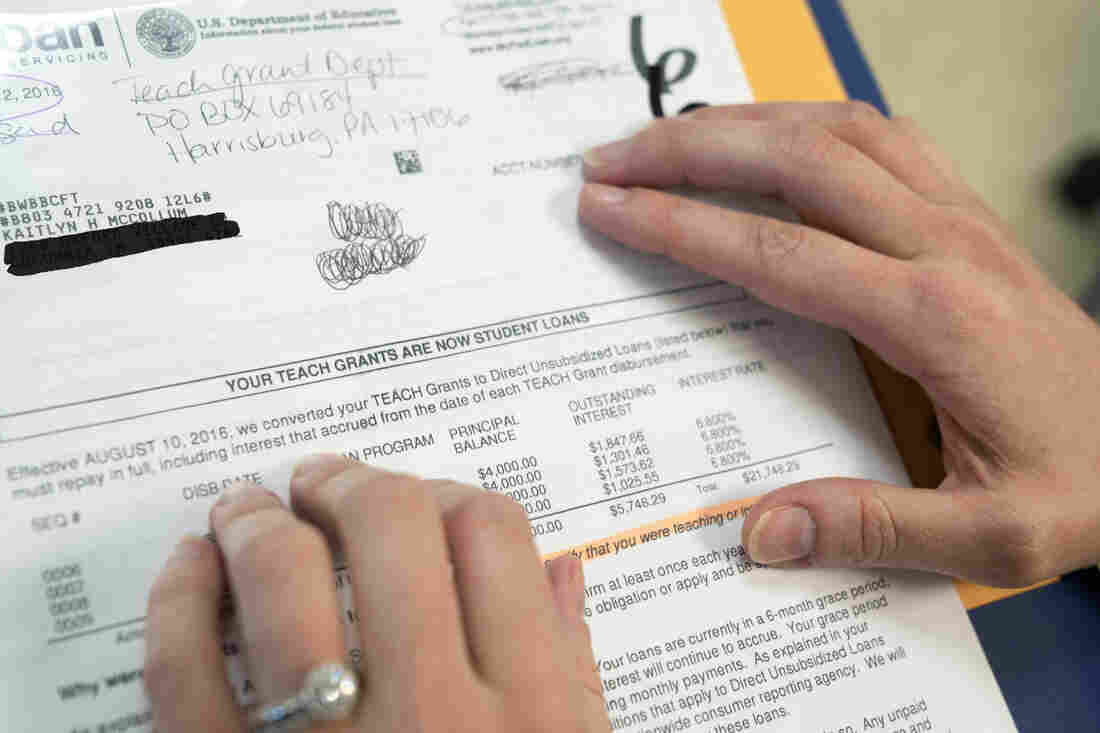 McCollum points to documents that indicate a mishap that turned her $16,000 in federal grants into loans that will cost her $30,000 to pay back with interest. Stacy Kranitz for NPR hide caption

“I remember going out to the mailbox, I even opened it up at the mailbox and sheer panic just set in,” she says. McCollum and her husband had just found out she was pregnant with their first child. Money was already tight.

So McCollum, like many teachers, appealed to the loan servicing firm FedLoan, which manages the program for the Education Department, saying she had met the terms of the TEACH grant. But the company denied her appeal, saying it could not convert her loans back to grants. 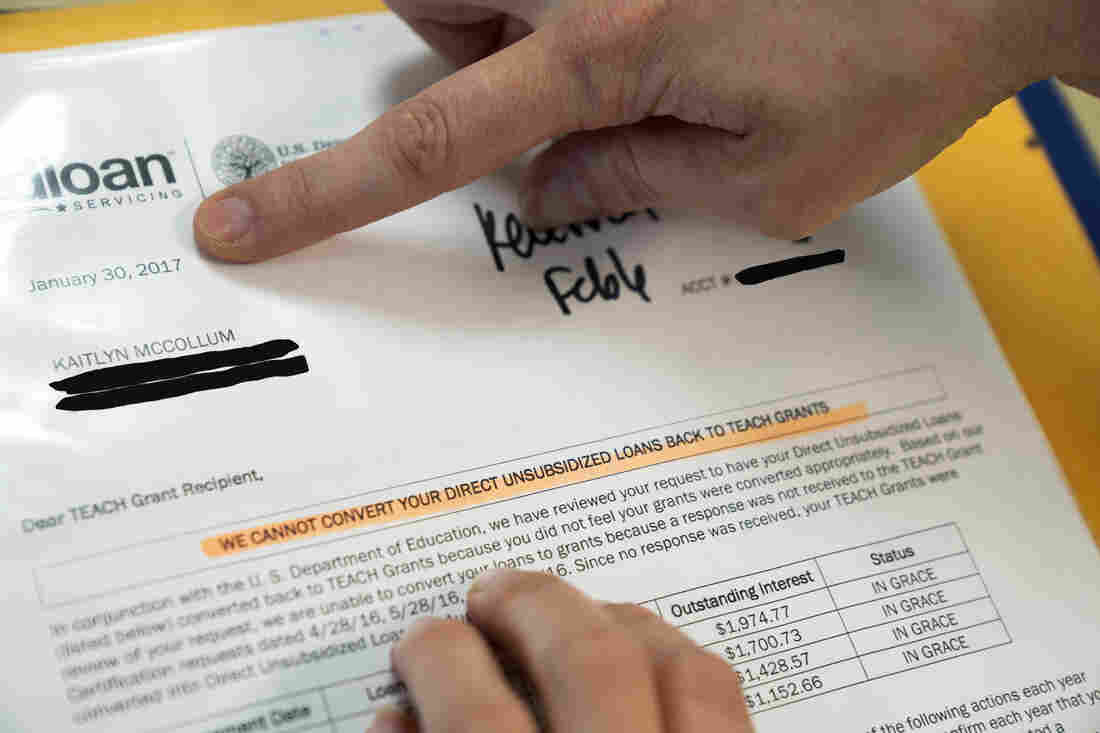 McCollum points to a FedLoan document denying her appeal to get her loans converted back to grants. Many teachers tell NPR they were told they had no recourse despite the fact that they have been meeting the teaching requirements of the TEACH grant program. Stacy Kranitz for NPR hide caption

“It’s just such a hopeless conversation because I’m on the phone in between classes pretty much trying to get all of this information together, crying, trying to plead my case,” McCollum says. But the answer was always, “No, no, no — I would just get shut down time and time again.”

McCollum sent in documents showing she was meeting the program’s teaching requirements. She also sent FedLoan a signed letter from her school principal confirming that they had completed her TEACH grant’s annual certification paperwork ahead of the deadline and that McCollum had tried to fax the paperwork from the school office. FedLoan declined to be interviewed for this story but in the past has told NPR the company is committed to resolving borrower issues.

McCollum says she also mailed the certification paperwork ahead of the deadline. And even if it did arrive a couple of days late, she and other teachers in the same situation are horrified to find out that just missing a paperwork deadline should have such a catastrophic result. 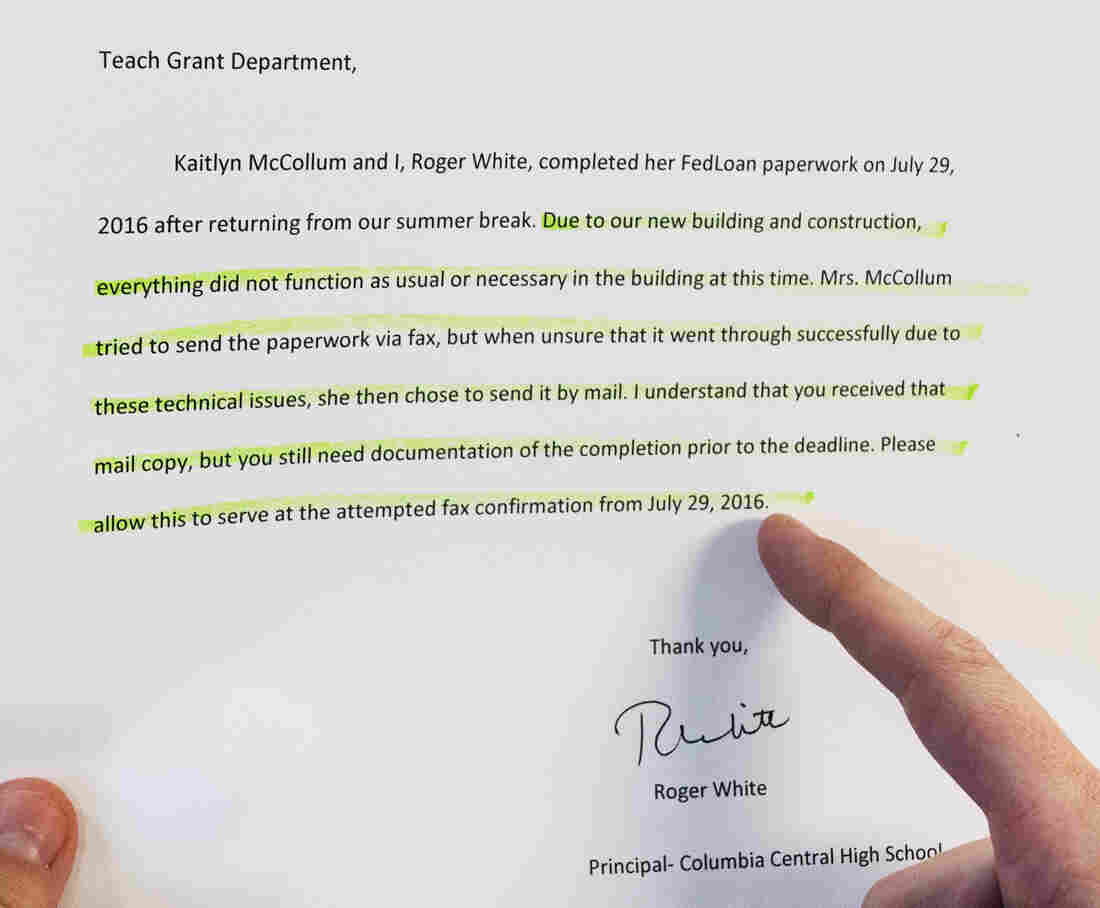 McCollum points to a letter written by her principal in her defense. Stacy Kranitz for NPR hide caption

After two years of fighting, McCollum says she’d given up hope. And many teachers who reached out to NPR said the same.

But it may not be hopeless after all, especially if the Department of Education acts to fix the issues after its review.

But teachers like McCollum will have to be patient. Department officials say the review will take time. And while it’s underway, it’s still unclear if teachers who’ve been hurt by the program will get their money back. The department says it may be limited in what it can do by the rules Congress wrote for the program.

Legal experts outside of the department say they believe it does have the power to fix the program and make things right for teachers.

Julie Miceli worked as a deputy general counsel at the Education Department until 2014. She says fixing problems like this was her job.

So we asked her, could the department make this right — could it go back and review whether teach grants like McCollum’s should have been converted, and, if not, fix it, and give some teachers their money back?

“I think they can. I don’t think there’s anything in the statute that relies on complying with a paperwork deadline,” Miceli says. 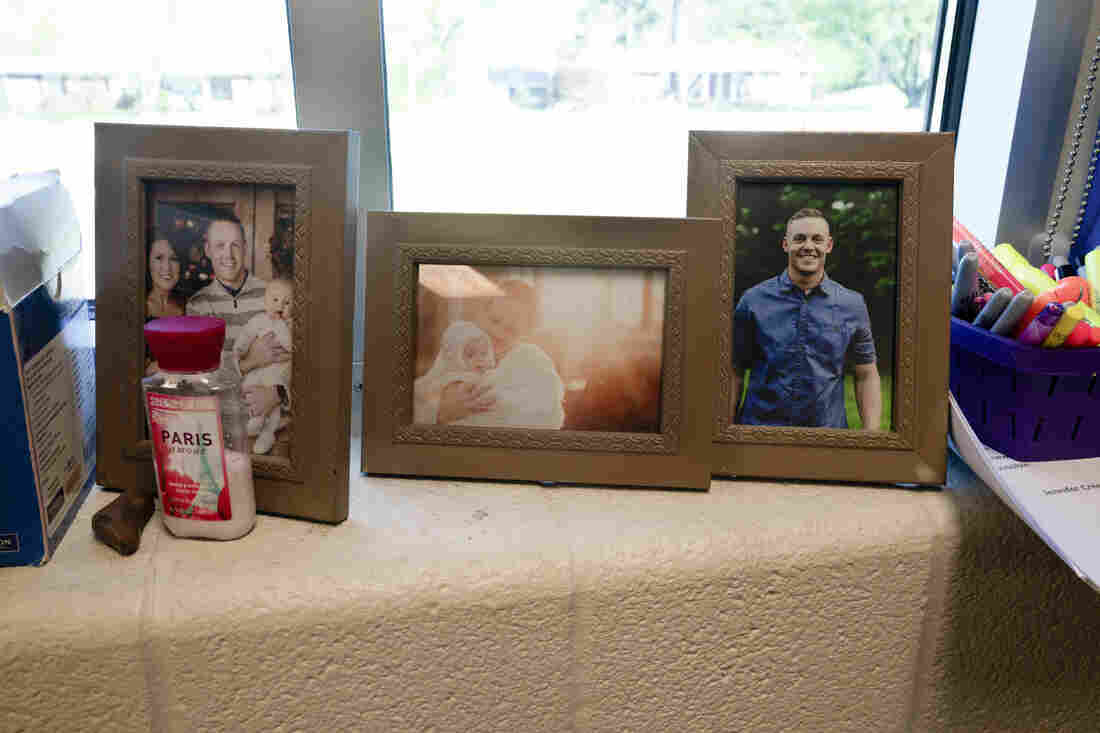 Photos of McCollum’s family sit on the windowsill of her classroom. Stacy Kranitz for NPR hide caption 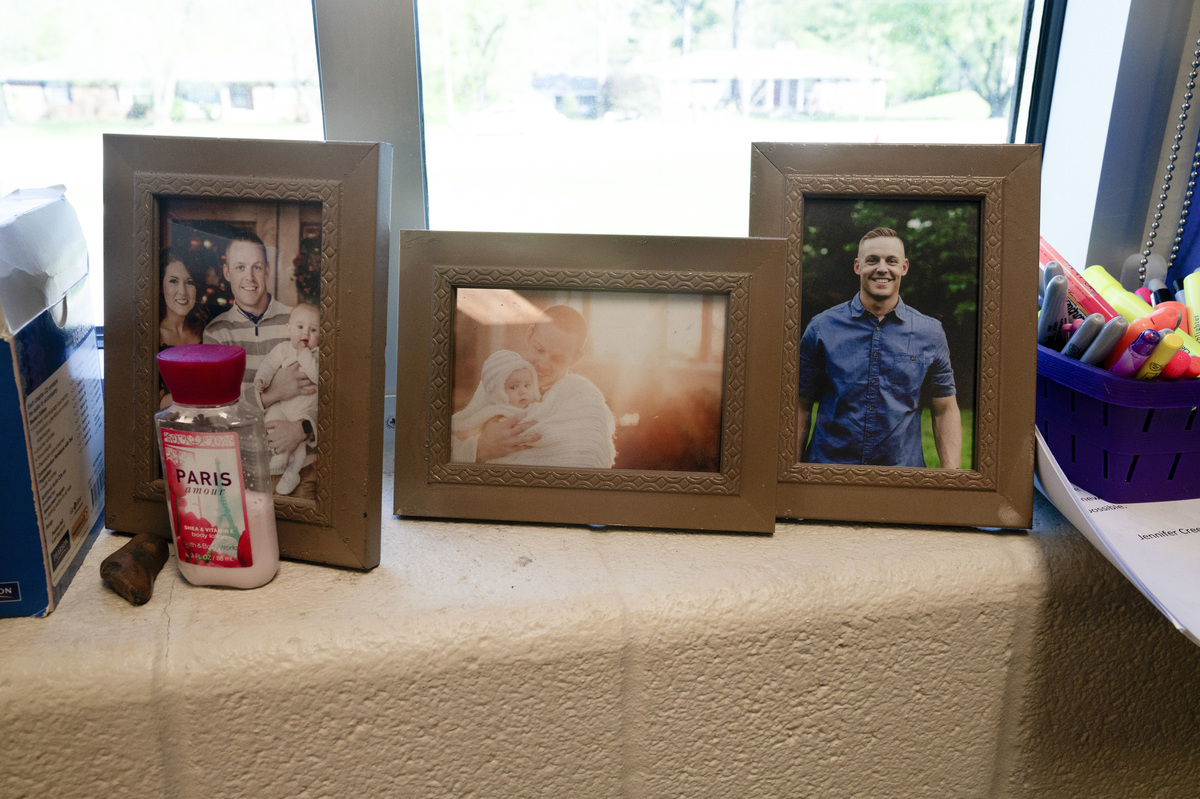 Photos of McCollum’s family sit on the windowsill of her classroom.

This is a key point. Miceli says it seems FedLoan has been strictly enforcing paperwork rules, which the department has the authority and flexibility to revisit.

Being so strict about paperwork, where even a minor paperwork error can have such a drastic outcome, she says, goes against the spirit of the TEACH grant.

“It’s not a fine, it’s not a fee,” Miceli says, like a late payment on a credit card or tax bill. “It’s a complete conversion from a grant to a loan. And I don’t believe that was the intent where you’ve got a borrower who’s actually meeting the terms of the program.”

Other legal experts agree. But Miceli stresses that she still has friends and former colleagues in the department, and says they’re good people who care about education and no one there is trying to hurt these teachers.

Meanwhile, Sen. Mark Warner, a Virginia Democrat, has introduced bipartisan legislation to reform the TEACH grant and other student loan programs. He too says these teachers should get their grants back if they’re meeting the requirements.

As the Education Department is figuring out what it’s going to do next — it says that teachers who believe they’ve had their grants unfairly converted to loans should appeal first through FedLoan, and then if necessary, through the department’s Federal Student Aid Ombudsman’s office.

McCollum recently did that. And she’s now waiting, hoping better news arrives in her mailbox soon.

Editor’s Note: Photos of documents on this page have been altered to obscure Kaitlyn McCollum’s private information.