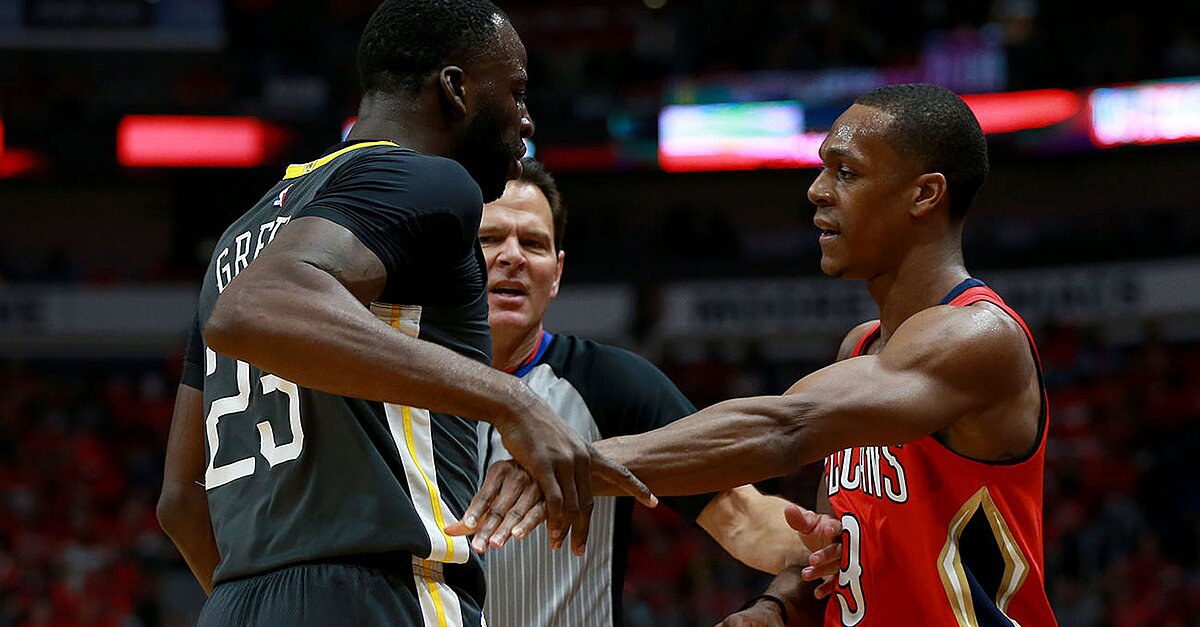 Draymond Green and Rajon Rondo were at it again, pushing and shoving each other after the whistle, but neither of them wanted to take the blame.

The Pelicans defeated the Warriors 119-100 in Game 3 at the Smoothie King Center on Friday, protecting their home court thanks to 33 points and 18 rebounds from Anthony Davis. After two strong Golden State wins to open the series, New Orleans pushed back hard, racing out to a 30-point first quarter and eventually forcing Steve Kerr to wave the white flag midway through the fourth.

Roughly five minutes into a choppy opening, Green approached Rondo as the Pelicans guard signaled for a timeout. As the other eight players headed to their respective benches, Green played defense on Rondo and then knocked the ball away as Rondo attempted to pass it to the official. Rondo pushed Green in the chest, Green pushed back and eventually two officials stepped in between them.

Somewhat surprisingly, the exchange didn’t produce double technical fouls. Green and Rondo also went chest to chest before halftime of Game 2 at Oracle Arena earlier this week, with Rondo later taking the unusual step of wiping his sweat on the basketball before Green attempted a free throw.

Following Game 3, both Green and Rondo suggested the other was to blame for their repeated confrontations, with the former deploying the third-person to state his case.

“When have I went up to [Rondo] and tried to bait him? Y’all hate the storyline that somebody is trying to bait me,” Green said. ”At some point, somebody has to tell the truth. It ain’t Draymond this time. I’ve baited a lot of guys. I’ve tried to bait a lot of guys. Succeeded quite a bit, sometimes failed. … Draymond not trying to bait nobody. I’m chilling. Playing basketball.”

Rondo, who finished with four points and a game-high 21 assists, volleyed the accusation right back.

“That’s his game,” Rondo said of Green. “I don’t try to bait him into anything. He talks a lot of shhhh. It’s just part of it. We’re competing. I don’t think there’s nothing more than we’re battling on the court. He’s a great competitor and I love competing against him. Just trying to match his intensity.”

Green nearly finished with a triple double in the loss—posting 11 points, 12 rebounds and nine assists—but he committed seven turnovers and was a minus-25 in 36 minutes. Golden State endured an off night all around, failing to match New Orleans’ pace and shooting. Stephen Curry, who played well in Game 2 after returning from a knee injury, tallied 19 points on just 6-19 shooting.

The obvious silver lining, from Golden State’s standpoint, is that Green has managed to avoid accumulating a single technical foul or flagrant foul during the Warriors’ first eight playoff games. During the postseason, players are subject to a suspension if they accrue seven technical fouls or receive three flagrant foul points (one for a Flagrant Foul 1, two for a Flagrant Foul 2).

Green’s temper and intensity are always under the microscope. He was famously suspended for Game 5 of the 2016 Finals after committing multiple flagrant fouls, and this season he finished second in the league in both technical fouls (15) and ejections (3).

Nevertheless, the four-time All-Star assured reporters that he wouldn’t be suckered into an incident that could potentially keep him off the court during the playoffs.

“[I’m] just playing basketball,” Green said. “I’m not an idiot, that’s for sure. I see what they’re trying to accomplish a mile away. I’m just not dumb, that’s about it.”

Game 4 is set for Sunday in New Orleans.