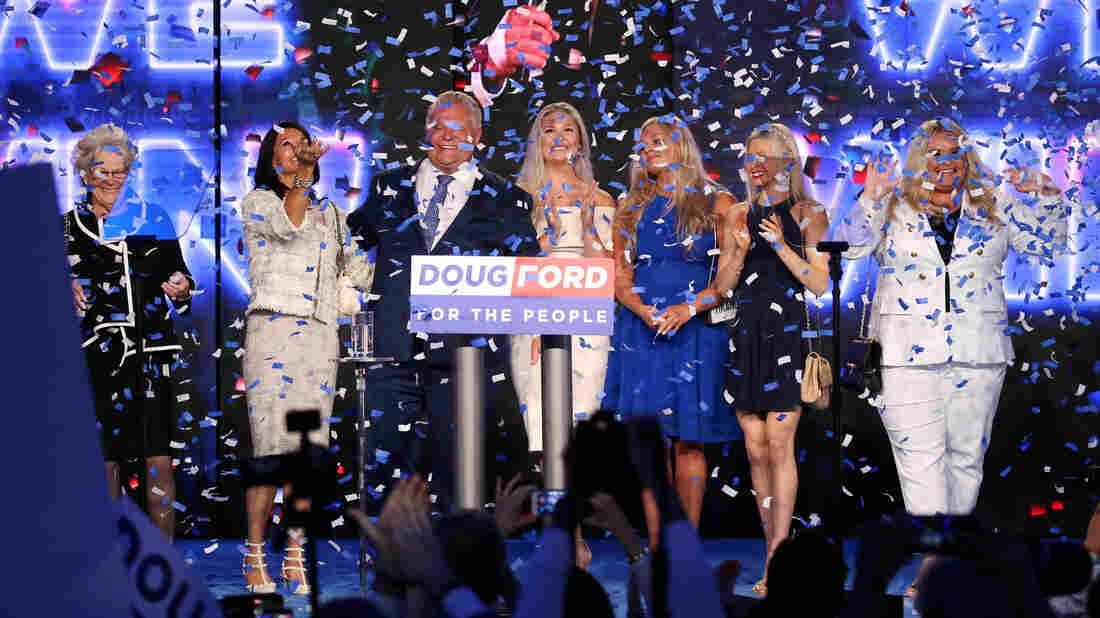 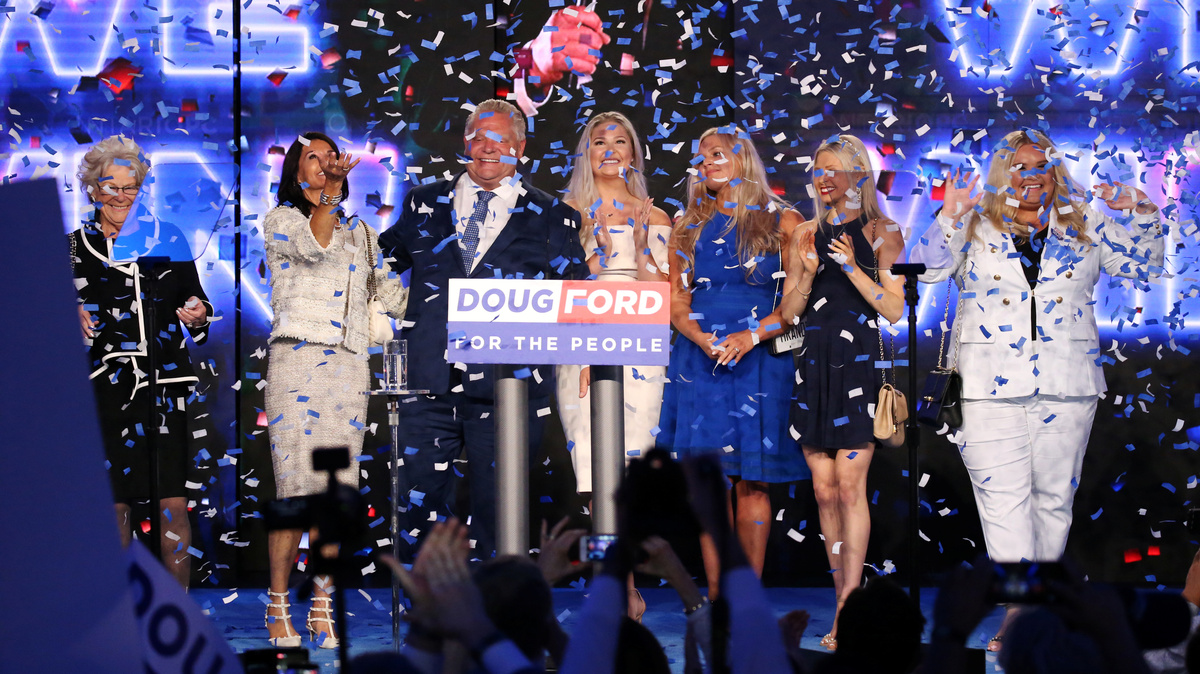 Progressive Conservative (PC) leader Doug Ford and his family celebrate during his election night party on Thursday following the provincial election in Toronto.

Doug Ford, the brother of the late controversial mayor of Toronto, Rob Ford, has been elected premier of Ontario, Canada’s most populous province.

His center-right Progressive Conservative Party of Ontario won the election Thursday night from the Liberal Party of Canada with 41 percent of the vote, taking 76 of 124 seats in the province, according to local media. “A new day has dawned in Ontario — a day of opportunity, a day of prosperity and a day of growth,” Ford told a jubilant crowd cheering his victory.

The election is a surprising upset for the Liberal Party; 53-year-old Ford is a political rookie, having assumed leadership of the Progressive Conservative party just three months ago. A former businessman, Ford ran a populist campaign with promises to alleviate voters’ economic anxiety. He’ll lead a province that is home to nearly a third of Canada’s total population of 36 million people, and the country’s manufacturing and financial sectors. “This victory belongs to the people,” Ford said to supporters after his win, “Together we made history. We have taken back Ontario. We have delivered a government that is for the people.”

During the campaign, Ford attacked Canada’s elites and the media, saying they drink “champagne with their pinkies in the air.” He said he supported President Trump’s policies, and promised to stand up “for the little guy.” Many of Ford’s campaign promises aimed to make life in Ontario more affordable — slashing income taxes and gasoline prices, while vowing to increase spending on health care and public transit. Ford also supported doing away with the Liberal Party’s sex-ed curriculum, safe injection sites and protest-free zones outside of abortion clinics. 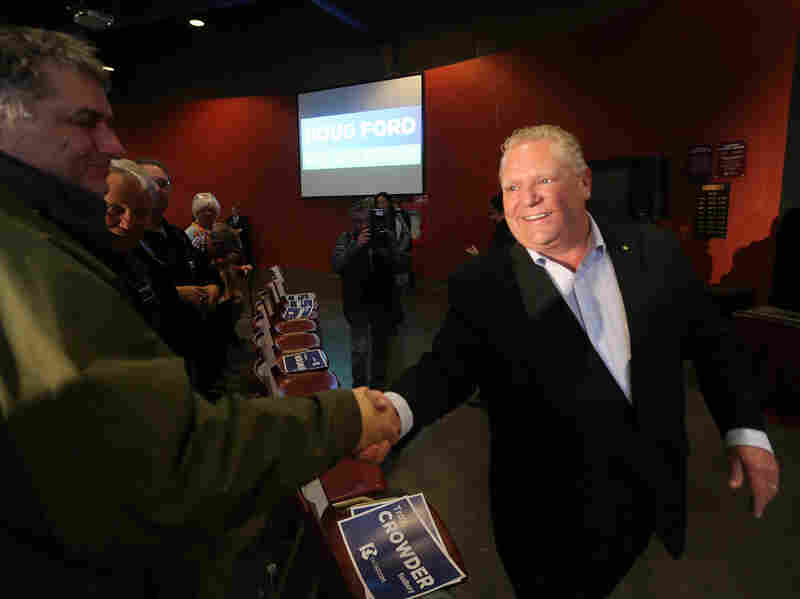 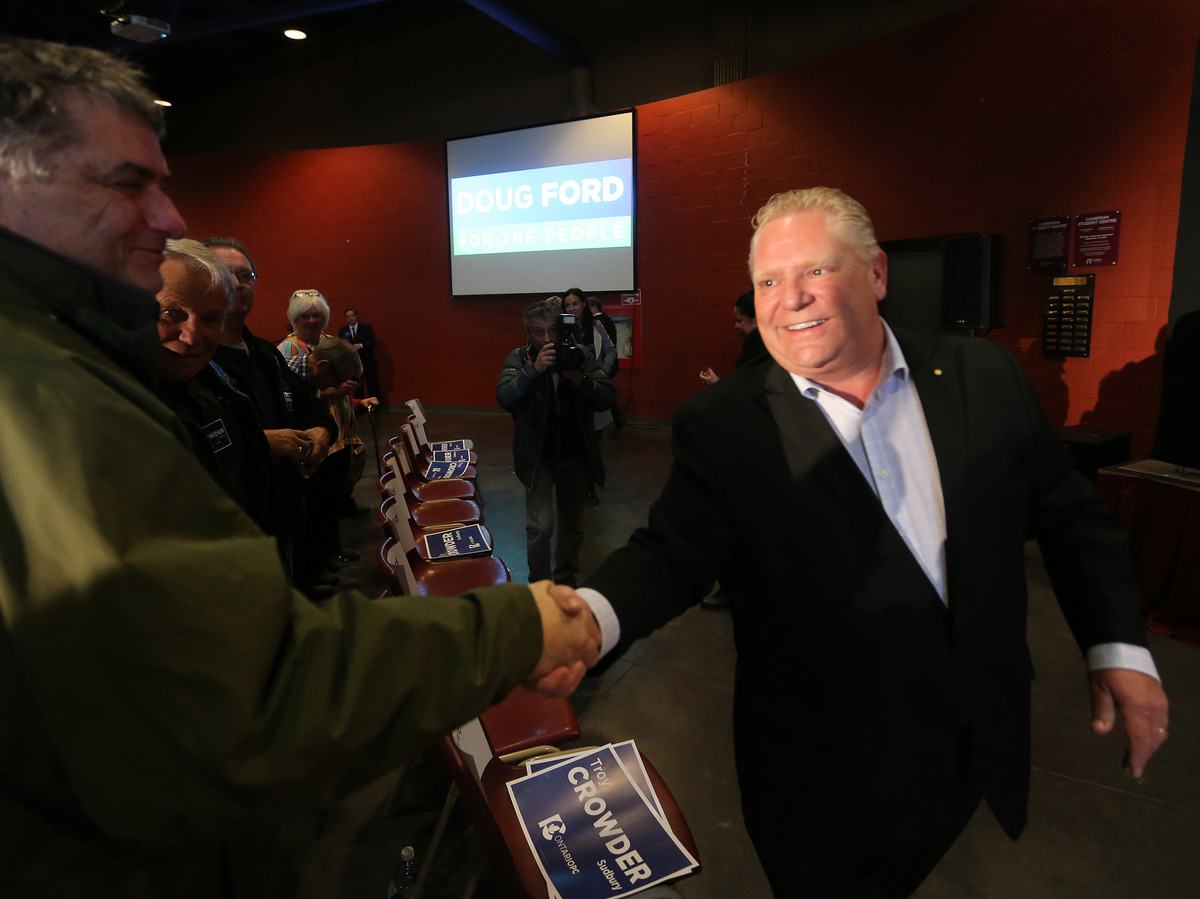 Ford’s election comes two years after the passing of his brother, Rob Ford, who served as mayor of Toronto from 2010 to 2014. “I know my brother Rob is looking down from heaven. I’m just getting chills talking about him right now,” Ford said during his victory speech, “I know Rob is celebrating with us tonight. We owe so much to Rob’s legacy.”

Rob Ford’s term as mayor was plagued with scandals, and erratic behavior that culminated with his admission that he had smoked crack cocaine. He had won the mayoral election with a core of support in suburban Toronto, called “Ford Nation.” Ford passed away from a rare form of cancer in 2016.

Just days before his brother’s election, Rob Ford’s widow Renata filed a $12.3 million lawsuit against Doug Ford, accusing him of mismanaging the family business, and her late husband’s estate. Ford has denied the allegations, which have not been tested in court.

Ford’s election swept aside the Liberal Party, which had been in charge for nearly 15 years. The Guardian reports that the Liberal Party may have lost support by trying to change too much, too quickly:

Some of the deep clamour for change emerged simply from the fact that the Liberals had governed for 15 years – a lengthy stretch for any political party,” said Cristine de Clercy, a political science professor at Western University in southern Ontario. But the dizzying pace of initiatives rolled out by Wynne’s government might have also played a role, said de Clercy, citing a rise in the minimum wage and reforms in workplace legislation and education. “She asked Ontarians to embrace many initiatives very quickly and I think certainly in some sectors people pushed back.

Kathleen Wynne, the leader of the Ontario Liberal Party and the first openly gay premier in Canada, will step down from her post. “There is another generation, and I am passing the torch to that generation,” she said. The New Democratic Party, led by Andrea Horwath, won 34 percent of the vote, and will now form the official opposition in Ontario.