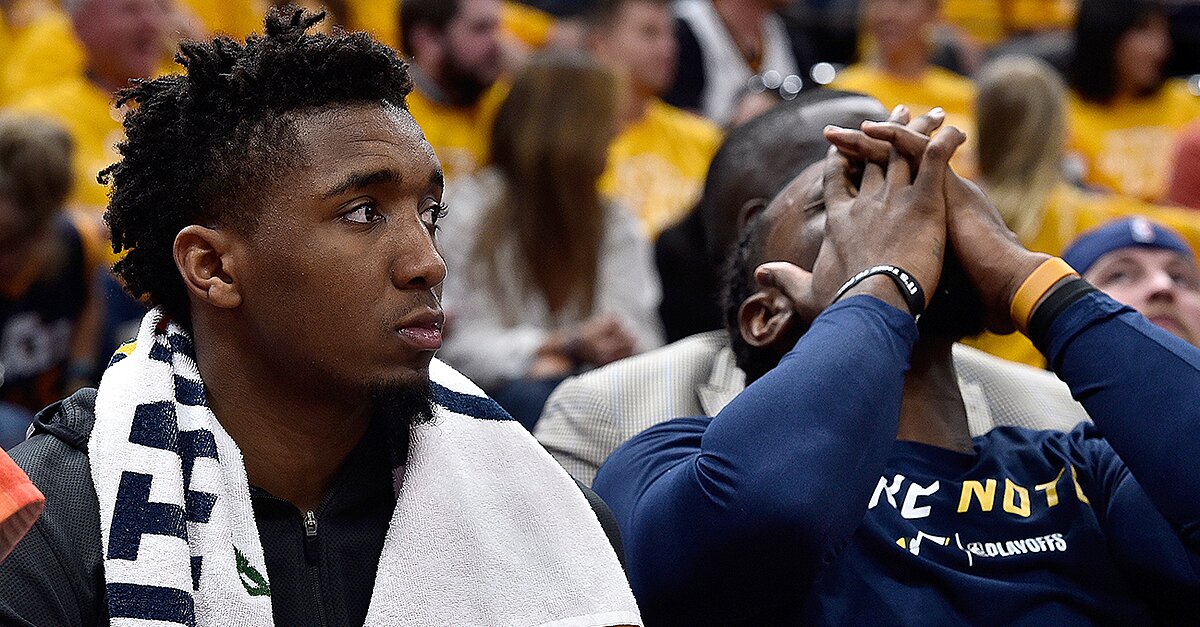 As it turns out, Donovan Mitchell punishes himself just like he punishes the rim.

Utah’s dynamic rookie guard suffered through his first dud of the playoffs on Friday, scoring just 10 points on 4-16 shooting in an unsightly 113-92 loss to Houston. The Game 3 loss produced a stunning swing in momentum after Utah evened the second-round series with a Game 2 win. Back in front of their home crowd, the Jazz dug a huge hole early, giving up 39 points in the first quarter, and never mounted much of a comeback.

Mitchell, who dropped jaws with a sensational put-back dunk in Game 2, was out of sync all night. His point total was his lowest output since the All-Star break and his minus-31 in 31 minutes was the worst raw plus/minus of his NBA career. Afterward, he pulled no punches with a harsh assessment of his own play.

“I was minus-31. I didn’t really do much as a whole,” Mitchell said. “I wasn’t there. That can’t happen. I would have been better off not showing up. I didn’t show up at all for my teammates. I’ll fix it.”

The off night jumped off the page in part because the 21-year-old Rookie of the Year candidate has been so consistent throughout the playoffs. Mitchell played a key role in helping defeat Oklahoma City in the first round, topping 30 points twice, and he’s displayed outstanding scoring and playmaking skills while logging major minutes. Friday just wasn’t his night on multiple fronts: Mitchell grabbed just one rebound, his fewest since late-March, and he finished with three assists against three turnovers.

His biggest failings, he believed, came in shot selection and decision-making.

“I’ve got to pass the ball. I was taking terrible shots,” Mitchell said. “I can’t shoot terrible shots. That’s what leads to their transition. … My mindset has always been aggressive. Now they’re playing me in a certain way where I’ve got to be able to make certain passes that I just didn’t make the entire game.”

Coincidentally, Mitchell told reporters Friday morning that his fellow Rookie of the Year candidate, Ben Simmons, shouldn’t be criticized too harshly for his poor showing in the Sixers’ Game 2 loss to the Celtics. Mitchell noted, according to ESPN.com, that Simmons “can’t play great every night” and that “it’s not as easy as some people think.”

While those words should obviously be applied to Mitchell himself, there was also plenty of blame to spread around. The Jazz’s usually stout defense was picked apart by James Harden (25 points, 12 assists) and Chris Paul (15 points, six assists), while Eric Gordon exploded for 25 points off the Rockets’ bench. On offense, Joe Ingles (six points) and Derrick Favors (two points) both struggled badly, and none of the Jazz’s starters attempted a free throw.

“[The Rockets] were the aggressor the entire night,” Mitchell said. “And we didn’t respond in any way.”

Utah must regroup quickly, as a Game 4 loss at home on Sunday would give Houston a commanding 3-1 series lead.