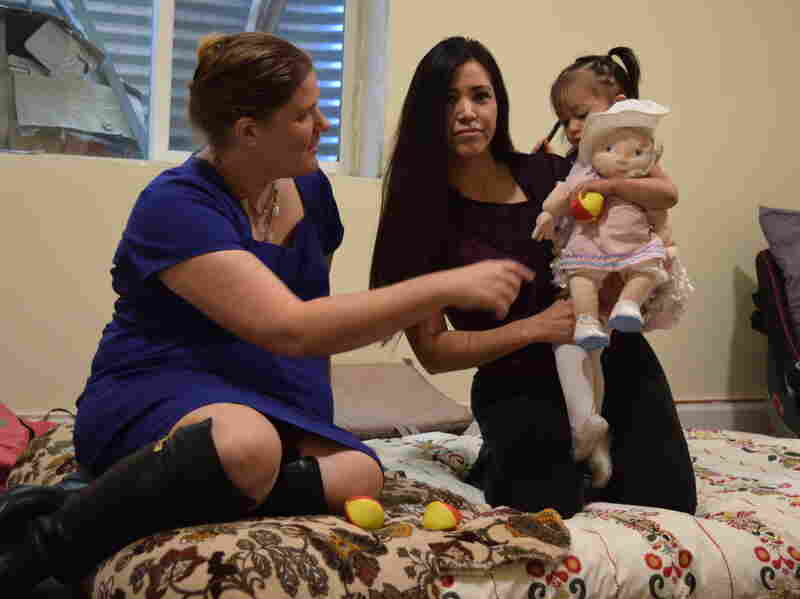 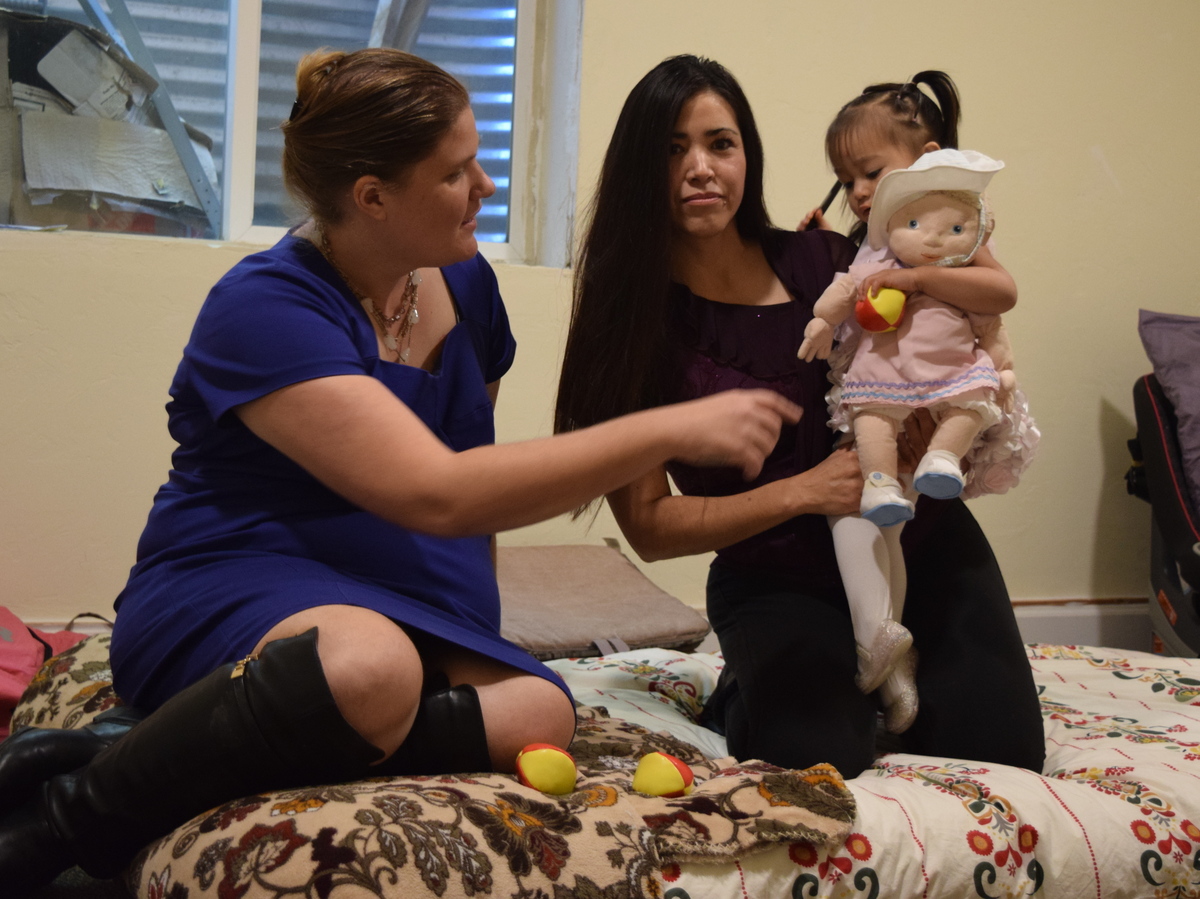 Sandra Lopez holds her daughter, Areli, next to Rev. Shawna Foster in the basement of the Two Rivers Unitarian Universalist parsonage in Carbondale, Colo.

Sandra Lopez hasn’t left the house for eight months. If she does, she could be deported.

People come to her instead; the English tutor might stop by one day, the yoga instructor the next. Lopez says these visits are welcome distractions from the boredom that comes with being in sanctuary.

“When you enter sanctuary, you know the date, the hour, the minute, but you don’t know when you’re going to leave,” says Lopez, who’s originally from Mexico. “It could be months. It could be years.”

While it’s difficult to know exactly how many migrants have been provided sanctuary in houses of worship, Lopez is one of at least 42 people whose cases have been publicly documented, according to a tally by the refugee resettlement organization Church World Service.

It’s a strategy that comes amid an aggressive push by the Trump administration to crackdown on undocumented immigration. As part of that effort, officers with Immigration and Customs Enforcement (ICE) have stepped up arrests. In 2017, ICE made more than 143,000 arrests, a 30 percent rise over the year before, according to agency statistics.

While ICE continues to raid homes, workplaces and courthouses, an agency spokesman said via email that it maintains its policy against detaining or arresting people in “sensitive locations,” such as hospitals, schools or churches.

The U.S. has seen the sanctuary movement before. In response to an increase in Central American refugees during the 1980s, congregations around the country defied immigration laws and opened their doors to those seeking asylum.

It was in that same spirit that the Two Rivers Unitarian Universalist congregation in Carbondale, Colo. received Lopez in October.

For years, Lopez says, ICE granted her stays of removal, but then last fall, they denied her request.

“It was as if they threw a glass of cold water in my face,” Lopez says.

Soon after learning her request had been denied, Lopez and her 2-year-old daughter moved into the Rev. Shawna Foster’s basement in the congregation’s parsonage. Lopez’s husband and their two sons remained at the family’s home nearby.

She might be safe from ICE inside the parsonage, but it could be years before she can safely leave.

This was a risk the congregation knew when it took her in, but Foster, who lives at the parsonage with her family, says offering Lopez sanctuary was a clear, moral duty.

“If Sandra is deported, that’s three children without a mom. Is that really what you want? Is that your sense of justice? Is that what the laws are for?” Foster says.

The congregation eagerly accepted Lopez and her daughter. Any tension that did exist mostly had to do with the fear of retaliation. For example, ICE prosecuting Foster for harboring someone illegally.

Sue Edelstein was on the board of Two Rivers Unitarian Universalist, and wanted her pastor to understand all the risks before taking them.

“My concern was not, ‘Oh, oh, we might get in trouble!’ It was: If the worst happens, where do we stand and how do we handle it?” says Edelstein.

It’s rare for faith leaders to be prosecuted for offering sanctuary. During the movement of the 1980s, for example, it happened only a handful of times. Experts say the optics of federal authorities prosecuting a church official would be terrible. Still, there are no explicit legal protections for those who decide to offer sanctuary.

Foster says she understands the risks, and is prepared to face the consequences, even if it means going to jail and being separated from her children, however unlikely that outcome might be.

“That’s what happens to people who are deported every day,” says Foster. “Every day in this country, there are kids left without parents. And how could I just say, ‘Well no I can’t take that risk’ when I see it’s happening here in this very community?”

Alex, the oldest of Lopez’s two sons, is 20, and before his mom went into sanctuary, had been studying to become a mechanic.

“Going through this, it’s actually just so infuriating that I don’t actually know how to put it into words,” he says.

When his mother went into sanctuary, she stopped working and couldn’t help him pay tuition, so he dropped out of school.

The congregation has raised thousands of dollars to help the Lopez family make ends meet, and to assist with Sandra’s legal expenses.

Alex Lopez is deeply moved by all the support his mom is getting.

“I don’t know how to explain it, like the way that [Foster] … is basically supporting my mom, like, that’s what’s up,” he says.

Still, that doesn’t make it any less painful to see his mom confined like she is, he says. For Sandra Lopez and her family, sanctuary is a gift, but also its own form of detention.