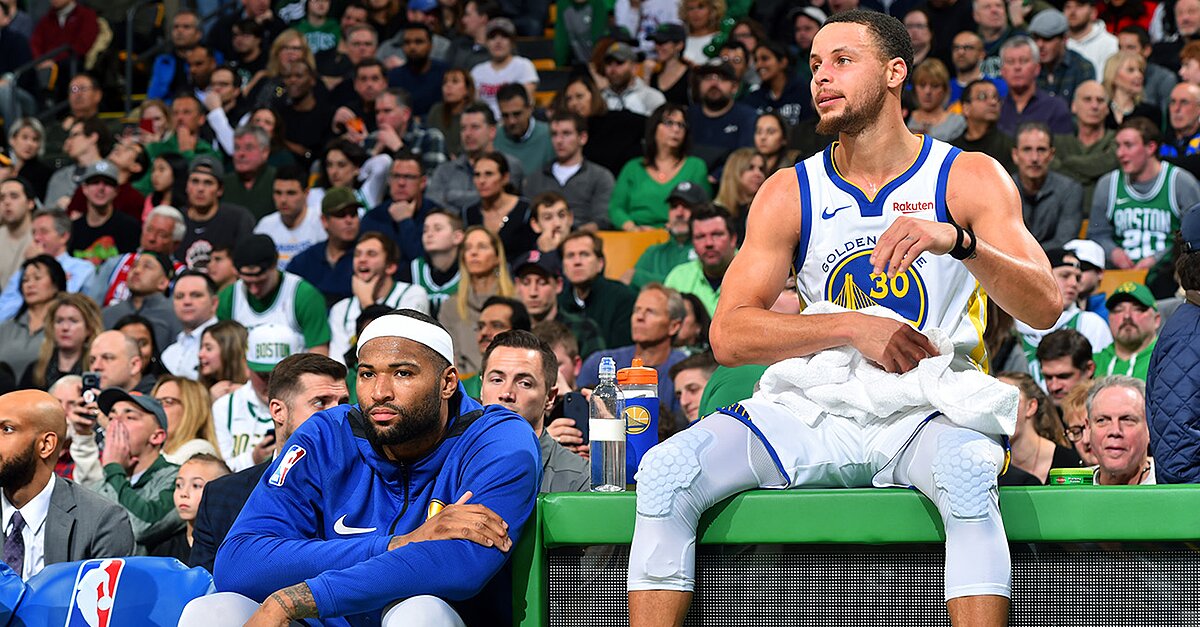 In his fourth game back from his Achilles tear, Cousins showed flashes of what he can bring to the Warriors while also putting his rust on full display as the squad picked up a thrilling 115-111 win over the Celtics.

In his first game of the season, the four-time All-Star fouled out in just 15 minutes. He was able to keep his fouls down the next two contests, but during Saturday’s tilt in Boston, the big man spent more time on the bench than he would have liked.

But when Cousins wasn’t getting called for illegal screens, he showed he can seamlessly fit into Golden State’s scheme and operate as an additional catalyst in ways similar to Draymond Green.

Each member of the Warriors’ starting five can now bring the ball up court. So an offense that was already prone to catching defenses off guard can now move even quicker after misses.

As he gets in better shape and gains even more comfort with his teammates, this is the part of their game that can become the most dangerous. Knowing Green and Durant are liable to rip the ball off the rim and jumpstart the transition offense is one thing. Having to account for Boogie as the ball handler in the open court is like a special cruel assignment the basketball gods created just to see who could fail the least.

When the offense is in the halfcourt, Cousins is a remarkable screen setter who can create space for any of his teammates with ease. As he learns Curry’s and Thompson’s off-ball rhythm a bit more, Cousins might become the most lethal player in the league when setting a pick.

If you don’t properly play the shooter coming off the screen, it’s three points. Curry, Thompson and Durant are going to make a defense pay for giving them space. But if you don’t keep a body properly attached to Cousins, he’ll either be open on the slip going downhill toward the rim, or he’ll be in position to get the offensive board.

But what can take this whole experiment over the top is Cousins’s shooting. Whether it’s stretching the defense all the way out to the three-point line or simply finding space in the midrange, Cousins can keep the defense on edge.

But it was still just his fourth game.

Cousins had to play with five fouls in the fourth and was sat early in the third due to the violations.

The Warriors were ready to play without their newest All-NBA talent for stretches, but the Celtics were more than ready to present a challenge to the defending champions.

Kyrie Irving reminded Golden State he can score against that defense at any time and keep his team in the game. But in addition to creating his own shot, Irving continued his recent run of being a dominant distributor. His 10 assists were a game high and his 32 points were the most on Boston.

The team was playing some of its best ball of the season entering Saturday, so it’s no surprise it battled as hard as it did. In the end though, the opposition had too much firepower.

SHAPIRO: Examining the Trade Market for the NBA’s Most Expensive Players

Durant finished with a game-high 33 after dropping 14 in the opening frame. Curry posted a 17-point second quarter after going scoreless in the first.

And each played a critical role in bringing Cousins into the fold. It was Durant who capped off Cousins’s fast break with a dunk, and Curry was one of the main benefactors of Boogie’s screens.

Despite his 15 points, eight rebounds, three assists and three steals, Cousins was a minus-8 in his 23 minutes. Kevon Looney was a plus-13 in 20 minutes displacing Cousins.

It’s still a work in progress, but the potential is being put on display for all to see. Cousins isn’t 100% just yet, but he’s getting there.

And if he stops picking up fouls as fast as he can, this offense will be practically unstoppable. That’s still a big “if” right now though.