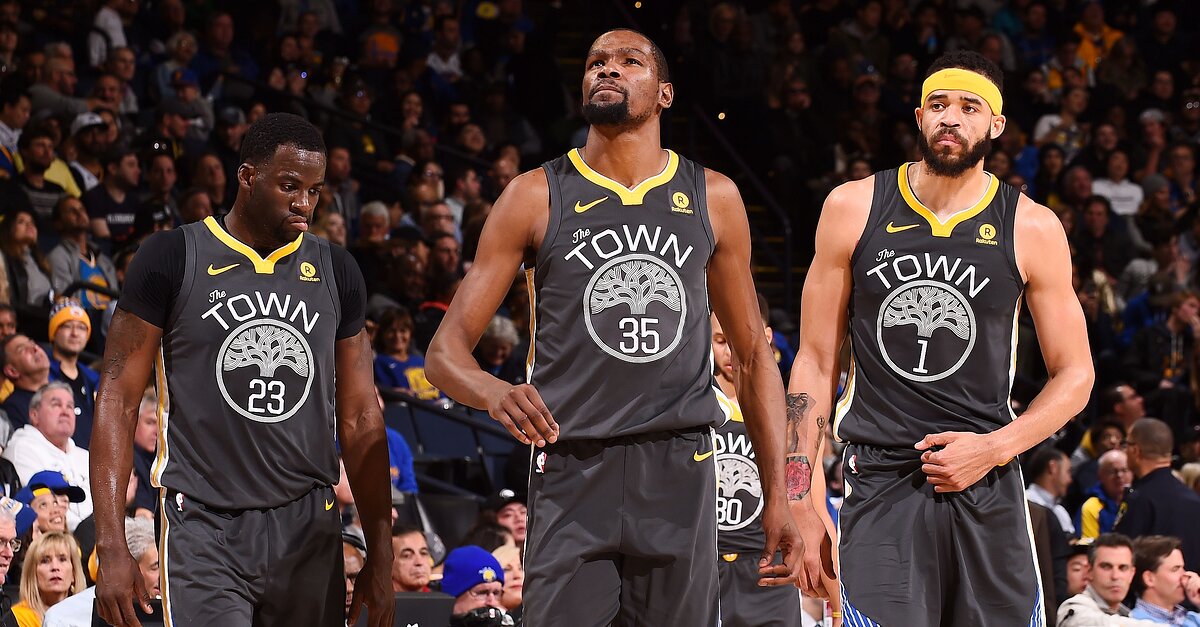 We remember the daggers. The sight of Kevin Durant icing Game 3 with an uncontestable 32-footer will become one of these playoffs’ lasting memories, just as Durant’s pull-up three over LeBron James came to illustrate the Finals last year. There’s something indelible about the way the best athletes in the world resolve those moments of perfect tension. Millions of fans experience an entire arc of emotion, tracing the path of the ball. You can feel those plays.

Yet over the course of any game, there are so many others that come and go without triggering the same sensation. You might even miss them over a bite of food or a comment to a friend as the night shuffles along. Or, if you’re the Cavaliers, you might lose track of them altogether as you endeavor to stop an impossible offense. Durant played as sensationally as advertised in Game 3, which helped the Warriors survive the fact that Stephen Curry and Klay Thompson combined to shoot 26% from the field. A win would not have been possible without Durant’s punishing jumpers. The same could be said, though, of Golden State’s collective onslaught of layups and dunks. While Durant was dealing body blows, the Warriors’ role players worked off the ball to find openings at the rim. We remember the daggers, but the Cavaliers suffered a death by a thousand cuts.

In the sabbatical between Games 2 and 3, Warriors players and staff made clear that they expected to be blitzed. Stephen Curry had been too destructive against switches in Game 2 for Cleveland to continue the series apace. It was time for the Cavs to reconsider their defensive strategy, and blitzing Curry—by bringing two defenders his way on screens as to force the ball out of his hands—was one way of tweaking the dynamic of the series. The problem: Golden State was prepped for the possibility and worked calmly around that pressure after sizing up the coverage.

Curry didn’t shoot well, but he served as the bait that allowed the Warriors to roll into downhill two-on-one opportunities. Golden State’s bigs had already been slipping to the rim throughout this series as a means to exploit Cleveland’s switching. All Curry needed was to play under control and find a means to connect the dots—like, say, one of the most intuitive and natural playmaking bigs in the league:

The rhythm of this sequence speaks to the confidence of a team that knows exactly what it’s doing. As soon as Curry sees the blitz, he gives up the ball to Draymond Green. And once Green notices the primary help defender on the play (Tristan Thompson) sliding over to deal with JaVale McGee’s slip to the rim, he launches into action with a drive. Thompson is stuck; committing too much to Green would give up a lob for McGee, but sticking to McGee would surrender a layup to Green. Thompson winds up splitting the difference and giving up a dunk in the process.

These sorts of plays spring from the intersection of two different defensive choices: the call to blitz Curry in the first place and the understandably lax defense on Green at the three-point line. Teams should help off of Green, who is shooting 27% from beyond the arc in these playoffs. Yet to do so while also blitzing Curry leaves Green to operate without the slightest impediment. Every passing or driving lane he could ever want is there.

Which is why Golden State could run variations on that basic setup all night. On this iteration, Green—rather than drive straight to the rim—launches into an immediate dribble hand-off with Curry after McGee’s initial pick-and-roll. The result is more or less the same:

Green, at the moment of the catch, is able to scan the entire defense for overextension. He knows which players are a step or two out of position and moves quickly to capitalize. This kind of pressure defense works against many opponents because it forces hesitation. If Curry freezes when he sees a second defender coming his way, the entire possession might be swallowed up. If Green stops to survey the action for even a second before making a choice, he would give the defense all the time it needs to recover. This is the functional difference between players who can make reads on the move and those who can’t; playmakers as fluent as Green will enter into the action with the defense off-balance and move to keep them that way.

The Warriors are absurdly talented, but even more resourceful; between Green, Andre Iguodala, Shaun Livingston, and even Durant (who finished with seven assists), Golden State has the facilitation to work over even impeccable defense. Cleveland offers a more forgiving impediment. This may be the most focused and consistent defense the Cavs have played all season, but still it’s riddled with mistakes. What on earth would possess J.R. Smith to overplay Durant so dramatically as to give him unencumbered access to the rim?

How do Kevin Love and George Hill get so tangled in their switching on this sequence when the players they’re guarding (Thompson and Iguodala) are barely moving?

“When you have great basketball players but also that can also think the game and be very cerebral about the game, that’s what adds the level of stress,” James said following Game 3. “Because you know that you can never, ever relax.

“You know if you relax, they make you pay. And making you pay could cost you a game.”

This is how a team that ranked in the bottom five in field-goal attempts at the rim during the regular season could suddenly derive half its offense from the restricted area in the NBA Finals. Getting the ball out of Curry’s hands is only the beginning of a process the Cavs can’t competently see to the end. There’s a gap in length and athleticism between McGee and Tristan Thompson; a gap in situational awareness between Smith and either Curry or Thompson; and a gap in strategic coherence between the dynastic superteam and the contender remade at the trade deadline. If Golden State’s stars alone don’t spell the end for Cleveland, the system that guides their movement surely will.