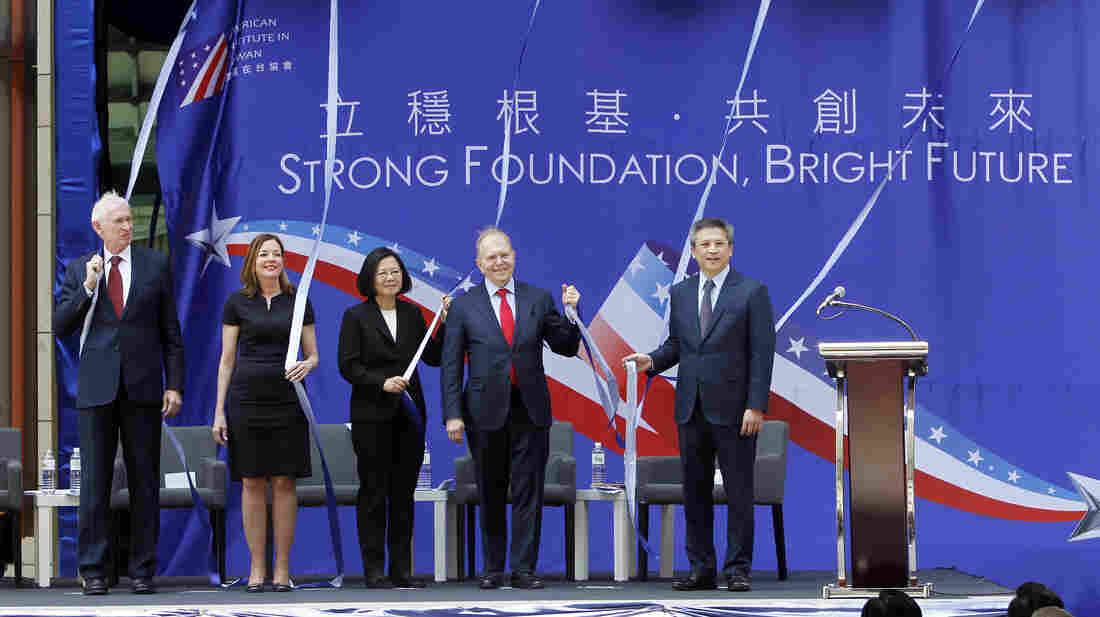 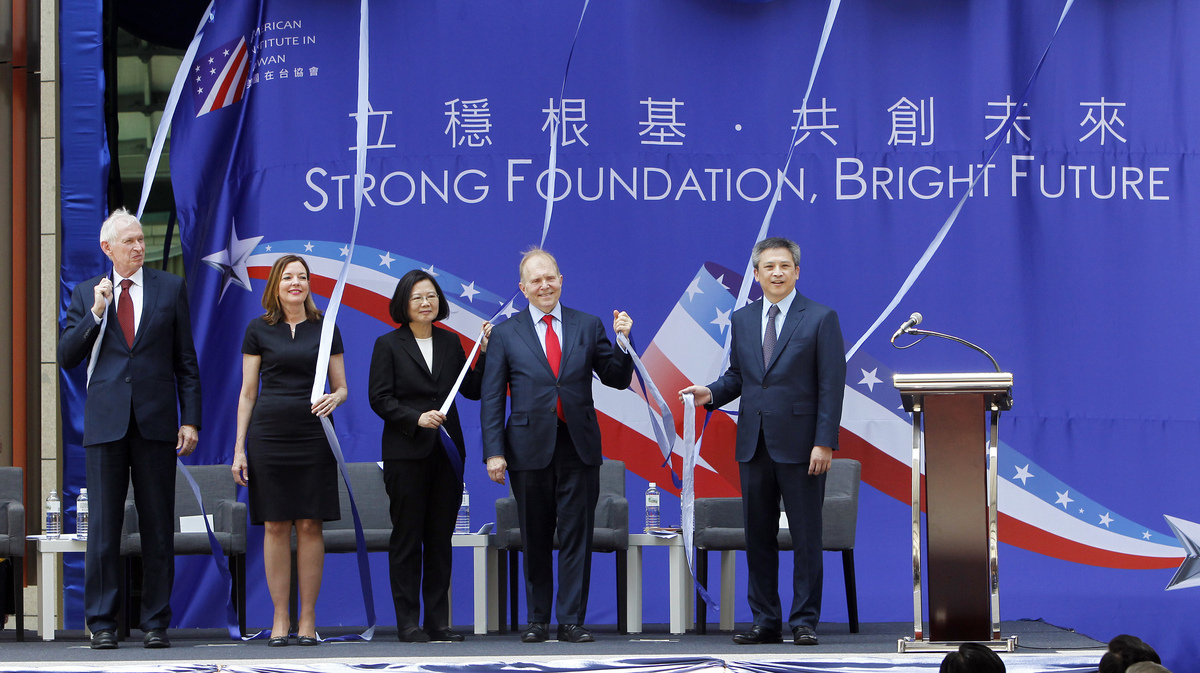 Politicians and officials — including Taiwan’s president, Tsai Ing-wen (center) — pose during the dedication ceremony Tuesday for the American Institute in Taiwan, the de facto U.S. Embassy in Taipei.

The same day that President Trump and North Korean dictator Kim Jong Un held their historic summit in Singapore, several U.S. politicians and officials attended another, far less heralded ceremony just to the north on Tuesday: It was the dedication of a ritzy new complex for the American Institute in Taiwan, or AIT — and China wasn’t happy about it.

That’s because, despite the innocuous name, the organization has long functioned as the de facto U.S. Embassy in Taiwan, the self-ruled island that Beijing considers a renegade Chinese province. Since the U.S. established diplomatic ties with China nearly four decades ago, Washington has acknowledged that claim and cut ties with Taiwan — formally, at least.

Yet the U.S. and Taiwan have maintained a robust informal relationship. And on Tuesday, the representative office that has handled many of those informal affairs got a roughly $256 million upgraded compound in Taiwan’s capital, Taipei.

Taiwan’s president, Tsai Ing-wen, told the crowd at the dedication ceremony that the building marks “a new chapter in a story that has been decades in the making.”

“The friendship between Taiwan and the U.S. has never been more promising,” Tsai said. “The great story of Taiwan-U.S. relations remains to be filled with the efforts of those that will one day occupy this building.”

Today we dedicate the new AIT compound,we also rededicate ourselves to our shared commitment that as free & open democracies, #Taiwan & #US have an obligation to work w/ one another to defend our shared values. I look forward 2 an even brighter chapter in our enduring friendship! pic.twitter.com/le1xXvS7tc

Also in attendance were Rep. Gregg Harper and Marie Royce, the U.S. assistant secretary of state for educational and cultural affairs.

“We may be separated by a great ocean,” Royce said in prepared remarks, “but our shared convictions, values, and trust form a strong foundation for cooperation across a range of issues.”

Chinese authorities made clear they did not share that sense of celebration, however. Geng Shuang, spokesperson for the Chinese foreign ministry, said Tuesday that Beijing has lodged a protest with the U.S. over the ceremony.

“I must point out that the US, by sending officials to Taiwan under whatever pretext, severely violates the one-China principle and three China-US joint communiques, interferes in China’s internal affairs and exerts negative impact on China-US relations,” Geng said during a news conference.

The “One China” policy Geng references was adopted by the U.S. in 1979. The policy dictates that the U.S. formally recognize only one Chinese government — the Communist apparatus based in Beijing — and officially eschew relations with a Taiwanese government, which has proclaimed itself the “Republic of China.”

Yet, as NPR’s Rob Schmitz explains, Washington has been creeping steadily closer to Taiwan under the Trump administration. That includes a bill encouraging visits between U.S. and Taiwanese officials at all levels, unanimously passed by Congress and signed into law this year.

And China has taken close notice of these developments.

Beijing has been exerting pressure on businesses and countries to officially consider Taiwan part of China — including successful efforts with certain airlines, Burkina Faso and the Dominican Republic, which cut ties with Taiwan earlier this year. China also has recently pointedly conducted several military drills in the Taiwan strait and around the island.

“We urge the US to honor the commitments it has made to the Chinese side on the Taiwan issue and correct its wrong actions,” Geng added Tuesday, “thus avoiding undermining China-US ties and cross-straits peace and stability.”

Meanwhile, the AIT is happily plowing ahead with its big move. The organization, which was first established in 1979 after the diplomatic shift, plans to officially relocate to the new facility this fall.

And AIT Director Kin Moy, for one, said Tuesday he eagerly welcomes this “testament to this friendship, to the U.S. commitment to Taiwan, and to our staying power in Taiwan.”

“I offer you this,” he said, “a tangible symbol that the United States is here to stay.”