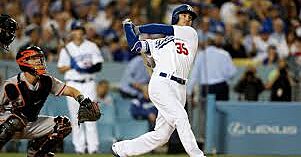 Manager Dave Roberts said he has talked to Bellinger about this issue before.

Dodgers star Cody Bellinger was benched during Sunday’s game against the Giants for not hustling on his fifth-inning double, manager Dave Roberts said.

Bellinger singled in the second inning and doubled to lead off the fifth, but was doubled off second base on a line drive by Kyle Farmer. Watch the video of the events below.

He responded to Roberts’ comments, saying he was surprised at his removal from the game and that he always plays hard.

The 22-year-old is hitting .277 with three home runs and 12 RBIs on the season, but the Dodgers have struggled out of the gate to a 12-15 record after reaching the World Series a year ago.