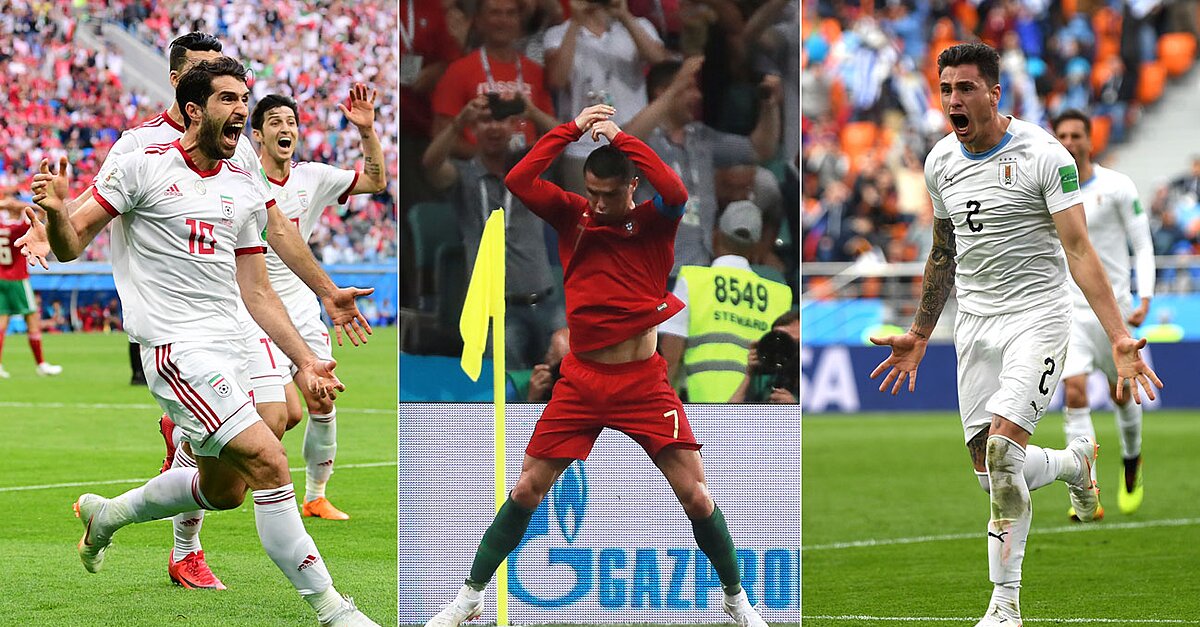 Portugal’s heart-stopping 3-3 draw vs. Spain headlined a day full of drama. But Uruguay and Iran won on late goals, with Jose Gimenez heading La Celeste over Egypt in the 89th minute, while an unfortuante Aziz Bouhaddouz own goal gifted Iran its 1-0 win over Morocco in the 95th minute.

Following the unexpected fireworks in Russia’s 5-0 win over Saudi Arabia, the 2018 World Cup is off to an incredible start.

Here are my five thoughts on the day:

The 33-year-old superstar couldn’t have gotten off to a better start at World Cup 2018, producing a majestic hat trick capped by one of the most pressure-packed late free kick goals you’ll ever see. Ronaldo began his big night almost from the opening whistle, drawing a penalty from Nacho with a “young Cristiano” stepover to open the scoring in the fourth minute. Then, in the 44th minute, Ronaldo fired a low shot that David De Gea, viewed by many as the world’s best goalkeeper, booted into his own net Rob Green-style. (Of all the things that happened today, that was absolutely the most surprising.) And then to cap it off, Ronaldo took advantage of an unwise foul by Gerard Piqué to curl home the late equalizer when it looked like Portugal was done. Both teams left with one point, but this will feel like a win for Portugal and a loss for Spain.

This was an adrenaline-rush game that brought this World Cup to life. Spain came from behind twice, and with some fantastic passing work by Andrés Iniesta, Isco and David Silva, the 2010 champions had some glorious moments of pure Spanish creativity, displaying one-touch triangle passing, quick switches of direction and wizardry in tight space. But when it came time to score the goals, they came in a decidedly un-Spain way.

That is to say, from Diego Costa, whose marvelous individual work created his first goal—yes, there was contact with Pepe, but Pepe embellished it—and who finished an old-fashioned set-piece sequence for his second. Nacho’s beautiful laser put Spain ahead until Ronaldo’s equalizer, but Spain doesn’t get a point in this game without some classic Costa finishing. Is it possible for Costa to mix with Spain’s passing style? Yes, yes it is.

• How about that steel from Uruguay/Atlético Madrid?

Uruguay was heading for a frustrating 0-0 tie against a Mohamed Salah-less Egypt until José Giménez headed home a late set-piece goal to bag the three points for the Celeste. Is it any surprise that a tough-as-nails Atlético Madrid player made the difference on a set-piece? Not one bit. Giménez and Diego Godín, his Uruguay and Atlético teammate, are blessed with an iron will to stamp their identity on game’s decisive moments, especially on set pieces. They do it for club and country, and it’s uncanny.

There’s a misperception that only underdogs rely on set pieces, but bigger teams like Uruguay and Germany (and Atleti, for that matter) are great at them. Giménez and Godín are symbolic of the Uruguay team—a terrific mix of youth (Giménez is 23) and veterans (Godín is 32). And that’s why I think their team could make a deep tournament run.

• It’s been a rough week for Morocco

Two days after losing out on the hosting rights to World Cup 2026, Morocco took another gut-punch when a 95th-minute own goal by Aziz Bouhaddouz—and let’s be honest, an own goal struck with authority—gave Iran a shock 1-0 victory. Give plenty of credit to Iran for staying strong when Morocco had the majority of the ball and the chances; goalkeeper Alireza Beiranvand made some terrific saves, and the Iranian counter had its moments as well. But in a group that features Spain and Iran, Morocco will regret not finishing and failing to take three points from a game that where victory was within reach.

Iran won its second World Cup game in its history and gave itself a chance to advance if it can get a result against Portugal or Spain. Coach Carlos Queiroz will be overjoyed.

The Egypt coach said barring any unforeseen circumstances, Pharaohs superstar Salah would play against Uruguay, at least as a substitute. But Salah ended up staying on the bench for all 90 minutes and looking forlorn when Uruguay won it near the death.

The fact is that coaches lie about this stuff ahead of games all the time. Remember Jurgen Klinsmann with the injured Jozy Altidore during World Cup 2014? After following Salah’s injury story closely for the past three weeks, Cúper’s announcement surprised the heck out of me—Salah had barely returned to training—but now we know he was blowing smoke, mainly just to unsettle Uruguay.

The other question was this: Should Cúper have brought on Salah in the last 10 minutes just to give Egypt a mental boost in trying to hold on for the tie? I don’t think so. Salah wasn’t ready to play today, and he certainly wasn’t marking guys in the box on Uruguay’s decisive set-piece goal.