President Trump presides over a meeting about immigration with Republican and Democratic members of Congress at the White House in January. Chip Somodevilla/Getty Images hide caption 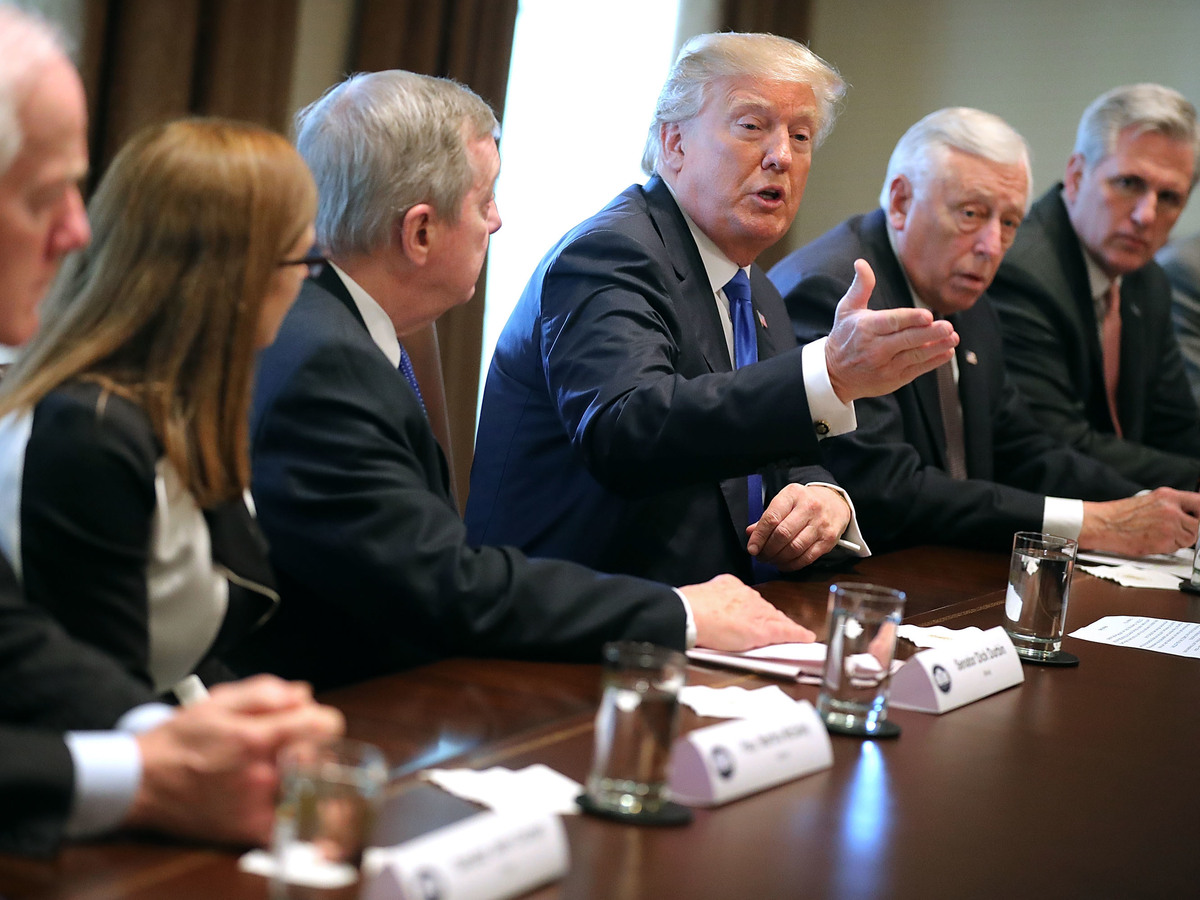 President Trump presides over a meeting about immigration with Republican and Democratic members of Congress at the White House in January.

Congressional Republicans are racing to find legislative options to stop a White House policy of separating migrant children from their parents at the U.S. border amid widespread condemnation of the practice.

Senate Majority Leader Mitch McConnell told reporters Tuesday that he wants to pass narrow legislation to end the Trump administration policy despite signs that the White House will not support that approach.

“In order to fix this problem you can’t fix all the problems,” he told reporters. “We’ve wrestled with this issue for a decade.”

McConnell didn’t provide any specifics of any potential bill. Senate leaders are working through various proposals to find consensus as more and more Republicans are speaking out in sharp opposition to Trump. It is one of the rare instances where Republican leaders in Congress have been willing to publicly rebuke the president on policy and actively consider legislation to oppose him.

Trump further complicated the already chaotic atmosphere around immigration Tuesday afternoon when he seemed to dismiss some nascent proposals to change the policy and vowed to change House GOP legislation.

“We have one chance to get it right; we might as well get it right or let’s just keep it going, but let’s do it right,” Trump said. “We have a chance.”

Trump to make his case to Congress

Trump is scheduled to meet with House Republicans on immigration Tuesday evening, and lawmakers expect the family separation issue to be a prominent part of that conversation.

Most Senate Republicans left a weekly closed-door policy meeting Tuesday repeating the same message: Congress should act quickly to end the policy and then deal with other immigration issues later.

“We want to fix the entire system; we don’t want to just tinker with it,” Sanders said. “The president is tired of watching people kick it down the road and not take responsibility and not fix the problems that we have.”

“What I’m asking Congress to do is to give us a third option which we have been requesting last year,” Trump said. “The legal authority to detain and properly remove families together as a unit.”

NEWS: Senator Hatch plans to send a letter to the Justice Department later today calling for a pause on family separations until Congress has time to pass a legislative solution to this issue.

Many in Congress, including many Trump supporters, say he is wrong. A growing number of Republicans have pushed back, including Sen. Orrin Hatch, R-Utah, who sent a letter to Attorney General Jeff Sessions urging him to suspend the policy immediately to give Congress time to address the issue.

“Although enforcing our immigration laws is an essential responsibility of the federal government, it must be done in a way that is consistent with our values and ordinary human decency,” the letter stated.

The letter takes direct aim at Trump’s argument that Congress is to blame for the separations. “The immediate cause of the crisis is your Department’s recent institution of a ‘zero tolerance’ policy under which all adults who enter the United States illegally are referred for prosecution,” it read.

The clash between Trump and congressional Republicans makes it increasingly likely that Republicans will need to work with Democrats if they want to pass a bill that could overcome a presidential veto. But Senate Minority Leader Chuck Schumer, D-N.Y., said Tuesday that Trump should resolve the policy on his own.

“Mr. President, you started it, you can stop it, plain and simple,” Schumer told reporters.”

The clash is the latest flare-up in what has become a nearly monthlong drama within the Republican Party over immigration. Trump’s latest demands add even greater pressure on congressional Republicans to pass legislation despite deep, long-standing divides within the party over how to handle both legal and illegal immigration.

Many Republicans worry that it could take Congress weeks or more to craft a bill that can pass both the House and the Senate. Congress has not been able to pass comprehensive immigration legislation for several decades. One hurdle this week is that Republicans can’t agree whether they should fix the family separation issue on its own or include it in a broader bill — like spending legislation or a more comprehensive immigration policy overhaul.

“Congress doesn’t have the best track record in moving quickly on things like this,” said Arkansas Republican Sen. Tom Cotton.

The House is expected to vote later this week on a pair of immigration proposals that are anticipated to address the issue of family separation, but it isn’t clear that either bill has the votes to pass. Many Republicans say privately that they are concerned that a failure to act quickly will result in a prolonged crisis and public outrage. And this latest internal battle over the issue comes months before the November midterms. GOP lawmakers want to tout economic numbers and their tax cut bill, but the president is keeping the spotlight on the contentious issue of immigration instead.

The result has been a haphazard series of targeted legislative proposals from different factions of the GOP that address pieces of the problem, instead of a broader immigration overhaul effort.

Texas Sen. Ted Cruz was among the first Republicans to say he will introduce legislation that would double the number of federal immigration judges to 750, expand detention facilities with temporary shelters and expedite processing of asylum requests while mandating that families be housed together during the proceedings.

But Trump seemed to dismiss that proposal, and others like it, in his speech on Tuesday afternoon.

“Ultimately we need to have a real border, not judges,” Trump said. “Thousands and thousands of judges they want to hire. Who are these people?”

Increased judicial capacity is the cornerstone of several of the plans circulating among Republicans. Trump’s statement raises fresh doubts that he will sign any solution that is reached.

Senator John Cornyn, R-Texas, the number two Republican in the Senate, is also working on legislation that would expedite hearings and avoid pulling children away from their parents.

“I don’t think we should have to choose between enforcing the law and keeping families together,” Cornyn said. “I think we can do both.”

Another proposal from conservative House Freedom Caucus Chairman Rep. Mark Meadows, R-N.C., would keep families together while cracking down on the rules for those seeking asylum. Meadows announced the proposal following a meeting with Trump on Tuesday.

“By cutting down on asylum fraud, we can keep families together without running a greater risk of traffickers or violent criminals using children to take advantage of the rules,” Meadows said in a statement. “We need to better enforce our immigration laws, but we can do so while keeping parents and children together.”

Meadows said his bill is a backup plan if the House fails to pass broader immigration proposals this week.

Immigration votes this week in the House

My statement regarding the “zero tolerance” policy that has forced the separation of children from their parents at the United States – Mexico border: pic.twitter.com/b7KlmE1ltE

The first bill up for a vote in the House on Thursday will be a hard-line conservative proposal written by House Judiciary Committee Chairman Bob Goodlatte, R-Va., that is expected to fail. The second bill is a compromise between conservatives and centrists that has been brokered by House GOP leaders. That bill has a slightly better odds, though leaders have stopped short of promising it will pass.

Many members are wary of supporting any immigration bill following a chaotic week where Trump appeared to switch his position on immigration several times.

Some members fear that Trump has a mercurial history of supporting legislation, like the omnibus spending bill earlier this year and health care bills in 2017. In both cases, Trump said he backed certain policies only to turn around later and blast the same idea — and those who voted for them — later on Twitter.

That lack of confidence and fear of retribution could make it significantly harder for Republicans to pass any politically risky immigration proposals ahead of the midterm elections in November.