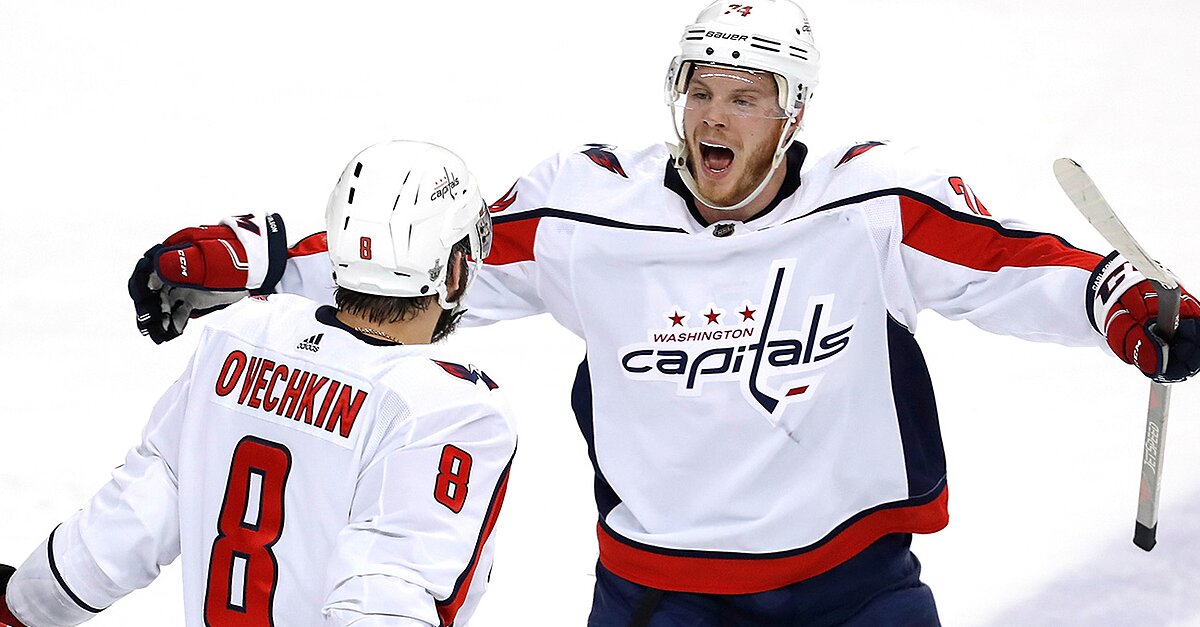 It was catharsis personified, a sight at once fleeting and everlasting. Neck craned back, palms open wide, eyes shut tight, Alex Ovechkin looked as if he had just banished decades of demons with one full-bodied exhale. Some images inspire a thousand words. Only seven letters were necessary here: f-i-n-a-l-l-y.

Finally, the Capitals had eliminated their longtime tormentors after falling to Pittsburgh in each of the past two postseasons, both times watching as the Penguins won the Stanley Cup. Finally, a major pro sports team in Washington had reached the conference finals, breaking a 20-year streak of citywide failure, the longest such stretch in the country. Finally, all manner of historical heartache faded on May 7 when Ovechkin nudged the puck ahead to Evgeny Kuznetsov, who tore past the Penguins’ blue line in overtime and bore down on goalie Matt Murray.

As his captain and countryman fell into a trance on the ice at Pittsburgh’s PPG Paints Arena, Kuznetsov started flapping like a bird. The 26-year-old Russian center borrowed this goal celebration from the FIFA video game series, a fitting choice given that his dazzling skill set is often better suited for a remote controller. Yoked on coach Barry Trotz’s top line for much of the 2017–18 season, he and Ovechkin pummeled the Penguins with six combined goals and seven assists over the six-game, second-round series.

After opening the Stanley Cup playoffs with consecutive home losses to the Blue Jackets, the Capitals have taken flight. They looked unburdened and unleashed through the first two games of the Eastern Conference finals, sapping the electricity from an ordinarily crackling Lightning crowd with 4–2 and 6–2 victories at Amalie Arena. “That pressure of being the No. 1 seed the last couple of years, I think, weighed on us a little bit,” defenseman Matt Niskanen says. “I don’t know if outside expectations being lower helped us or not. But, man, the group found a lot of energy when we’ve needed it so far.”

No doubt that exuberance derives from Ovechkin, the gray-haired howitzer whose new playoff tradition involves a full-speed solo lap around the rink at the start of every road practice while teammates watch and cheer. Now 32, he is a leading Conn Smythe candidate with 10 playoff goals through May 13, second to the Jets’ Mark Scheifele. But Washington has received equally rousing boosts from an inexperienced supporting cast. With Nicklas Backstrom (right hand), Tom Wilson (suspension) and Andre Burakovsky (“minor upper-body” surgery) all sidelined for Game 6 against Pittsburgh, Trotz boldly dressed five rookies, two of whom were making their playoff debuts: center Travis Boyd and winger Nathan Walker, the NHL’s first native Australian, who recorded an assist and then hopped like a kangaroo in the visiting dressing room.

“This is a good example of what a real team can do,” Trotz told his players then.

See, the vibe is loose in typically tense D.C. “It just feels like it’s a totally different team,” says professional development coach Olaf Kolzig, goalie for the last conference finals–bound Capitals team, in 1997–98. “They never seem nervous. They never seem like they’re squeezing their sticks, even when we get behind.” To wit: Asked whether he had scouted Tampa Bay by watching its tidy five-game series win over the Bruins in the second round, Niskanen replied that he was too busy waging war against center Jay Beagle on Mario Kart 64. “Both series, we were able to block out any negative stuff and just play,” Niskanen says. “You’re competitive as heck, but you’re also free.”

Even behind the bench Trotz looked unencumbered as he leaped and wrapped longtime assistant Lane Lambert in a bear hug after Kuznetsov’s breakaway. Like Ovechkin, the 55-year-old Trotz had carved an impressive career résumé—fifth all time in games and wins—despite never taking a team past the second round. His wounds were further salted when the Predators, the team he steered from 1998–99 to 2013–14, reached their first Stanley Cup final last spring. But after what he called an “enlightening” summer—featuring plenty of cabin relaxation and a lengthy meeting with Ovechkin in Russia, where Trotz’s son Tyson teaches English—the coach has made all the right personnel moves while adopting a more hands-off approach. “I just look at everything way different than I ever have,” he says. “In the past [I was] probably a little more wound up.”

That is the sound of six million heads nodding in agreement. Over the past 20 years Washington-area fans have endured overtime disasters and ninth-inning collapses, Robert Griffin III’s blown-out right knee and Stephen Strasburg’s shut-down right arm. On May 6, the afternoon before the series clincher against the Penguins, the D.C. Sports Hall of Fame honored its class of 2018 with a ceremony at Nationals Park. Mingling among fellow inductees, former Capitals winger Peter Bondra found himself discussing the same topic over and over.

“Everybody was asking about the Capitals,” says Bondra, now director of alumni affairs. “You look at other cities like Philadelphia or Boston, how they celebrate. I think Washington needs something good to happen in sports.”

The billboards loom large over Interstate 95, greeting both north- and southbound travelers between D.C. and Baltimore. Emblazoned with a team picture of the Caps, the signs declare, we believe.

Still, plenty did not. “None of these people saw this coming, and neither did I,” NBC Sports analyst Mike Milbury said after Washington thrashed Tampa Bay in Game 2. “These are not the Capitals of past years.” This statement applies on several levels. While hardly the loaded juggernaut that earned Presidents’ Trophies in 2016 and ’17—salary-cap constraints forced an exodus of talent last summer—this season’s group is unquestionably more cohesive and resilient on the ice, evidenced by its seven playoff road wins, matching a franchise record set in 1998. “Just getting over that mental baggage and scar tissue we’ve had against Pittsburgh,” Kolzig says, “it really eased our psyche and gave us an extra boost of confidence.”

Just look at Kolzig’s modern-day counterpart. When the playoffs began, goalie Braden Holtby was wearing a baseball cap and backing up Philipp Grubauer, relegated to the bench after a mid-February slump. Upon reclaiming his role early in the Columbus series, the ultra-mellow 28-year-old—known for strumming his acoustic guitar at the practice facility before starts and solving crossword puzzles with teammates each morning—has gone 10–3 with a .926 save percentage and a 2.04 goals-against average. “He obviously had a chip on his shoulder and wanted to prove to people that the Braden Holtby they saw in the second half of the year was not the real Braden Holtby,” says Kolzig. “And he has.”

The Capitals have plenty of those types on their roster. Fourth-line wingers Alex Chiasson and Devante Smith-Pelly joined the team this season on a training camp tryout and a two-way contract, respectively. Lars Eller was acquired as a frustrated castoff from Montreal; now he is admirably replacing Backstrom as the No. 2 center. While hardly the Golden Knights’ scrap heap of misfits—expansion Las Vegas is currently battling Winnipeg in the Western finals—Washington has unlocked a blue-collar ethos noticeably absent from past runs.

As Eller said after his three-point performance against Tampa Bay in Game 2, “Guys who aren’t always expected to score—you need that kind of contribution up and down the lineup in the playoffs if you want to win.”

Deploying this generation’s deadliest offensive weapon certainly helps too. With 7.1 seconds left in the first period of the series opener and Lightning winger Chris Kunitz serving a too-many-men minor penalty, Ovechkin released a 48-foot slapper from the deep slot that opened the floodgates for the rout. Two nights later, upon punching Kuznetsov’s slick feed past goalie Andrei Vasilevskiy for a 5–2 lead, the Great Eight flashed his gap-toothed smile and gave a subtle flick of the wrist, as if he were Steph Curry swishing a backbreaking three.

Of course there are no guarantees in the NHL playoffs; just ask the 2003 Capitals, who took a 2–0 lead over Tampa Bay in the first round and then lost in six. Still, Ovechkin has already produced an indelible image for a purified fan base. And even if he struggled to recall what happened moments after Kuznetsov clinched the Pittsburgh series—which he did recently, speaking on CNN—the rest of Washington won’t soon forget the arms, the exhale, the finally.

“I don’t know if there is a group that knows better how hard it is to get to this point,” Niskanen says. “So don’t waste the opportunity. I think we’ve got to be greedy. We’ve got to want more.”