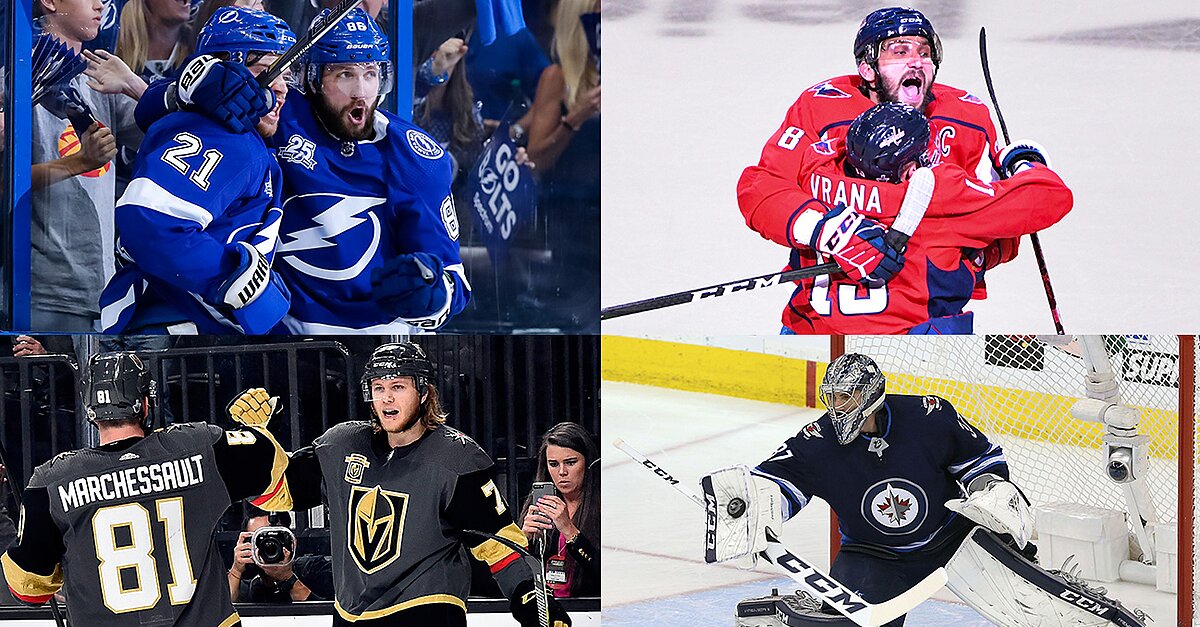 With a 5–1 loss to the Jets in Game 7 of their second-round series on Thursday night, the Presidents’ Trophy–winning Predators have been eliminated, foiling the early-April predictions of the majority of SI’s NHL writers and editors. As the midpoint of the postseason arrives, we’re giving ourselves a do-over after watching the field of 16 get whittled down over the first two rounds.

So who’s going to win the Cup: Washington, Tampa Bay, Winnipeg or Vegas? Below, the SI staff peers into their personal crystal balls to determine who will emerge from an unexpected final four.

Alex Prewitt: The Lightning only needed 10 total games to reach their third conference finals in four years, romping past New Jersey and Boston on the backs of strong goaltending, ferocious forechecking and a defensive corps that boasts two shutdown anchors on the left side (Victor Hedman and Ryan McDonagh). But what separates Tampa Bay from the other remaining contenders is the emergence of middle-six centers Brayden Point and Anthony Cirelli, both former third-round draft picks who have earned the trust of coach Jon Cooper in their first Stanley Cup playoffs. Depth matters up front, especially when facing the offensive firepower of Washington and whatever monster emerges from the west. (Let’s say Vegas, because at this point why the hell not?) And no team is better equipped for the long haul, top to bottom, 1 through 18, than the Lightning.

Jeremy Fuchs: I started with Nashville, and while it’s tempting to stay with the West, the pick here is the Lightning. Winnipeg and Vegas will beat up on each other, while Tampa has the ability to sail past Washington in as little as five games with its balanced, deep and experienced lineup. The one-two punch of Steven Stamkos and Nikita Kucherov is unmatched. The defense, led by three legit No. 1’s, is unmatched. The Lightning are the most complete team left, and although Vegas will give them a fight in the finals, they will lift the Cup.

Tyler Horka: The Bolts were one of the league’s best teams all year, and the acquisitions they made at the trade deadline have paid off in the playoffs. J.T. Miller has seven points. Ryan McDonagh (alongside his old Rangers teammate Dan Girardi, who was signed last summer) has been effective offensively and offered the usual stalwart blue line play. And then there are all the forwards that made Tampa the offensive force it was during the first half of the year. Nikita Kucherov, Steven Stamkos, Brayden Point—the firepower goes on and on. Sure, Washington has stars of its own, but for the most part, they haven’t been here before. The Lightning went to the Stanley Cup Final with a very similar roster three years ago, and they have more than enough talent to do it again. Jon Cooper might need to win a Game 7 in a rowdy road environment in Winnipeg to claim the Cup, but I’m counting on his team to do just that.

Tim Hackett: They’ll be facing a different opponent than I originally predicted, but the Lightning are still going to win the Stanley Cup for the first time since 2004. Sure, they have an excellent top line, but they would not be here without balance scoring, solid team defense and reliable goaltending from Andrei Vasilevskiy. With six goals (including three game-winners) and 12 points, Nikita Kucherov would probably take home the Conn Smythe if Tampa Bay went all the way, but without Tyler Johnson, Brayden Point and Ondrej Palat, the Lightning might not still be here. The defense went into absolute lockdown mode following a poor Game 1 showing against Boston. I might not be upset if Braydon Coburn and Mikhail Sergachev were my second defensive pairing, but Jon Cooper gets the luxury of having them at No. 3. Washington won’t be an easy out, but Tampa deserves to be the favorite.

Kristen Nelson: Although I didn’t make an official prediction prior to the start of the playoffs, let’s just say my yinzer roots are … disappointed. But with the two-time defending champs humbled, I’m all-in (pun intended) on Vegas. I buy into what the Knights have magically accomplished in their inaugural season. And why not? The Knights have made their postseason run look easy so far. Marc-Andre Fleury has looked as good as ever with four shutouts so far, and the Knights’ top line is offering him quite a bit of offensive support, combining for 32 points in 10 games. Tampa Bay will be their toughest opponent of the postseason, but the Knights will continue with their medieval sorcery. The Penguins won’t make it to three straight Stanley Cups, but Flower will.

Eric Single: The Capitals have slayed their personal black and yellow demons—what could possibly scare them about a series against the East’s best team, followed by a Cup Final matchup with the two squads that have turned in some of the playoffs’ most impressive stretches of dominance? This is certainly an inopportune time for Nicklas Backstrom to be dealing with a hand injury of undisclosed severity after blocking a shot in Round 2, but Alex Ovechkin has never been more involved in Washington’s offensive success, from his trademark one-time blasts to the head-man pass that set up Evgeny Kuznetsov’s series-clinching goal in Pittsburgh. The Caps’ year has arrived, and for one last exorcism, they will crack former Penguins nemesis Marc-Andre Fleury and the relentless Golden Knights to make franchise history.