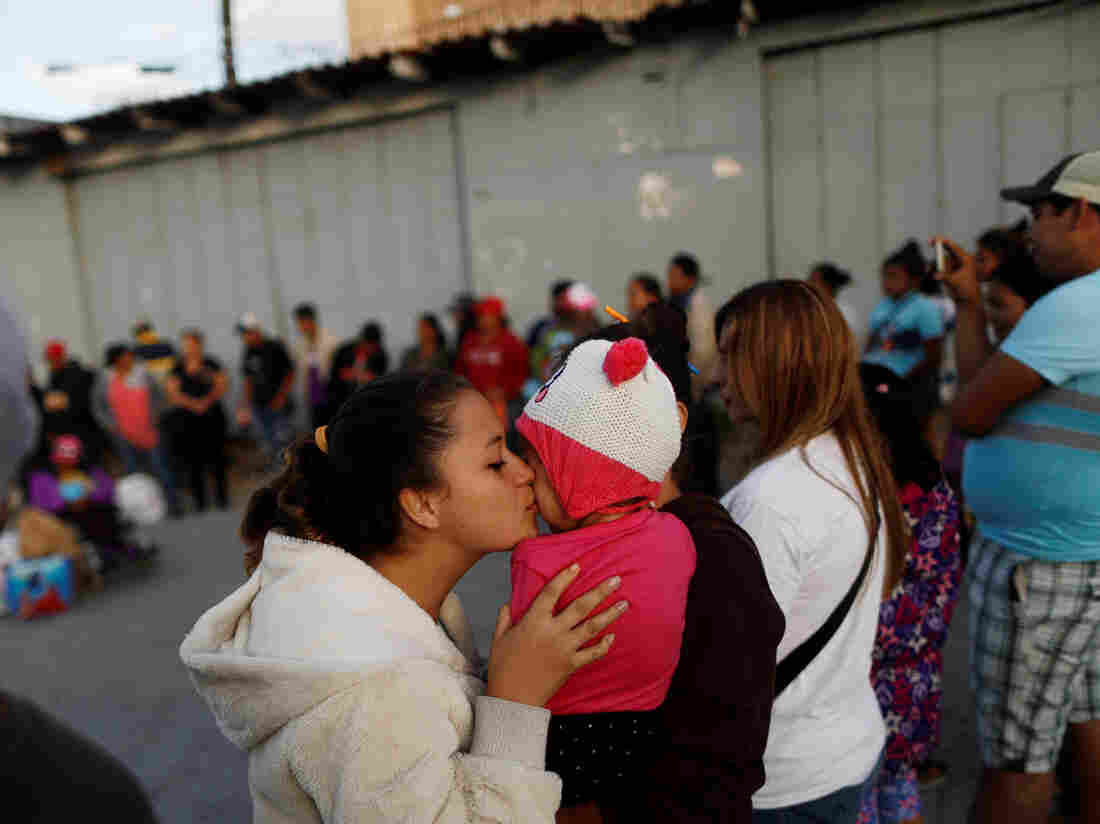 A member of a migrant caravan from Central America kisses a baby as they pray in preparation for an asylum request in the U.S., in Tijuana, Baja California state, Mexico. Edgard Garrido/REUTERS hide caption 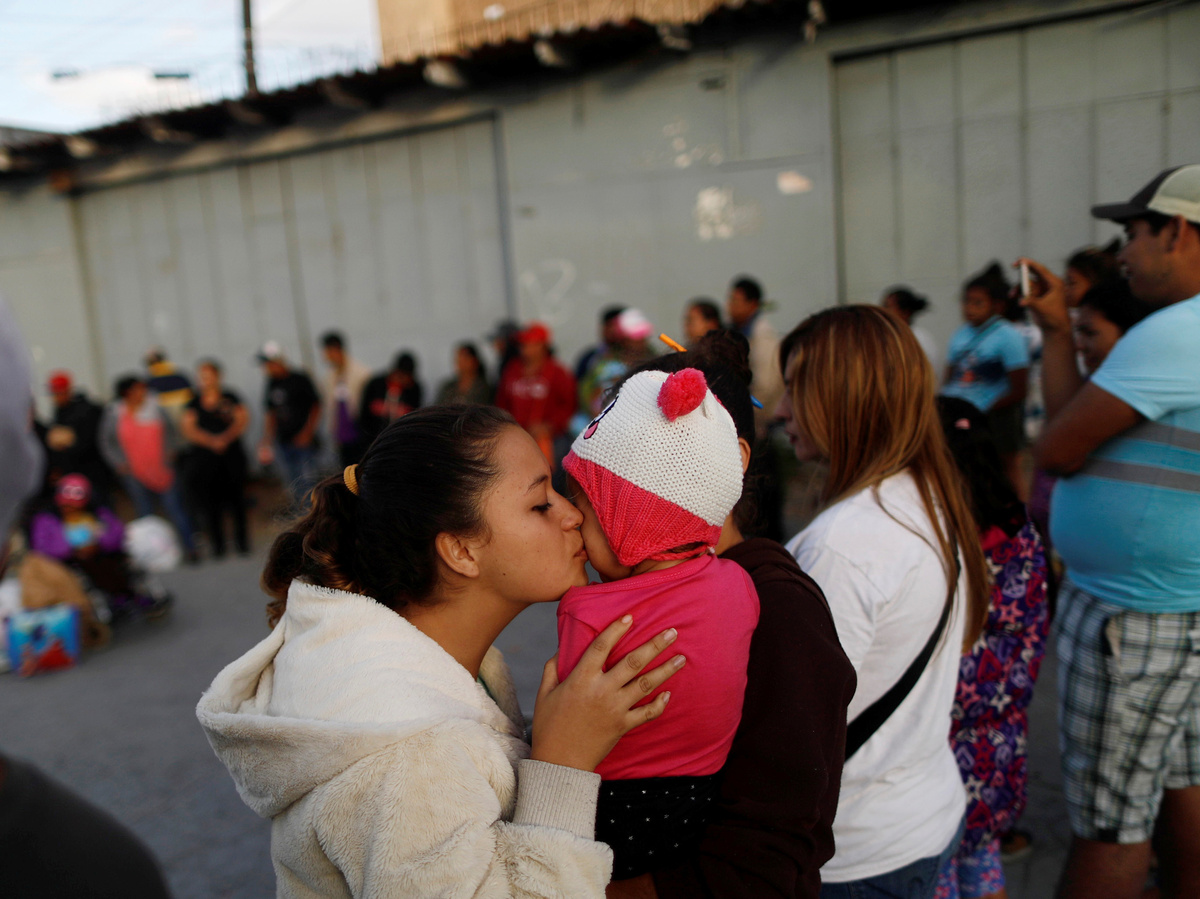 A member of a migrant caravan from Central America kisses a baby as they pray in preparation for an asylum request in the U.S., in Tijuana, Baja California state, Mexico.

A group of roughly 200 people, mostly Central Americans, has arrived at the U.S.-Mexico border seeking political asylum. Before heading to the port of entry in San Diego County, they were greeted by a group of supporters across a border fence in the U.S. holding welcome signs.

One person flew a kite above the border reading “Refugees Welcome Here.” Some supporters apparently climbed the border fence, under the watchful eyes of patrol agents.

But despite the chants and music straddling the border, the migrants are facing an uncertain future wherever they land. Many have decided not to seek to asylum in the U.S. after speaking with volunteer immigration lawyers, who have advised the migrants to be prepared for separation.

The weeks-long trek by this so-called caravan is an annual, organized trip. Most of the people are from Honduras and are fleeing the violence that erupted after the highly contested presidential elections in November. Many people are also from Guatemala and El Salvador, where gang violence is prolific.

This year’s journey, however has been the target of harsh political rhetoric and ire from President Trump. He points to the group of migrants as justification for increased security, namely a border wall.

Trump has also called on the Mexican government to stop the caravan before it reaches the border. The demands come amid increased tension between the two countries as they seek to hammer out a revised North American Free Trade Agreement. Trump has gone as far as to threaten NAFTA, calling it Mexico’s “cash cow,” if the country did not act to slow traveling migrants.

A number of migrants seeking asylum Sunday decided to change course along their journey, so much so that it momentarily stalled the trip. Central Americans face an uphill battle when seeking asylum in the U.S. NPR’s Eyder Peralta reports that in 2010, 9 out of 10 Hondurans and Salvadorans are denied asylum, as well as 8 out of 10 Guatemalans.

The Department of Homeland’s Security says it is monitoring the situation, and encourages the migrants to seek shelter from violence in the first safe country they encounter, including Mexico. In a statement, Secretary of Homeland Security Kirstjen Nielsen said:

“If members of the ‘caravan’ enter the country illegally, they will be referred for prosecution for illegal entry in accordance with existing law. For those seeking asylum, all individuals may be detained while their claims are adjudicated efficiently and expeditiously, and those found not to have a claim will be promptly removed from the United States.”

Among the people planning to apply for asylum Sunday are many women and children. The U.S. has been reportedly been separating children and families to deter illegal immigration practices.

Migrants seeking asylum in the U.S. are often detained, then released while their asylum claims is processed. This procedure has been dubbed by critics of immigration as “catch and release.”

If members of the caravan are detained and released, some activists across the country are offering a place to stay while the migrants await a decision on their asylum. This includes Grace Aheron with the network Showing Up For Racial Justice. She shares a house with four other members in Charlottesville, Va., and felt compelled to help.

“Many of us have connections to immigration,” Aheron says. “It felt like the least we could do … to give these people that are coming from such incredibly intense and violent situations a soft place to land in the U.S.”

Some have stepped forward to house people if they are released.