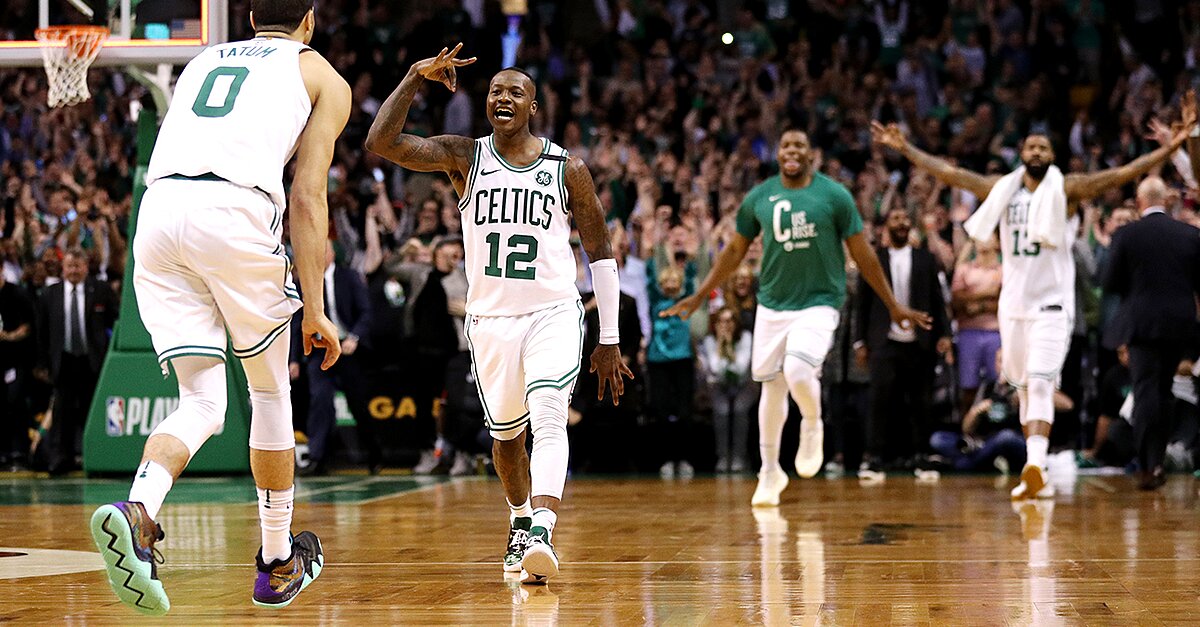 The Celtics are headed back to the Eastern Conference finals. Boston held off the precocious Sixers on Wednesday, winning Game 5, 114–112, and clinching their second-round series in the process. Philly battled back from a nine-point halftime deficit to take a lead late in the fourth, but the 76ers couldn’t hold on in the final two minutes. J.J. Redick missed a potential dagger three and Joel Embiid missed a game-tying shot as the game wound down, while Jayson Tatum hit a key go-ahead shot before Boston iced the game at the free-throw line.

Tatum was sensational again for the Celtics. He scored 25 points, while Jaylen Brown scored 24 of his own. The pace of Wednesday’s game was slightly faster than those preceding it. Both teams were executing well offensively for most of the night, which lent itself to a back-and-forth affair. Boston was shooting well all night until the offense bogged down a little bit in the fourth. But the Celtics found clutch baskets when necessary. Tatum hit two big shots at the rim down the stretch, and he also found Al Horford on an alley-oop when it looked like the Sixers had a chance to pull away.

Philly will be kicking itself for missing two great looks in the waning moments. With just over a minute left, Redick bricked a wide-open three from the left wing, a shot that would have given the Sixers a five-point lead. With just over 10 seconds to go, Embiid missed a point-blank attempt at the rim, and also couldn’t connect on a tip-in on the ensuing offensive rebound. If either of those shots go, these teams could easily be headed back south for a Game 6.

Embiid acquitted himself well Wednesday. He scored 27 points and connected on nine of his 14 shots inside the three-point line. Embiid settled for a couple threes, but he played 39 intense minutes, and he carried the offense during an important stretch in the third quarter. Ben Simmons again failed to reach the heights he did during his spectacular first round, but he looked somewhat closer to the dominant Simmons in Game 5. He was aggressive at times looking for his shot in the paint, but looked hesitant for short stretches.

The offseason plan will have some obvious benchmarks for the 76ers. Embiid could afford to improve his conditioning, as there were times during the second round in which the big man looked like he couldn’t give full juice on defense. Embiid also has to improve his outside shooting if he wants to float on the perimeter as often as he does. Otherwise, he needs to continue fine-tuning his post moves to prepare for technically proficient defenders like Horford and Aron Baynes. For Simmons, it’s as simple and complicated as adding an outside shot. The Celtics slowed down the rookie for much of this series, and he needs some semblance of a shot to counter defenses.

As for the Celtics, their magical run is defying all odds. A couple bounces go the other way over the last five games and Boston may be facing a deficit instead of celebrating a series victory. Still, immense credit is due to Brad Stevens and the whole organization for their effort against the 76ers. Players like Tatum, Brown and Terry Rozier grew up before our eyes, putting together performances well beyond their years. Horford cemented his status as the league’s most underrated All-Star, providing timely offense while handcuffing the league’s most talented center on defense. Stevens drew up great play after great play, ensuring that Boston would secure this hard-fought series win.

Boston’s reward for finishing off Philadelphia is a matchup with LeBron James. The King is putting together a masterful postseason, and he looks to be in full control of his vast powers after a sweep of the Raptors. It should be a fascinating series, with Stevens matching wits with James. Boston was a victim of James’s as he reached his seventh straight Finals last year, but both squads will enter this matchup looking a lot different for the rematch.

We won’t have to wait too long to see which team’s re-tooling paid off. Game 1 is Sunday.