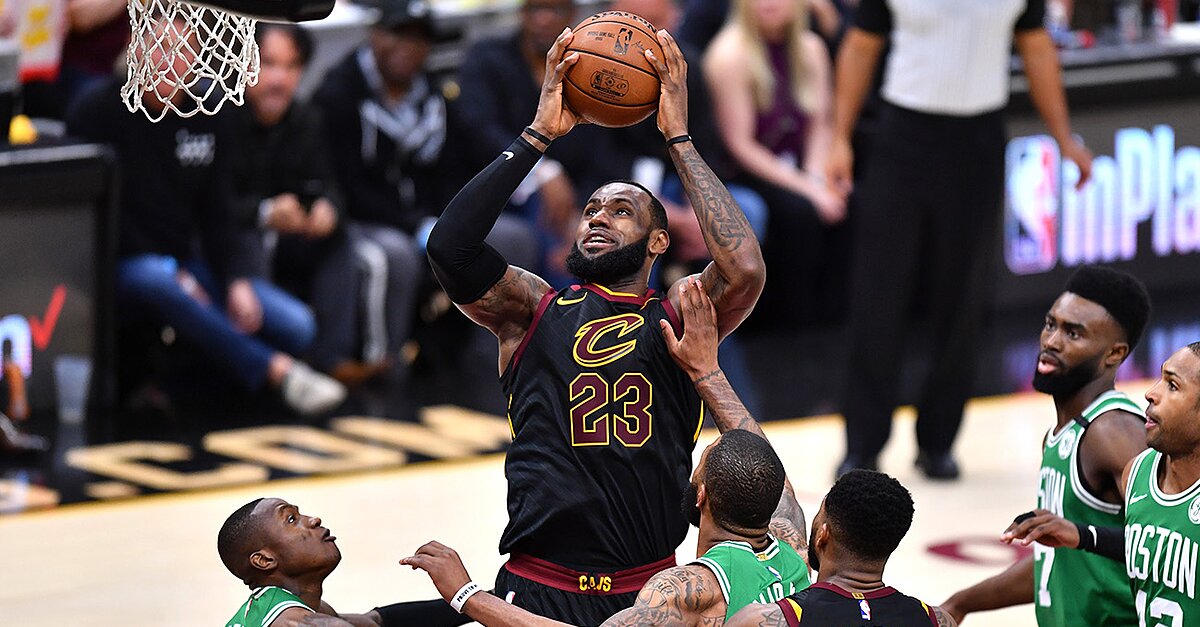 If you’re a lover of clichés, the Eastern Conference Finals haven’t started yet. The Cavs held serve at home with a 111-102 win Monday night, evening up their best-of-seven series with the Celtics 2–2. LeBron James scored 44 points, and Kyle Korver played one of his more memorable games in a Cleveland uniform, scoring 14 points while picking up three impressive blocks.

The Cavs did their best work inside the paint Monday. In very broad terms, the success of LeBron’s second-era Cleveland teams has often risen and fallen with the team’s three-point shooting. When the Cavs don’t connect from the outside, they lose; and when they catch fire, they look like one of the best teams in the NBA. Game 4 was different. Cleveland made a concerted effort to work its way inside, and that all started with James.

LeBron took 28 shots on Monday, but only four came from behind the arc. (He took 16 shots in the paint alone, which would have been the second-most field goal attempts by anyone in the game.) James did his best work when switched on to one of the Celtics’ smaller players. Terry Rozier was picked on repeatedly, as Bron seemingly got whatever shot he wanted when he isolated on or posted up the point guard. Foul trouble on Marcus Morris helped the Cavs seek out favorable switches, and James repeatedly barreled his way into the paint for scores. His focus on the rim set the tone for how Cleveland would attack.

The easy baskets eventually opened up opportunities for Cleveland’s other scorers. As James dominated, the Celtics didn’t quite fully commit to sending doubles. When defenders did slightly cheat off other players on the floor, the likes of Korver and J.R. Smith took advantage, combining for five threes. The Cavs’ “others” didn’t have huge games, but they made timely cuts off the ball, and didn’t completely cough up the lead at the top of the fourth, allowing James an important rest for the stretch run.

Cleveland ended up with 50 points in the paint Monday, 10 more than it was averaging in the series entering Game 4. The Cavs also shot only 23 times from three, where they shot around 32 times per game from the regular season. Finding less difficult buckets allowed Cleveland to shoot 50.6% from the field against a rugged Boston defense.

Conversely, the Celtics had a maddening game on offense. Jaylen Brown and Jayson Tatum picked up their level of play in the second half, but they looked every bit their youth in the first 24 minutes. Brown and Tatum each missed easy dunks, as Boston in general was a mess shooting at the rim. The C’s got some decent looks, but their penchant for missing in the restricted area allowed Cleveland to build a lead that was ultimately too big. And Rozier couldn’t quite make up for his defensive struggles, shooting perhaps a bit too early and often on too many occasions.

Coach Ty Lue also deserves credit for sticking with Tristan Thompson after he couldn’t make a huge impact in Boston. The Cavs have not completely cleaned up their defense, but Thompson allows them to match up better with the Celtics. His insertion into the lineup seems to be making life harder for Al Horford, who struggled for the second straight game shooting five-of-13 in Game 4, scoring only 15 points in a game his offense was desperately needed.

The silver lining for Boston is it likely won’t shoot as poorly at the rim moving forward. Game 4 was within single digits for much of the fourth quarter, and the Celtics remained competitive despite facing a couple big deficits.

James, as he often is, was the difference Monday. His commitment to working inside benefitted Cleveland’s offense greatly. Whether this formula is replicable for the Cavs remains to be seen, particularly for a team used to doing its best work from the outside. As the series shifts back to Boston, the Celtics are left where much of the NBA has been for the last 15 years—finding an answer for LeBron.