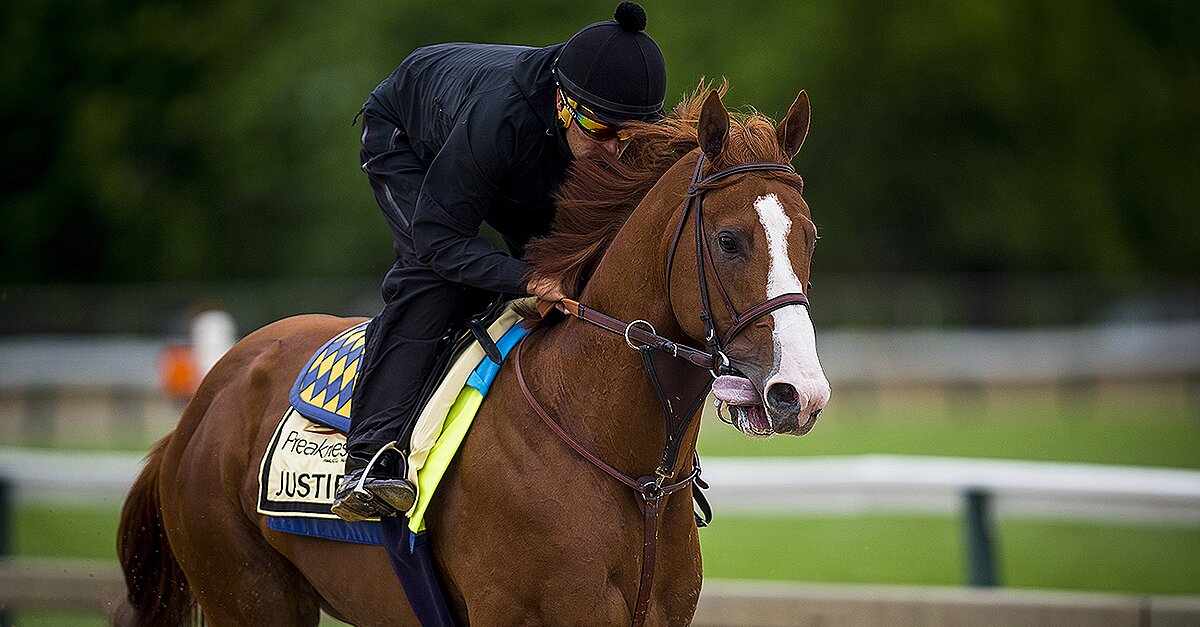 BALTIMORE – Shortly past eight on the morning after the May 5 Kentucky Derby, winning trainer Bob Baffert walked winning horse Justify out the west end of Barn 33 on the Churchill Downs backstretch. It was a clear, sunny morning, in spectacular contrast to the previous day’s deluge. There was no practical goal in this exercise, except as a photo op, and what Baffert likes to call “sharing the horse.” Other trainers have done this with popular and successful racehorses, and Baffert did it frequently with 2015 Triple Crown champion American Pharoah, most notably on the morning after the Belmont Stakes and, two months later, after Pharoah’s upset loss in the Travers at Saratoga. On the morning after that late August race, dozens of fans clustered beneath century-old elms and oaks and stood next to the most famous American thoroughbred in nearly four decades. It was nice. And it was nice two weeks ago, as well, when a somewhat smaller crowd watched as Justify walked into slanting sunlight that turned his chestnut coat a breathtaking cooper.

It was all very harmless, until it wasn’t. Because this is racing and therefore a touch of controversy–sometimes valid, often not–attends nearly every act.

On Saturday morning at crumbling old Pimlico Race Track, and most likely on another sloppy track, Justify will try to win the Preakness and align himself for a Triple Crown attempt on June 9 in the Belmont Stakes. He appears to be a ferociously talented horse, despite having raced only four times in his life, and all in the 77 days leading up to the Kentucky Derby. Justify is a towering 1-2 morning line favorite, the lowest opening number since Big Brown in 2008 (he won, easily) and likely to go way lower on Saturday. His journey from Louisville to Baltimore was accompanied by a subplot that is somewhere between negligible (possible) and seismic (not likely), but instructive of racing, social media and Things These Days.

On that post-Derby Sunday morning, Justify remained in that stunning sunlight for just a couple minutes, as Baffert turned the colt to face cameras and fans at various angles.

Justify was not entirely a willing partner in the exercise; at one point his left hind leg either buckled or Justify purposely refused to apply weight to the foot or leg, causing an awkward listing. (Full disclosure: I did not see the problem with Justify’s left rear in real time; I noticed only that Justify seemed uncomfortable or resistant to participate in the show.) In short order, Baffert walked Justify back into the barn a bit sooner than fans and photographers might have expected. There was a reason for this, which Baffert did not mention–and may not have known about–in a roughly 20-minute press conference after returning Justify to his stall.

Shortly after the photo op, several news outlets and individuals (seemingly everyone present had been filming or shooting) posted the short video of Justify and very quickly after that, viewers began expressing concern over what they were seeing. One of the outlets that posted a video was longtime turf writer Ray Paulick’s website. Paulick soon began getting calls and texts, including two from trainers, one of whom said Justify was “dead lame,” according to Paulick. Full stop here. The word ”lame” also popped up relentlessly on comment sections on other websites. It’s a strong word, but technically means only, “unable to walk normally.” Moving on.

At home in California, veterinarian Ryan Carpenter, who often treats Baffert’s horses, including Justify, but was not in Kentucky for the Derby or aftermath, watched the video. “I had to watch it, because I got a million text messages telling me to watch it,” says Carpenter. “Watching the video, it was pretty obvious that something was bothering him.” Carpenter also added, “Of course if it had been something major or really serious, relating to this race, it would have been apparent in the first hour or two after the race.”

Working on the fly (presumably), Baffert told Paulick (first) and others (soon afterward) that Justify had incurred “scratches” on the skin below the pastern on his left hind ankle, a common occurrence in horses that race or train in muddy conditions. Things heated up from there. People for the Ethical Treatment of Animals (PETA), a deeply polarizing group in the racing industry, which is enamored of its own voice at all times, called for an “independent examination” of Justify and on Tuesday, three days after the Derby, the Kentucky Horse Racing Commission sent a veterinarian to examine Justify. Baffert says he did not have to allow the examination. “But I said, ‘Sure, come on in and look at him.’”

After that examination, the state vet deemed Justify “comfortable and quite happy,” although suffering from a bruise in his left hind heel. Baffert’s staff had already determined this. That bruise, another common condition in racehorses, was likely incurred while racing on the wet surface in the Derby, because wet tracks have less cushion than a dry, sandy track. The bruise, and not scratches, was apparently the cause of Justify’s post-Derby discomfort, discovered and exacerbated when Justify walked from the soft loam inside the barn to the gravel outside.

Carpenter, the California vet, says, “You get a much harder surface on a wet track. Bruises are more common. And Justify, it probably wasn’t until he walked on the gravel Sunday that the bruise pinched him.” (Think of a human with a foot bruise walking from the grass in his backyard and then across a pile of acorns.)

The incident left Baffert frustrated. “No good deed goes unpunished,” he said Wednesday evening after the Preakness post position draw. “I like to share the horse with people. That morning, I almost didn’t bring him out, because of the gravel.” But Baffert also did not dispute that Justify was briefly compromised. “When I turned him, the left hind gave out on him,” said Baffert. “It did give out. So we knew there was an issue. I just didn’t know there was a controversy until I got to the airport. Bad news travels fast.” Justify was fitted for a few days with a three-quarter shoe, which takes pressure off the sore spot, and was galloping at Churchill Downs five days after the Derby. He is now wearing a full shoe, and appears to be moving easily.

The unfolding of the mini-controversy surrounding the scratches-turned-bruise and the lame-not-lame argument shines a light on the always simmering subculture of anti-racing activism. There is a vocal populace that despises thoroughbred racing as animal cruelty. Baffert makes for an easy target because he is successful, visible and because seven horses in his care at Hollywood Park died from November 2011 to March 2013, and despite the fact that an extensive investigation by the California Horse Racing Board found no evidence of wrongdoing on Baffert’s part. (In my interviews with Baffert on this subject, at the time, he expressed sadness at the loss of his horses and frustration at being unable to find a cause for their deaths.)

Back on the racetrack, Justify will face just seven rivals in the Preakness, the same number that American Pharoah dominated in 2015, which was the smallest field since 2000. The only logical challenger is Derby runner-up Good Magic, last year’s two-year-old champion. Good Magic chased Justify to the line in the Derby, but was soundly beaten by 2 ½ lengths. There was little in that performance to suggest that Good Magic can reverse that outcome. It’s more intriguing to ruminate on Justify. In the Derby, he became the first horse in 137 years to win the roses without having raced as a two-year-old. But his schedule has been remarkably hurried: The Preakness will be his fifth career race and all within just 91 days. He has not delivered a poor performance and while his victories have come easily, he is due for some sort of misfire. Or maybe he is not. “He looks like a big, strong horse to me,” said Hall of Fame Trainer D. Wayne Lukas, who, like Baffert, has won the Preakness six times and will send out two longshots to challenge. “I think if Bob’s horse runs his race, we’re all running for second.”

On Thursday morning, during a break in the rain showers that are expected to fall on Pimlico for much of the next several days, Justify galloped just more than a lap around the track. “He loves the slop,” exercise rider Humberto Gomez shouted at Baffert as he walked Justify off the track. It’s likely that the Pimlico surface will be wet on Saturday, which is good news in that Justify runs fast in slop, and bad news in that a wet track with a hard base could bother his still-healing bruise. Most likely he will be running for history in New York, three weeks hence.