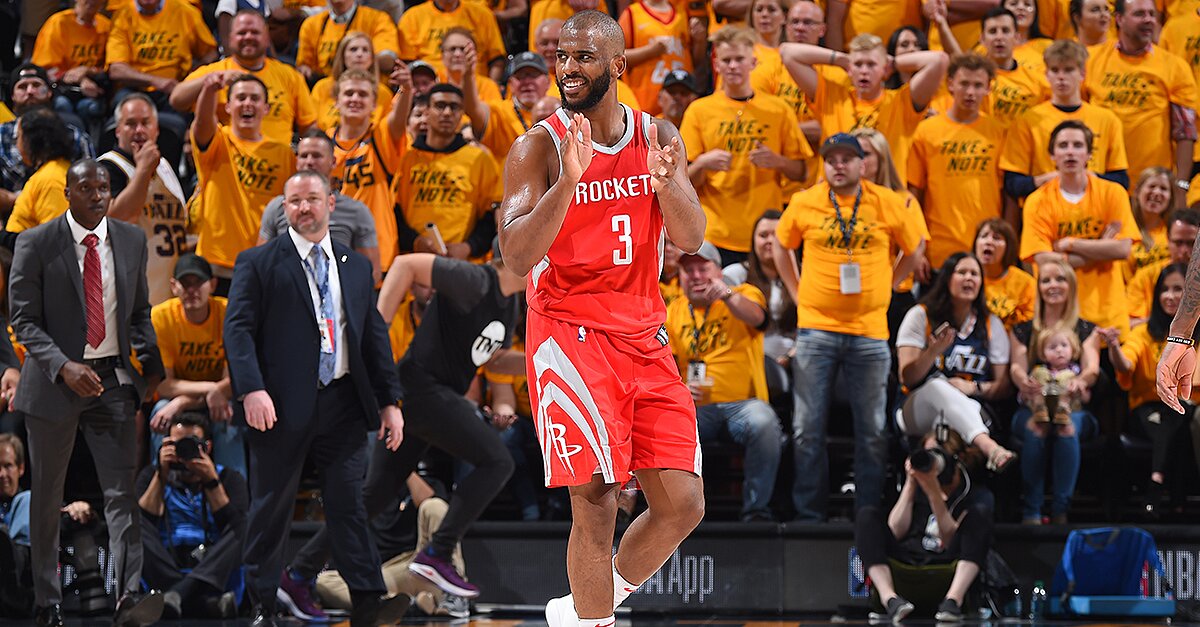 Before the Warriors blew a 3-1 lead in the 2016 NBA Finals, spawning a million memes and punchlines, Chris Paul and the Clippers squandered the same lead over the Rockets in the second round of the 2015 playoffs. Paul, who left L.A. for Houston last summer, hasn’t forgotten that fact now that he once again finds himself one win away from his first trip to the conference finals.

The Rockets defeated the Jazz 100-87 in Game 4 at the Vivint Smart Home Arena on Sunday, claiming the notorious 3-1 lead in the Western Conference semifinal series thanks to a game-high 27 points, 12 rebounds and six assists from Paul.

After the win, Paul referenced L.A.’s 2015 meltdown in a walk-off interview with TNT.

If the Rockets win Game 5 on Tuesday at Houston’s Toyota Center, the victory would represent a milestone for Paul that’s been more than a decade in the making. The nine-time All-Star point guard turned 33 on Sunday and has appeared in the playoffs for 10 straight seasons.

Despite enjoying a career that will surely land him in the Hall of Fame on the first ballot, Paul has never advanced out of the second round. He and Blake Griffin came close in both 2014 and 2015 with the Clippers, but they couldn’t close out the Thunder and Rockets, respectively. After Griffin’s trade in February, Clippers coach Doc Rivers said the 2014 loss was the “beginning of the end” for the Paul/Griffin Clippers and called L.A.’s 2015 collapse a “debacle.”

Asked to elaborate on the 3-1 lead’s significance given that history during their post-game press conference, Paul and Harden both demurred.

Harden chimed in: “That’s over with. He not even thinking about that honestly. We’ve got a game on Tuesday and we’re going to do whatever it takes to close it out. I don’t know what he’s thinking. I know he’s not thinking that. As a team, we’re going to make sure we play our butt off and win the game.”

While Utah has put up a fight in this series after an electric first-round victory over Oklahoma City, a comeback would be stunning. Paul’s arrival in Houston has paid clear dividends. In last year’s playoffs, Harden and the Rockets struggled to adapt offensively when the Spurs concentrated their defensive efforts on the three-point line and the rim.

When the Jazz have tried a similar approach this year, dropping center Rudy Gobert back into the paint, Paul has shot aggressively from the mid-range, an area that the “Morey-Ball” Rockets have regularly ignored in the past. In Game 3, Paul hit five two-point field goals from between seven and 20 feet, referring to them as “lay-ups” afterward because Utah left him so open. In Game 4, he hit nine.

“That wasn’t a joke [about the mid-range shots being lay-ups],” Paul said. “If Gobert is going to be back [defensively], that’s where I’m going to shoot it.”

After posting a league-best 65 wins, Houston has often looked like a juggernaut during the postseason, compiling a 7-2 record and a league-best +9.3 point differential against Minnesota and Utah. The Rockets rank No. 2 in both offense and defense during the playoffs, and a long-awaited Western Conference Finals showdown with the Warriors, who lead the Pelicans 3-1, is in the offing.

“We’re not satisfied just being up 3-1,” Harden said. “We started training camp and the beginning of the season, this entire regular season, we didn’t just come this far to be up 3-1 in the semifinals. We have a long way to go.”