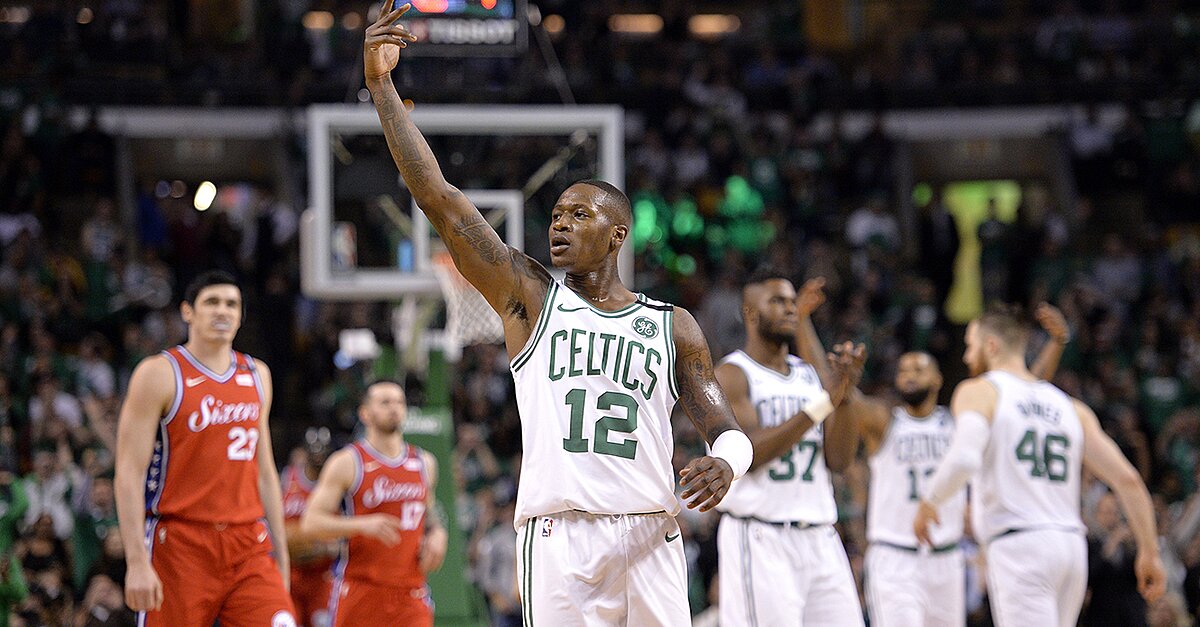 It’s hard to win a playoff game in 2018 when you make only five threes. It’s almost impossible to win a playoff game in 2018 when someone who started the season as a backup point guard makes more threes than your whole team. The 76ers were victims of both Monday, getting out-shot by the Celtics in Game 1 of the East semis, as Boston took a 1–0 lead in the series with a 117–101 win. Terry Rozier scored 29 points while shooting 7-of-9 from beyond the arc, while Philly looked lethargic in its first game in six days.

The pace of Monday’s game certainly favored the Celtics. The Sixers entered Round 2 playing the fastest brand of basketball in the postseason. Boston didn’t put up 117 points by running Philly off the floor. The Celtics executed incredibly well in the halfcourt, and found more consistent, open looks at the three-point line than their opponent.

Boston shot 17-of-36 from three, not dissimilar to the way the Sixers gashed the Heat from outside in the first round. The Celtics were certainly aided by some gutsy shot making, but Brett Brown’s defense also gave up too many clean looks. Philly looked a step slow on rotations Monday night, and its communication left a lot to be desired. Joel Embiid wasn’t at his most energetic trying to defend Boston’s bigs on the perimeter, and the 76ers seemed to underestimate the Celtics’ shooting prowess at times, giving a lot of space to guards.

On the other end of the court, the Sixers didn’t shoot as many threes as they are accustomed to. Philly made only five of its 26 attempts from outside after averaging 31.4 threes per game against Miami. Brad Stevens mentioned during the game broadcast that he was willing to let Embiid work in the post if it meant staying at home on shooters. The strategy seemed to pay off. Embiid himself took five threes, while snipers Dario Saric, Robert Covington and Ersan Ilyasova were denied their usual looks. Marco Bellinelli, who entered the night as the top bench scorer in the playoffs, only managed two three-point attempts and was a minus-23 in 28 minutes. The Celtics sold out on sticking with players on the perimeter, and Boston also had the bodies to fight over screens and deny open shots for shooters coming off of curls. Philly simply never looked crisp, and that can’t happen against arguably the most disciplined defensive team in the league.

It’s hard to imagine many games in this series will look like Game 1. Regression will help the Sixers and hurt the Celtics. Boston likely won’t shoot that well from three consistently, while Philly should eventually start to connect. Once that happens, the apparent gulf between these teams after one game should shrink considerably.

Something the Celtics can hope to recreate moving forward is keeping the pace low. The Sixers are at their best when they are playing fast and shooting early and often. Boston’s advantage is its halfcourt defense, and limiting the number of possessions also masks the Celtics’ medium-powered (at best) offense.

For all the talk of who isn’t on the court for Boston, multiple players have stepped up in the absence of others. Rozier may not shoot lights out from three every night, but he’s admirably filled in for Kyrie Irving. Jason Tatum played spectacularly Monday, scoring 28 points and creating a serious matchup problem for the Sixers’ defense. Al Horford was a swiss army knife, defending numerous positions and scoring 26 points on a hilariously efficient 10-of-12 shooting, adding seven rebounds and four assists for good measure.

The key to a Game 1 is always not to overreact. A more normal three-point performance from both sides Monday could have easily led to a Sixers win. As the series progresses, Boston can’t expect to dominate from the perimeter every night. But if the Celtics continue to slow the game down and guys like Rozier, Smart and Horford provide timely performances, the Sixers will have their hands full for as long as this series lasts.