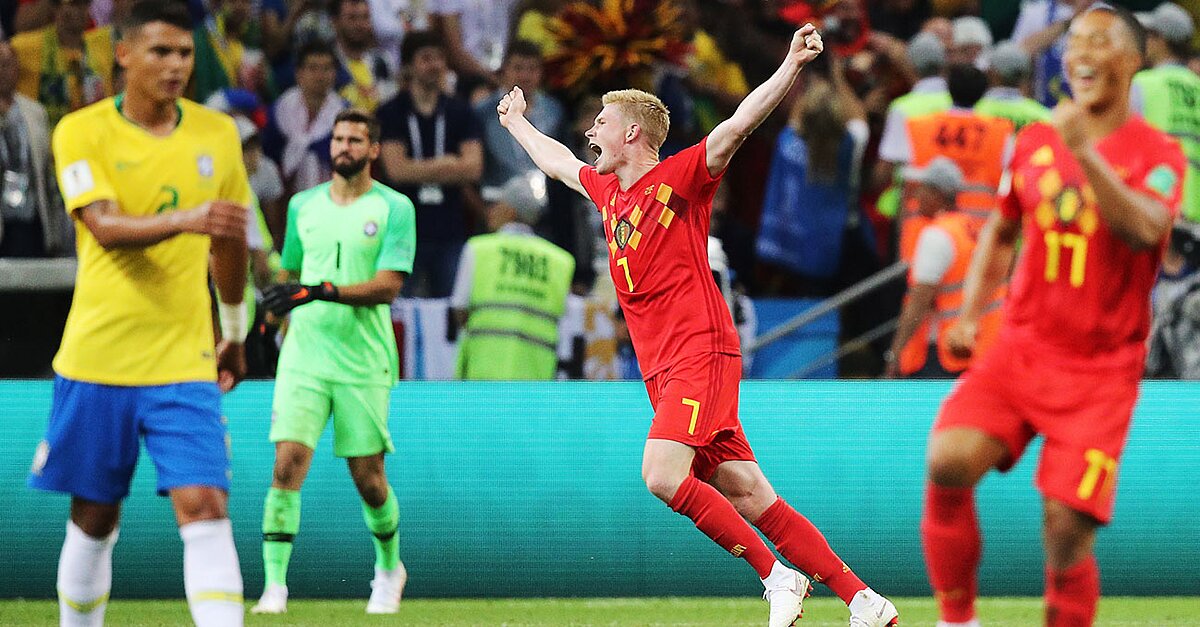 Belgium’s star trio was sensational in a belief-building win over Brazil, while France showed it can win in multiple ways after grinding out a comfortable triumph over Uruguay in the World Cup quarterfinals.

MOSCOW — In a pulsating, wildly entertaining game, Belgium eliminated Brazil from the World Cup with a 2-1 quarterfinal victory, while France took out an Edinson Cavani-less Uruguay 2-0 earlier on Friday to punch its ticket to the semifinals.

The two results set up a mouth-watering semifinal between bordering nations, while also ensuring that the winner of this World Cup will emerge from UEFA, with the remaining South American nations eliminated. France and Belgium will be joined by one of Russia-Croatia and one of England-Sweden in an all-European final four.

Here are my three thoughts on the day:

Kevin De Bruyne, Eden Hazard and Romelu Lukaku were fantastic, especially in the first half, in their deserved 2-1 victory to eliminate Brazil in Kazan. (Let’s give some credit too to goalkeeper Thibaut Courtois, who made a ridiculous save on Neymar’s shot late in the game.) But Belgium coach Roberto Martínez made the right move by shifting De Bruyne from the midfield up to the wing in this game and inserting Marouane Fellaini in his place in the midfield.

De Bruyne is such a smart player, and he influenced the Belgian attack even more from a more advanced position. The game-winning goal came off another full-speed counterattack, much like the one De Bruyne led late against Japan, but this time De Bruyne finished it with a laser of a shot into the corner. Once again, Lukaku had a big influence on the counter goal, doing terrific work to set it up. Lukaku has missed some chances in the last couple games, but he has also shown an impressive ability to influence goal-scoring plays in other ways.

Then there’s Hazard. You could make an instructional video reel tonight from Hazard’s pitch-perfect decision-making, his ability to calm things down on the ball on some occasions but then take dribbling risks on the ball on others.

Let’s raise a glass to Martínez, too. He recognized after the Japan game that he needed to make some changes to his lineup, and he made them. They were the right changes, the ones that gave his Belgium team a chance to fulfill all that potential we’ve seen in recent years and get a signature victory against Brazil. It doesn’t get any easier, now though.

• France showed it could win in a different way

One game after Kylian Mbappé shredded Argentina with his speed and skill, France couldn’t attack the same way against an Uruguayan team that was far more organized defensively than the tire fire that was Argentina. And while losing Edinson Cavani to injury was huge for Uruguay and had a major impact on the game—Luis Suárez didn’t touch the ball in the box even once—I still came away impressed with France’s ability to grind out a win through set pieces. That was a terrific connection between Antoine Griezmann, who did a little fake before his delivery, and the head of goal-scorer Raphaël Varane.

Another of my concerns about France has been that it’s too soft and not tough enough, which wasn’t the case Friday. N’Golo Kanté, in particular, was a rock for France once again vs Uruguay. The things that France didn’t show in the group stage have been shown in the knockout round games, and that’s a good sign for Les Bleus.

• Looking back on Neymar’s World Cup

First it was Mohamed Salah, then it was Lionel Messi, then Cristiano Ronaldo. And now Neymar is out of the World Cup. The biggest individual stars entering the tournament are all done before the semifinal stage. So how will we look back at Neymar’s World Cup 2018?

He had some fantastic moments of skill, including his goal against Costa Rica and the entire scoring play against Mexico, from his backheel to Willian to his run around the defense to his finish in front of goal. But Neymar’s tournament will also be remembered for his embarrassing displays of over-the-top playacting from the very first game, from barrel rolls against Switzerland, to his possessed-by-the-devil writhing against Mexico, to his horrible attempt to draw a penalty against Fellaini in the second half. Replays showed that nobody touched Neymar, who fell down on his own, but for some reason no VAR took place and no yellow card was given (one would have ruled Neymar out on a yellow-card suspension for the following game, had Brazil advanced).

In Neymar’s defense, he set up Philippe Coutinho for what easily could have been a tying goal late, and he nearly was the hero in stoppage time, only to be denied by Courtois in a moment that could have redefined his World Cup entirely.