Other than a brief scare in the 18th minute, this was a result that was never in doubt as Belgium completely outclassed their opponents. Romelu Lukaku and Eden Hazard bagged a brace each giving their side a comfortable margin of victory, and allowing Lukaku to draw level with Cristiano Ronaldo in the running for the Golden Boot.

Belgium endured a real battle with Panama in their first fixture, eventually getting the breakthrough in the 47th minute and going on to run out comfortable 3-0 winners to put them in good spirits for this game.

It was late heartbreak for Tunisia though, as they looked certain to hold England to a point before Harry Kane’s late winner. They only managed an equaliser via a fortuitous penalty though and rarely offered a serious threat to Jordan Pickford’s goal other than that.

It was an early role for the VAR team as Belgium started with a much higher intensity than in their first game. Eden Hazard was brought down right on the edge of the area inside the first five minutes, with the referee pointing to the spot.

The Tunisians protested that the infraction took place outside of the box, but the VAR team backed the referee’s decision and the penalty was awarded. Hazard subsequently made no mistake from the spot, and left the keeper rooted as he gave his side an early lead.

Hazard had an excellent chance to make it 2-0 in the 12th minute after Thomas Meunier found him in space around the penalty spot. The Chelsea winger should really have taken the chance, but scuffed his shot into the ground.

Three minutes later, Belgium were on the break once again with Dries Mertens feeding Romelu Lukaku through the centre. The powerful striker who is on great form after a brace in the first game, made no mistake, slotting comfortably past the keeper.

The Eagles of Carthage were determined not to call time on their World Cup, winning a free kick almost straight from the kickoff. Key man Wahbi Khazri delivered a teasing ball into the Belgium area and Dylan Bronn got on the end of it to reduce the deficit inside 17 minutes. 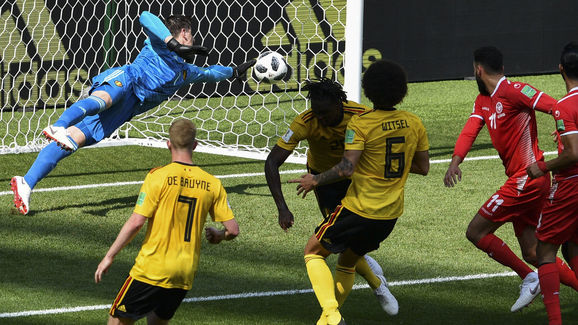 Belgium responded again in turn, tearing through the Tunisian defence during an excellent opening exchange between the two sides, with Yannick Carrasco forcing a great save from Farouk Ben Mustapha. It was heartbreak for Tunisia’s goal hero Bronn as he was struck with injury and had to be replaced with the game tightly poised and still early into the first half.

Tunisia didn’t drop off as they continued to press for an equaliser, forcing Belgium deeper into their own half. But shortly before halftime, they suffered another setback as Syam Ben Youssef also picked up an injury and had to be replaced, taking two of their first choice back four out of the game.

Lukaku looked to wrap it up for his side deep into injury time in the first half, he came just inches away from Kevin De Bruyne’s cross on a quick break for Belgium. But moments later the striker was on hand once again latching onto Meunier’s through ball for a neat finish past Mustapha, putting his side 3-1 up going into the break.

Belgium left no doubt about the result early in the second half as Toby Alderweireld picked out the run of Hazard who brought the ball down and danced past the keeper to grab his second and his countries fourth of the afternoon.

Manager Roberto Martinez moved to rest some of his danger men as Lukaku made way for Marouane Fellaini around the hour mark with Belgium already as good as through.

Credit to Tunisia who didn’t let the game end as a contest, continuing to try their fortunes despite the compounding margin of victory. The game didn’t really look in doubt though, with Belgium removing their other goal hero Hazard to rest him for the upcoming England fixture.

Michy Batshuayi, the man who replaced Hazard, had the opportunity to replicate his captain when he skipped past an onrushing Mustapha, but the striker got no power behind his shot allowing Tunisia to get back and clear the ball off the line.

Batshuayi then scuffed an even greater chance to get on the scoresheet, he was Johnny-on-the-spot as Mustapha spilt Carrasco’s shot but he cannoned his golden chance against the crossbar.

Mustapha was on hand once again to frustrate the Chelsea striker, making an excellent save as Batshuayi couldn’t believe he hadn’t found the back of the net in a frantic few minutes for him.

Batshuayi eventually got the reward for his efforts in the 90th minute, rounding over a resounding victory for the Red Devils. Khazri had the final say in this game with a late consolation for Tunisia, finishing off the seven-goal thriller.

The Eagles of Carthage deserved more out of this World Cup really for two impressive performances in their opening two games. Despite the scoreline they were never really out of this one, they created plenty of problems for Belgium but in the end, it was just a matter of quality.

There’ll be a few things to take forwards for Martinez, particularly the goals they conceded and a concern over Lukaku who picked up a knock in this game. For now, though it was an excellent result for Belgium who are starting to look like the real danger men in this tournament, with so many of the favourites suffering underwhelming starts.