Belgian football analyst Aad De Mos has claimed that Anderlecht midfielder Leander Dendoncker won’t end up at Chelsea this summer, and that the likes of Crystal Palace or Everton are more likely destinations.

As relayed by SportsWitness, the Belgian stated that the 23-year-old will not be making a move to a ‘top’ Premier League club when the transfer window opens.

Dendoncker, who can be employed as either a central midfielder or defender has once again impressed for Anderlecht this season and it is no secret that he is keen on a move to the Premier League.

When asked about the potential future of Dendoncker, De Mos said: ”It will not be at the top. He won’t go to Chelsea, rather to a club like Crystal Palace or Everton.

“It is important to keep that pressure away. At one point, a transfer seemed more important than his game, which he suffered from. In the past few weeks he is better.”

It seems that Anderlecht are keen for Dendoncker – who has also been linked with Europa League finalists Atletico Madrid – not to get distracted by the continuous rumours regarding his future and are hoping that the pressure of impressing potential suitors does not provide too much pressure. 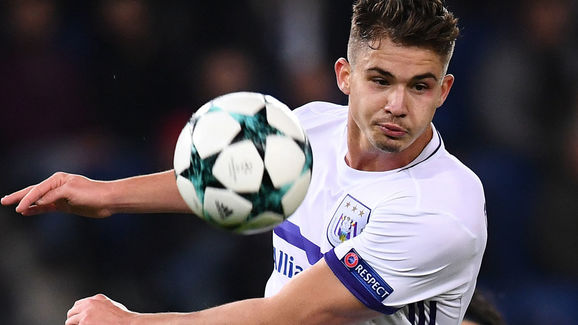 The Belgian has played in all six of Anderlecht’s Jupiler League fixtures thus far and has scored one goal. He will be hoping that he can impress not only Premier League clubs, but also those involved with the national side.

He has only made four appearances for the national side and will be in with an outside chance of making the star studded Belgium squad for this summer’s World Cup in Russia.

He has only made four appearances for the national side and will be in with an outside chance of making the star studded Belgium squad for this summer’s World Cup in Russia.