Another season passes in which Bayern Munich have conquered all before them in domestic terms, with the Bundesliga title wrapped up last month and a DFB Cup final on the horizon. However, the Bavarians have once again fallen just short of European glory.

Bayern had a potential blow to their stability in September when Carlo Ancelotti was sacked as manager, just a month into the campaign. Following a 3-0 defeat by PSG in the Champions League group stage, the Bayern board decided to part ways with the Italian.

Former defender Willy Sagnol took temporary charge of the side, replacing Ancelotti, who had won the Bundesliga title in the previous season after taking over from Pep Guardiola at the Allianz Arena in 2016.

It was an unusually short-lived managerial period at a club which is not known for being rash or impulsive in taking major decisions, but rather for their meticulous and well-organised structuring of business.

Jupp Heynckes returned to the club in October for a fourth stint to take charge until the end of the season. The German had most recently led Bayern from 2011 to 2013, winning a league, cup and Champions League treble during the final season in that spell.

Guardiola replaced Heynckes that time, and the new philosophical approach and revolutionary waves of footballing innovation which Guardiola sent through an already successful Bayern side should be followed as the blueprint in replacing Heynckes once again.

Heynckes will again step down from his post at the end of the season, and Eintracht Frankfurt manager Niko Kovac, who leads his current side into the DFB Cup final against Bayern this month, will take the reins at the Allianz from next season.

Succeeding a successful club great in Heynckes, who has restored stability and a winning mentality to a Bayern side who had been suffering a lack of direction and inconsistent performance levels prior to his return, will once again prove a difficult task for the incoming boss.

Pep Guardiola previously benefitted in doing so from a fresh approach, one which sought to develop the technical abilities and footballing philosophy of a side who had already conquered all before them under Heynckes.

Guardiola’s approach was not only to continue the good work and the style which the German had previously imprinted on his side, but to impose his own brand of passing, movement, pressing and precision on his new side, following his departure from Barcelona.

Standing still, after all, is not progress. Bayern have set unprecedented standards of remaining the dominant force in German football, and the maintenance of that legacy demands not only continuity, but also change.

This season’s Bundesliga triumph marks Bayern’s sixth successive retention of their domestic crown. Currently a whopping 24 points clear of second-placed Schalke in the table, their dominance over their rivals is as clear as ever, and the foundations are laid for their supremacy to continue.

Ancelotti was able to ride the wave of this pre-set authority and guide Bayern to another title victory during his first season in charge, but, despite his undoubtedly world class coaching skills, perhaps suffered during the short-lived spell of his second season in charge from a lack of fresh ideas.

Kovac will arrive in Bavaria this summer to take the reins of a side still comfortably on top. As Ancelotti learned, however, comfort is not always the way forward.

Bayern’s elimination from the Champions League at the semi-final stage to Real Madrid this season provided early evidence of some fundamental cracks which are already beginning to appear in need of rectification ahead of next season. 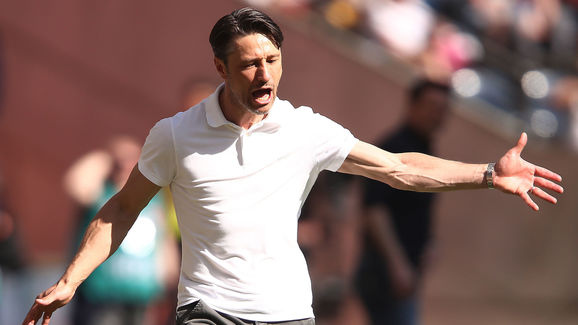 Soft defensive errors and a lack of ruthlessness and a clinical edge in offensive terms cost Bayern in a tie which they had largely dominated over the two legs against Madrid. Had Heynckes’ side held their nerve and stood firm at the back, and had Robert Lewandowski, Thomas Muller and co taken their chances, it would be Bayern facing Liverpool in this month’s final.

For such an experienced side, Bayern displayed a fundamental succession of naivety in that tie which cost them the result and a place in the Kiev showpiece which they arguably deserved for their performance.

It is those kinds of self-inflicted shortcomings which must be eradicated under Kovac if the club are to continue to build and move forward in the wake of another Heynckes phase next term.

The Croatian tactician must set about rediscovering the kind of ruthlessness and an uncompromised winning attitude in this Bayern side which saw Heynckes’ team dismantle Barcelona with a 7-0 aggregate victory in the Champions League semi-final en route to winning the competition in 2013.

In the current Bayern squad, it is less clear as to where can be strengthened in terms of personnel. The Bavarians were, after all, dominant in possession and chance creation against a Madrid side who are now on course to retain their Champions League crown for a third successive season.

Therefore, it is arguably Bayern’s tactical direction and discipline which requires the most work in order to regain the serial winner status which Madrid are exhibiting in Europe of late.

Kovac’s guiding of Frankfurt to seventh in the Bundesliga table and to the DFB Cup final against his next club this season are clear evidence of the incoming Bayern boss’ ability to maximise the potential of his side and get the best possible performances out of his players.

Frankfurt have displayed clear progression this term from having finished 14th in the league last season. Kovac’s ability to take a team further and build upon the foundations already in place could be crucial to Bayern’s success ahead of the next campaign.

Bayern are in need of a fresh approach next season to follow on from Heynckes’ restoration of stability and retention of dominance at the Allianz this term.

Change can breed progress, and progress is the road to success. Kovac’s arrival could just breathe fresh impetus into this Bayern side and take the German giants to another level.