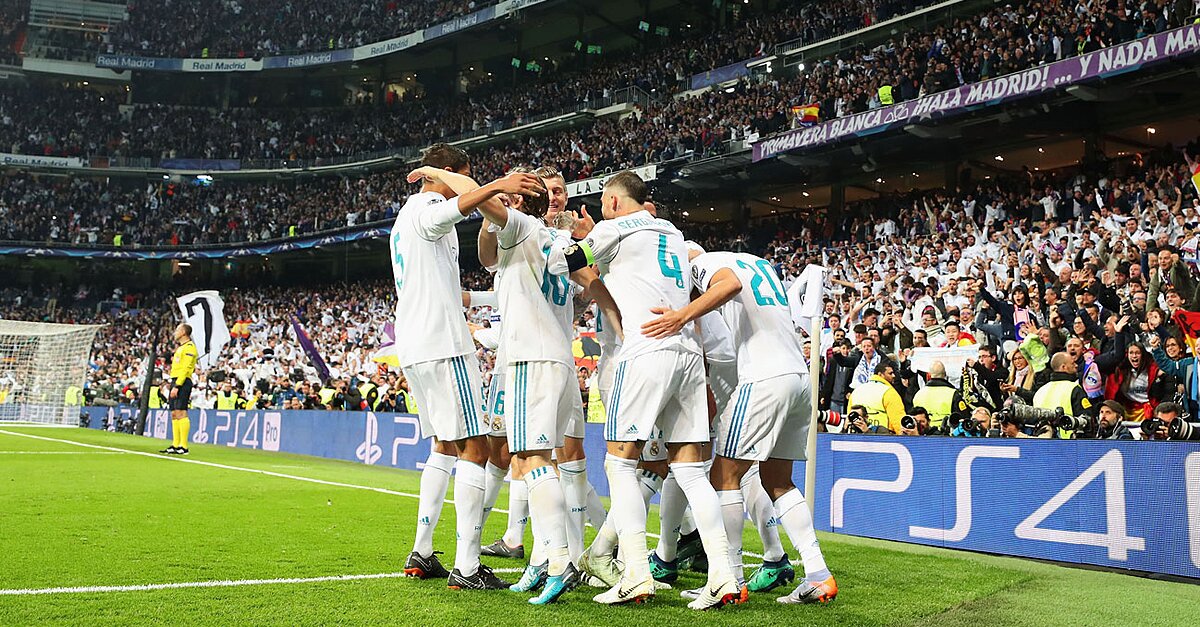 Karim Benzema scored twice as Real Madrid drew 2-2 with Bayern Munich to seal its place in a fourth Champions League final in five years with a 4-3 aggregate victory.

Yet again this season, though, Madrid was left clinging on, reliant on attacking excellence to overcome defensive shortcomings, and it went through more because of a dreadful error from Bayern goalkeeper Sven Ulreich than because of anything it had worked to create.

Like in the opening leg, Bayern had gotten off to the perfect start, taking a third-minute lead through Joshua Kimmich, but Benzema headed in a Marcelo cross to level eight minutes later.

But in the first minute of the second half, Ulreich missed a back pass from Corentin Tolisso, presenting Benzema with a gift for his second. James Rodriguez, who is on loan to Bayern from Real Madrid, did level the score on the night–and ostentatiously refused to celebrate–but Madrid held on and will face either Liverpool or Roma in the final on May 26 in Kiev.

Here are three thoughts on the semifinal thriller:

Bayern its own worst enemy again

Again, Bayern was its own worst enemy. It was a shocking error from Rafinha that gifted Real Madrid the winner in the first leg, and it was an even bigger mistake from Ulreich that handed Madrid the lead 20 seconds into the second half. Tolisso’s back-pass perhaps wasn’t the best but, still, Ulreich had plenty of time to clear. He started to go for the ball with his hands but then, as though realizing that would concede an indirect free-kick, he tried to adjust and missed the ball entirely, presenting Benzema with an open goal.

That left Bayern needing two and as it desperately sought them, the game became incredibly stretched with both sides’ defensive structures, never entirely convincing, disintegrating. Cristiano Ronaldo, with a chance to settle the tie, blazed another Marcelo cross over an empty net, but Bayern still had more than enough chances to win. It did get one as James tucked in after his initial shot had been blocked, but Madrid, wasting time and breaking up the game, held out.

Bayern was thwarted by Keylor Navas, who made a number of fine saves, none better than his remarkable reflex block to keep out a deflected David Alaba shot. Bayern will also look to referee Cuneyt Cakir’s decision not to give a penalty for a clumsy challenge by Sergio Ramos on Robert Lewandowski. But Lewandowski’s odd sluggishness didn’t help and both he and Muller squandered presentable opportunities. Across both legs, two terrible mistakes and a general wastefulness cost Bayern.

Last week, Marcelo made up for the defensive laxity that cost Madrid the opener by volleying in an equalizer and again both his strengths and weaknesses were on display. The Brazilian is a very modern fullback at an elite side, which is to say that he takes the attacking part of his job rather more seriously than the defensive. That is fine in the vast majority of games Madrid plays, when it dominates the ball and territory and doesn’t have much defending to do, but it does make Madrid vulnerable against sides that are capable of attacking.

Although Bayern’s opening goal, scored after three minutes, was primarily the result of an error from Sergio Ramos–who attempted a needlessly spectacular clearance and fluffed it to Kimmich, who slammed in–Thomas Muller’s ball into the box was only possible because of Marcelo’s failure to close him down–a starting basic lapse.

But eight minutes later, Marcelo found space at the other end of the pitch, took down a superb long pass from Mateo Kovacic, the last in a sequence of 28, and crossed for Benzema, unmarked at the back post, to head in.

Real Madrid back in the final but remains vulnerable

To widespread surprise, Casemiro was left on the bench as Zinedine Zidane reshuffled his midfield. Lucas Vazquez operated at right back, as he had late on last week after the injury to Dani Carvajal, using his pace against Franck Ribery, while Kovacic came into the center of midfield alongside Toni Kroos with Luka Modric moving out to the right flank. Vazquez found it very difficult to contain Ribery, though, as like in the first leg, Bayern dominated in midfield. This is a recurring issue for Madrid and one of the reasons Zidane’s side seems so incapable of controlling games.

In truth, shuffling personnel is never going to solve the problem, which is structural. The 4-4-2 perhaps gives greater stability than the 4-3-3 Madrid has often played under Zidane, but Madrid keeps falling into the same trap that undid Barcelona away to Roma. If the two forwards don’t track back, if they perform little or no defensive function, it means any defender stepping forward will create an extra man in midfield. With Alaba back after his back injury and Kimmich as attacking as ever, Madrid struggled badly.

Even Mats Hummels was encouraged into a slaloming dribble midway through the first half, leading to the chance James fired over from four yards with the goal gaping after Navas had saved from Lewandowski.

Real Madrid is back in the final with a chance at a fourth trophy in five years and a third in a row, but it is far from unbeatable.