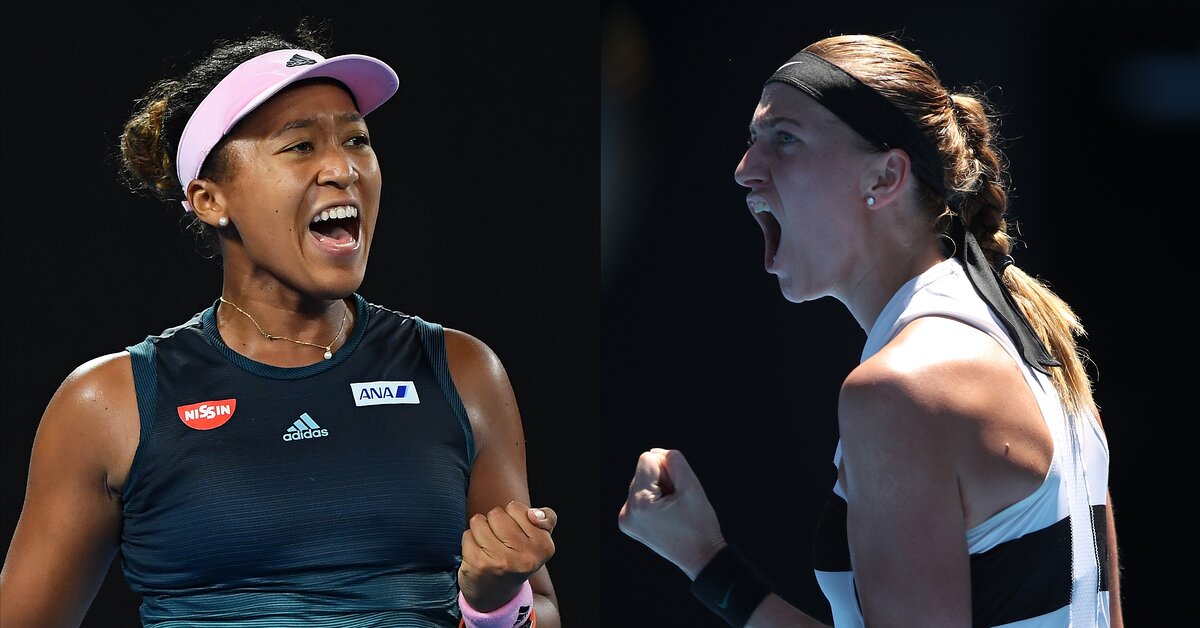 The 2019 Australian Open women’s final is set: it’ll be No. 4 Naomi Osaka vs. No. 8 Petra Kvitova. The winner of the match will not only add to their Grand Slam tally—Osaka has one, Kvitova two—she will also become world No. 1 for the first time in her career.

Our SI panel of experts previews what shapes up to be a fantastic match. It will air on Saturday, Jan. 26 at 3:30 a.m. EST on ESPN.

Who has been more impressive getting here?

Jon Wertheim: It’s a great question, because the paths have been so very different. Strictly from an on-court perspective, you have to go with Kvitova, who has yet to drop a set and looked fantastic throughout the tournament. On a more macro level, it’s Osaka—so often after a breakthrough victory do we see a player struggle with all that comes with it. Osaka has handled everything so gracefully, and she’s played her best in the biggest moments in this event. Both will come in feeling very confident.

Stanley Kay: Kvitova has yet to drop a set this tournament—she’s only been pushed beyond a 10-game set once—while Osaka has thrice needed a third set to advance. But while Kvitova has been the more dominant player in Melbourne, I’m incredibly impressed by Osaka’s reaching consecutive Grand Slam finals after winning her first major in September. I think that says as much about her attitude as her tennis ability.

If we zoom out, though, Kvitova’s recovery from a 2016 knife attack to again reach the highest level of tennis is as impressive a journey as any in sports.

Do I have to choose?

Jamie Lisanti: How are we defining impressive? Is it Osaka, age 21, who just four months ago defeated Serena Williams at the U.S. Open to claim her first major title? Not only did Osaka beat Anastasija Sevastova, Elina Svitolina and Karolina Pliskova en route to her second major final appearance, but she did so after starting the season and arriving in Melbourne with new pressures and expectations. From signing a handful of new sponsorships to facing the inevitable question—How will she back up her first major win?—Osaka has handled the spotlight with remarkable composure.

Or is it Kvitova, a two-time major winner at Wimbledon in 2011 and ‘14, who is into her first Grand Slam final since a knife-wielding intruder attacked her at her home in Prague in December 2016? The assault left Kvitova fearing for both her life and her tennis career, as the injuries to her left hand (her racket hand!) required emergency surgery and threatened her ability to even hold a racket again. Since returning from those injuries, Kvitova has played herself back into form—in Melbourne, there’s no doubt she looks fitter than ever and her confidence is beaming.

All this to say: this entire final is impressive. Did we mention that the WTA No. 1 ranking is on the line? Pick a side if you want, but I’m going to sit back and enjoy this gift from the tennis gods.

Daniel Rapaport: I think Jon put it perfectly. Big picture, it’s hard to handle anything as well as Osaka has handled all that comes with a Grand Slam victory. Looking striclty at on-court results, it has to be Kvitova.

Tristan Jung: Osaka has been more impressive thus far, even if Kvitova has been more dominant. Osaka’s road to the final went through two tricky opponents in Anastasija Sevastova and Su-wei Hsieh, and Osaka needed comeback victories to beat both. She also demolished No. 6 seed Elina Svitolina, while Kvitova has only played one seeded player the entire tournament (Ashleigh Barty).

What are the keys to the match for Kvitova?

JW: A lot of this will be adjusting to Osaka’s style, as the two have never played each other before. Kvitova also gets a break with the forecast, as her disdain for hot and sticky conditions is well-documented. She needs to use her advantage as a lefty by giving Osaka some different looks and stay aggressive from the onset.

SK: Osaka might have the best forehand on tour, but Kvitova’s left-handedness gives her the ability to serve wide and follow it up with her forehand down the line. Osaka’s backhand is strong as well, but keeping the ball away from Osaka’s formidable forehand will give the Czech an edge.

JL: Let’s take a look at Kvitova’s Australian Open so far (via the WTA’s Courtney Nguyen):

That about sums it up, no? If I’m on Team Petra, I wouldn’t change a thing for the final against Osaka. Kvitova has been unstoppable in Melbourne, surviving the heat (which typically overwhelms her) and, more importantly, showing that she has the mental strength to overcome such a traumatic, tragic experience and return to a high level of tennis. Luckily for Kvitova, temperatures in Melbourne on Saturday night will be much cooler, which could be an advantage against someone like Osaka who thrives in the warmer weather. She’ll need to use her signature aggressiveness to counter Osaka’s formidable serves and shotmaking.

There’s no doubt that Kvitova is also the more experienced player in big matches; in fact, the Czech has an undefeated record in major finals (2-0) and a strong 26-7 overall record in finals in her career. If Osaka starts to develop any momentum on Saturday, Kvitova should fall back on her experience and mental fortitude.

DR: She has to get ahead. Osaka is probably capable of reaching a higher level than Kvitova, so you don’t want her to get confidence that comes with a lead. She’d also do well to dictate with her forehand, particularly to Osaka’s backhand. Take a lesson from how Nadal plays Federer: keep the exchanges, for the large part, lefty forehand-righty backhand.

TJ: Well, it has to be win the first set, right? Osaka has not lost after winning the first set since the last match of 2016. Kvitova has also benefitted heavily from dominating first sets at this tournament, but coming from a set down against Osaka seems difficult, even for a veteran like Kvitova. Then again, if anyone can come back from a set down against Osaka, it will be Kvitova, who has 10 comebacks after losing the first set in the last year alone. But against a player of Osaka’s quality and fitness, trying to outlast her over two-plus hours is not a good idea. The Czech will also need to keep her backhand consistent throughout the match–Osaka’s huge forehand is going to to the lefty’s equally huge two-hander, but Kvitova is more prone to unforced errors on that side than Osaka’s forehand. Kvitova might also want to attack the net and pressure Osaka. Winning 10-15 quick points at the net would be a huge bonus.

What are the keys to the match for Osaka?

JW: She can’t allow herself to think big picture. Her life has already changed so much after the U.S. Open victory: higher ranking, more endorsements, etc. But this would take her to a different level entirely. She’d become No. 1 in the world, the first Asian woman to ever accomplish that. With the 2020 Olympics on the horizon, she’d emerge as arguably the nation’s biggest sports star. The marketing opportunities are off the charts. But she can’t allow herself visions of such grandeur; simply focus on the tennis match at hand.

SK: Start strong. It sounds like a cliché—of course you want to start strong!—but in this case, it could be decisive. Incredibly, Osaka hasn’t lost when she’s won the first set since 2016; likewise, Kvitova has won 22 straight matches at Grand Slams when she’s won the first set. Kvitova has yet to play a do-or-die set in Melbourne, so Osaka could rattle her opponent by putting pressure on her early.

JL: While Kvitova has yet to drop a set in this tournament, Osaka has played three tough three-setters in Melbourne, so she’ll need to find the right balance of energy and excitement against a fresher, more experienced opponent. Though her rise to the top of the game has been rapid and recent, Osaka has backed up the hype with power and poise: she’s hit more aces (50) and winners (226) than any other woman at the 2019 Australian Open. If Osaka can hone her booming serve and boost her second serve percentage—she only won 41% of her second serves in the semifinals against Pliskova—it will go a long way against a a player like Kvitova.

DR: I’m with Stan—Kvitova hasn’t felt really any #ScoreboardPressure over the past two weeks. If Osaka can be the more assertive player from the jump and sow some uncertainty in Kvitova’s head, the match could well turn her way.

TJ: Osaka has been clutch throughout the entire tournament, and it’s key for her to stay that way against Kvitova. Going down an early break to Kvitova is a recipe for disaster, and Osaka will need to remain calm under pressure. There’s a good chance at least one set goes into a tiebreak as both players are too good to get blown out of both sets. Also, both players are spectacular in deciding sets: Kvitova is 19-5 over the last year, while Osaka is 8-3.

Who wins, what score, and why?

JW: I gotta go veteran—Kvitova in three sets. It’s a close call. Having spent so much less time on court, Kvitova has an advantage. Osaka has solved a lot of riddles, but she’s probably the player who will have to adjust to Kvitova more than vice versa.

SK: Kvitova in three sets. It’s hard to pick against Kvitova the way she’s played so far this tournament. Her fresh legs, and her excellent record in finals—26–7 over her career, including wins in her last eight—will put her over the top.

JL: Truthfully, this is a tough one. Something in my gut tells me Petra Kvitova will take the title—and the No. 1 ranking—in three sets. There’s something about what Kvitova has been through and how hard she’s worked to get back to this level that makes this Australian Open final feel like it belongs to her. The deep-rooted, profound motivation is there. The confidence is there. The I’ve-done-this-twice-before-but-not-in-awhile maturity is there. Petra Kvitova is your 2019 Australian Open champ and new WTA World No. 1.

DR: I truly believe Osaka is the next massive star in the women’s game, the one to take the mantle from Serena Williams. This win will elevate her to a different level of international stardom. And she knows that. And that doesn’t bother her. That’s what makes her so special. Osaka in three. A classic.

TJ: I have Osaka winning 6-4, 6-7, 6-3. Kvitova has been on fire with an 11-match win streak that goes back to the first round of the Sydney International, but Osaka is just playing too well for anyone right now. The two players have never played each other before, but the last time Osaka went into a Grand Slam final against one of the sport’s all-time greats, she emerged victorious. But this matchup is way too close to call. The easiest pick is to take the over (currently hovering around 22.5 games) and assume there will be two close sets at the very least.