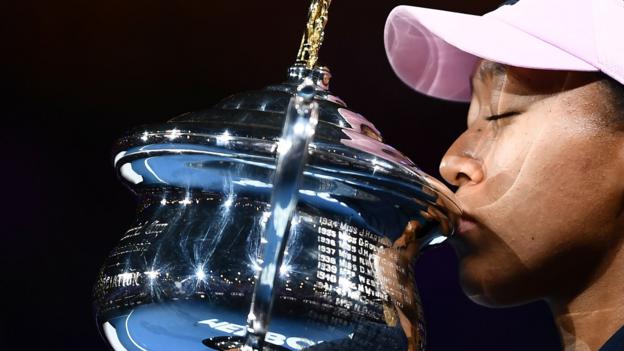 The fourth seed broke for 2-1 in the decider, then served out to clinch victory in Melbourne.

Eighth seed Kvitova, 28, was bidding for her first major title since being stabbed in a knife attack.

Osaka was all smiles during the trophy presentation – in contrast to her US Open victory – and she continued a tradition of slightly awkward acceptance speeches.

“Erm, hello. Sorry, public speaking isn’t my strong point so I hope I can get through this,” she said.

“I read notes before this but I still forgot what I was meant to say. Thank you everyone, I am really honoured to have played in this final.”

Two-time Wimbledon champion Kvitova, who said she was fortunate to be alive after the stabbing incident in December 2016, showed resilience to take the match into a third set as momentum swung from side to side.

Victory seemed to be inevitable for Osaka before Kvitova broke back for 5-5 in the second, then going on to win 12 points in a row to lead for the first time since the start of that set.

However, after shedding tears at the end of the second set while she left the court for a bathroom break, Osaka regained focus to take a decisive advantage in the decider.

She went on to become the first player since American Jennifer Capriati in 2001 to follow her maiden Grand Slam win immediately with another triumph.

She missed a fourth championship point with a long return, but took the fifth when Kvitova hit a forehand wide.

A smiling Osaka dropped to her haunches on the baseline before returning to her chair and covering her face in shock as she savoured the moment.

Osaka, who replaces Simona Halep at the top of the rankings after the Romanian’s 48-week stint, becomes the first Asian player to be world number one.

She is also the youngest to hold top spot since Denmark’s Caroline Wozniacki, then aged 20, took the ranking in 2010.

A different type of drama to US Open win

Osaka claimed her first Grand Slam by beating 23-time champion Serena Williams in a dramatic final at Flushing Meadows, which is remembered for the American’s row with umpire Carlos Ramos.

That left the Japanese player in tears and hiding behind her visor as she collected the trophy to the sounds of jeers from home fans in New York angry at Ramos, with Williams having to appeal for calm and respect for the new champion.

This time the atmosphere as she collected the trophy could not have been more different.

The Rod Laver Arena, which sounded evenly split in terms of support during the match, erupted when she finally sealed victory after two hours and 27 minutes.

“I wouldn’t have wanted this to be our first match, but huge congratulations to you and your team,” she told the Czech.

“You are amazing and I am honoured to have played you in a Grand Slam final.”

What was similar to Osaka’s US Open victory, however, was a match also filled with intense drama.

Serve ruled in a tight first set before Osaka dominated the tie-break to edge ahead, boosted by the knowledge she had won her previous 59 matches after winning the opener.

That extraordinary record, which stretches back to 2016, meant Kvitova knew the importance of making a fast start to the second set – and she did that by breaking for a 2-0 lead.

Osaka immediately broke back, though, going on to move within touching distance of the match before another dramatic twist.

Kvitova was contesting her first Grand Slam final since her second Wimbledon win in 2014, with many fans hoping she could cap one of the sport’s most inspirational stories with a fairytale finish.

Moments after Osaka sealed victory, an emotional Kvitova sat with her head in her hands as she seemed to be processing how far she has come over the past two years.

The left-hander needed surgery on her playing hand after the attack in a robbery at her home in the Czech Republic.

She sustained damage to ligaments and tendons when fighting off an intruder, but returned to the sport five months later.

“It is crazy. I cannot believe I played in the final of a Grand Slam again,” said Kvitova, whose voice was breaking as she fought back tears.

“It was a great final – well done, Naomi.

“Thank you to my team for sticking with me, especially because we didn’t even know if I could hold a racquet again. It wasn’t that easy.”

Kvitova wiped away tears as the Laver crowd burst into supportive cheers and applause.

After showing extraordinary determination to return to the sport, Kvitova also demonstrated her fight on the court to take her first Australian Open final into a decider.

Trailing 5-3 in the second set, she survived three championship points by landing five successive first serves and then broke to level at 5-5.

That put Kvitova in the ascendancy as Osaka grew nervous and frustrated, the Czech winning 18 of the final 22 points to surprise most watching by giving them a third set.

An easy hold at the start of the decider put her ahead before the Japanese regained composure, Kvitova double-faulting to hand over the key break point, which Osaka punished with a backhand.

Defeat means Kvitova also missed out on becoming the world number one for the first time, although she will rise to second when the rankings are released on Monday.

Osaka has come an enormously long way in a very, very short time. At the age of 21, she has won back-to-back Grand Slams and this time she can rejoice in the moment. This is her moment. She has won it in dramatic style after a fabulous comeback from Kvitova.