Once again Madrid are at the centre of European football, as both Real Madrid and Atletico Madrid will once again be involved in European finals later this month.

With a second place finish all but confirmed for Diego Simeone’s men, there was the sense that Atletico’s minds were elsewhere today.

Espanyol in truth, also have very little left to play for this season, however the Catalan side showed more intensity throughout and were deserved victors.

Simeone made five changes from their midweek Europa League semi-final win against Arsenal, with the likes of Antoine Griezmann dropping to the bench, whilst Diego Costa and Angel Correa both missed out due to suspension.

In fact, Atletico had only conceded four home goals in the league before today’s game and few would have predicted that it would be Espanyol who would break the duck for away sides at the Wanda Metropolitano. 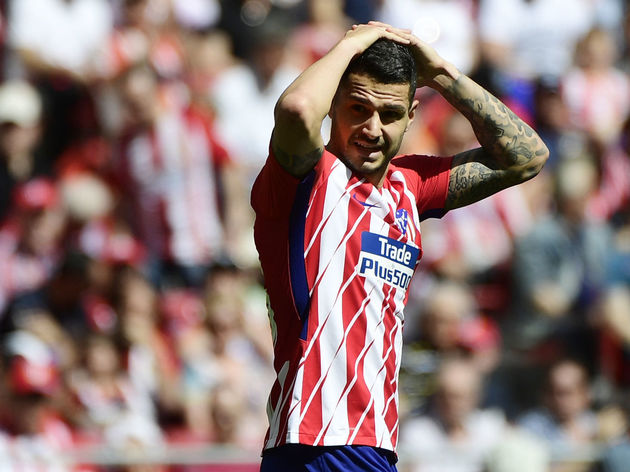 Atletico departed from the 4-4-2 formation that they have become synonymous with in recent years, playing a back three with Filipe Luis and Sime Vrsaljko acting as the wing backs.

And it took quite a while for the game to get going, with both sides struggling to carve out any decent opportunities, with the tempo of the game suffering from the intense Madrid heat.

The first chance of the game came in the 22nd minute when the ball fell to Vitolo inside the penalty area, but his scuffed shot went just wide of the far post.

Three minutes later, Vitolo’s day was cut short, the midfielder pulled up with what appeared to be a hamstring problem and Atletico, clearly not wanting to take any chances ahead of their Europa League final were quick to withdraw the winger, bringing on Arona Sane.

Gerard Moreno, who has been one of the only shinning lights in this Espanyol side this season, thought he had his 16th goal of the campaign when his low drive beat Jan Oblak, however replays showed that the Slovakian stopper made the slightest of touches, tipping the ball on to his post.

As half time approached, the game settled back into its mundane pace, with Atletico dominating the ball but looking content not to force the initiative.

Atletico Madrid made another change as they emerged from half time, with Saul Niguez replacing Koke, this, no doubt another ploy to keep both players fit ahead of their clash againsnt Marseille.

The deadline was finally broken in the 53rd minute and it was Espanyol who found the breakthrough, when Stefan Savic headed the ball into his own net.

The original shot, destined to be saved my Oblak ricocheted of the head of the centre back, leaving the goalkeeper rooted to the spot and supplying Espanyol with an unlikely lead.

The next big chance of the game fell again to Espanyol, however Oblak – demonstrating why he is so highly sought after – made a smart double save leaving Moreno wondering how he was yet to score.

And it was Espanyol who settled the tie in the 77th minute through Leo Baptistao, the midfielder struck a clean shot from the edge of the penalty area, silencing the Atleti fans who have seldom seen their side concede at home this season.