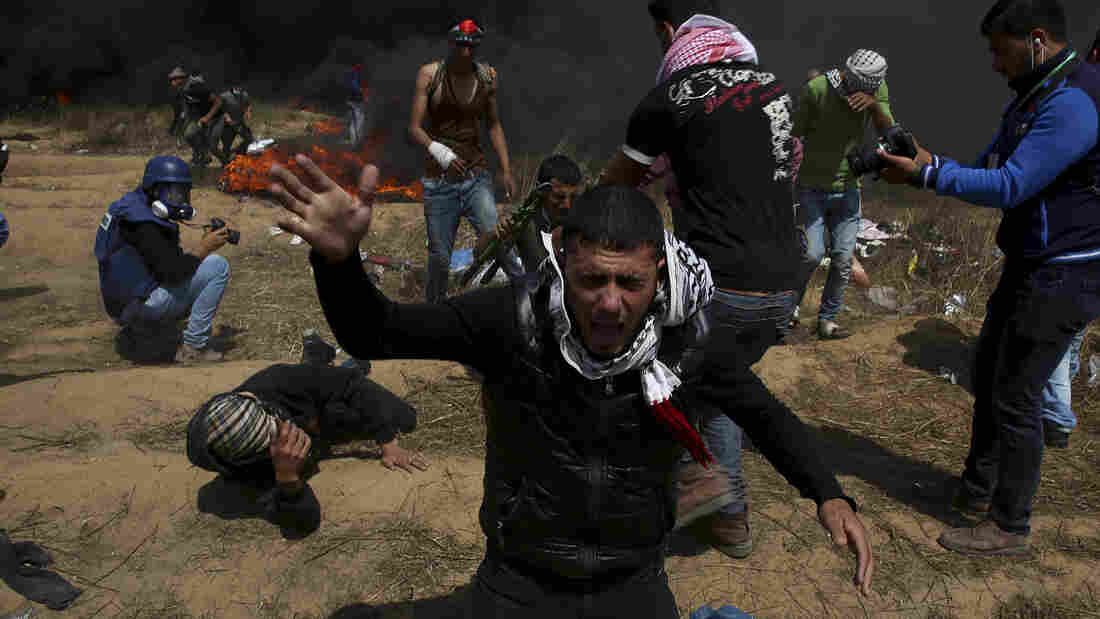 Palestinian protesters fall amid the billowing tear gas fired by Israeli troops along the Gaza-Israel border. Palestinians converged on the area for a new round of protests Friday. Adel Hana/AP hide caption 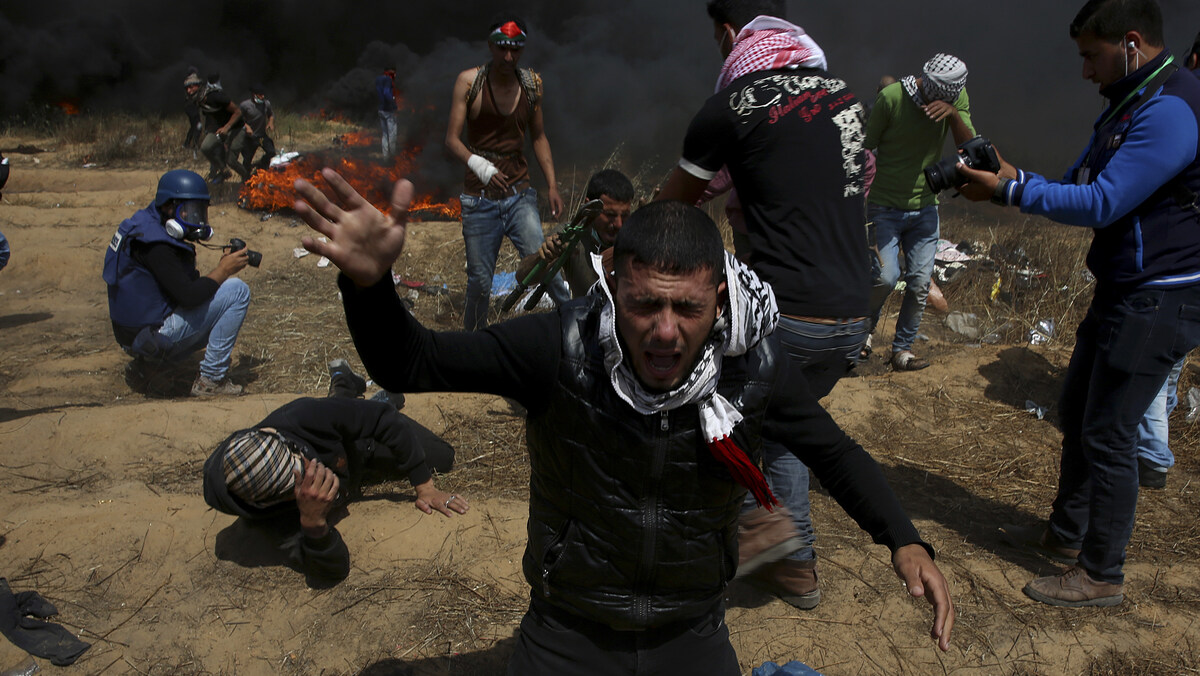 Palestinian protesters fall amid the billowing tear gas fired by Israeli troops along the Gaza-Israel border. Palestinians converged on the area for a new round of protests Friday.

At least three Palestinians died Friday, and a fourth died Saturday after being shot the day before, amid violence between protesters and Israeli troops along the Gaza-Israel border, Palestinian officials say. They say hundreds more were injured when Israeli troops opened fire on the demonstrators who rushed a security barrier in the region, seeking to cross into Israel.

The Palestinian Ministry of Health says at least 178 of those casualties came due to the Israeli security forces’ use of live ammunition.

Friday’s violence marks a new chapter to an already bloody series of confrontations between Palestinian protesters and Israeli troops, which have unfolded over more than a month. Organizers call the Great March of Return, as it’s billed, a nonviolent demonstration intended to call attention to the plight of Palestinian refugees and to demand the return of lands lost to Israel in 1948.

At the same time, Israeli authorities say Hamas, the militant group that controls the Palestinian territory of Gaza, has been pushing for violence in the area and encouraging some armed, aggressive members of the demonstrations. 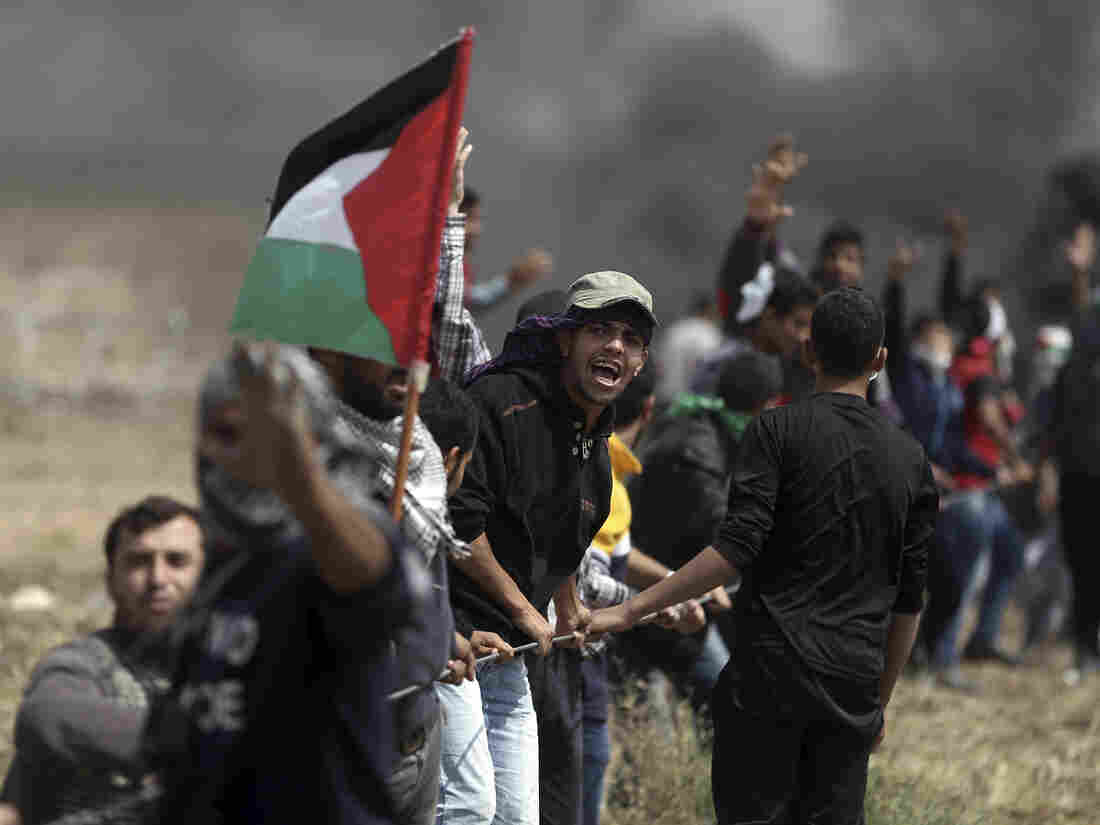 Palestinian protesters pull at part of a fence placed by the Israeli army during the demonstration Friday. Khalil Hamra/AP hide caption 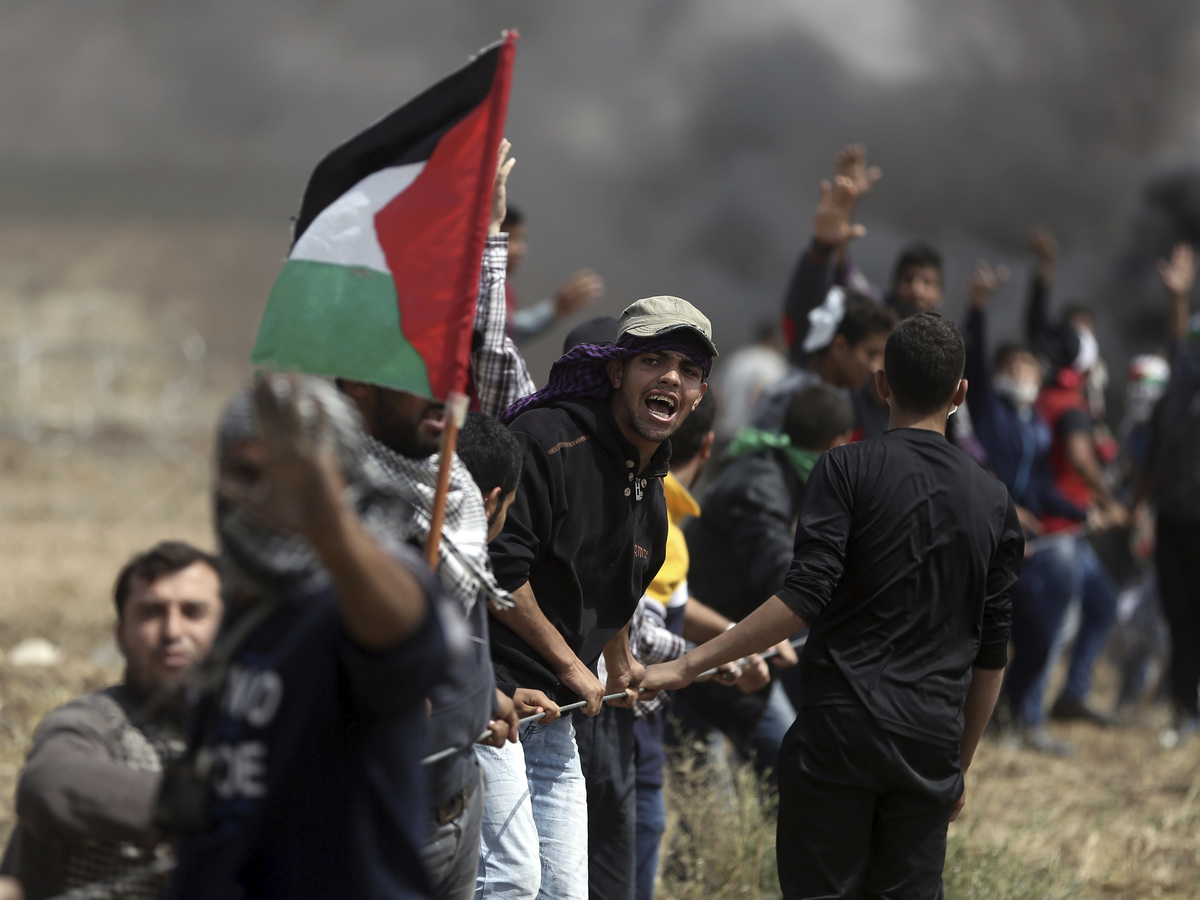 Palestinian protesters pull at part of a fence placed by the Israeli army during the demonstration Friday.

Over 40 Palestinians have been killed and more than 5,500 injured in Gaza during the periodic clashes between the two sides, according to the United Nations. The U.N. said in a statement Friday that many of the wounded and killed “appear to have been unarmed or not presenting an imminent threat” to the Israeli security forces, yet more than 1,700 of those injured were hit by live fire. Among the dead were also four children, the U.N. noted.

“The use of excessive force against any demonstrator is reprehensible, but children enjoy additional protection under international law,” Zeid Ra’ad Al Hussein, the high commissioner for human rights, said in the statement.

“It is difficult to see how children, even those throwing stones, can present a threat of imminent death or serious injury to heavily protected security force personnel,” he added. “Images of a child being shot as he runs away from Israeli security forces are downright shocking.”

Amnesty International described Israeli actions as a “murderous assault,” calling for Israel’s trading partners to cease the sale and delivery of arms to the country.

“For four weeks the world has watched in horror as Israeli snipers and other soldiers, in full-protective gear and behind the fence, have attacked Palestinian protesters with live ammunition and tear gas,” the group’s regional director, Magdalena Mughrabi, said Friday. “Despite wide international condemnation, the Israeli army has not reversed its illegal orders to shoot unarmed protesters.”

Israel, for its part, said its actions Friday were a response to an unruly group among the more than 12,000 people who had joined the march. Israeli Defense Forces spokesman Jonathan Conricus described “a massive attempt by dozens of rioters” to breach a border fence less than a kilometer from Israeli civilians.

The New York Times, citing several witnesses in the area, reports that two Palestinians in the group wielded handguns, firing on Israeli soldiers before turning to flee when the troops retaliated with a hand grenade. Though, the paper adds, some other witnesses also denied that the pair of men had guns.

“Rioters tried to tear down the fence and burn it, but were repelled by the IDF,” Conricus tweeted Friday, asserting that Hamas lay behind the repeated attempts to break through the fence.

He added that the Israeli military retaliated later Friday by striking six targets belonging to Hamas: “IDF response will not be confined to border area,” he said.

Amid the bloody confusion of the past several weeks, at least two Palestinian journalists have been shot and killed, according to Reporters Without Borders, or RSF — most recently on Wednesday, when Ahmed Abu Hussein was “brought down by a clearly direct and deliberate shot.” And this, the group says, despite Hussein’s reportedly wearing the bright attire clearly marking him a television journalist. 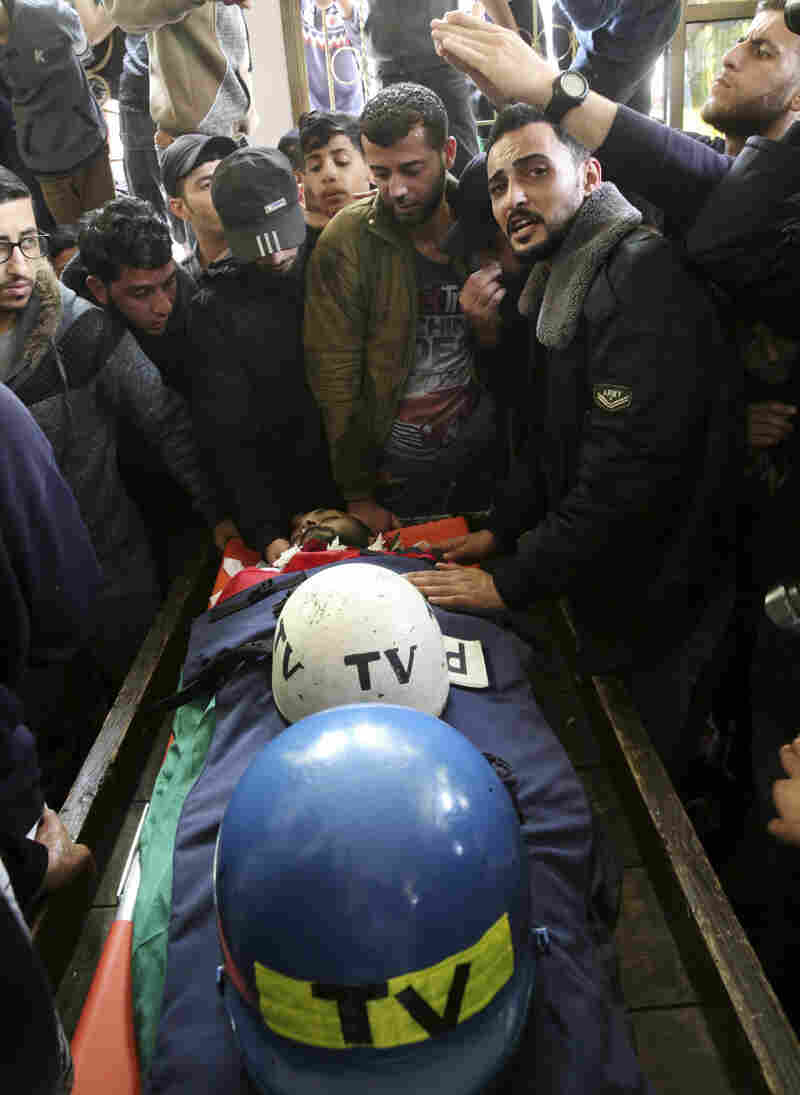 Mourners gather Thursday around the body of Palestinian journalist Ahmed Abu Hussein, who was killed by Israeli troops while covering a border protest. Resting with him are his helmets marking him a member of the television media. Adel Hana/AP hide caption 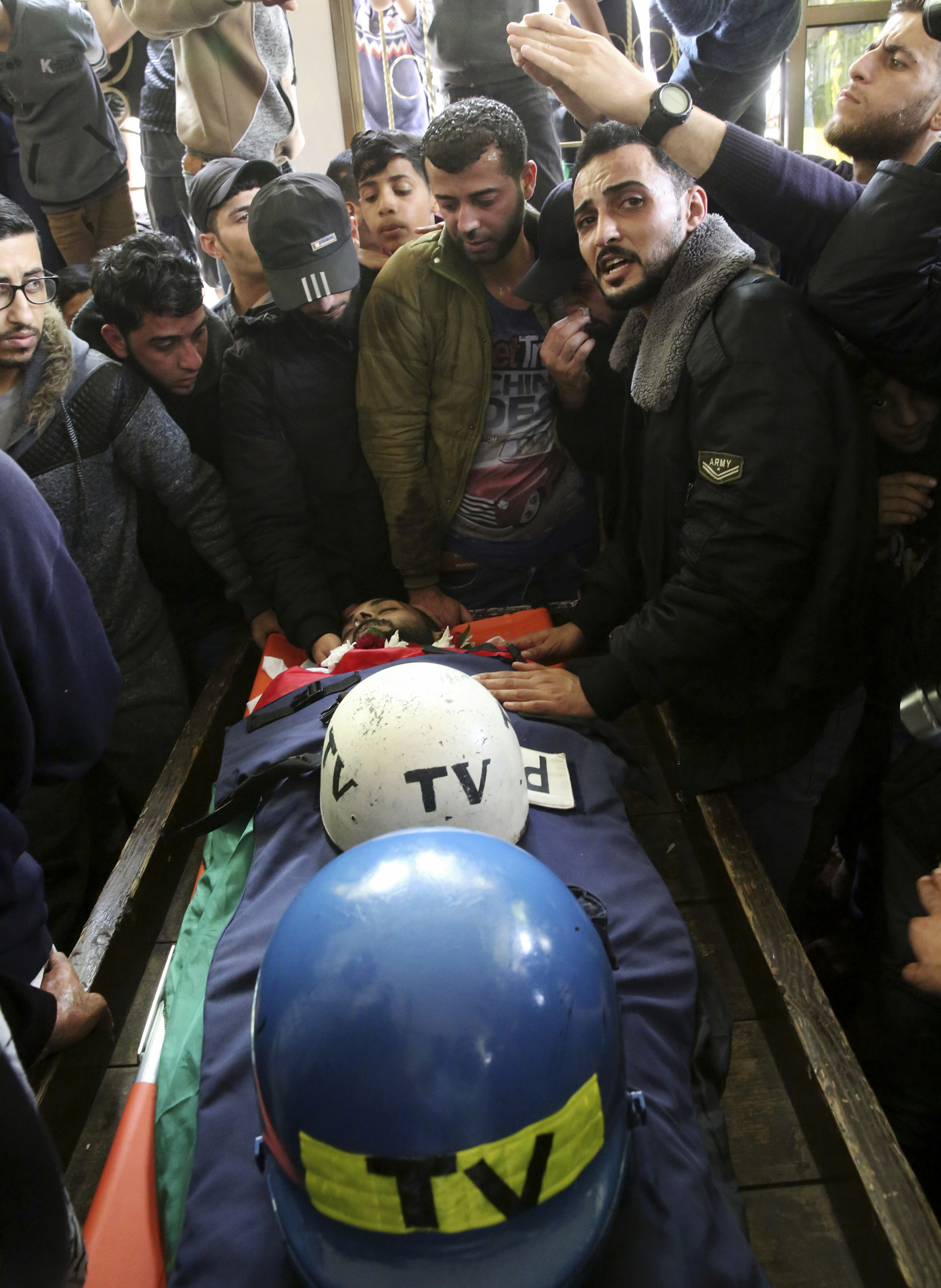 Mourners gather Thursday around the body of Palestinian journalist Ahmed Abu Hussein, who was killed by Israeli troops while covering a border protest. Resting with him are his helmets marking him a member of the television media.

“Why was this journalist deliberately targeted when he was several hundred metres from the border?” Christophe Deloire, secretary-general of the free press advocacy group, said in a statement Thursday. “We call on the Israeli and Palestinian authorities to launch an independent investigation without delay and to do whatever is necessary to ensure that those responsible for this deliberate crime against press freedom are brought to justice.”

Photojournalist Yasser Murtaja, 30, was killed several weeks earlier, also while wearing clothing clearly labeling him a member of the media.

“You don’t know who is a photographer and who is not,” Israeli Defense Minister Avigdor Lieberman said then, as Estrin reported. The minister suggested Murtaja had been flying a drone above Israeli troops at the time he was shot. “Whoever employs drones above Israeli soldiers needs to understand he is endangering himself.”

Despite the bloodshed, Palestinians do not intend to end the Great March of Return soon. It is expected to continue building toward mid-May, when the world will mark the 70th anniversary of Israel’s founding and the wars that ultimately scattered hundreds of thousands of Palestinian Arabs.