Fulham secured a 1-0 victory over Aston Villa in the Championship play-off final on Saturday to ensure their promotion to the Premier League next season.

The Cottagers missed out on automatic promotion by just two points this campaign, but they ensured that their four-year spell away from the top flight of English football would come to an end thanks to a first half goal from club captain Tom Cairney.

Despite an impressive performance in the second half, Aston Villa’s spell in the Championship will have to be endured for at least one more season following their defeat at Wembley, but the club will be confident that they can mount a stronger promotion push next campaign.

Aleksandar Mitrović and Ryan Sessegnon looked to give Aston Villa’s defence a headache from the first minute, but Fulham’s early dominance of possession wasn’t converted into clear chances at goal.

Robert Snodgrass offered the Villans some attacking threat in the opening 20 minutes, but even the smart footwork of Jack Grealish proved to be ineffective in creating an opportunity to test Marcus Bettinelli.

But midway through the first half, it was Fulham captain Cairney who popped up with the first real chance of the game, and the 27-year-old made no mistake in front of goal to give Fulham the advantage.

An outstanding pass from Sessegnon split Villa’s defence with ease before Cairney curled the ball past Sam Johnstone from close range with his reliable left foot. 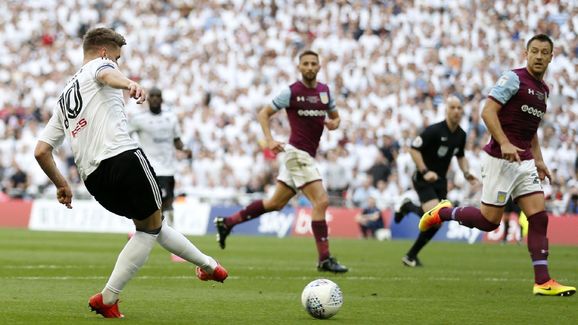 Ryan Fredericks was fortunate to escape a red card after appearing to deliberately stamp on Grealish soon after the goal, with chances continuing to come at a premium for both sides throughout the remainder of the first half.

Villa’s 22-year-old playmaker Grealish wasted their best chance of the half from close range following an innovative free kick routine, while Mitrović took too long with a great opportunity from inside the penalty area in the last action before the break.

Fulham struggled to dictate possession after the restart and Villa created a couple of dangerous chances, although Bettinelli remained a largely untroubled figure in between the sticks.

Albert Adomah, Robert Snodgrass and Conor Hourihane proved to be a thorn in the side of Fulham throughout the opening exchanges of the second half, with the Cottagers limited to infrequent counter attacks in their search for another goal.

Jack Grealish came close to scoring an incredible solo effort on the hour mark before having a strong shout for a penalty waved away by referee Anthony Taylor. The 22-year-old then escaped a possible red card for a late tackle on Tom Cairney.

Stefan Johansen fluffed his lines on his weaker foot after Fulham were gifted a chance at goal, while Aboubakar Kamara was unsuccessful with a tame penalty following a challenge from Alan Hutton.

The Cottagers’ tough task of retaining their lead was made even harder when Denis Odoi was shown a second yellow card after a reckless tackle on Grealish – a challenge which could have been worthy of a straight red.

Substitute Jonathan Kodjia looked to make an impact straight after his introduction but Fulham put their bodies on the line to maintain their narrow lead, with Villa launching attack after attack in search of an equaliser.

And it was Fulham’s incredible effort in defence which prevailed until the final whistle, leaving Villa empty-handed.

The Villans were by far the better side during the second half but the damage was done from their tame display in the first 45 minutes, with Fulham edging the game despite being reduced to ten men to restore their status as a Premier League club.