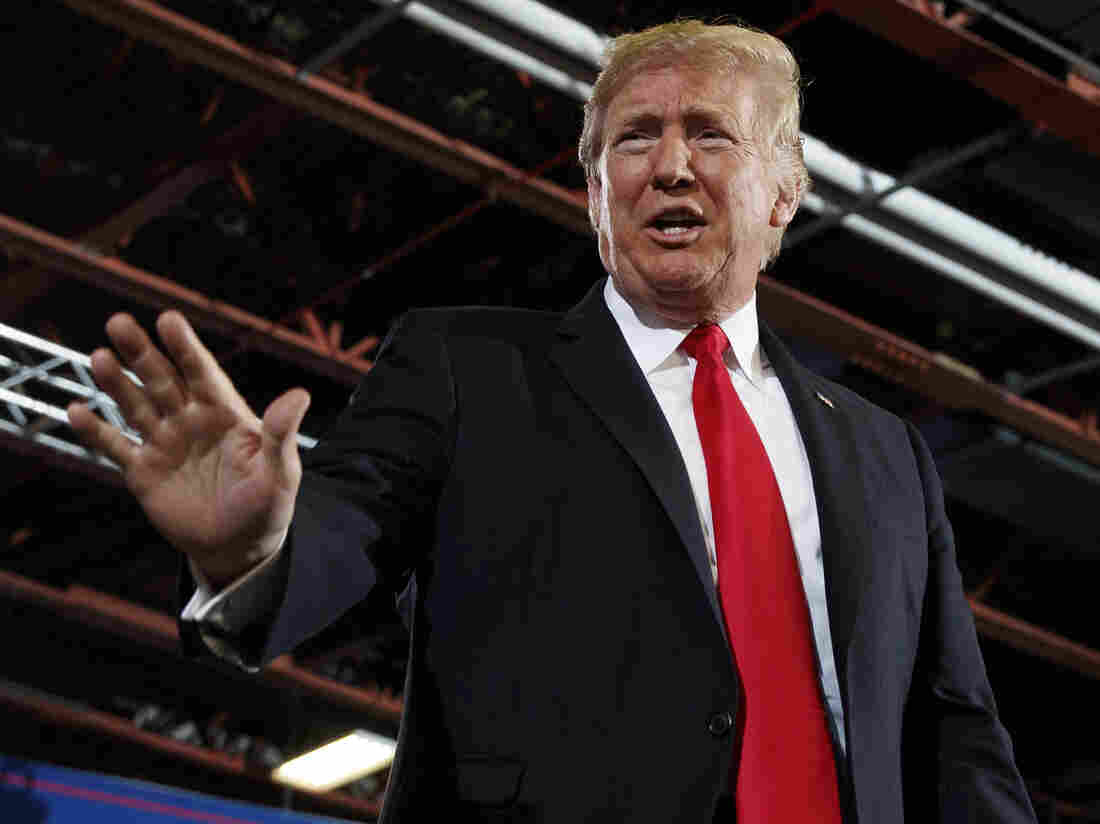 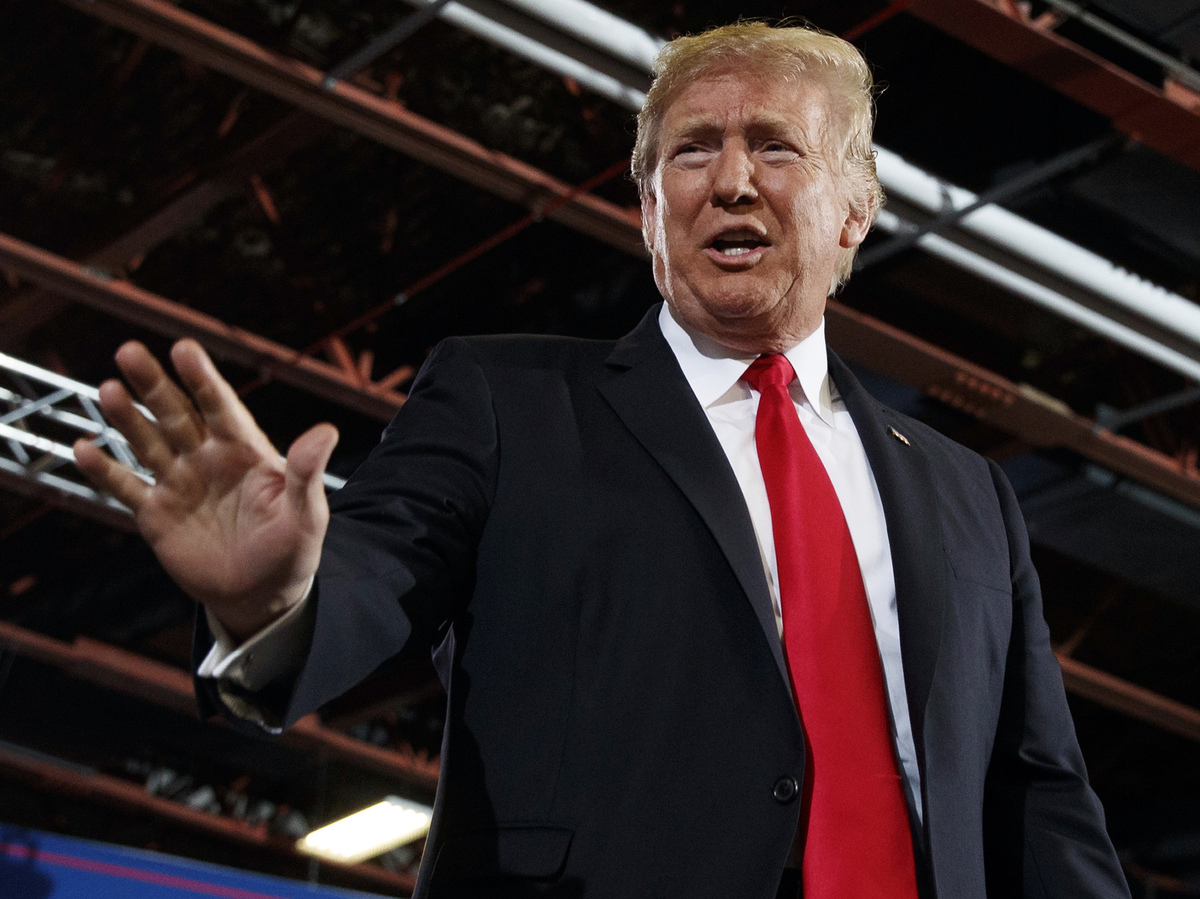 President Donald Trump arrives to speak at a rally in Great Falls, Mont., on Thursday.

The final hours of President Trump’s decision-making on his second Supreme Court nominee are being described as hectic and unpredictable – and the president has still not made a decision.

“It’s insane” over there, said a source close to the process. Few have had any sleep in Bedminster, N.J., as deliberations continue over the pros and cons of the potential nominees, and no one is sure which way the president is going to go, the source said.

Trump is likely to make a decision by 9 p.m. Sunday, 24 hours ahead of his official announcement time in Monday prime time, the source said.

The finalist list remains Brett Kavanaugh, Amy Coney Barrett, Raymond Kethledge and Thomas Hardiman. As of Friday, Kavanaugh and Barrett were the top two, but warring between their camps and questions about their potential thorniness and delays in getting confirmed, are boosting the chances of Kethledge, Time reports.

But that doesn’t mean Hardiman is out of the mix.

The Pittsburgh-based federal appeals judge was the runner up to Justice Neil Gorsuch for the Supreme Court nomination last year.

“Hardiman was fully vetted last time, and flawless record, too,” a source outside but close to the White House told NPR. “So, he would be the easy pick.”

Kavanaugh was a favorite of some high-profile boosters, inside and outside the White House, but his stock has fallen off since Friday for a couple reasons: his ties to former President George W. Bush and the potential difficulty in getting him confirmed.

A photo of Kavanaugh appearing chummy with former Bush political strategist Karl Rove, who’s been critical of Trump, has been tweeted around by Trump supporters.

The only public statement this weekend out of the White House about the impending selection, was a tweet Saturday by the president.

“Big decision will soon be made on our next Justice of the Supreme Court!” he wrote.

Big decision will soon be made on our next Justice of the Supreme Court!

The New York Times is reporting that Senate Majority Leader Mitch McConnell has weighed in and is trying to urge Trump to pick either Kethledge or Hardiman for ease of confirmation.

Trump and McConnell have been in frequent contact since Justice Anthony Kennedy announced he would be stepping down from the court.

“I do think the president has to think about who is the easiest to get confirmed here,” added Sen. Roy Blunt, R-MO, on Sunday on NBC’s Meet The Press.

Courtesy meetings with the nominee and sitting senators will start on Tuesday and Wednesday. The “Sherpa,” or person guiding the nominee through that process, has not yet been confirmed.

Republicans in the Senate need to be completely united on the pick, because of the delicate nature of their majority. Sen. John McCain, R-AZ, is absent getting cancer treatment, so Republicans currently have just a 50-49 vote hold.

“One Republican senator can decide the fate of any Supreme Court nominee,” said Sen. Dick Durbin, the Democratic Whip, Sunday on NBC’s Meet The Press.

McConnell’s office has stressed that it took about two months each to get Justices Sonia Sotomayor and Gorsuch through, and they warn Kavanaugh’s background and work in Washington could slow confirmation.

Opposition researchers, vetters and Senate staffers would have to comb through not just his 286 opinions as a judge, the most of any current judge under consideration, but also his papers at the National Archives that would include his years in the Bush White House and his role in the Ken Starr investigation looking into President Clinton. Kavanaugh worked specifically on the suicide investigation of Vince Foster.

“I think Kavanaugh now raises too many questions,” the source close to the White House said. He is “generally considered to have a near-perfect record, but he has piles of history with the government going back to Ken Starr and GWB, all those docs are no doubt under review.”

The source described Kavanaugh now as “a little risky” because of that, “and — perhaps, in the end — too establishment for DJT [Donald J. Trump].”

Many in the president’s base simply do not trust Kavanaugh. They see him as too pragmatic and have painted him as the kind of nominee who could betray conservatives. They point to narrow aspects of an opinion he wrote on the Affordable Care Act, for example.

Barrett, on the other hand, has become a favorite of religious conservatives because of her thorny confirmation hearing to the federal bench last year. In that hearing, California Sen. Dianne Feinstein questioned her membership in a religiously conservative group. Feinstein faced backlash and criticism, especially from Catholic leaders who accused her of being anti-Catholic. Barrett is Catholic and was better known as a professor at Notre Dame before being named a federal judge last year.

But she is also seen as potentially difficult to confirm, given the narrowness of the Senate GOP majority, the previous controversy in her confirmation process when she was nominated for the federal bench a year ago, her lack of a deep judicial record of opinions and her openness to overturning Roe v. Wade. She has written that the case does not establish a “superprecedent.”

That could imperil support from Republican moderates in the Senate, especially Alaska’s Lisa Murkowski and Maine’s Susan Collins.

The White House might believe if it is faced at some point with replacing liberal Justice Ruth Bader Ginsberg, 85, that nominating a woman then could blunt opposition to her – even though they have, in many cases, polar opposite views of the law. Plus, holding Barrett, who is just 46, would give her more time to amass federal judicial experience.

Kavanaugh and Barrett had the inside track as of Thursday and Friday, as NPR first reported, but their supporters and opponents have gone after each other through the media and internally to the White House. And often when two factions war with each other of a judicial pick, a different candidate becomes more attractive.

Kethledge, like Kavanaugh, is a former Kennedy clerk. But he’s also an evangelical Christian, according to the Federalist Society, and he’s liked by Kavanaugh’s opponents and has none of the controversy on Capitol Hill of Barrett. He also has a deeper judicial record than she does.

Trump also likes that he’s written a book, reports Time, which also notes, however, that the president hasn’t read it.

In it, he notes that when writing opinions, he retreats to his converted barn office overlooking Lake Huron with no internet. He has said he gains 20 IQ points being in that office. Because of all that and his demeanor, the monastic Kethledge is referred among White House aides, Time notes, as “Gorsuch 2.0.”