AS Roma welcome Liverpool to the Stadio Oiimpico on Wednesday night, as both sides look to book their place in this season’s UEFA Champions League final in Kyiv.

Jürgen Klopp‘s side head into the second leg brimming with confidence, after cruising to a 5-2 win in the first leg at Anfield last week. The Reds will be wary however of a Roma side who will take great confidence from overturning a three-goal deficit against La Liga champions Barcelona in their last game at the Stadio Olimpico.

Zeljko Buvac is taking a leave of absence from the club, for ‘personal reasons’. Despite that, the Reds will be confident of progressing to their first Champions League final in 11 years after their impressive first-leg showing.

Their Italian adversaries meanwhile are seeking their first ever appearance in European football’s pinnacle event, having surprisingly reached the semi-final stage for the first time in their history.

Liverpool have been in devastating form at home in the Champions League this season, and last week’s first leg saw that trend continue for the first 80 minutes.

PFA Player of the Year Mohamed Salah continued his great run of goalscoring form, as he notched two goals in quick succession to fire the Reds into a two-goal lead at half time.

Sadio Mane made it three ten minutes into the second half, before a brace from Roberto Firmino looked to have put the game out of sight with just over twenty minutes remaining.

However, not for the first time this season, Liverpool took their eye off the ball defensively to allow I Giallorossi back into the tie late on.

First, an error from Dejan Lovren allowed former Manchester City striker Edin Džeko to pull one back, before James Milner’s inadvertent hand ball gave Diego Perotti the opportunity to slot home from the penalty spot, which he duly converted.

Full-time and job done for the Reds, but there was ultimately a feeling of ‘what might have been’ at the final whistle.

Liverpool boss Jurgen Klopp has confirmed that his side will be without key quartet Emre Can, Joel Matip, Adam Lallana and Alex Oxlade-Chamberlain for the trip to the Stadio Olimpico.

Oxlade-Chamberlain, who was stretchered off early on in the first-leg, will miss the rest of the season, and this summer’s World Cup in Russia, after sustaining significant knee ligament damage.

Georginio Wijnaldum replaced the England midfielder, with the Dutchman expected to start in the heart of Liverpool’s midfield.

Roma on the other hand also have a few injury concerns of there own, as they look to overturn their three goal deficit. Dutch midfielder Kevin Strootman will miss out through injury, while first-leg goalscorer Diego Perotti is reportedly struggling. 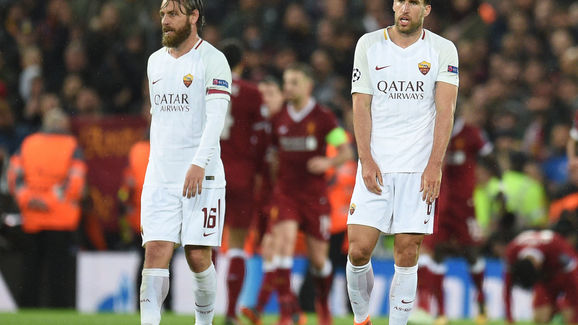 Cengiz Under’s place could come under threat as Roma go searching for goals, with Patrik Schick his most likely replacement. Stephen El Shaarawy could also come into the side after finding the target in the weekend win over Chievo..

Roma will need to pull off a second miracle in a matter of weeks if they are to progress to a historic first Champions League final.

Regardless of the result, it has been an incredible run by Eusebio Di Francesco’a side thus far, having far exceeded pre-competition expectations. Their second leg performance against Barcelona will live long in the memory, and will be used as a source of inspiration ahead of this one.

Liverpool will be acutely aware of what happened in Rome a couple of weeks ago, though  Jurgen Klopp is expected to continue with his attacking philosophy despite the scoreline. Chances on the counter are likely to provide the Reds best opportunuties to score, with the pace of Mohamed Salah and Sadio Mane likely to cause a constant threat.

A single away goal for Liverpool could kill the tie early on, though Roma will be expected to throw the kitchen sink at them. All things considered, it’s hard to look past the Reds to qualify.