Arsenal youngster Reiss Nelson has agreed a new five-year deal with the club after impressing in pre-season. The forward recently netted in a 2-0 win over Lazio and could be set to join the first team as of next season.

Nelson joined the Gunners at the age of seven after being scouted by the club whilst playing for Lewisham Borough. The forward has risen through the academy ranks ever since and could be set for a breakout campaign after signing an extended professional contract.

The 18-year-old made his professional debut for Arsenal in the Community Shield last season. He followed it up with a first Premier League appearance in January, coming on as a late sub in the 4-1 win over Crystal Palace.

He was awarded the Premier League 2 Player of the Year award at the end of last season for his impressive displays in the Arsenal youth team. Nelson scored 10 goals in PL2 and became a prominent player throughout the campaign as Arsenal won the league. 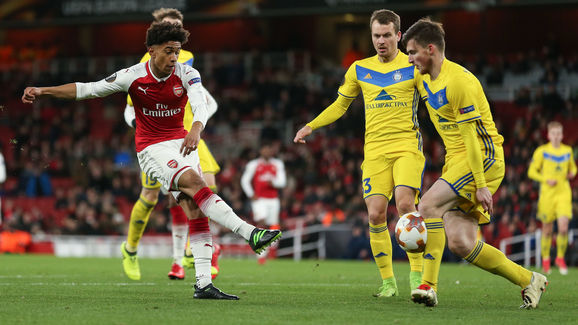 His performances earned him a call-up to the Europa League squad, making eight appearances as he also helped the first team to a European semi-final. Nelson proved a hit amongst fans last season but with his contract up next summer there had been little word on his future up until now.

Rumours began to emerge that Nelson was holding the club to ransom with his wage demands and fans feared the starlet could depart the Emirates prematurely.

Whilst a deal has still not yet been officially announced by Arsenal, The Sun journalist Dan Cutts has tweeted that an agreement is in place between the player and the club. That deal is believed to be a new five-year contract which Cutts revealed exclusively on his Twitter feed.

His wages are believed to be in the region of £25K – £30K per week, reflecting similar deals agreed for Alex Iwobi and Krystian Bielik upon their emergence from the academy in recent seasons.

Arsenal kick off the new Premier League season with a tough tie against last year’s champions Manchester City on Sunday.