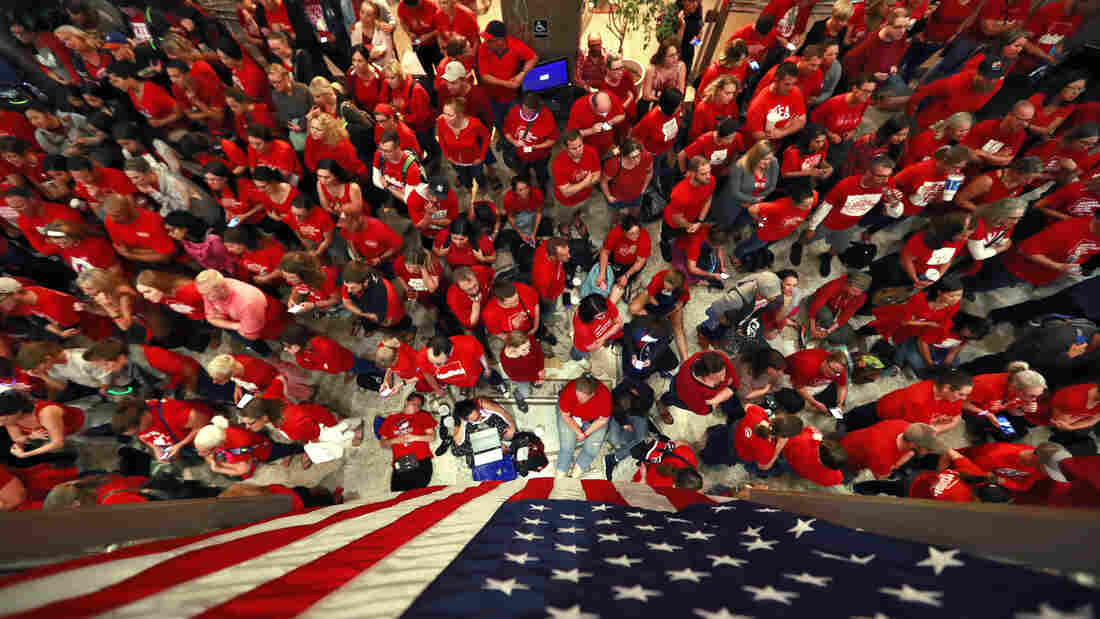 Teachers packed the lobby of the Arizona Capitol in Phoenix in the wee hours of Thursday morning, as lawmakers debated a budget that gives teachers big raises but falls short of their demands for better school funding. Matt York/AP hide caption 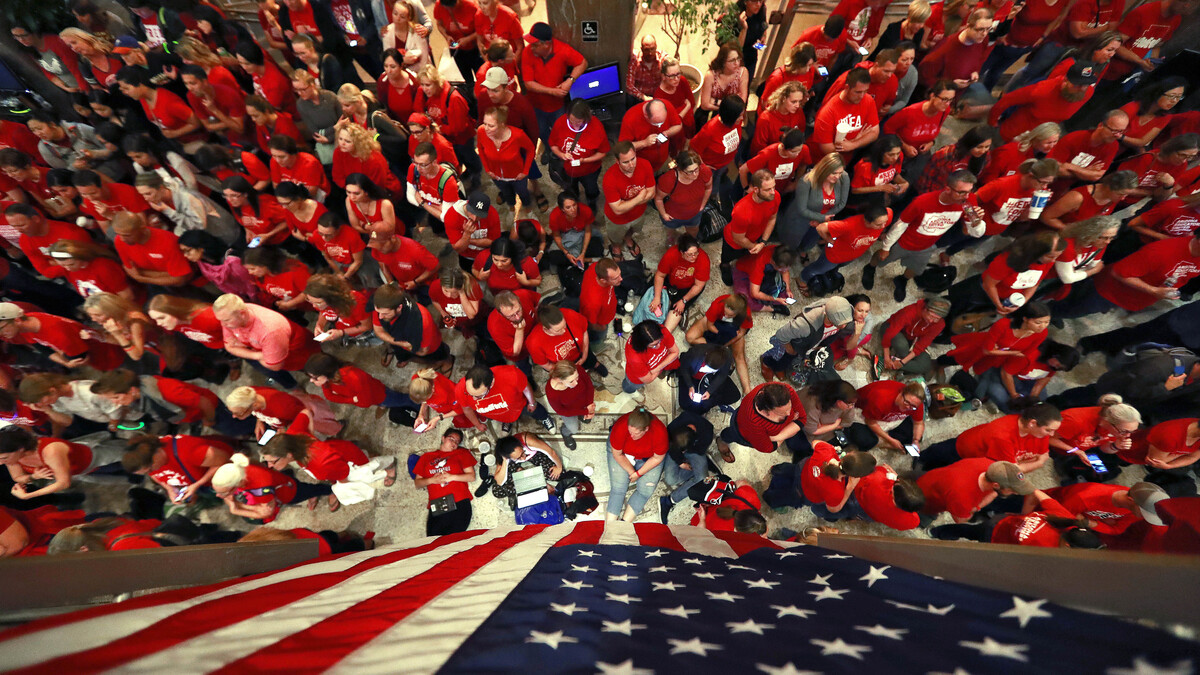 Teachers packed the lobby of the Arizona Capitol in Phoenix in the wee hours of Thursday morning, as lawmakers debated a budget that gives teachers big raises but falls short of their demands for better school funding.

The wide lawns outside the state Capitol appeared Thursday morning much as they have for about a week: overflowing with a sea of educators, clad in red and toting bold-lettered signs.

Yet the mood among the crowd of teachers who had walked out of their classrooms — for so long seeped through with frustration and anger — showed tinges of a different feeling altogether: joy.

That’s because after 13 hours of floor debate, state lawmakers passed a budget overnight that included a pay raise for teachers — one of the central demands levied by educators during their massive statewide walkout. The protest’s leaders had promised earlier this week to head back to class if the raise was signed into law, despite their reservations about how that pay bump would affect school funding.

The measure, which would lift teacher pay by 20 percent by 2020, now has that long-awaited signature.

“This is a real win for our teachers, for our kids, for our educators in the classroom, and we’re grateful for your help in getting this over the finish line,” Republican Gov. Doug Ducey said in a video filmed in his office around dawn, before signing his name. “It’s a good way to start the day.”

And teachers made good on their promise.

“We will return to our schools, classrooms, and students knowing that we have achieved something truly historic. We should take pride in what we have accomplished, and in the movement that we have created together,” the state’s teachers union, the Arizona Education Association, tweeted hours later.

The fact that the raise has been codified, however, does not mean the union and fellow protest leaders are satisfied. Besides the pay bump, the Arizona Educators United grass-roots group had also demanded smaller class sizes and moves to raise the state’s average teacher salary by roughly $12,000 to bring it in line with the national average — demands that remain unmet.

“Each and every one of us needs to remain so devoted to this cause,” AEU organizer Noah Karvelis told thousands of demonstrators Thursday, pointing at the Capitol near the stage where he stood. “And I can tell you, I have never felt so devoted to this cause as when I sat in that building and saw them ignore our voices, and saw them vote down amendment after amendment that would have made our schools incredible.”

It was partly the failure of those attempted amendments during the overnight negotiations — including one mandating reduced class sizes — that Ducey’s colleagues across the aisle rejected the bill.

“Democrats absolutely support a 20 percent raise for our educators. However, without a new, dedicated and sustainable revenue source, this proposal for a pay increase for educators will not be sustainable through 2021,” state House Minority Leader Rebecca Rios said in a statement released by the party after the signing.

“We need to face the truth,” the Democratic lawmaker added. “Arizona cannot make up the billion dollars we’ve cut from our schools with the revenue stream we have now.”

With the bill still in doubt as the sun set Wednesday, several dozen school districts decided to stay closed Thursday. A handful announced after the bill’s passage that they would be reopening their doors Friday — though many appeared to remain undecided as they waited for clarity on when their teachers would return.

John Shovestull, for one, said he is ready to resume classes — partly because the algebra teacher had been back in his classroom several times anyway, even while participating in the walkout.

“I really hated being out of my classroom,” he told the Arizona Republic, “so I’ve been going in at 3:30 in the afternoon to give students the chance to come in and get caught up.”

Shovestull added that he is looking forward to carrying their demands forward toward elections in November — a sentiment the union echoed in its statement, referencing the hashtag that’s become identified with the walkout.

“The #RedforEd fight continues. And since lawmakers aren’t getting the job done, we will,” the union said. “Today, we will rally at the Capitol. And over the next few days we will provide additional details about next steps.”

“We’ve won the first battle,” Karvelis of AEU said at the rally, “but now we must win the war.”