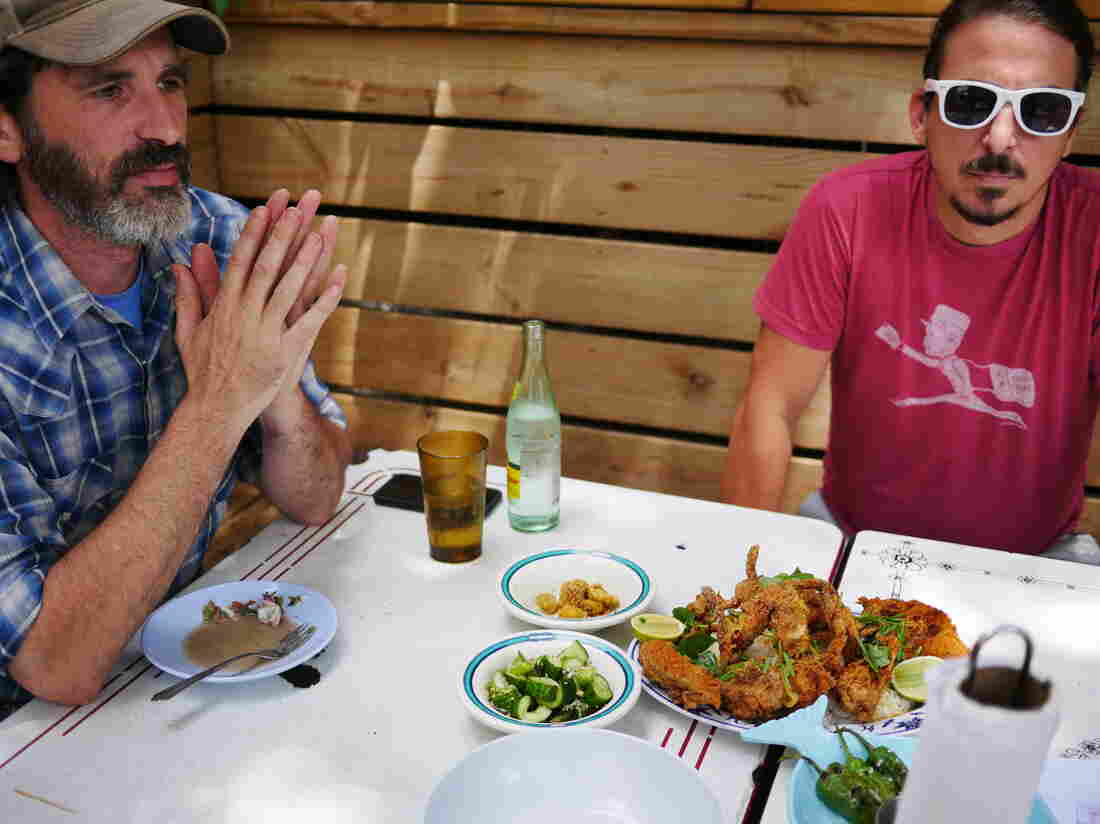 Toby Rodriguez (left) launched a career as a traveling butcher after he was featured on a 2011 episode of Anthony Bourdain’s No Reservations. Now he plans to open a restaurant in New Orleans with Barrett Dupuis (right) as general manager. Rodriguez says the late Bourdain was accurate and unflinching in his portrayal of Cajun country. Daniella Cheslow hide caption 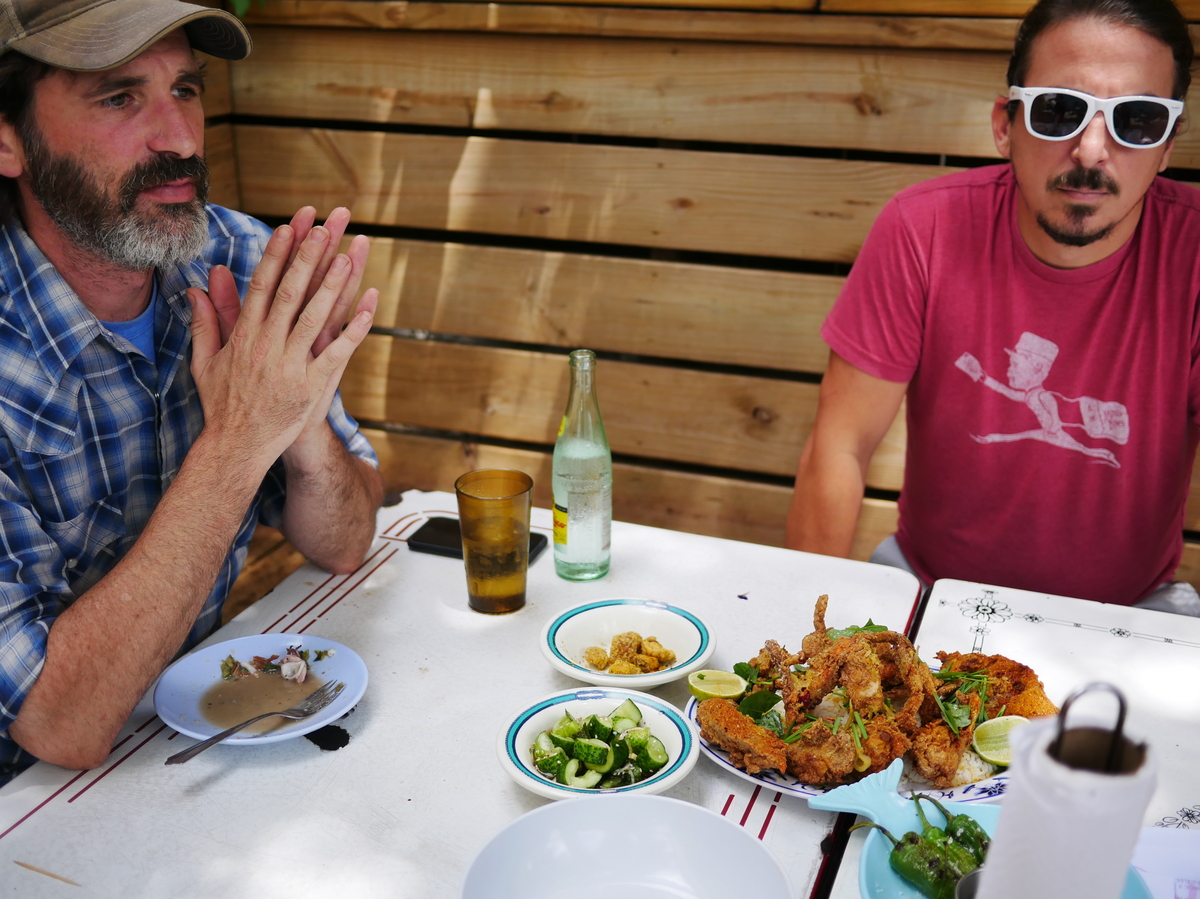 Toby Rodriguez (left) launched a career as a traveling butcher after he was featured on a 2011 episode of Anthony Bourdain’s No Reservations. Now he plans to open a restaurant in New Orleans with Barrett Dupuis (right) as general manager. Rodriguez says the late Bourdain was accurate and unflinching in his portrayal of Cajun country.

The turkey wings at Laura’s II in Lafayette, La., have been made using the same recipe for three generations. Madonna Broussard stuffs about 80 turkey wings with garlic and seasonings each afternoon, packs them into nine aluminum pans, then bakes the wings to give them a crispy bite that contrasts with the soft, gravy-soaked rice underneath.

On a recent afternoon she checked on the marinating turkey wings, passing by photos of Anthony Bourdain taped to her soda machine near the cash register.

In the days and weeks following the June 8 death by suicide of the TV host and chef, tributes have poured in from around the world. In South Louisiana, where Bourdain returned time and again, he is particularly mourned and beloved.

It was Broussard’s wings that Bourdain said drew him “like a heat-seeking missile” in one of the last episodes to air of his CNN show, Parts Unknown. In the episode, called Cajun Mardi Gras, Bourdain sits at a table in Broussard’s restaurant with “Creole Cowboy” Dave Lemelle, local musician and business owner Sid Williams and zydeco music historian Herman Fuselier. They discuss how black cowboys descended from African slaves and free men are believed to be the first American cattle herders in the plains and bayous of Louisiana. 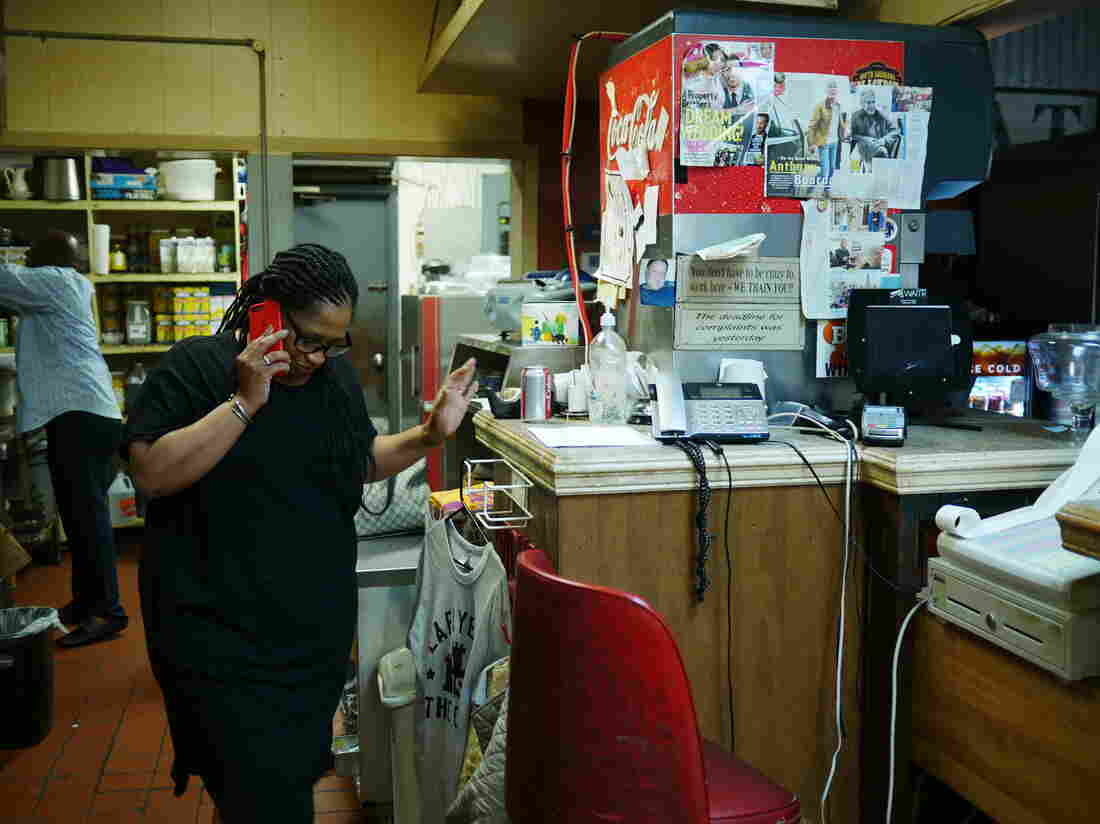 Madonna Broussard taped up a recent article about Anthony Bourdain’s travels to the soda machine in her restaurant, Laura’s II in Lafayette, La. Bourdain featured Broussard and her turkey wings in a recent episode of Parts Unknown. Danielle Cheslow hide caption 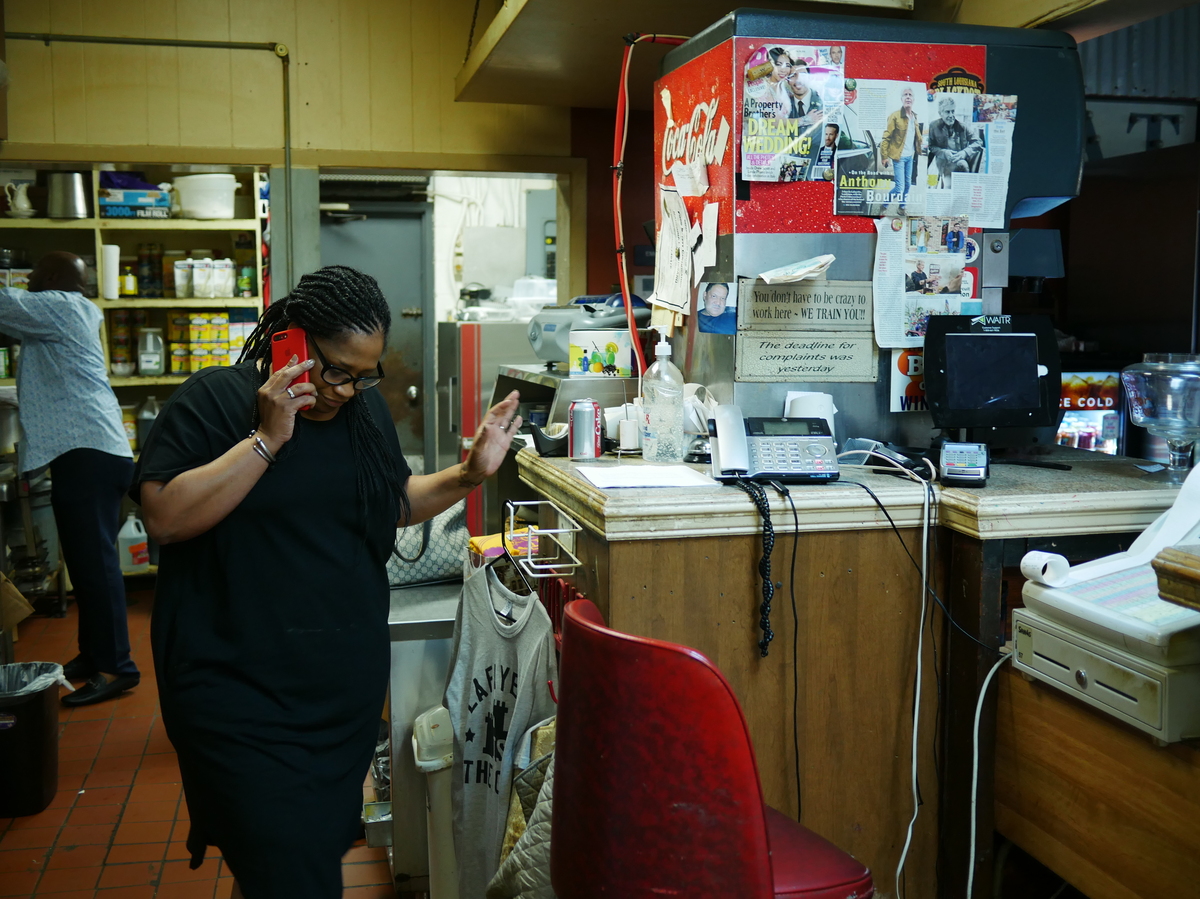 Madonna Broussard taped up a recent article about Anthony Bourdain’s travels to the soda machine in her restaurant, Laura’s II in Lafayette, La. Bourdain featured Broussard and her turkey wings in a recent episode of Parts Unknown.

Broussard screened the episode at her restaurant when it aired June 17; Lemelle and Williams joined and answered questions during commercial breaks. The 60 guests ate a dinner of fried chicken from Popeye’s Louisiana Kitchen. (Bourdain had described the outlet’s macaroni and cheese as “exotic,” Broussard says.) The evening had a somber cast, she says. 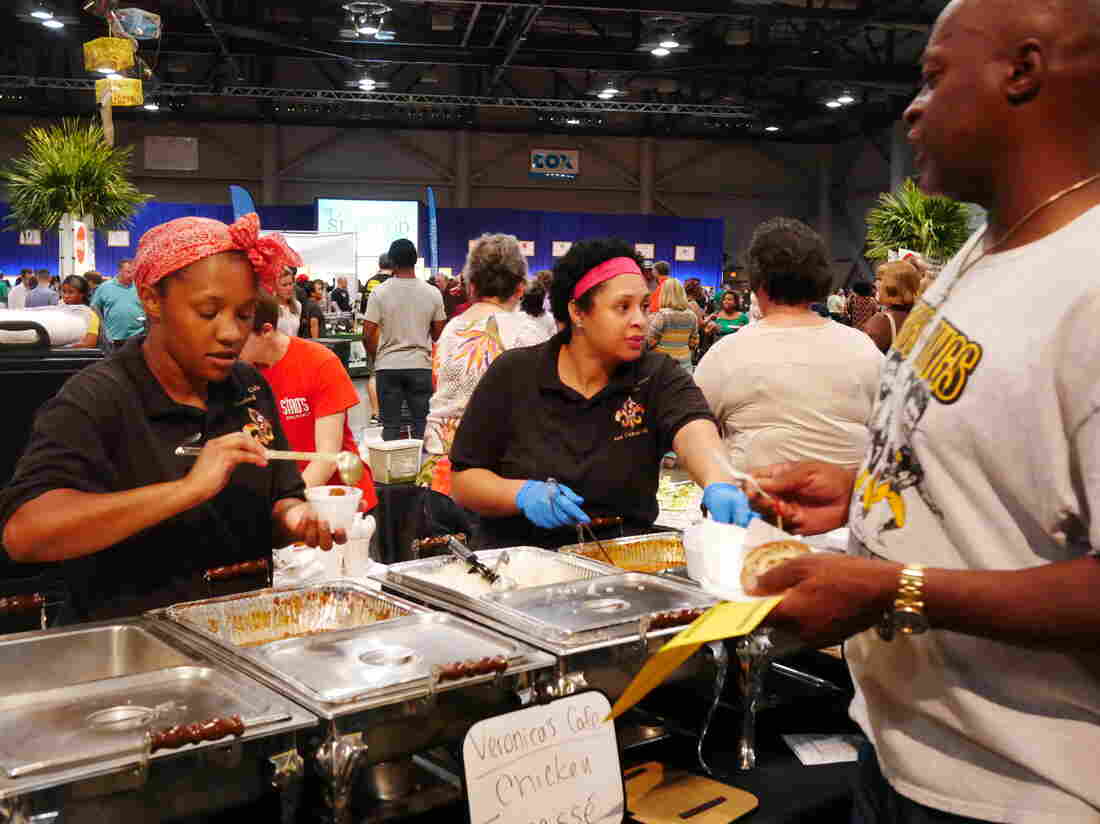 Restaurant workers dole out chicken fricasee at the “Taste of EatLafayette” festival in the sprawling Cajundome arena in Lafayette, Louisiana. Locals say Bourdain captured the subtleties of their culture and cuisine, even if at times he overemphasized alcohol. Daniella Cheslow hide caption 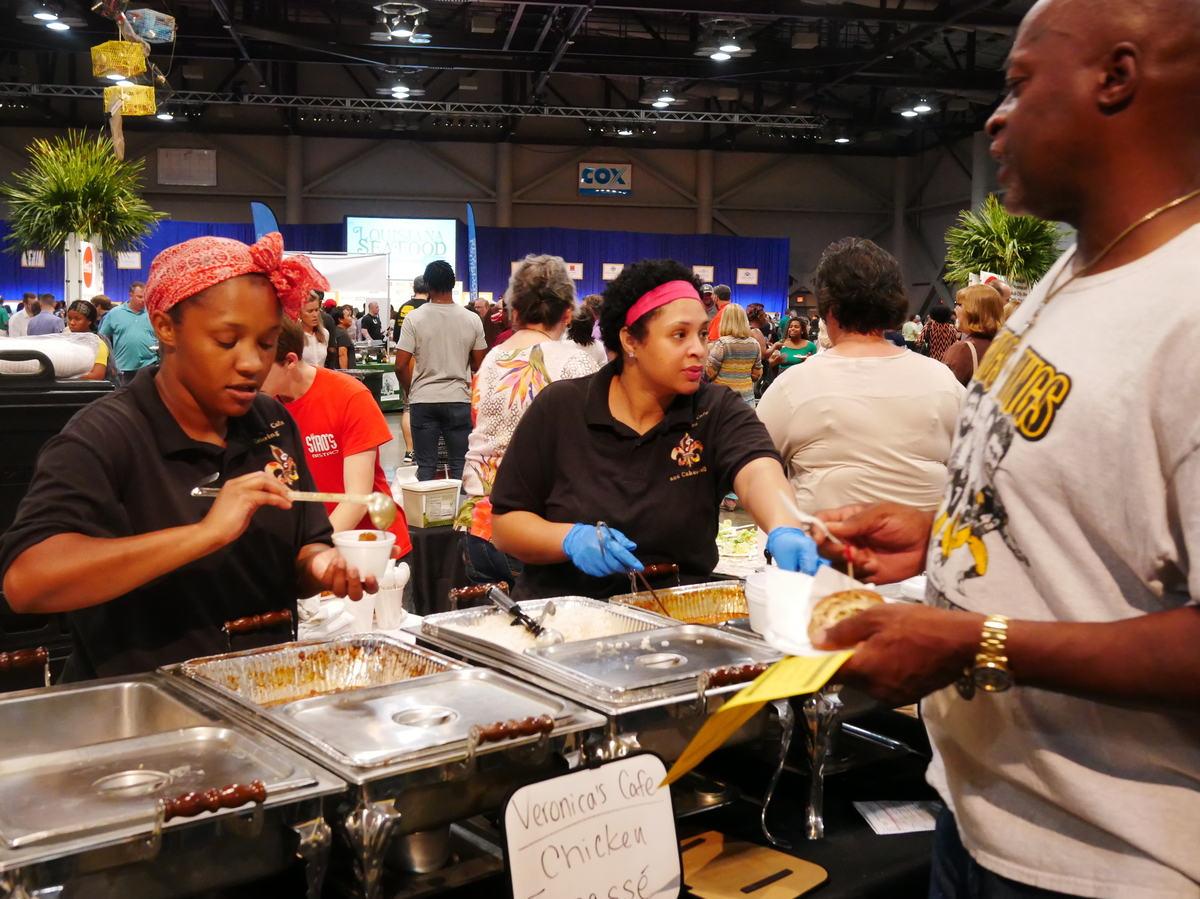 Restaurant workers dole out chicken fricasee at the “Taste of EatLafayette” festival in the sprawling Cajundome arena in Lafayette, Louisiana. Locals say Bourdain captured the subtleties of their culture and cuisine, even if at times he overemphasized alcohol.

“It was the reality of, ‘Damn, he is not able to watch,’ ” Broussard tells NPR. “But for him to cut through here …. just to have that person come here and say, ‘You guys, your food is good’ – that was an honor.”

Bourdain cherished southern Louisiana. His first foray was a 2003 episode of his early Food Network show, A Cook’s Tour. He was overfed at a “VIP” table in the bed of an old pickup truck outside Jacques-Imo’s Cafe. The owner rode with Bourdain, still seated, like battered royalty back to his hotel.

Bourdain returned to the area to film for each of his three ensuing TV series – in New Orleans in 2008 and 2013, Cajun country in 2011, and most recently, back in Lafayette. He captured a region influenced culturally and environmentally by generations of intermingling French, Africans, Native Americans, and Europeans.

“There are parts of America that are special, unique, unlike anywhere else,” Bourdain says on Parts Unknown. “Cultures all their own, kept close, much loved but largely misunderstood. The vast patchwork of saltwater marshes, bayous, and prairie land that make up Cajun country is one of those places.”

For his final episode from the region, Bourdain attended a Cajun Mardi Gras, which this year fell in February. In New Orleans, the Catholic holiday is marked with parades, parties, plastic beads and jazz music on the last day before Lent. “Ordinarily, I loathe the idea of Mardi Gras,” Bourdain narrates. “But Cajun Mardi Gras is another thing entirely — closer to the ancient French tradition, vaguely more dangerous, downright medieval.”

Bourdain goes to Mamou, La. — three hours west of New Orleans by car — for the notorious Mardi Gras run. Men (all the participants are men) cover their faces with elaborate masks, wear costumes from head to toe, drink themselves into a daze, then ride on horseback from house to house, chasing live chickens to cook in a holiday stew. The next day, Bourdain gets his forehead smeared with a cross for Ash Wednesday. “Got right with God,” he deadpans. “Let’s eat.”

But aside from highlighting the unique Cajun and Creole cultures of the area, Bourdain had a profound, direct impact on its people.

Take, for example, Toby Rodriguez. He is seen in the 2018 episode running the kitchen of an evening dance party known as a fais dodo. It’s part of a weeklong celebration before Mardi Gras. Seven years earlier, Rodriguez had appeared on Bourdain’s No Reservations, directing a boucherie — a day-long hog butchering. (“So much joy from one animal,” Bourdain exclaims.) After that episode aired, Rodriguez says, there was “an immediate tidal wave of attention and interest in this thing I didn’t think was that special.”

He launched a traveling boucherie business, loading handmade tools and cast iron cauldrons into a U-Haul truck and driving to clients in Washington state, Michigan, Texas, Missouri, North Carolina and Brooklyn. Two years ago, Rodriguez was invited to cook at Slow Food’s prestigious Terra Madre festival in Italy. “It was like time stood still,” Rodriguez says. Now he has plans to open an informal whole-animal restaurant in the Crescent City.

Rodriguez had been looking forward to updating Bourdain on his meteoric rise during the recent filming. But there was no time. “He was a bit removed, tired,” Rodriguez says. “I wondered how difficult it must be to be him.”

Lolis Elie, a journalist, food historian and screenwriter, worked alongside Bourdain on an episode of the HBO show Treme that focused on a working-class New Orleans neighborhood’s recovery from Hurricane Katrina. Bourdain wrote the character of cook Janette Desautel, who shuts her restaurant and heads to New York for a series of bruising jobs in top kitchens.

However, Elie says, “my respect for [Bourdain] is immense and unyielding” for an incident that happened off-camera. Elie says in 2011 he asked Bourdain to donate a signed book to raise funds for New Orleans chef Nathanial Zimet, who was shot and badly injured outside his home.

The attack came as Zimet and his business partner, James Denio, had just opened their restaurant, called Boucherie, after years of running a successful food truck business. Bourdain donated a stack of autographed books and a personal check for Zimet’s care, then appeared for dinner at Boucherie and stayed late to exchange stories with the cooks.

Zimet eventually recovered and returned to the kitchen. On a recent June morning, he sat at a picnic table in the sunny, humid open air and reviewed a new menu with his staff: ribs with spicy-fried okra; long-cooked yellow beet ravioli; duck with pickled blueberries. Zimet never met Bourdain but says his gesture touched him: “He said, ‘Hey, you’re not alone.’ “

Lafayette restaurateur Jacques Rodrigue says Bourdain “did a great job in showcasing our culture.” That included highlighting local produce instead of the usual food-media focus on the area’s deep-fried seafood, which is “not necessarily what everybody ate at home,” Rodrigue says.

Artist Chuck Broussard (no relation to Madonna Broussard) worries “that in general they overemphasized the amount of drinking in Louisiana. I would hate for people to think it’s all drinking.” Still, he concedes, “They got it right for that Mardi Gras event.”

But Rodriguez, the traveling butcher, says Bourdain was accurate and unflinching. Of the 2011 production, Rodriguez says, “it was the best representation ever done to date.”

“Every time that someone does something about Cajun country, about Acadiana, it’s comedic,” Rodriguez says. Bourdain’s take was different. “This was beautiful, it was serious, and it was intense. It was a romantic approach to representing who we are.”