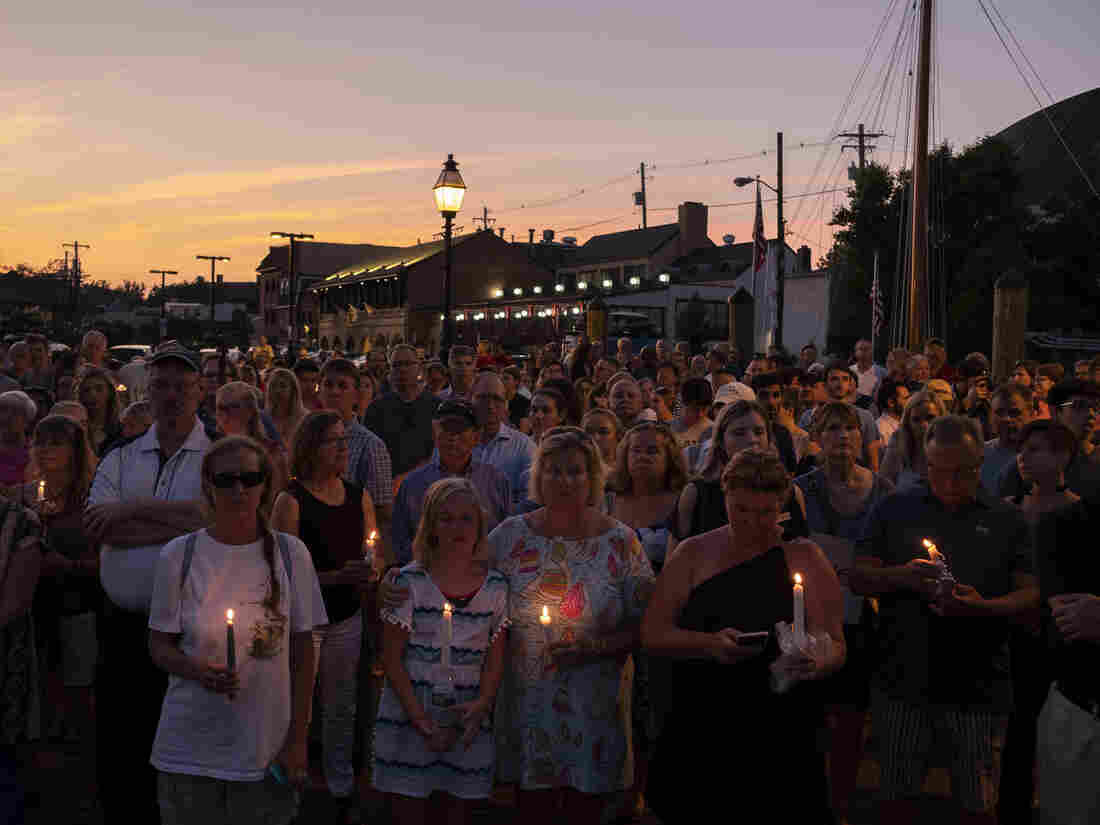 A crowd gathered in downtown Annapolis on Friday to honor five people who were killed in Thursday’s attack on the Capital Gazette offices. The Washington Post/Getty Images hide caption 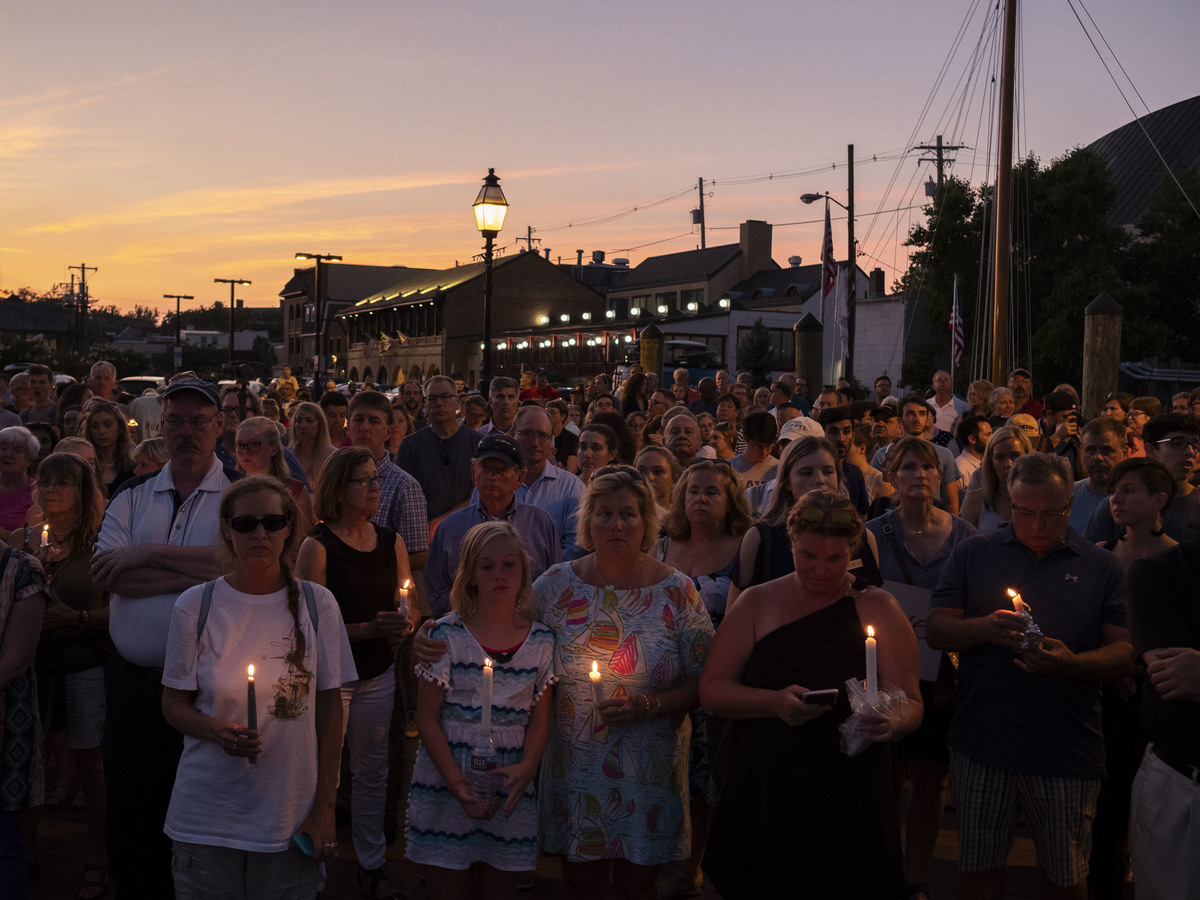 A crowd gathered in downtown Annapolis on Friday to honor five people who were killed in Thursday’s attack on the Capital Gazette offices.

The streets of Annapolis filled on Friday as people gathered to mourn the loss of five Capital Gazette employees, who were gunned down in their newsroom on Thursday.

The Maryland state flag was lowered to half-staff, and outside the building where the shooting took place, people left flowers, handwritten notes and American flags.

Some people gathered at the Unitarian Universalist Church of Annapolis to mourn the loss of a longtime member who was slain in the office.

A rendition of “Amazing Grace” on a bagpipe echoed through the crowded streets. Mourners carried signs that read “We are heartbroken” and “Annapolis Strong.”

“We are not the enemy,” Capital reporter Pat Furgurson told people who attended a candlelight vigil, sister publication The Baltimore Sun reported. “We’re you.”

Employees stood with their arms around each other, amid family members, friends and supporters.

Reporter Phil Davis took a microphone and read the names of colleagues who lost their lives in the gunfire. “The reason we want to say the names is because we are not going to forget them and we don’t want other people to forget them,” he said. 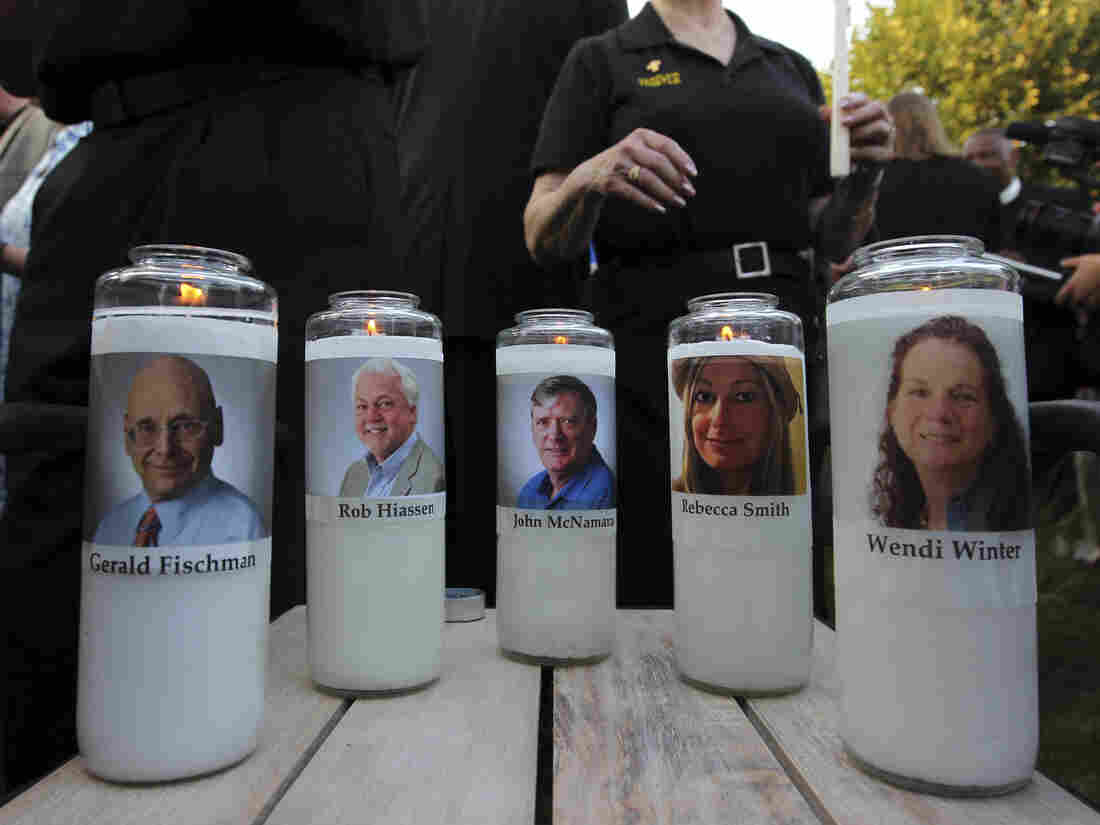 Photos of slain employees adorned candles at a vigil across the street from where they were killed in the newsroom. Jose Luis Magana/AP hide caption 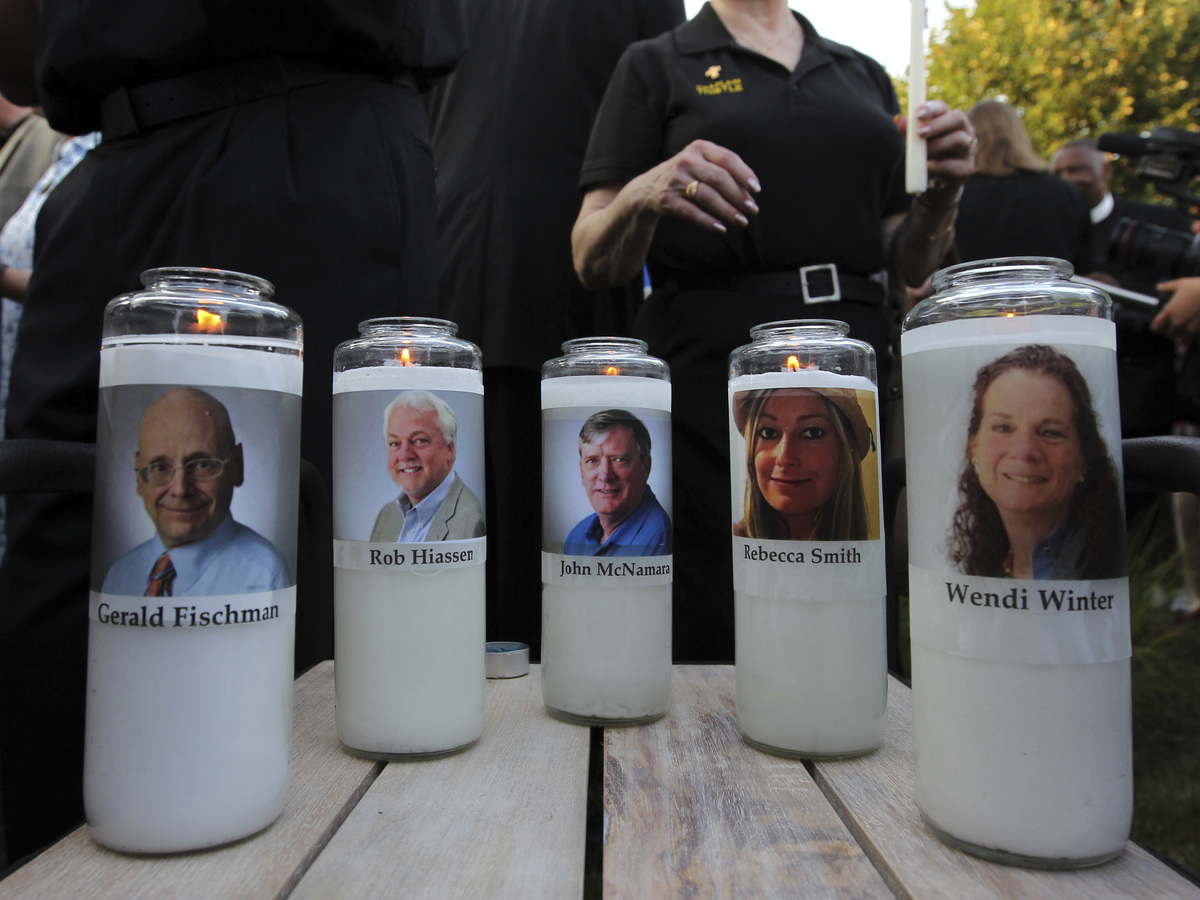 Photos of slain employees adorned candles at a vigil across the street from where they were killed in the newsroom.

“I talked to Rob [by phone] Thursday morning — he talked about a headline clarification,” Capital Gazette reporter Chase Cook told NPR. He was at home in Washington when the attack happened. “It’s two worlds now.”

He said the reality of Thursday’s attack hadn’t truly set in yet. The paper, like any publication, had amassed some disgruntled readers, he said, but “a lot of the times it was just people calling us ‘The Crapital,’ getting upset at how we portrayed anything. I don’t think anybody in their right mind, here or anywhere in the rest of the country, would think it would come to down this.”

The man charged with the attack, Jarrod Ramos, sued the newspaper in 2012 for defamation, then took his criticism to social media after his lawsuit was dismissed.

Police say he used a pump-action shotgun in the attack. He barricaded the rear exit of the building to prevent people from escaping, the Anne Arundel County state’s attorney says. Ramos faces five counts of murder.

Cook spent most of Friday at The Baltimore Sun, preparing the weekend paper with a colleague who survived the shooting. Then he headed to the sunset vigil in downtown Annapolis, near the water. “There were more people than I anticipated,” he said. “It was wonderful that they showed up.”

He added, “Wendy and Rob would have loved the vigils. They would have all been there if it was us.”