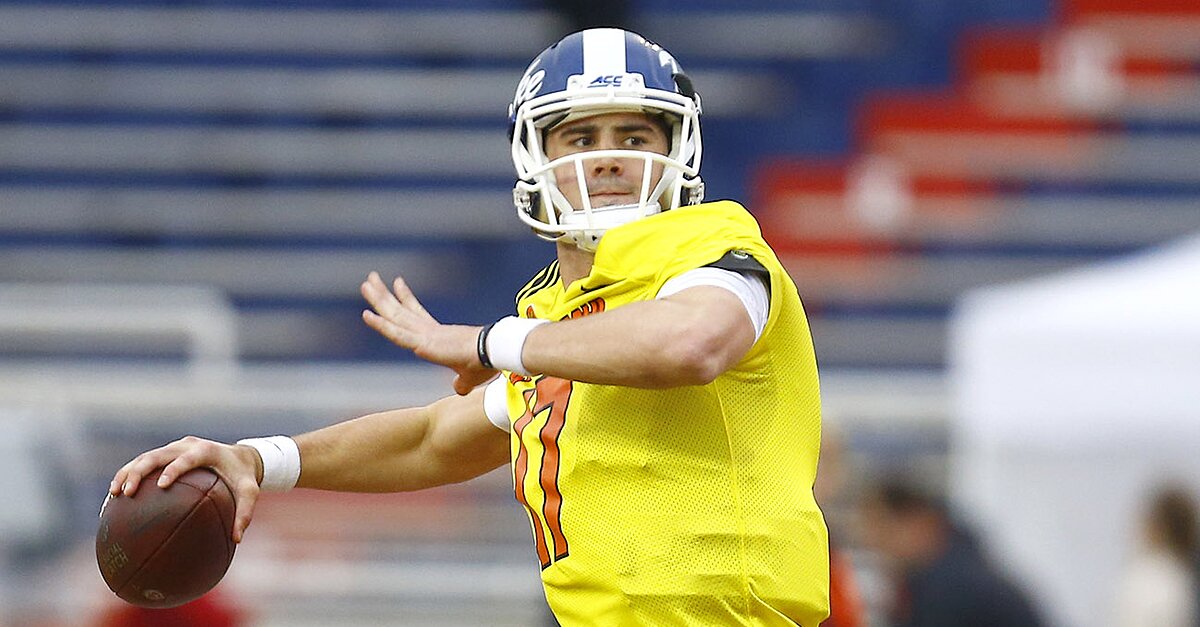 MOBILE, Alabama — The first day of Senior Bowl practices didn’t shed too much light on a deep quarterback group led by Duke’s Daniel Jones and Missouri’s Drew Lock. The eight QB prospects are still getting comfortable with the plays, so it’s hard to judge who has the edge. But it was clear that Buffalo’s Tyree Jackson, a last-minute add, had the slowest start among the bunch. There was an audible gasp among the scouts at Tuesday morning’s weigh-in when Jackson was measured at 6′ 7″, but his first practice wasn’t impressive as his size.

One evaluator I spoke to said N.C. State quarterback Ryan Finley had the best technique and quickest release of them all, followed by Lock. This alone won’t shoot Finley to the top of the draft class, but his and Lock’s mechanics stood out compared to the six other quarterbacks who have a slower and elongated release.

Here are the prospects, including Jones and Lock, to keep an eye on this week:

Daniel Jones, QB, Duke
Jones has a lot to prove this week. Evaluators recognize he played with average receivers and a weak offensive line at Duke, so they’ll be watching to see how he performs with an upgrade in talent. In his press availability Tuesday morning, Jones told reporters he received a first-round grade from the college advisory committee, and Raiders head coach Jon Gruden, who is coaching the North Senior Bowl team that features Jones, also said he’s a first-rounder.

If Jones really impresses in practices and the game, he might be able to overtake Dwayne Haskins for the top quarterback spot. Scouts have real concerns about Haskins’s single year of starting experience, whereas Jones was a three-year starter.

Jones rejected questions about his perceived lack of arm strength, which is the main trait scouts will be watching for. He struggled early in practice Tuesday, but eventually found a rhythm throwing to short and intermediate areas of the field. Probably his best throw of practice was this nicely placed throw to tight end Tommy Sweeney.

Drew Lock, QB, Missouri
Lock wasn’t perfect Tuesday, but he impressed with a spot-on deep ball to Ohio State receiver Terry McLaurin (who also had a good day). Lock also made a nice far-hash throw that hit the receiver in the hands but was dropped. Jones and Lock are both on the North team, which may have been a strategic decision to give NFL teams the chance to see them throw back to back.

Andy Isabella, WR, UMass
Isabella said Tuesday that he’s run a hand-timed 4.26 forty and is training for the combine with Randy Moss. That ridiculous speed was there in the first practice. He showed off quick feet, gaining separation several times. Isabella did have a couple drops in one-on-ones, but also generated yards after catch in team drills.

Renell Wren, DT, Arizona State
Wren’s length is his biggest asset. He battled North offensive linemen with his 33¾-inch arms, and can be a disruptive force with developing pass-rush technique. He showed off his club and chop move in Tuesday’s practice.

Khalen Saunders, DT, Western Illinois
The Western Illinois defensive tackle chose to stay at the Senior Bowl after finding out Monday night that his fiancée was going into labor with their first baby. “There’s no doubt if I love this game or not,” he said Tuesday morning at the podium, a few hours before the first practice of the week. Saunders made the business decision to stay because, as a small-school prospect, he believes he needs the visibility from participating in practice—his fiancée, Ayanna Hall, signed off on it, and even insisted that he stay. Less than an hour after wrapping up practice, Saunders tweeted to announce the birth of his daughter Kambridge Vonyea Saunders.

On the field, Saunders made the most of his practice and put on a show in one-on-one reps against highly touted Wisconsin o-linemen Beau Benzschawel and Michael Deiter. He bull rushed Benzschawel and then spun out of Deiter’s grasp. He finished with a “sack” of Penn State quarterback Trace McSorley in team drills. And he even performed his now-viral big boy backflip at the end of practice.

One scout said he’ll be surprised if Saunders gets past the third round of the draft, because he was totally dominant in his game against Illinois, the Leathernecks’ lone FBS opponent of the season.

Donald Parham, TE, Stetson
Parham makes this list because of his jaw-dropping measurables. He came in at 6′ 8″, 243 pounds at the weigh-in. He towered over everyone on the field, and though he’s still skinny in his lower half, he appears to be focused on bulking up—he’s added twenty points from his listed weight in college. Parham had a couple good catches in the first practice, though there were moments when it looked like he wasn’t properly using his size as a force to fight for extra yards. His rare size alone has generated interest from teams.