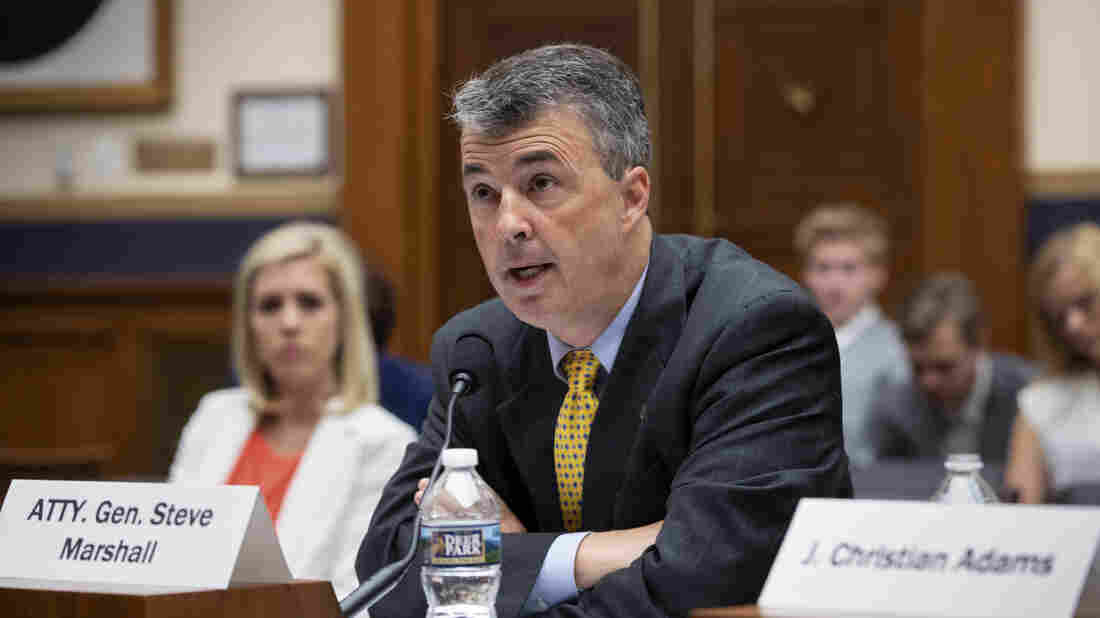 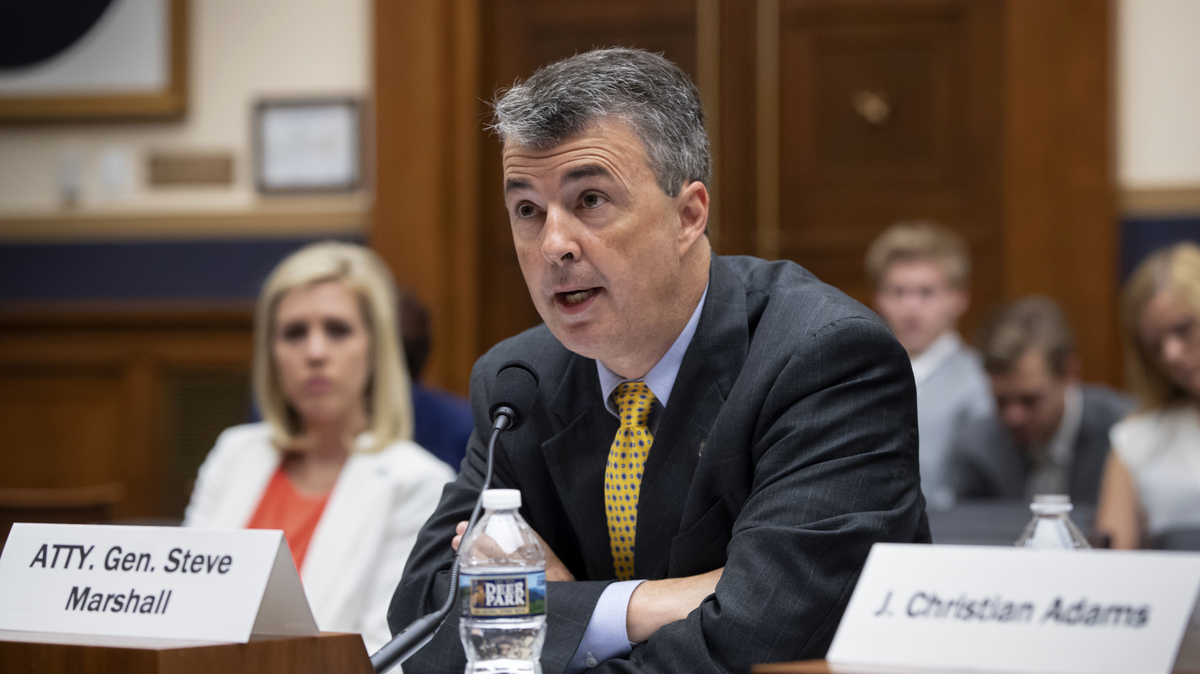 Alabama Attorney General Steve Marshall, pictured earlier this month on Capitol Hill, spoke Wednesday about the recent suicide of his wife after a long struggle with depression, chronic pain and opioid dependence.

“This is tough,” Attorney General of Alabama Steve Marshall said through tears on Wednesday as he stood at the lectern of his hometown Baptist church in rural Alabama, facing news cameras and dozens of people, three days after the sudden death of his wife, Bridgette Marshall, 45.

The cause, Marshall said, was suicide. But that was not his focus.

“What we want to be able to focus on is the story of her life,” he said flanked by family members, who sometimes stood with their heads bowed, quietly crying.

In fact, he said he was “forced to be here today” after his family had come across news accounts describing his wife’s death Sunday in Tennessee.

Marshall said those reports angered him. But then he and his family came to a realization.

“Maybe being transparent about how we got to the point where we did last Sunday could be helpful,” he said. “Because we know that we are not the only family that has had to deal with a family member who’s suffered from mental health issues. And we know that Bridgette is not the only person that ever considered suicide.”

Marshall began by describing his wife’s suffering from debilitating migraines from an early age.

She sought medical help and was eventually prescribed Oxycodone, then Fentanyl — “an amazingly powerful drug,” he said.

Again, she sought help and went to inpatient treatment.

“But even to the time of her death, (she) did not always handle her medication the way that she should,” Marshall said. “It’s one reason why, professionally you hear me talk about opioids, it’s personal.”

In recent years, Alabama has ranked first in the nation per capita for opioid prescriptions. In 2016, there were 121 prescriptions per 100 people, according to a council report. That’s more than one prescription for every man, woman and child in Alabama.

The Council — and Marshall — are working to stem those numbers through a multi-pronged approach that includes prevention, treatment and community response.

Still, as the report concedes, substance abuse disorders are complex.

Under the Trump administration, the Department of Justice has made the national opioid epidemic a centerpiece issue.

On Thursday, Attorney General Jeff Sessions announced progress the DOJ has made in a nation-wide “opioid takedown” related to health care fraud.

Since January 2017, more than 400 doctors and other medical personnel have been charged with opioid-related crimes, according to Sessions. 16 of those doctors prescribed more than 20.3 million pills illegally.

Marshall did not go into details about his wife’s history of opioid use.

The Centers for Disease Control notes that substance abuse can be a contributing factor to suicide.

Earlier this month, the CDC released stark figures about suicide, saying rates have risen in nearly every state in recent years.

Some 45 thousand people lost their lives to suicide in 2016.

Recent high-profile deaths ruled as suicides, including chef and television host Anthony Bourdain and designer Kate Spade, have also brought the issue to the forefront.

“Mental health conditions are often seen as the cause of suicide,” the CDC said, “but suicide is rarely caused by any single factor.”

In fact, many people who have taken their own lives had no diagnosed mental health conditions, according to the CDC.

Marshall said his wife also, “suffered from a depressive disorder and anxiety.”

He said that because she was anxious, being in the public eye was difficult and he wondered whether things would have been different if he hadn’t become Attorney General.

Bridgette Gentry Marshall was born June 6, 1973, in Boaz, AL, according to the obituary on the McRae Funeral Home’s web site.

She was a homemaker and worked as a hospice volunteer.

The funeral is scheduled for Friday.

Marshall said he felt compelled to make public the story of a woman who never wanted to be a public figure.

“And we don’t share that lightly, because it’s the most personal secret this family has,” he said.

“It is our hope today to share our story to also give strength to those families who have endured what we have endured, and maybe for that person who felt like (doing what) Bridgette did on Sunday morning, to know that there is hope and that there are people that love them.”

STATEMENT FROM THE OFFICE OF ALABAMA ATTORNEY GENERAL: We are saddened to report that Bridgette Marshall, wife of Attorney General Steve Marshall, passed away this morning after a long struggle with mental illness. (1 of 2)

Bridgette was a devoted and much beloved daughter, wife and mother. We ask that the people of Alabama keep the Marshall family in their prayers during this most difficult time. (2 of 2)