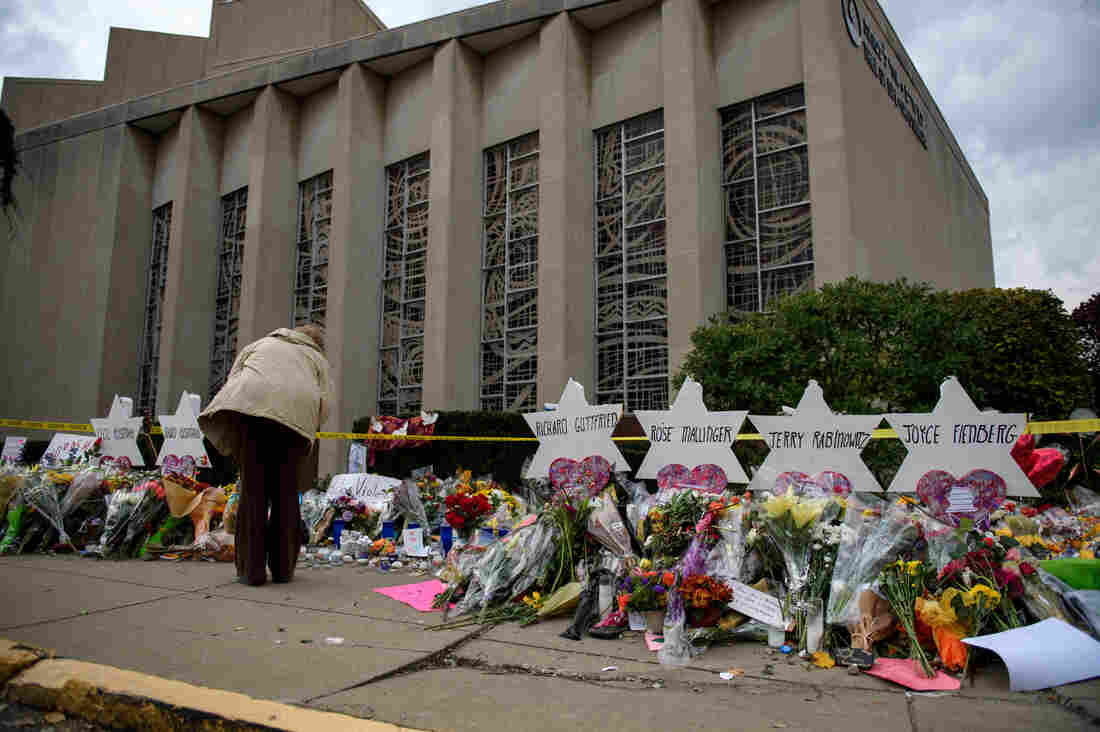 Eleven people were killed in a mass shooting at the Tree of Life Congregation in Pittsburgh’s Squirrel Hill neighborhood on Oct. 27. Jeff Swensen/Getty Images hide caption 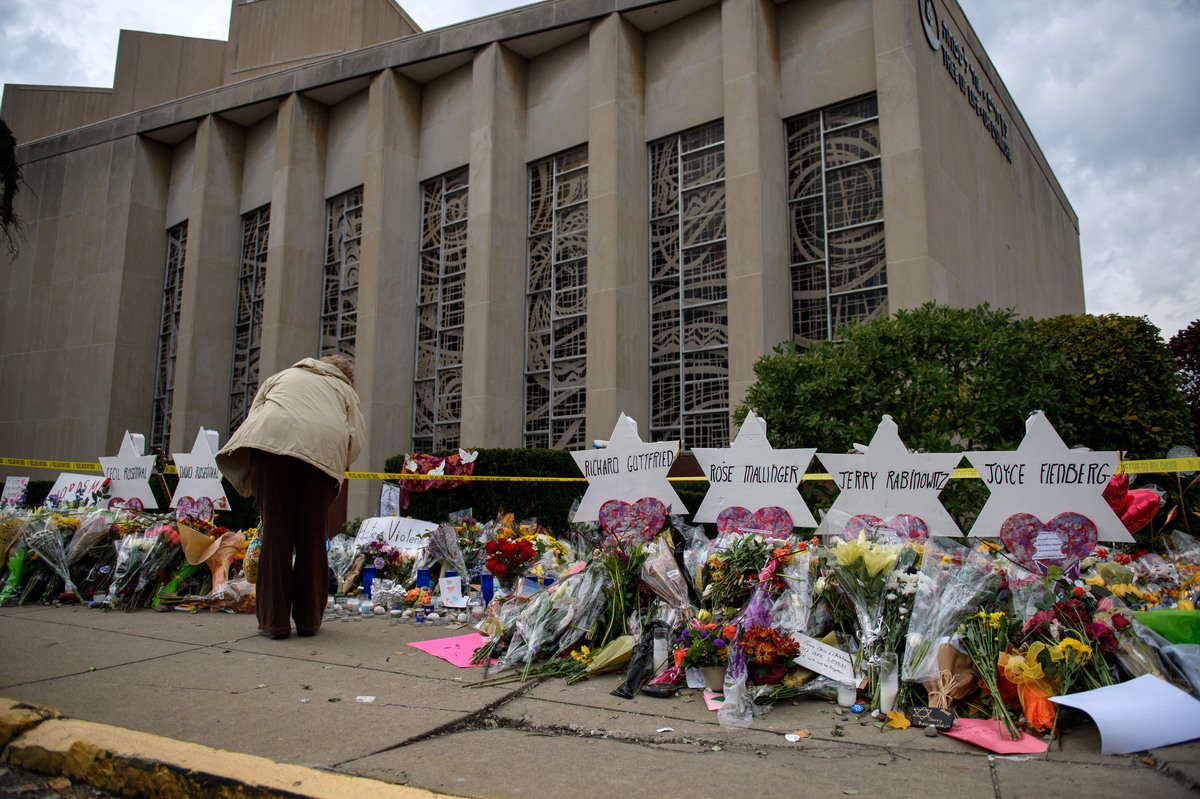 Eleven people were killed in a mass shooting at the Tree of Life Congregation in Pittsburgh’s Squirrel Hill neighborhood on Oct. 27.

Over the last few days, the Rev. Stanley Rivers has been clearing time in his schedule to thoughtfully respond to two troubling questions from his parishioners at Williams Chapel African Methodist Episcopal Church in Orangeburg, S.C.:

“How could a mad man walk into a place of worship and kill a bunch of innocent people again?”

They are challenging questions that leave him stuck in an awful loop. On the one hand, faith leaders are charged with ensuring that religious institutions remain welcoming spaces, and on the other, with implementing vigilant security plans to keep out danger.

Rivers, who has been an AME pastor for 20 years, was assigned to Williams Chapel last year but he says the 2015 shooting at Emanuel AME in Charleston, S.C., triggered a series of security updates throughout his Orangeburg church. The 2015 shooting left nine African American parishioners dead at the hands of a white supremacist.

“That could have been us. So, after that happened, that’s when we started to make changes,” Rivers told NPR.

The massacre on Saturday at the Tree of Life synagogue is a sobering reminder that violence “can always come to you,” regardless of well-planned safeguards, he added.

“The sad truth is that no matter what you do, there’s no guarantee that you’ll always be safe. But you have to prepare,” Rivers said.

To that end, the previous pastor’s first call was to Orangeburg’s Public Safety and Sheriffs departments. On their recommendations, the congregation has installed a new surveillance system that monitors the exterior and interior of the church, including the sanctuary and adjoining offices. More secure locks were added to all doors. On Sundays ushers and greeters serve as pseudo-security screeners for services — again, Rivers reiterated, walking the line between embracing newcomers and “keeping an eye out for anything suspicious.” And, once services begin the doors are locked with only one guarded door allowing entry into the chapel for any latecomers.

Most importantly, Rivers said, he remains in “direct communication” with local sheriffs and law enforcement officers. “They come in periodically and walk through the church and point out areas that we need to be concerned about.”

An appointed security team made up of volunteer church members attends semi-regular workshops hosted by local police to learn safety tactics for events within the church building and elsewhere. And he said, the sheriff and public safety departments donate “a lot of their time to patrol” the parish.

If the church could afford it, “we would have a paid security person here 24-7 but that doesn’t make sense on my budget,” Rivers said.

One step he has not taken is arming members of the congregation. However, he is “looking into it.” Rivers said there are liability issues the church’s insurance company has raised.

“Even then, I have some spiritual reluctance,” he admitted. “You don’t want to worship in a place where folks are toting .45s all over the place” because that sends the wrong message to the congregation, he said. “As a pastor, people are looking at you like, ‘Where’s the trust in God?’ ” he said with a heavy sigh, quickly adding, “But, you have to be a realist in the event that a sick dude does what he’s going to do.”

Imam Mohamed Almasmari told NPR the Muslim Community Association of Ann Arbor, one of the largest Islamic centers in Michigan, has had a hired armed security guard for years. A fact that was highlighted in a safety email advisory that was shared with members of the community following the Pittsburgh killings.

“It was a very big decision and a lot of people disagreed with me when it happened,” Almasmari recalled about giving the guard a gun. It’s taken years, but Almasmari said, “I don’t know of anyone who disagrees with the decision now. … Plus, the other mass shootings [around the country] helped them see that prevention is the best way to go with this.”

Seeking to assuage anxiety among the mosque’s congregants, the email noted:

“The threat of an active shooter attack is rare (an American’s lifetime odds of dying in a mass shooting committed in any location is 1 in 11,125; of dying in a car accident is 1 and 491; of drowning is 1 in 1,133; and of choking on food is 1 in 3,461) but the sad reality though is that it is also very real and the MCA has been proactive in aiming to eradicate the threat while preparing to improve chances of survival.”

Part of the center’s survival preparedness plan includes coordination with a specialized Ann Arbor Police unit that conducts active shooter training workshops. The most recent training occurred on Sept. 29. In October, the center hosted two training sessions on how to use “Bleeding Control” kits it received from law enforcement officials.

Almasmari, who described himself as “someone who doesn’t’ like to focus on bad things” reluctantly disclosed that the center, which includes a mosque as well as a weekday and weekend school, has been the target of a number of phone threats over the years. In his opinion, they are more annoying than they are terrifying.

“Some people call and cuss, some people are calling asking very descriptive details about the center, like, ‘Exactly what time is the Imam speaking?’ ” and other people “just say weird things,” he said.

While he’s not concerned about imminent threats to the mosque, Almasmari said a complete overhaul of the camera security system is in the works.

Patrick Fiel is a security consultant who works with churches and schools to reduce their risk of violent attacks. He told NPR an increased focus on security by faith leaders has led to high demand for services like his.

When he meets with potential clients, he said he spends a lot of time “reviewing the small changes they can make to boost security.”

“In fact,” he added, “probably the single most important thing anyone can do is to lock the doors once a service gets underway.”

That simple act is likely the factor that spared African American members of a Kentucky church last week when a white gunman killed two black shoppers at a Kroger’s grocery store. As NPR’s Laurel Wamsley reported:

“Police say that just a few minutes before heading to the Kroger, Bush first tried to get into the First Baptist Church of Jeffersontown, a predominantly African-American church. Jeffersontown Police Chief Sam Rogers told reporters that surveillance video showed Bush yanking on the church doors. If Bush had come to the church an hour earlier that day, some 70 people would have been gathered there, and the door might have been unlocked, the Courier-Journal reported.”

Fiel also encourages clients to swap out their existing locks with sturdier replacements or card-operated ones. He strongly recommends applying a high-tech security film over glass doors or windows. And if a house of worship is located at street level, he suggests adding concrete bollards outside the doors.

A pastor from a small North Carolina Pentecostal church told NPR he has met with Fiel over the last year and with approval from the church council, has implemented nearly all of his recommendations. The total cost, about $10,000, was “worth it,” he said.

The pastor asked not to be identified for fear of becoming a target.

The pastor said the church was motivated to act after 26 people, including several children, were killed in a shooting at the First Baptist Church in Sutherland Springs, Texas, in November of last year.

The Center for the Study of Hate and Extremism at the California State University, San Bernardino found hate crimes reported to police in the country’s 10 largest cities are up by nearly 13 percent. It is the fourth consecutive annual rise “and the highest total in over a decade.”

The Anti-Defamation League identified 1,266 anti-Semitic incidents in the U.S. in 2016, a surge of more than 30 percent from 2015. And data available for the first three months of 2017 showed 541 incidents, putting it on pace for more than 2,000 incidents over the year.

“Because of the history of violence and harassment and threats against the Jewish community, all Jewish institutions have these security plans,” Doron Ezickson, the head of the Anti-Defamation League’s regional office in Washington, D.C., told North Carolina Public Radio.

“All synagogues, all community centers, all preschools, all Jewish Day schools are forced, as part of their normal operative procedure, to train staff and to have procedures,” Ezickson said.

The Department of Homeland Security established the Nonprofit Security Grant Program in 2014 to “provide funding support for target hardening and other physical security enhancements to nonprofit organizations.” Funding for the program has more than quadrupled in the last four years, up to $60 million from $13 million.

Christopher Rodriguez, director of the District of Columbia Homeland Security and Emergency Management Agency told NPR, that is partly due to “an uptick in religiously motivated violence directed against mostly churches, synagogues and mosques in the last few years.”

“Most of it is not the tragedy we saw in Pittsburgh or in Charleston. It’s religiously inspired hate symbols like the swastika or white supremacist pamphlets are left at black churches,” Rodriguez explained.

On Monday, officials in the District of Columbia announced that nine religious institutions would be sharing nearly $1 million in grants to improve security.

Timing of the announcement, on the heels of the tragedy at Tree of Life, was coincidental, according to Rodriguez. Recipients submitted applications months ago.

Rodriguez, who helps guide nonprofits through the application process, said he and other regional directors around the country “are doing everything we can to spread the word.”

“We want our religious institutions to get this money and have all the tools they need to protect themselves. Then they can focus on being open religious facilities that by nature they should be,” he said.