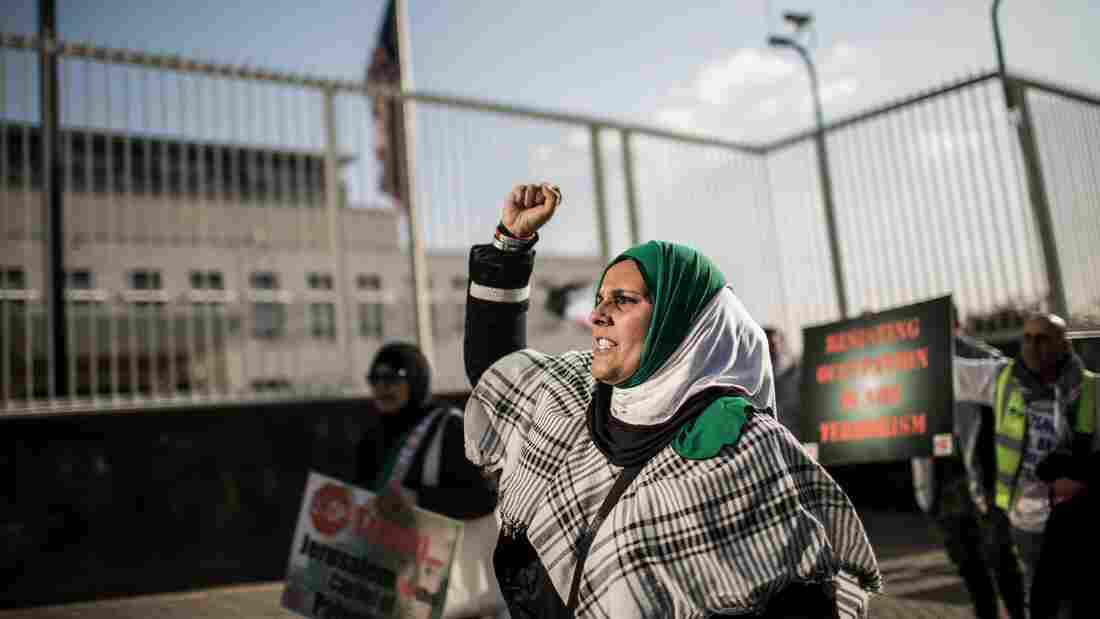 A pro-Palestinian protester raises her fist at a rally outside the U.S. Consulate General in Johannesburg on Tuesday. The South African demonstrators were just some of those who took to city streets to protest the killing of dozens of people along the Gaza border Monday. Gulshan Khan/AFP/Getty Images hide caption 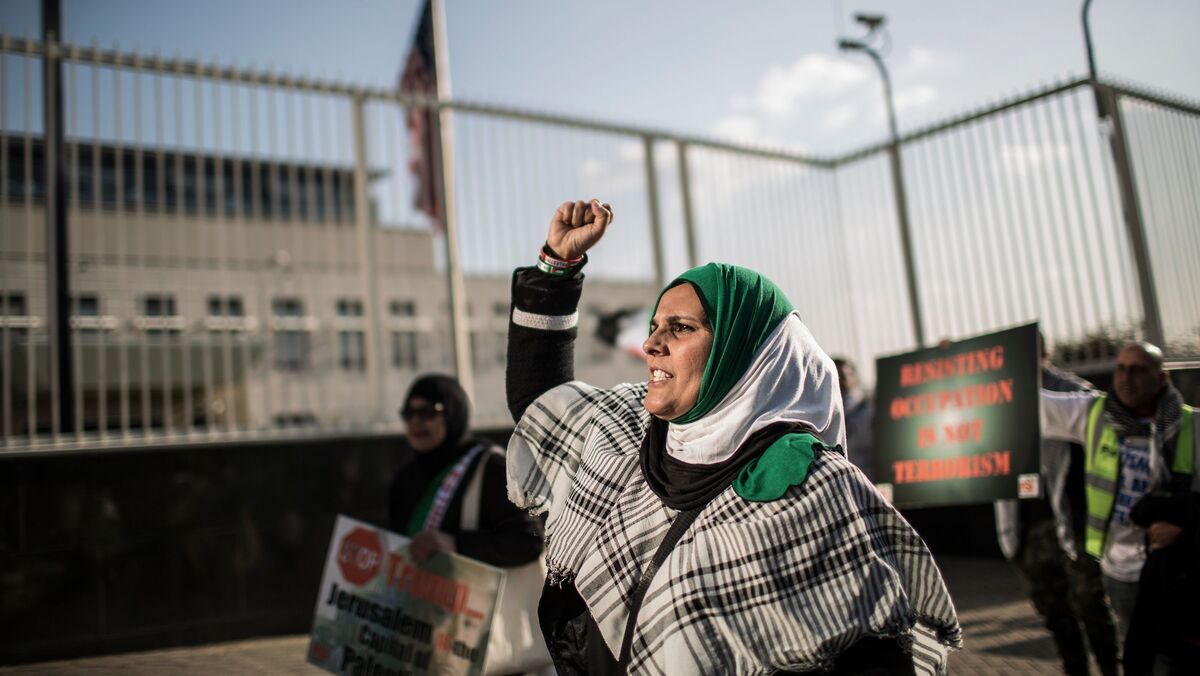 A pro-Palestinian protester raises her fist at a rally outside the U.S. Consulate General in Johannesburg on Tuesday. The South African demonstrators were just some of those who took to city streets to protest the killing of dozens of people along the Gaza border Monday.

Israeli forces killed at least 60 protesters and injured more than 1,000 on Monday, firing on demonstrators who had massed along its roughly 40-mile border with the Gaza Strip — but by Tuesday, the bloodshed’s political fallout had reached nearly every continent.

Several countries called for international inquiries, citing what the United Nations described as “appalling, deadly violence,” while others summoned Israeli diplomats to explain the security forces’ actions. From South Africa to Saudi Arabia, from Turkey to Guatemala, Israel was met with a mixture of condemnations, pleas for restraint — and, in some cases, open arms.

Meanwhile, at the U.N., where the Trump administration blocked a call for an independent probe on Monday, the Security Council opened its Tuesday session simply with a moment of silence for the dead. Then, the meeting quickly turned heated over the violence that unfolded Monday on the Gaza border as the U.S. dedicated its new embassy in Jerusalem.

“Who among us would accept this type of activity on your border? No one would,” U.S. Ambassador to the U.N. Nikki Haley told members, defending Israel’s response. “No country in this chamber would act with more restraint than Israel has. In fact, the records of several countries here today suggest they would be much less restrained.”

As NPR’s Michele Kelemen reports, Haley and her Israeli counterpart, Danny Danon, cast the unrest as the product of rioters and some militants who, in Danon’s words, were just using the embassy’s opening as “the latest in a series of Palestinian violence against Israel.” 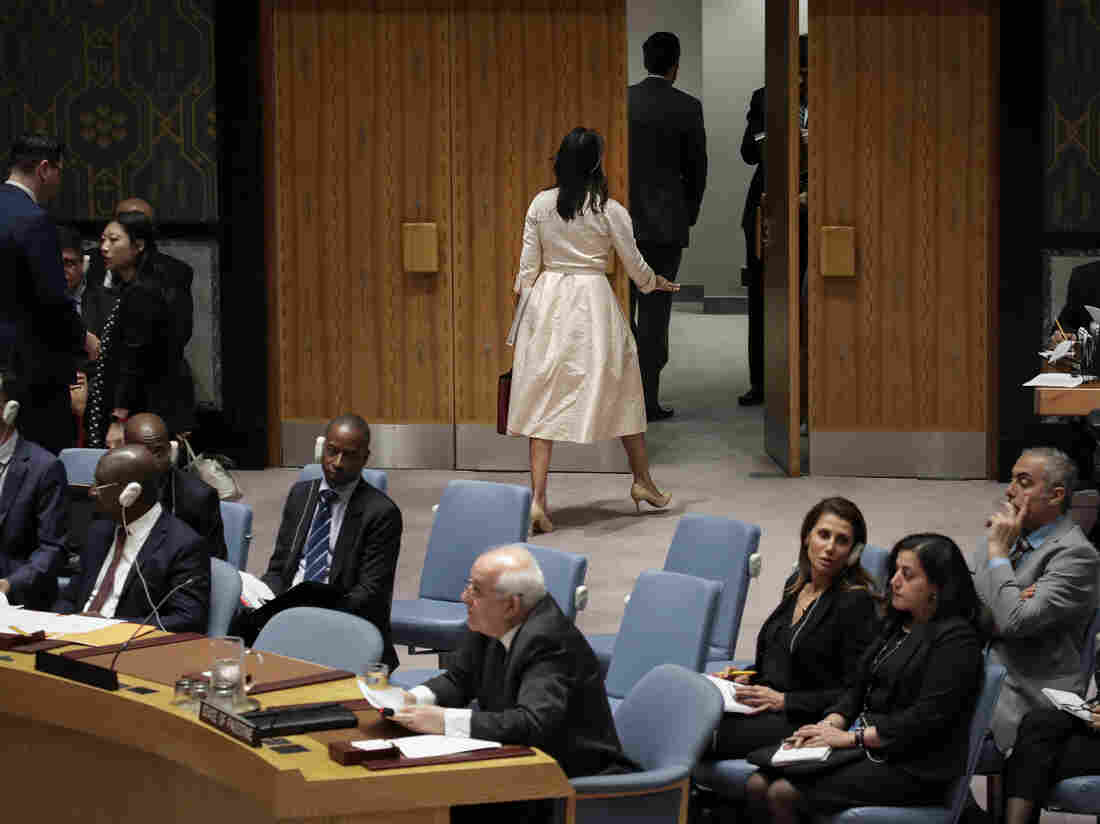 U.S. Ambassador to the United Nations Nikki Haley walks out as Riyad Mansour (bottom center), the permanent observer of Palestine to the U.N., addresses a Security Council meeting on Tuesday concerning the violence along the Gaza border. Drew Angerer/Getty Images hide caption 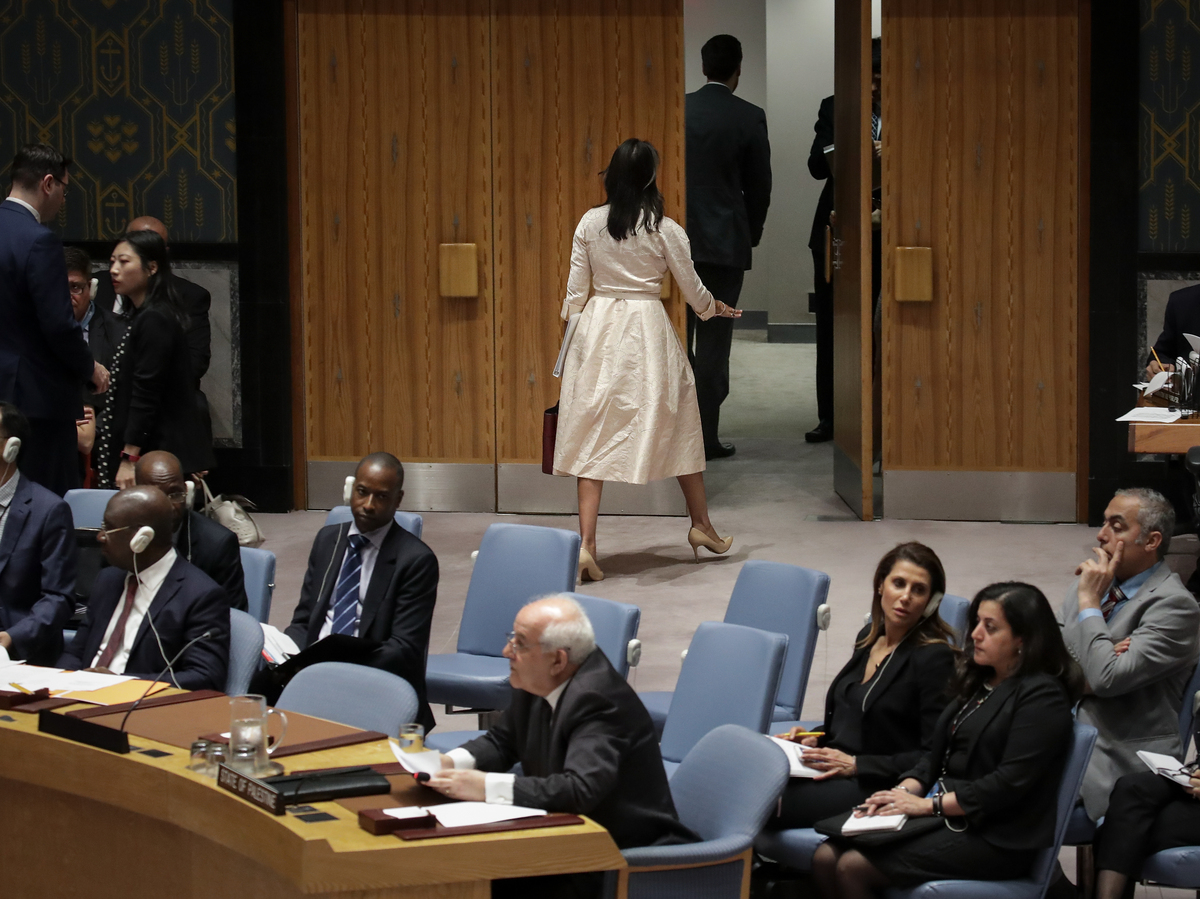 U.S. Ambassador to the United Nations Nikki Haley walks out as Riyad Mansour (bottom center), the permanent observer of Palestine to the U.N., addresses a Security Council meeting on Tuesday concerning the violence along the Gaza border.

Haley punctuated her comments by walking out of the chamber when the Palestinian ambassador to the U.N., Riyad Mansour, addressed the council.

But Kelemen notes that British Ambassador Karen Pierce expressed shock at the high death toll — and sounded a much more critical note.

“It is a familiar — depressingly familiar — pattern that we have seen over recent weeks, and it includes the deaths of children,” she said. “At a highly sensitive time in the region, we call for calm and we call for restraint.”

It is a sentiment that was echoed not simply in the U.N. chambers but across the world Tuesday, as many countries voiced their official, and at times visceral reactions.

Here is a brief collection of some notable responses. 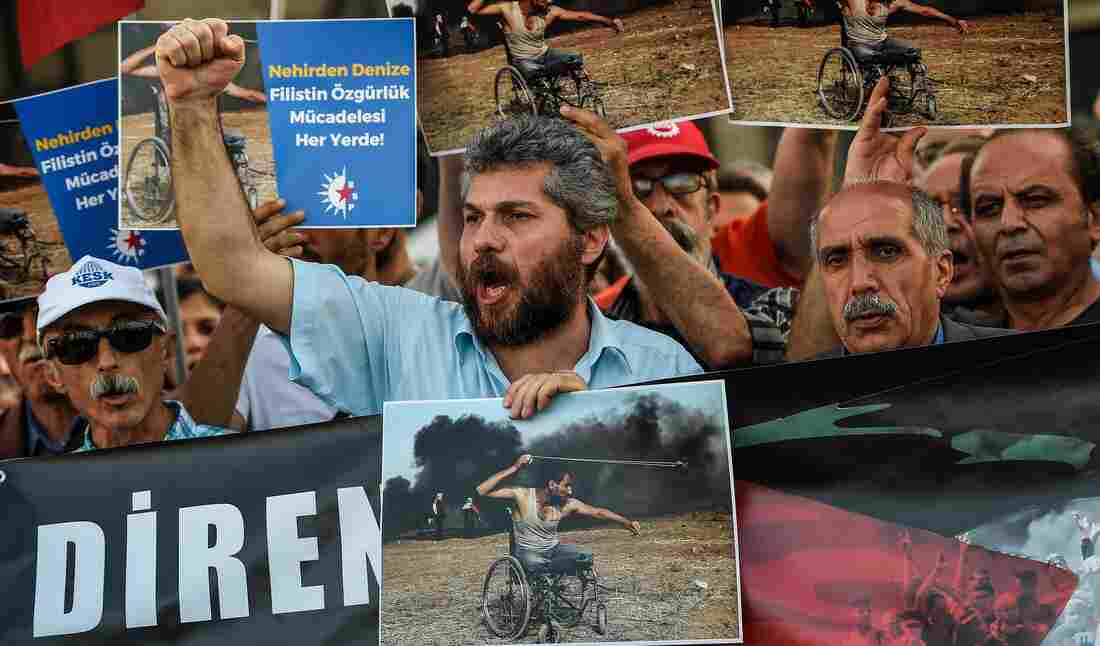 Turkish demonstrators bear signs proclaiming their solidarity with the Palestinians during a rally Tuesday in Istanbul. Turkey’s leftist opposition party called the demonstration to protest the killing, the day before, of dozens of Palestinians during clashes with Israeli security forces. Yasin Akgul/AFP/Getty Images hide caption 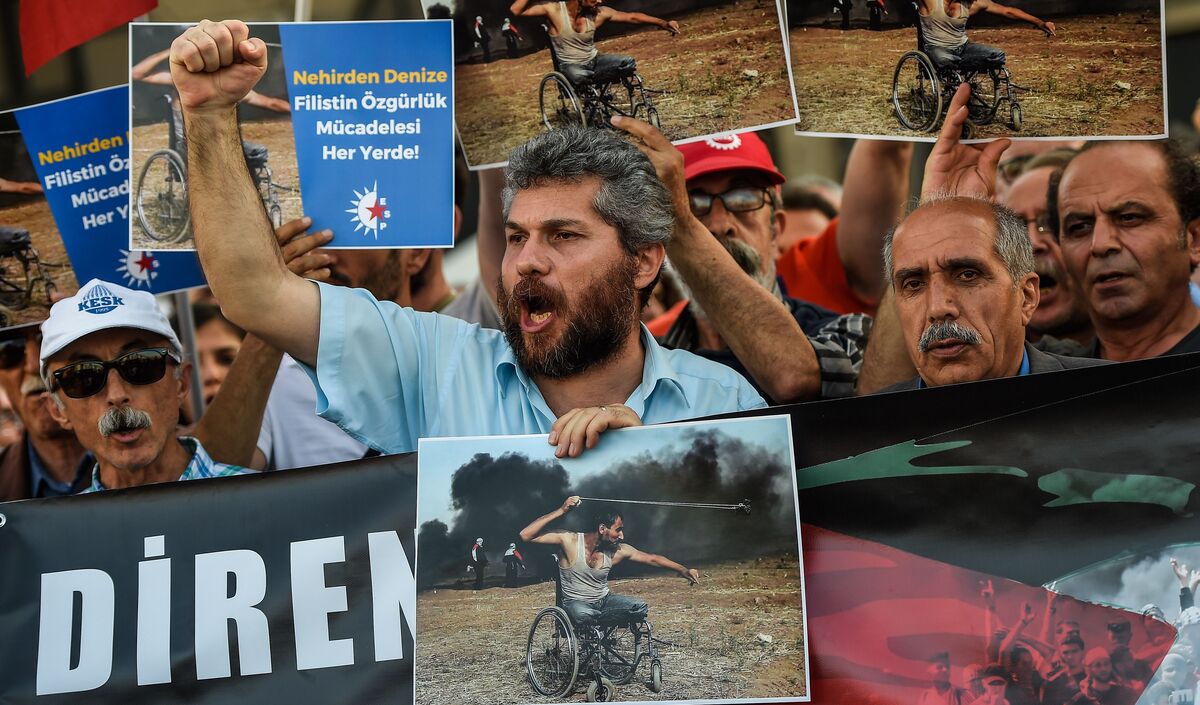 Turkish demonstrators bear signs proclaiming their solidarity with the Palestinians during a rally Tuesday in Istanbul. Turkey’s leftist opposition party called the demonstration to protest the killing, the day before, of dozens of Palestinians during clashes with Israeli security forces.

The response from Istanbul was among the swiftest — and most intense.

The Turkish Foreign Ministry told Israel’s ambassador to the country, Eitan Na’eh, that it would be “appropriate” for him to return to Israel, according to Turkey’s state-run Anadolu news agency, which cited unnamed diplomatic sources.

But Reuters reports that the Israeli Foreign Ministry quickly responded in kind, expelling the Turkish consul-general in Jerusalem — and Netanyahu responded to Erdogan’s words with a fiery statement of his own.

“Erdogan is among Hamas’s biggest supporters and there is no doubt that he well understands terrorism and slaughter,” Netanyahu said, referring to the Islamist organization that serves as Gaza’s de facto ruler and that the U.S. and Israel deem a terrorist group. “I suggest that he not preach morality to us.”

Not long afterward, Erdogan delivered his rebuttal on Twitter.

“Hamas is not a terrorist organization and Palestinians are not terrorists. It is a resistance movement that defends the Palestinian homeland against an occupying power,” Erdogan tweeted. “The world stands in solidarity with the people of Palestine against their oppressors.”

Meanwhile, away from the high-level tit-for-tat, Turkish protesters gathered in Ankara and near the Israeli consulate in Istanbul, bearing signs and chanting pro-Palestinian slogans. And three of Turkey’s major political parties, both governing and in the opposition, signed on to a joint statement condemning the “massacre” of Palestinians on Monday.

“The South African government condemns in the strongest terms possible the latest act of violent aggression carried out by Israeli armed forces along the Gaza border,” the African nation announced Monday, adding that the victims had been “taking part in a peaceful protest against the provocative inauguration of the US embassy in Jerusalem.”

And the country backed up its verbal condemnation with a concrete action — recalling its ambassador to Israel, Sisa Ngombane, “until further notice.”

“As we have stated on previous occasions, South Africa reiterates its view that the Israeli Defence Force must withdraw from the Gaza Strip and bring to an end the violent and destructive incursions into Palestinian territories,” the country said in its statement. “South Africa maintains further that the violence in the Gaza Strip will stand in the way of rebuilding Palestinian institutions and infrastructure.”

Hundreds of protesters descended on Johannesburg and Cape Town on Tuesday, marching through city streets and shouting “Free Palestine!” outside Israeli and U.S. diplomatic buildings.

“We think about those families and people who are trying just to live a normal life,” the Rev. Canon Desmond Lambrechts told local media at one of the rallies. “Irrespective of race, color or creed,” he said he hopes that God’s “powers, through us and others, will intervene in those situation.”

The political alliance supported by Sadr, a religious figure who led militants against U.S. forces in the Iraq war, won what appears to be a majority in parliamentary elections earlier this month. That result is likely to make Sadr something of a kingmaker in the country’s new governing coalition — and Arraf reports that he was quick to call on his supporters to condemn the U.S.

She notes that Sadr described the decision to move the U.S. Embassy to Jerusalem as a “hostile act” and said “he hopes for decisive Moslem reply.”

The Kingdom of Saudi Arabia, which has lately emerged as a key U.S. partner in the Gulf region, nevertheless condemned the decision to move the U.S. Embassy to Israel when it was announced late last year.

And on Tuesday, the kingdom expressed its “strong condemnation and denunciation of the deadly targeting by the Israeli Forces of Occupation of unarmed Palestinians.”

Attributing its statement to “an official source,” the country reasserted its “firm stance towards the Palestinian cause and support of the Palestinian people in restoring their legitimate rights in accordance with the legitimate international resolutions and the Arab Peace Initiative.”

Guatemala was among nine countries, total, to vote against a U.N. General Assembly resolution last December that censured the U.S. for recognizing Jerusalem as Israel’s capital.

And the country spent the day in a fashion markedly different from its counterparts around the world — by preparing to follow in American footsteps and move its own embassy to Jerusalem, as well. Guatemalan President Jimmy Morales arrived in Israel ahead of the country’s planned opening of its embassy on Wednesday.

By Tuesday night, city authorities had projected images of the Guatemalan, U.S. and Israeli flags on Jerusalem’s Old City walls.

“Guatemalan embassy, welcome home!” Jerusalem’s Israeli Mayor Nir Barkat said, according to local media, adding that other countries should “”join the United States and Guatemala—do the right thing and bring your embassies to the Jerusalem, our eternal capital!”