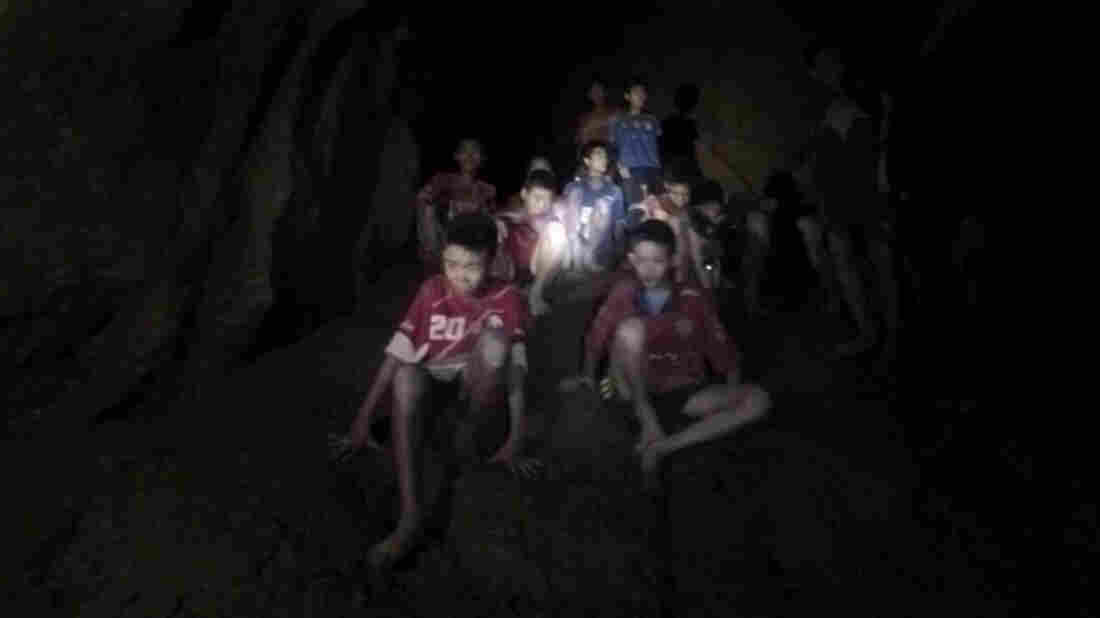 The boys and their soccer coach, seen in partially flooded cave in northern Thailand on Monday. Found after more than a week of searching, they are mostly in stable medical condition and have received high-protein liquid food, officials said Tuesday. Tham Luang Rescue Operation Center/AP hide caption 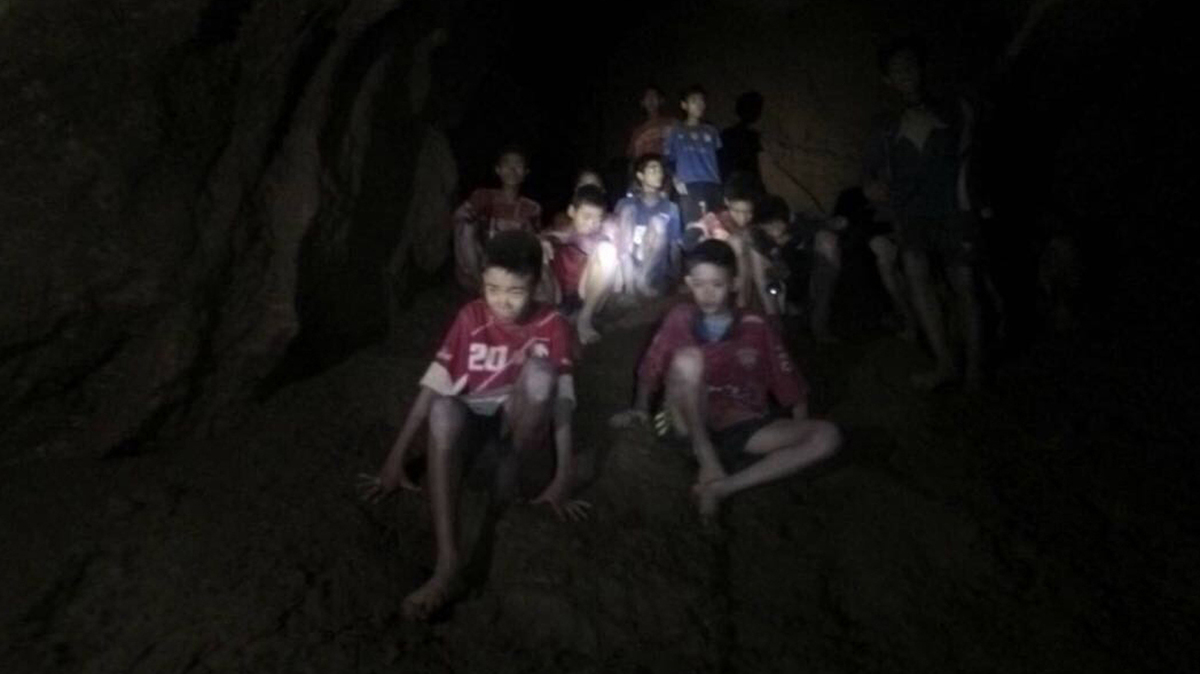 The boys and their soccer coach, seen in partially flooded cave in northern Thailand on Monday. Found after more than a week of searching, they are mostly in stable medical condition and have received high-protein liquid food, officials said Tuesday.

When volunteer British divers managed the remarkable late Monday night, finding 12 Thai boys and their soccer coach stranded on a ledge more than a mile into a complex cave system, they were greeted with a chorus of thank yous — and one very difficult question. It came from the mouth of a lanky boy who had just spent nine days with his teammates stranded in darkness a half-mile below ground.

“When can we leave?”

Simple as that question may be, the difficulty of its answer came into stark relief as the sun set Tuesday over Chiang Rai, home of the labyrinthine passages of Tham Luang Nang Non cave. The boys and their 25-year-old coach face two main options for survival: either learn to dive their way out of the cave, or wait until the waters that flooded it finally begin to recede.

With the end of the rainy season still several months away, one of those options has clear advantages over the other: Waiting for things to dry out just “sounds a little untenable,” journalist Michael Sullivan tells Here & Now from Chiang Rai, where he is following the rescue efforts.

That does not mean the alternative — teaching the boys how to dive — presents a much easier prospect.

“Although water levels have dropped,” says the British Cave Rescue Council, the volunteer divers’ small charity organization, “the diving conditions remain difficult and any attempt to dive the boys and their coach out will not be taken lightly because there are significant technical challenges and risks to consider.”

The council had sent its divers on the request of Thai authorities. Bill Whitehouse, the group’s vice chairman, tells NPR’s Ari Shapiro that the call last week even came with flight tickets — “so they had to rush around, finish getting their kit together and get themselves down to [London’s] Heathrow Airport ready to fly out.” 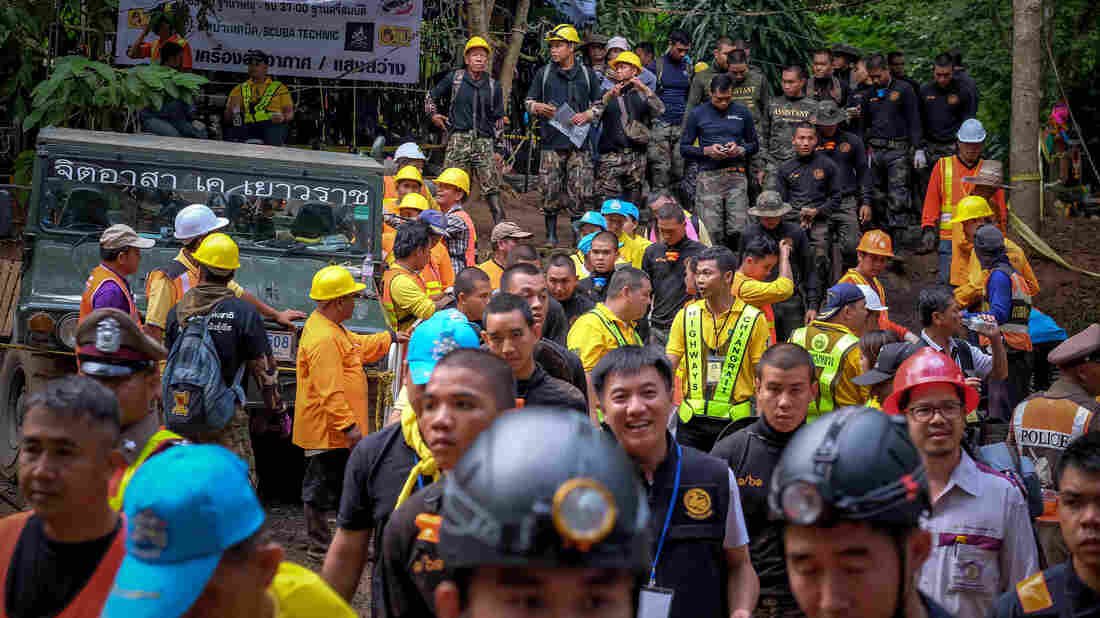 Hundreds of rescuers gather outside the cave Tuesday in Chiang Rai to help load equipment and aid efforts to rescue the 12 boys aged 11 to 16 and their 25-year-old coach. Linh Pham/Getty Images hide caption 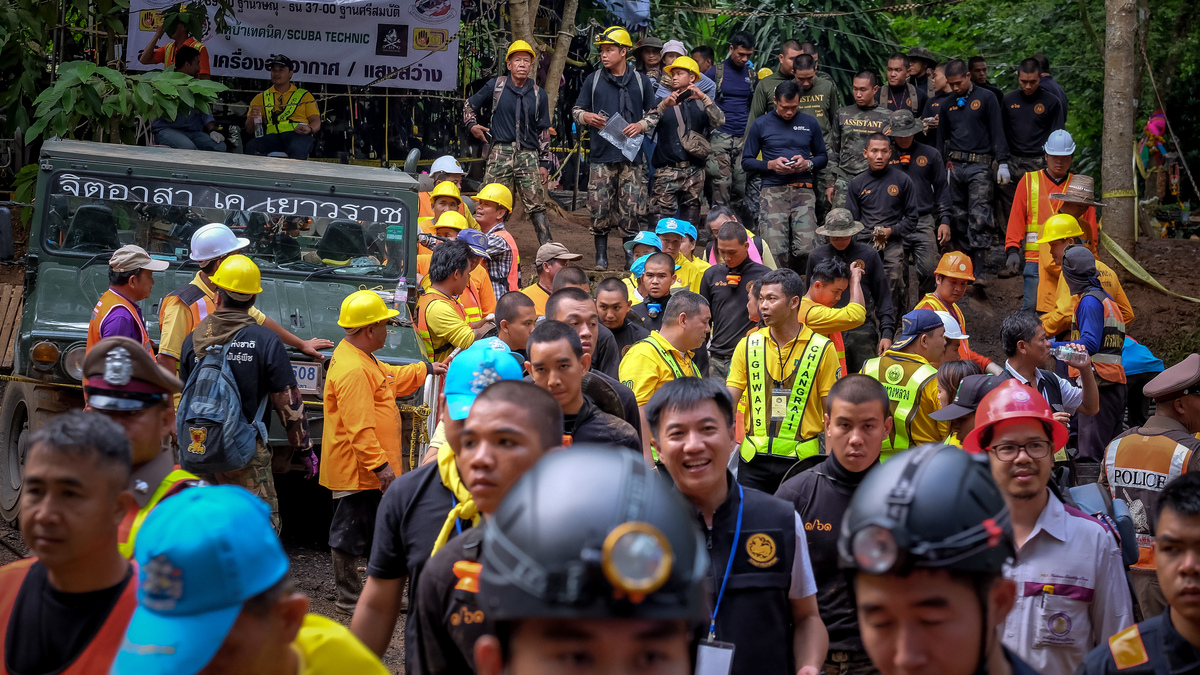 Hundreds of rescuers gather outside the cave Tuesday in Chiang Rai to help load equipment and aid efforts to rescue the 12 boys aged 11 to 16 and their 25-year-old coach.

But now that the boys have been found, Thai navy SEALs have been leading efforts to ferry them out, with the aid of diving lines laid between the boys and the cave entrance.

Those lines are now helping the boys get essential food and medical supplies — and soon, they may be relied upon to get them out entirely.

“These are really, really small spaces that these [rescuers] had to get to, to get to the kids in the first place. And you have to worry about these kids freaking out a little bit,” Sullivan explains. “My guess is … they’ll have two divers on either side of each boy, and they’ll have the divers guide them down the ropes to the entrance to the cave.”

But if that is the avenue rescuers intend to take, they will first need to wait for the boys to regain their strength. After more than a week without food, they have lost energy and muscle.

And so Rear Adm. Arpakorn Yookongkaew, commander of the Thai navy SEALs, told local media that they have been concentrating on supplying the boys with “easily digested and high-powered food with enough minerals.” He said Tuesday that seven members of his unit, including two medical professionals, are now with the boys and their coach inside the cave, according to The Bangkok Post.

As they wait, the BBC’s Howard Johnson reports, more than 2,500 gallons of water per hour are being pumped out of the cave in order to ease the boys’ dive out. But the operation, even at its present scale, is likely to falter in the face of downpours expected later this week.

It is partly that torrential forecast that has Interior Minister Anupong Paojinda eager to get the boys out before much more time passes.

“The evacuation must speed up,” he said, according to The Bangkok Post. “If the water rises, the task will be difficult. We must bring the kids out before then.”

The matter is complicated, he added, by the fact the boys don’t know how to swim.

Yet U.S. Air Force Capt. Jessica Tait, who is part of the American military contingent helping near the cave, tells ABC News that the boys have already proven they have the mettle necessary to make the arduous trek to the surface.

“Really, when you think about it — nine days in complete darkness, no food,” Tait says. “When I think about that mental will to live, these boys have it.”